U.S. stock indexes late-morning Thursday extended gains to a fourth straight day, testing fresh records, but off their highest levels, after the Federal Reserve signaled that Policy easing may be forthcoming.

TSPSC RIMC Syllabus & Exam Pattern 20…
Prepare For Victory
How To Find Your Purpose And Passion …
CBD 2020: What to Expect + Our Top Pr…
From Newbie to Digital Marketing Expe…

What’s driving the market?
Federal Reserve Chairman Jerome Powell on Wednesday strongly implied that the central bank would cut benchmark interest rates, currently at a range of 2.25%-2.50%, in the coming weeks if the economic outlook buffeted by U.S.-China trade tensions doesn’t show signs of improvement.

“The case for somewhat more accommodative policy has strengthened,” Powell said at a news conference on Wednesday to discuss the rate-setting Federal Open Market Committee’s highly anticipated decision. Policy makers kept rates unchanged as Expected but removed the word “patient” from its updated policy statement, suggesting that it is ready to act soon.

Although markets have been widely anticipating that the Fed would respond to growing signs of stress in the economy, the central bank’s posture on looser monetary policy was seen as providing a strong case for the continued rise in stocks despite concerns about lurking economic problems.

The Fed remained mostly optimistic about the outlook, but said inflationary pressures have receded, compelling it to lower its forecast for PCE inflation in 2019 to 1.5% from 1.8%, below its 2% target. At the same time, it left its gross domestic product estimate at 2.1%.

Curiously low inflation has been often cited by FOMC members as one of the key reasons for its doubts about its monetary policy path. The Fed next meets July 30-31, while President Donald Trump is expected to speak to Chinese President Xi Jinping on the sidelines of the coming Group of 20 meeting of well-developed nations in Japan in late June, where a detente on trade policy could be reached.

Dovish rhetoric from central-bank policy makers across the globe this week has helped to send commodity prices, and particularly gold, rocketing higher, with heightened expectation that interest rates, which can undercut appetite for bullion, will could be lowered.

Bank of Japan Gov. Haruhiko Kuroda and the Bank of England on Thursday, joined the chorus of bankers including Powell and European Central Bank President Mario Draghi, signaling a readiness to increase stimulus should global risks at least partly spurred by trade, worsen.

The BOJ’s Kuroda said “we’ll of course consider expanding stimulus without hesitation,” he told a news conference, according to Reuters.

Which data are in focus?
The Philadelphia Fed manufacturing index in June fell to just 0.3 after registering a four-month high of 16.6 in the prior month. Any reading above zero indicates improving conditions. Economists polled by MarketWatch expected an 8 reading.

Initial jobless claims, a rough way to measure layoffs, fell by 6,000 to 216,000 in the seven days ended June 15, the government said Thursday.

What are strategists saying?
“Powell’s press conference [on Wednesday] showed some reluctance, but it seems markets are certain the Fed will cut in July. If data deterioration is worst than expected, calls for a 50-basis cut at the July meeting will grow in the coming weeks,” wrote Edward Moya, senior market analyst at Oanda in a daily research note.

Which stocks are in focus
Slack Technologies Inc. WORK, +0.00% is set to make its debut on the New York Stock Exchange in an unusual direct listing of the enterprise software company. Here’s what you should know. The direct listing was expected to hit just before 1 p.m. Eastern time.

Crude-oil prices CLU19, +5.40% surged, up more than 5% amid geopolitical tensions in the Middle East. Iran says it shot down a U.S. drone in its airspace and Trump issued a cryptic tweetm saying that Iran “made a very big mistake.” 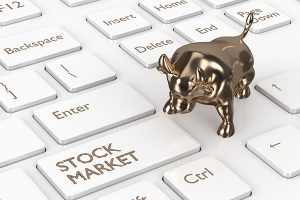