This evening we have another heavyweight bout on the cards, with Microsoft, Facebook, Tesla and Boeing all reporting. While concerning, Boeing’s woes are unlikely to spoil the party, with the US economy V8 big block apparently firing on all cylinders. The US bond Market is also falling into line since the inversion scare of last month, with the yield curve continuing to slope gently upwards. This should be positive for US bank earnings in Q2.

The US dollar unsurprisingly (to me anyway) continues to outperform as other parts of the world look on enviously. The greenback keeps rising against the majors, most notably the euro (EUR) and the British pound (GBP). With the exception of petro-currencies, the story is the same across Tier 2 countries and also emerging markets. The exception being Canada where the CAD fell ahead of what is expected to be a dovish central bank rate decision this evening.

Apart from being this year’s high-yielder of choice, the dollar will be supported by Higher Oil prices. The maths is simple: most oil transactions are conducted in US dollars. The higher oil goes, the more dollars need to be bought to pay for it. With the US economy seemingly humming along on in a moderate inflation nirvana, oil producers are unlikely to be looking far for places to reinvest.

On Monday Taiwan exports fell by a higher than expected 9.0% for March and followed this up yesterday with lower than forecast retail sales and industrial production. Singapore’s March inflation also came in below expectations at 1.40%. This follows previously weak export data from both Singapore and South Korea. While the world speculates on the longevity of China’s latest stimulus hit, it’s essential to realise that not all parts of the world are performing as gloriously as the US and China at the moment. A casual glance at Europe and Japan should reinforce that notion, and this divergence likely explains the dovish tendencies of central banks globally.

Today’s highlight in Asia will be this morning’s Australian CPI data at 0930 Singapore time. Despite employment holding up, the Reserve Bank of Australia (RBA) is faced with a slowing housing market and stubbornly-low inflation – the latter being a familiar conundrum to many central banks around the world. An undershoot of the 1.50% expected print will see the rate cut noise rise to a cacophony and add to the downward pressure on the currency.

The US dollar continues to reign supreme against the majors, and we see no reason for this to change in the immediate future. The EUR has sunk to 1.1220 this morning as Brussels can only look across the Atlantic in envy. The GBP continues to sag, trading at 1.2935 this morning, weighed down by Brexit inaction and a possible leadership coup.

Emerging markets have become rather more interesting following the continued oil rally. Petro currencies such as the Mexican and Columbian pesos have outperformed while non-oilers such as the South African rand (ZAR) have not. Asia has yet to see this flow into the Indonesian rupiah (IDR) and Malaysian ringgit (MYR) – the latter releasing inflation data today – but we could yet see divergence among the emerging market currency block going forward.

Not much to say here today, the performance of Wall Street should be a green light for regional stock markets to track higher this session. Higher oil prices have somewhat surprisingly, failed to dampen the enthusiasm of Asian markets. In all likelihood, with attention focused on Wall Street earnings, this will be the story for another day.

Oil continued its Iran-induced ascent overnight. Brent Crude climbed 0.60% to USD74.50 a barrel and WTI rose an impressive 1.15% to USD66.30 a barrel, both six-month highs. The black gold was supported by rumours that Saudi Arabia would not necessarily open the oil spigots to make up for an Iranian shortfall, preferring to wait until it saw concrete evidence of such demand.

Gold remains mired in a USD1,270.00/1,275.00 per ounce range, supported by geopolitical tensions on one side, and capped by a strong dollar and buoyant equities on the other. Until this status quo materially changes, gold is likely to remain the forgotten man of the investment world. 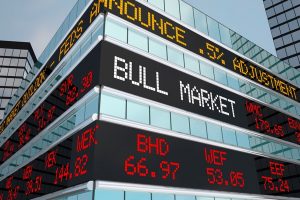