Udta Punjab Actor Diljit Dosanjh Owns A Private Jet And The Pictures Will Turn You Green With Envy! 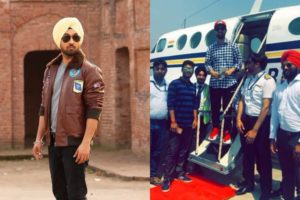 Udta Punjab actor Diljit Dosanjh is touching new heights with each passing day and this time, he has touched the sky. Yes, the rockstar recently gifted himself a private jet and shared the news with his fans on Twitter. Diljit Dosanjh took to Twitter and posted a picture of his jet and captioned it, “New Beginning Starts With Private Jet”

Diljit also uploaded a video with the pilot and co-pilot and wrote, “Thug Life Jet Life”

With just two Bollywood flicks— Udta Punjab and Phillauri, Diljit Dosanjh has taken over Bollywood like a boss and is also winning back to back awards. Definitely, Diljit is enjoying this new successful phase of his life.

On the work front, Diljit is prepping up for his Dream Tour, which will take place in the month of May. He will be performing in Vancouver on May 6, in Edmonton on May 13, in Winnipeg on May 17, and in Toronto on May 22, 2017.

Also, the first look of Diljit Dosanjh’s superhero film is out. Produced by Balaji Telefilms, the singer turned actor recently shared the first look of Super Singh on his twitter handle. Also, reports suggest that Anushka Sharma might be approached to play the female lead of the film. However, there is no confirmation on it as of yet.

Diljit Dosanjh is also roped for one more Anushka Sharma’s production banner movie titled ‘Kaneda’. The movie stars Anushka Sharma and Arjun Kapoor too. The film will reportedly release in 2018. This Punjabi thug is quietly making his place his place in Bollywood and we see him as the next big thing to happen in Bollywood.

The post Udta Punjab Actor Diljit Dosanjh Owns A Private Jet And The Pictures Will Turn You Green With Envy! appeared first on Eventznu.com.

Udta Punjab Actor Diljit Dosanjh Owns A Private Jet And The Pictures Will Turn You Green With Envy!