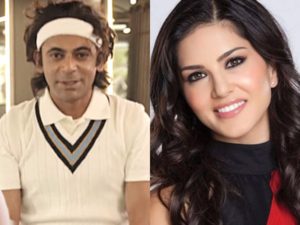 Post fight with Kapil Sharma, Sunil Grover is coming up with news things and is planning to come up with unique projects. Reportedly, his latest project is going to be with Sunny Leone. Surprised? So are we! Get ready to witness Sunil Grover in a brand new avatar. The comedian star shared a video on twitter and is seen dressed up as a cricketer. He announced his brand new project with none other than Baby Doll, Sunny Leone.(Also Read: Sunil Grover aka Mashoor Gulati Makes A Comeback On TV Show But With A Twist)

The comedian has announced that he is all set to make an appearance on an app-based commentary of the IPL match scheduled on April 13 for UC news. In the short clip, Sunil is seen sitting on an exercise ball and hints about teaming up with Sunny Leone for IPL.

Sunil took to Twitter to announce his new initiative and wrote, “The favourite of them all, fans call her Baby Doll. Guess who’s gonna join me for #MasalaCommentary on @UCNews_India.”

The favourite of them all, fans call her Baby Doll. Guess who’s gonna join me for #MasalaCommentary on @UCNews_India https://t.co/5AxBGWyFAh

Well. this would be the much-awaited appearance of Sunil Grover after his huge fight with Kapil Sharma. Ever since his fight with Kapil, Sunil Grover has stayed away from the television and is focusing on life gigs. He recently performed live in Delhi and then on Indian Idol.

So are you ready to see Sunil Grover in one of his old avatars or in a brand new one on Aril 13 with Sunny Leone?

This post first appeared on The Fashion And Beauty, please read the originial post: here
People also like
What you need to know to buy a house during pandemic
Reliance Jio 5G to Roll Out in Second Half of 2021, Confirms Mukesh Ambani
Prudhvi Raj Unlimited Back To Back Comedy Scene || Telugu Comedy Club
Why AES-GCM Sucks
MP Police Constable Recruitment 2020 Online Notification