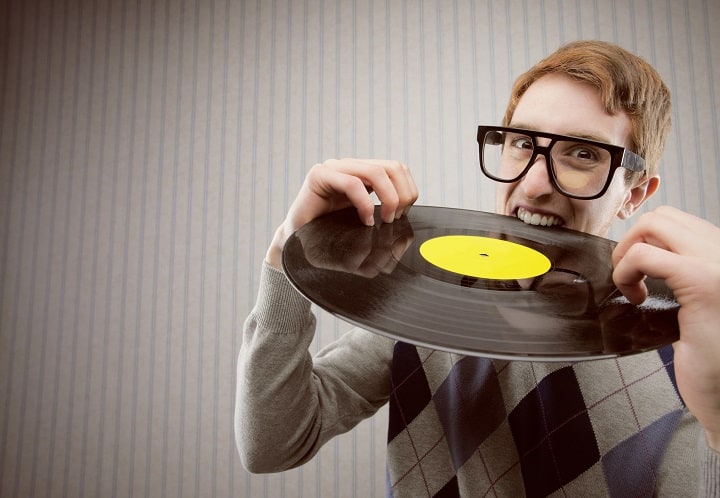 The 60s were indeed one of the most exciting periods in history for fashion. Men’s hairstyles saw very diverse styles emerge, from a clean, well-groomed look to an unkempt, quirk, or unconventional style.

It was a time for experimentation and it is evident from men’s hairstyles in the 60s. Let’s take a look at the most popular 60s hairstyles for men.

What Hairstyles Did Men Wear in the 60s

It is hard to define the hairstyles men wore in the 60s simply because there are so many of them, each more iconic than the next. The changes in trends were very rapid and men were very creative and experimental with their looks.

Mullets, slicked-back hair, geometrical cuts, hippie haircuts, dreadlocks, pompadours and ducktails were the most popular hairstyles worn by men in the 60s.

20 Most Popular 60s Hairstyles for Men

A pompadour needs a little length and volume. The hair on the sides is slicked back tightly, while the hair on top is sculpted with a lot of product. Those with short hair could alternatively go for a flat top.

If you think of getting a pompadour, investing in premium hair wax or styling hair clay would be a good idea.

A ducktail is a popular slicked-back hairstyle from the 60s. The hair is slicked back with a product and combed back from the sides. At the back, the hair that has been slicked back is styled and parted down the middle, which is why it looks like a duck’s tail.

A mod bowl cut is also known as a ‘mushroom’ cut or a ‘Beatle’ cut. It used to be sported by band members during the 60s because of the Beatles’ success. The hair is cut in a bowl shape and it hangs straight across your forehead and flows down at the back.

In a long geometrical cut, the hair is cut to shoulder length and the hair in the front forms a triangular shape before the ears and there are thick bangs that hang across your forehead.

This was another hairstyle made fashionable by the Beatles. The hair is cut straight, somewhat like a bob cut for men. You have a thick fringe in the front, which is usually styled to lean to the side rather than hang straight down.

The long hippie was pretty popular in the 60s. You need long, wavy hair left messy and a middle-parted fringe in the front. The messiness of the style gives more volume to the hair.

Afros were a trendy African American hairstyle during the 60s. The hair was very long and curly and the people wore it big and voluminous. It was styled to appear round. It was a very natural way to style African American curly hair. 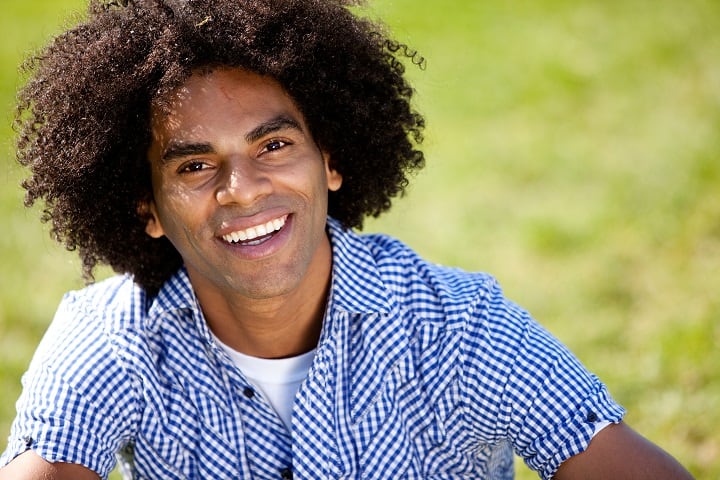 Dreadlocks are created by braiding or locking strands of hair together. They became popular in the 1960s because of Bob Marley and continued to stay in style well into the 70s.

Short and curly is a classic 60s hairstyle. Hair was kept messy, short and curly. It was usually sported with a handlebar mustache.

The length is kept throughout, but the hair is completely messed up to give a low-maintenance, carefree look. A well-trimmed mustache style makes you stand out even today.

This one was also made famous because Elvis favored it in the 60s. The hair is cut short and kept sleek on the sides and there are short bangs swept sideways across the forehead. You can give some lift to the hair on top to add some character to the look.

A hard part comb-over is achieved by parting the hair farther on the side so that the hair you comb over to the other side has more bounce and falls in waves. You can also add gel for better hold.

Elegant side part haircuts were trendy in the 60s, so it is no surprise that this look was all the rage back then.

A business hairstyle is a very relaxed and messy look, contrary to how it sounds. The sides are slightly shorter than the top. They are slicked with hair wax and the hair on top is messy.

This look complements naturally curly hair very well. The hair is cut to shoulder length, and the hair’s natural texture becomes the focus of the look. If you have loose curls, this will be an excellent look. 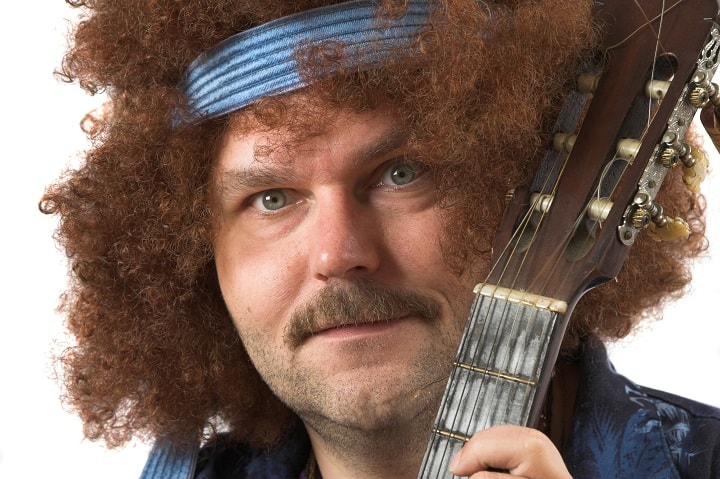 A slick back was a classic look even before the 60s and continued to remain one. It was usually for short hair, which was then brushed back and held in place with a lot of hair gel.

If you are experiencing hair loss, this might not be the best look. Try a powerful hair oil for men to reduce hair loss before attempting this look.

A crew cut is for those who like a clean yet stylish look. The hair is cut in a fade on the sides and the hair length varies from front to back. This is a short haircut with the longest hair in the front. The length keeps getting shorter as you move backward.

The hippies favored this look in the 60s. A long layered hairstyle has shoulder-length wavy hair cut in layers and left messy with bangs parted down in the middle. Having a lot of volume complements this look.

A grown-out mullet is exactly what it sounds like. The hair on the sides is even and shoulder-length, whereas the hair on top is shorter but still longer than the usual length. It is parted in the middle and left wavy.

Paul McCartney was well known for this classic mullet in the 60s. The hair is long and has only one layer—the top is much shorter than the rest of the hair. Bangs mainly accompany it and the hair is kept messy and wavy.

A shag involves slightly longer hair and the hair in the front is kept side-swept. The look is very natural and messy. The hair’s natural texture is very prominent, and there is no styling or product involved.

Elvis Presley’s hairstyle was the original pompadour. The hair on top is a little bigger and styled in a pompadour using many of the world’s best hair gel. The sides are slicked back and kept utterly flat.

If you’re thinking of picking a slicked-back hairstyle but want to add some drama to it, you should consider Elvis Presley’s hairstyle.

The decades before the 60s favored the clean-cut image and there wasn’t a lot of experimentation in style or fashion. The 60s were kind of a revolution where people rebelled against this image and grew their hair. 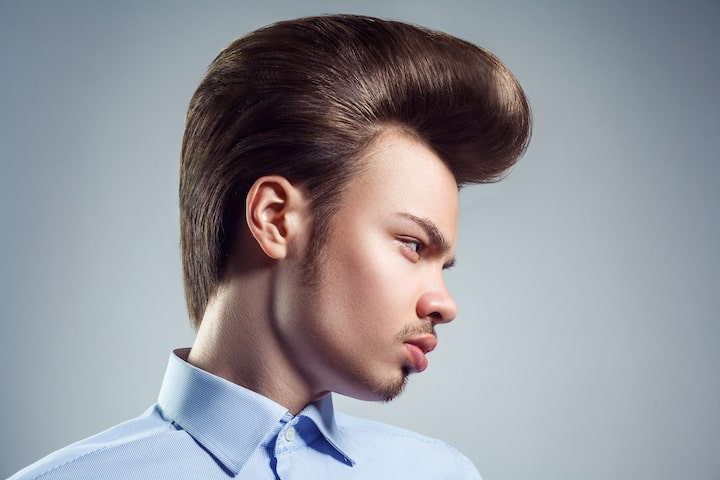 What hairstyle was the most popular for men in the 60s?

The mop-top was perhaps the most popular hairstyle for men during the 60s, primarily because of the popularity of the Beatles.

Were braids popular in the 60s?

Since long hair was in fashion, braids were quite popular in the 60s, especially among African-American men.

How did black men’s hairstyles change in the 60s?

The ‘Black is beautiful’ movement started gaining traction in the 60s, so black men started embracing the natural texture of their hair. Afros and dreadlocks were the most popular hairstyles among black men with naturally curly hair.

Did guys have long hair in the 60s?

Which hair products were used in the 1960s?

Hair gel, pomade and hair wax were the most widely used hair products in the 60s, used chiefly for slicked back hair or pompadours.

What is a Beatle haircut?

Beatle haircuts were initially called the ‘Arthur.’ It involved a mop-top with textured hair and people usually sported it with slim-fit suits and Chelsea boots.

If you want to sport the Beatles look, check out non-slip Chelsea boots for men and get a mop-top haircut. Tread with caution, though, because not everyone can pull it off.

The 60s were a very innovative time, especially for men’s hairstyles. If you want to know the most popular hairstyles of the time, check out our list of the 20 best hairstyles for men.