20 Deep-Rooted Beard Myths Busted Once and For All

Up to 87% of men believe in one or more beard myths.

That’s what we found out after going through numerous studies and research in recent years.

There’s a myth out there on anything beard-related.

That wouldn’t be such a big deal if it wasn’t for men who still believe in them, causing them to shave their beards, buy expensive products that do nothing or give up on growing Facial Hair forever.

Get ready for the pure truth as we uncover the facts behind the 20 deepest-rooted facial hair myths out there.

Myth #1: Hair grows back thicker after shaving it 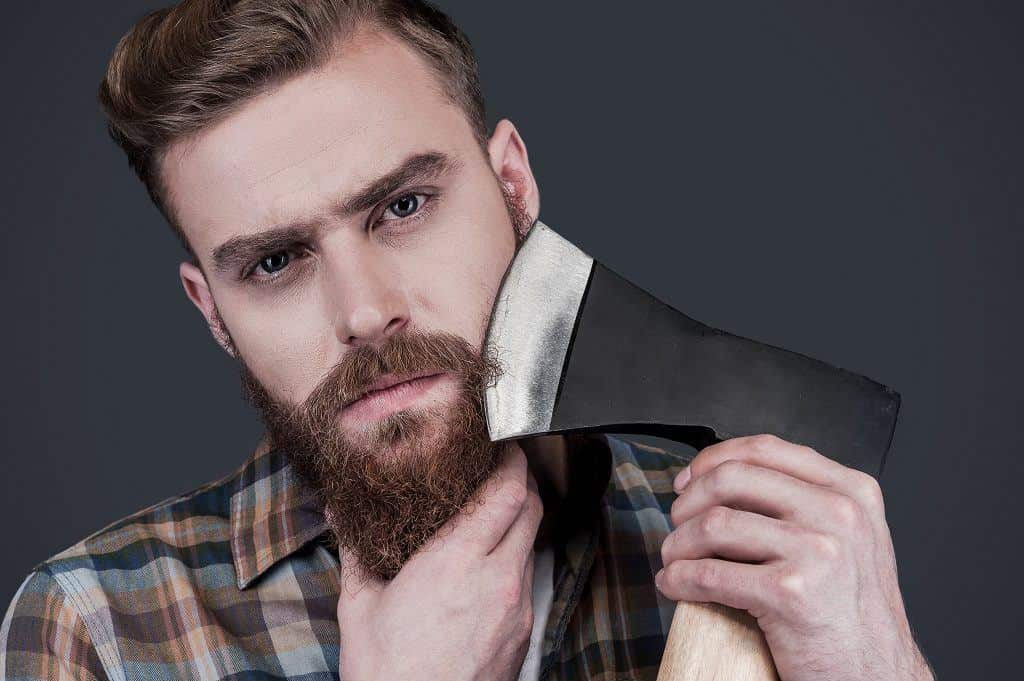 One of the biggest beard myths when it comes to facial hair or even beard growth, in general, is that the hairs grow back thicker after you shave them.

The facial hair looks darker and feels thicker, so how couldn’t it be, right? False. As it happens, hairs grow back with a dull end after you shave them and they might feel scruffy or coarse.

While it appears and possibly even feels darker or thicker, it’s not.

It’s a popular myth that all the women are looking for a man with a sexy beard, but this isn’t always the case. 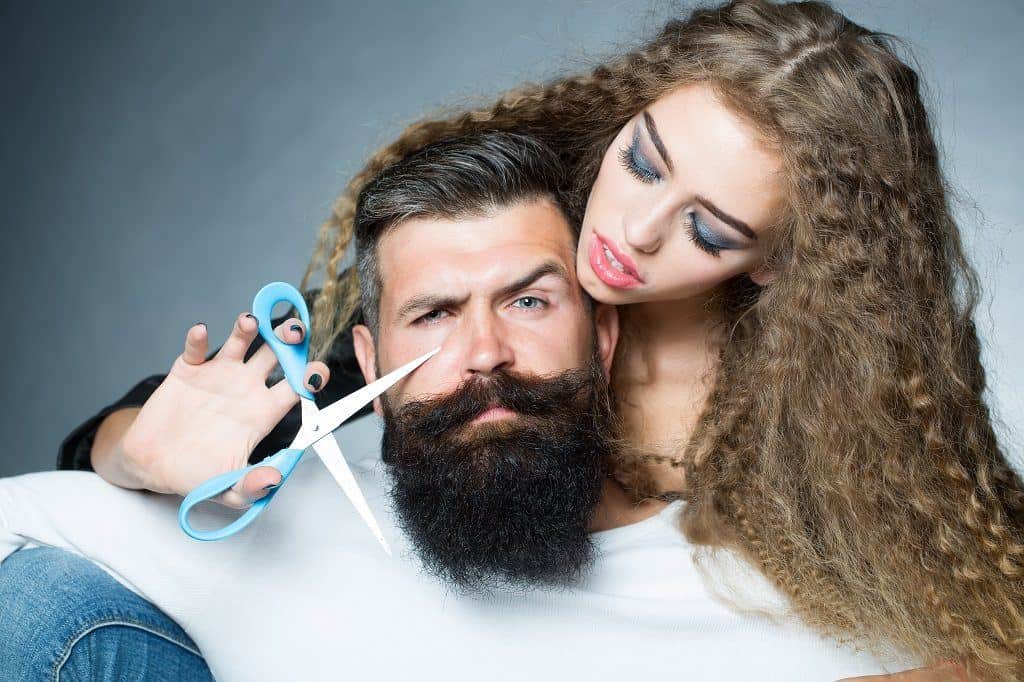 Regardless of the beard styles you try, some girls just don’t find facial hair attractive, while for others, it’s practically a necessity in a partner.

Still, some girls prefer the clean-shaven look or don’t like to kiss rough and itchy facial hair.

However, with the right beard grooming products and techniques – and by keeping your facial hair moisturized with a premium beard oil, you can give your beard that sexy, touchable softness that so many women love.

Myth #3: A beard should look complete in 2-3 weeks

While the world we live in would be wonderful if this was true, alas, a beard can’t grow completely in as little as two to three weeks.

In fact, quite the contrary, your beard may take as much as two to three months to grow out. In some cases, it may take even longer.

By age 20, many men feel like their beard is as good as it is going to get – and, fortunately, this is not the case.

Or many of us would be walking around with some pretty patchy beards (not that there’s anything wrong with that).

The truth is, your beard will keep improving throughout your 20s and 30s, and often into your 40s and 50s. Many men are well into their 20s before their beard fills in all the way.

Myth #5: You should shave for a job interview

For many, it’s s common practice to shave a beard before a job interview – so much effort and hard work right down the drain (literally). 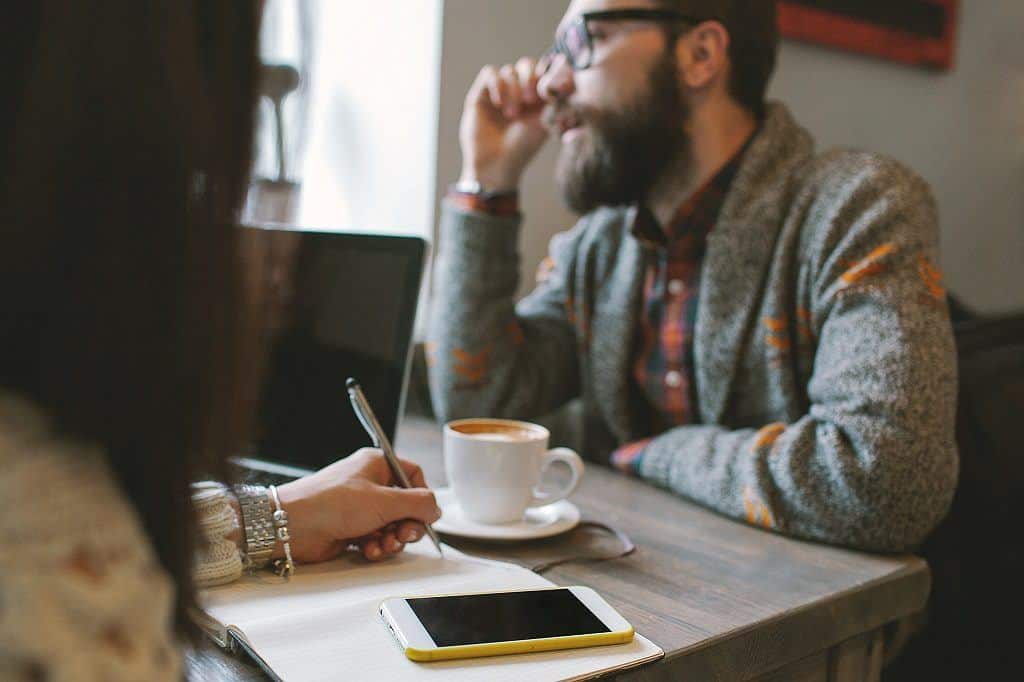 It’s simply devastating for many of these men to hear that this practice was all for nothing, but in most cases – unless the company is strictly anti-beard – you will not be discriminated against for having a beard, as long as it is nice and well-groomed.

Myth #6: Beards are hot in the summer

This is one of the most common beard myths, possibly because beards look like they keep you pretty warm.

The truth is, though, that beards can actually help cool you down in the summer by shading your face and acting as an evaporative cooler when you sweat.

Myth #7: Your beard makes you look homeless or creepy

If your wife or girlfriend says this to you shortly after you start a beard growth journey for the first time, don’t be alarmed. 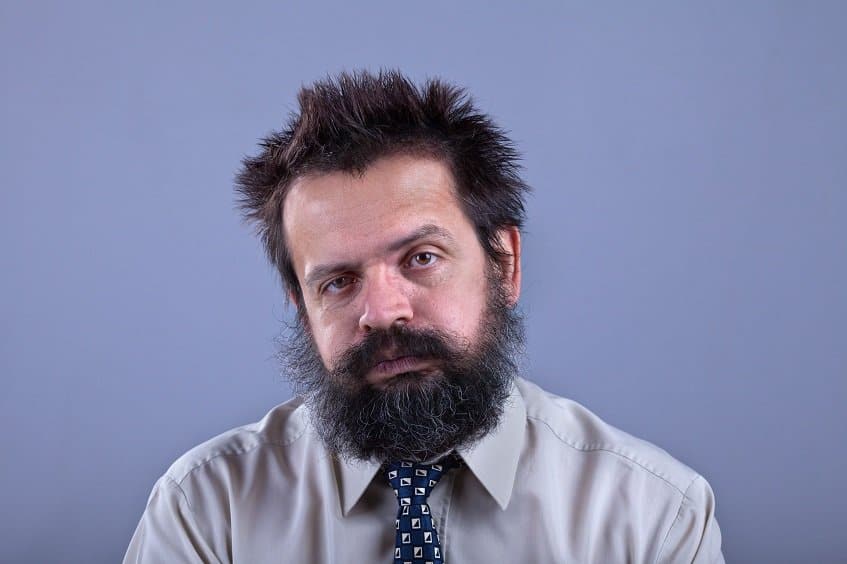 In all likelihood, she is simply shocked by the change and is not used to seeing you with a beard. With time, she will likely come around and it will begin to grow on her as much as it has grown on you.

However, if you are truly concerned that your beard makes you look homeless or creepy, you might want to consider a more cleanly-groomed beard style to see if that helps the situation.

Myth #8: A good beard must have the mustache

If you pay attention to the bearded men you see on a daily basis, you will notice that an overwhelming number of them are sporting facial hair without the mustache.

And you’ve probably never thought to yourself that someone’s beard would look pretty nice if they only had the mustache too.

You probably only notice the lack of mustache on yourself because you are your own biggest critic. Make an effort to see your beard as a whole and how it complements the rest of your style.

When many people think of beards, the image that they immediately conjure into their minds tends to be one of a smoldering, dark-haired man with a full beard. 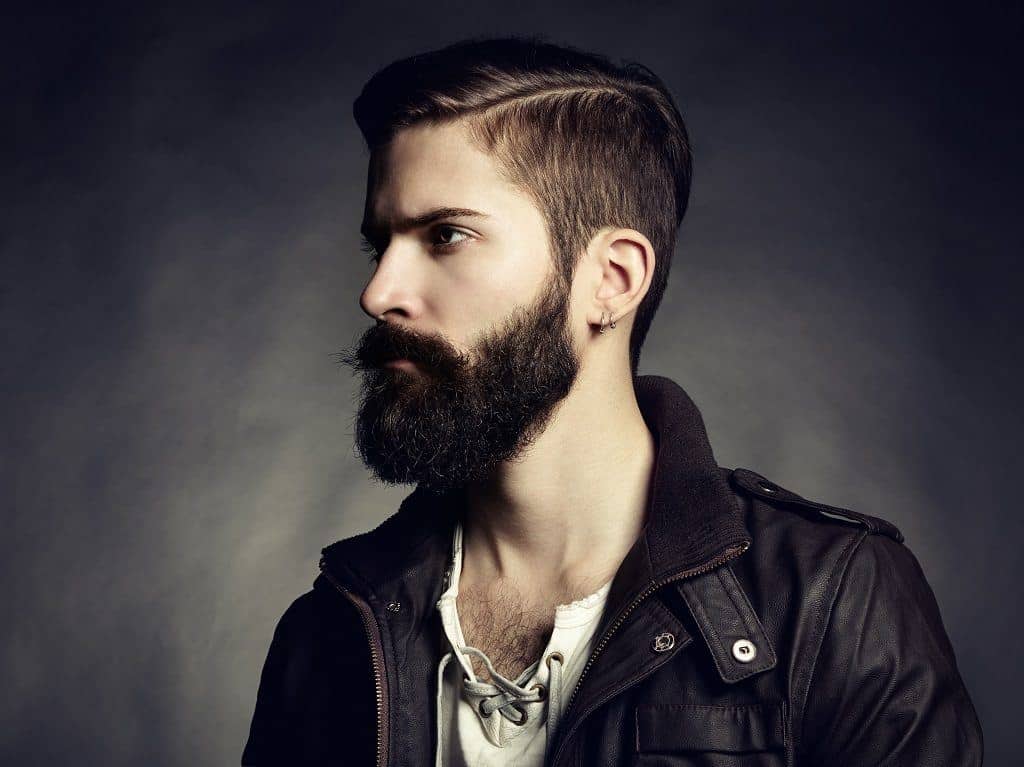 However, fair-haired men are just as capable of excellent beard growth, especially once they have gained some length to show off.

Once their beard growth is long enough to catch the sun’s rays, they’ll see the difference it can make to have a longer, lighter-colored beard.

Myth #10: Facial hair genes come from the mother’s side

It’s a commonly held belief that beard inheritance, including beard growth, density, pattern, and color, comes from the mother’s side.

However, in reality, these genes come from both the mother and the father too. The basis for beard myths like this one stems from the fact that many believe the “baldness gene” comes from the mother and this belief has been extended to cover beard genes.

Myth #11: You should get your beard trimmed by a barber

Many people have more confidence in having their beard trimmed by a professional, but in truth, there is no better professional at knowing your personal preferences than yourself. 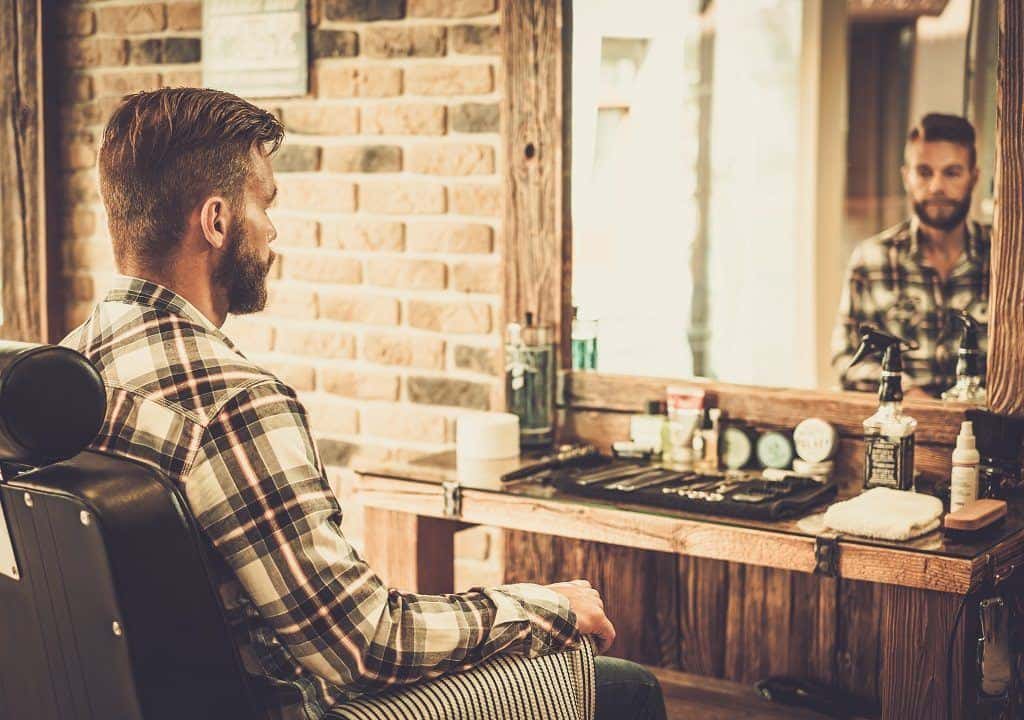 More often than not, a barber will over trim your beard, especially if you are not very clear about your desires.

The best method, in general, is to get your own beard trimmer and take off a small amount of facial hair at a time until you are happy with the results.

While doing this, however, be cautious and choose your style beforehand to avoid beard grooming mistakes.

Myth #12: Beards make you an outcast because most people don’t have them

Many men who are considering starting their beard growth journey feel as if they will not be accepted once they grow a beard.

However, you are who you are, and as long as you respect others’ choices, then your choices are your own.

People will accept your new look because it reflects your personality and nothing more.

Many people naturally have more than one color in their facial hair, and this often results in a fear that it doesn’t look quite right.

However, having multiple colors in your beard will make you look unique and distinguished in the eyes of all beard lovers.

Again, this is another classic case of you being your own biggest critic as no one else probably notices this or views it as a flaw.

Myth #14: Some products will permanently increase the density or coverage of your beard

There are products such as Minoxidil and others on the market that claim they can make your beard gain permanent improvements in density, coverage or even help kick-start the budding process in teenagers. 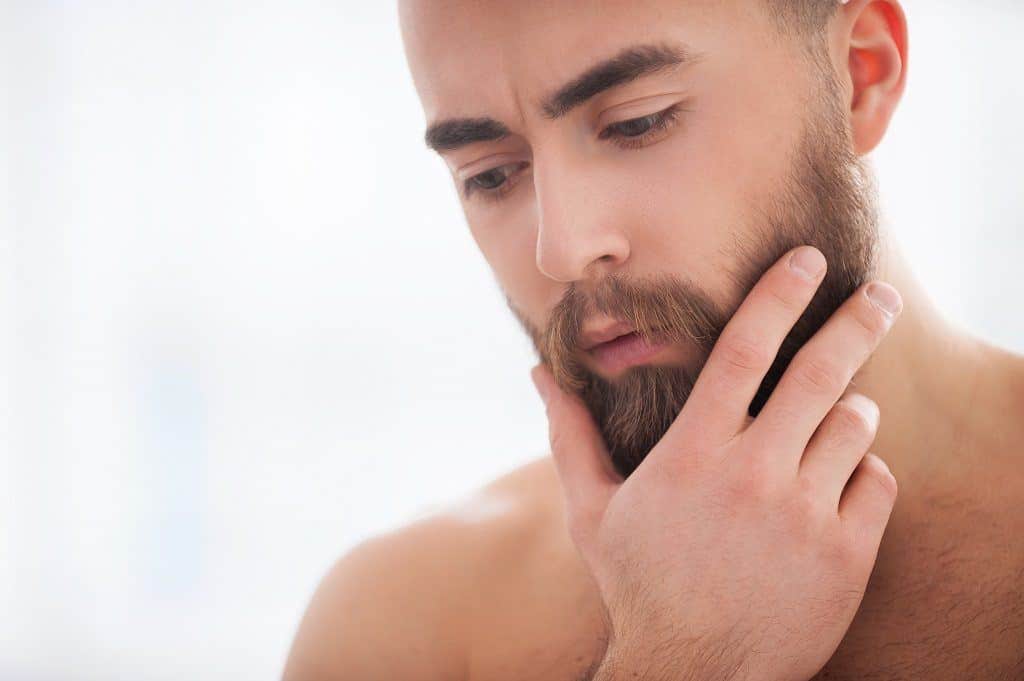 However, few products have been able to demonstrate any improvement in these areas, and Minoxidil has shown some success, but the gains are lost after participants stopped using the product, meaning the results are not permanent.

Myth #15: Growing a beard will present problems with a passport or other photo IDs

Some people shy away from growing a beard because they fear it would make traveling almost impossible because their photo ID shows them as clean shaven. 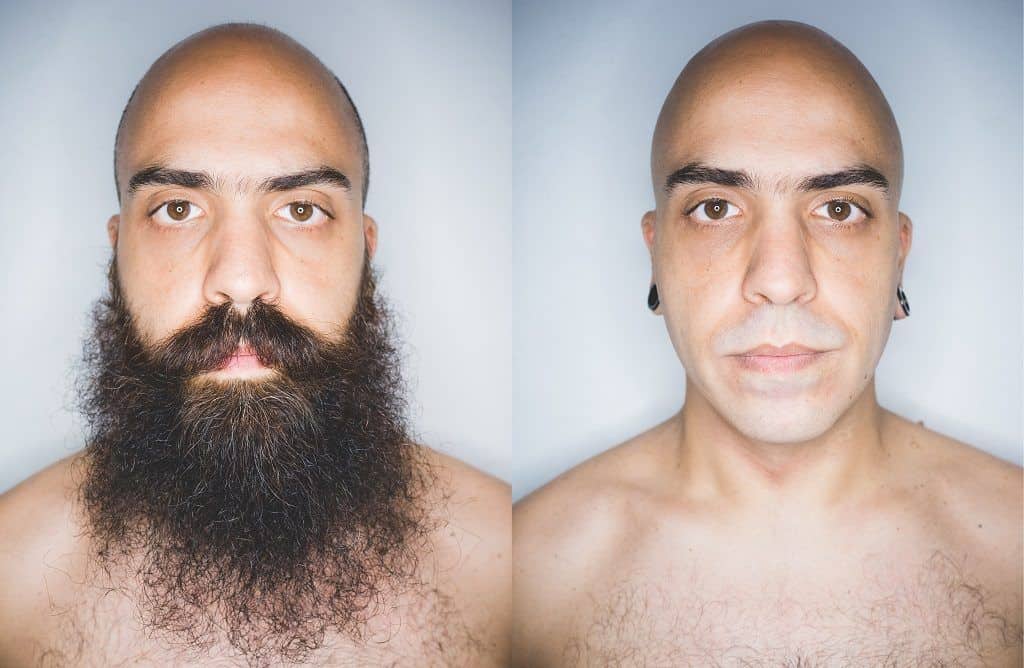 However, officials see hundreds of these IDs a day and have been trained to see past something as superficial as a new hairstyle or a beard.

Myth #16: You can’t grow a full beard with a bald area on your cheek(s)

Many men feel as if the bald areas on their cheeks won’t grow in and, therefore, forego trying to grow a beard altogether.

In truth, after 2-4 months of dedicated beard growth, these bald, light or weak spots fill over completely in the majority of cases and they’ll form a full beard.

If your facial hair looks wiry, you may think that growing a beard is not for you.

However, when wiry beards growth is fully finished, they typically can be very sophisticated and distinguished.

Once it’s fully grown in, if your wiry beard still needs taming, products such as beard balm can help.

Myth #18: All parts of your beard should grow at the same rate

This commonly held belief is simply not true. Cheeks often tend to grow a beard slower than the hairs covering your chin and there’s nothing wrong with that.

Your cheeks will catch up eventually and after a little trimming and shaping should look fully grown out within 2-3 months.

Myth #19: Beards are scratchy and uncomfortable

If your beard is itchy and scratchy, this is a sign that the skin under your facial hair is dry and in need of some moisture.

By using good beard oil, you can nourish your beard and the skin beneath to alleviate some of that itching.

In many cases, however, beard oil isn’t even necessary and the itching will pass after a week or two.

Myth #20: Beards are dirty and gross

For some people, when they look at a full beard, all they can think about are the dirt and germs that must lay within.

And it’s true that if you don’t clean your beard, it’s going to be dirty – but that’s true for the hair on your head, too.

So long as you clean your beard on a regular basis, it will stay perfectly clean.

Find the best beard trimmer to keep your beard neat and clean at all times!

The post 20 Deep-Rooted Beard Myths Busted Once and For All appeared first on Beardoholic.

This post first appeared on Beardoholic, please read the originial post: here
People also like
UNice Hair – Graduation Day Sale: Up to $40 Discount
Albania: Explore the Forgotten Side of Europe – 15 Best Things to Do in the Albanian Lands

20 Deep-Rooted Beard Myths Busted Once and For All