I used to be a drunken mess.

So, I used to be somewhat of a wino. I mean, recently. Like the past couple of years as I matured from PBR and .25 draft Beer nights on LBI, I decided to take up something a little bit more "mature." So I started Drinking pinot grigio. I love me some pinot grigio. Nothing like a chilled glass of wine with dinner. So I got used to having that pretty much on a weekly basis as I tried to decompress from the stress of work and home and everything that was going on in my life. And that was pretty much the extent of my fitness... 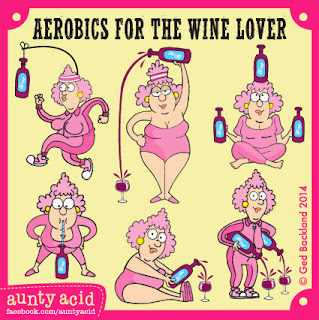 But let's throw it back a little to my 20's and hell, even last December. I'm a bad drinker. I'm one of those "hell, yeah it's party time let's have some drinks." And well, for me, some drinks turns into me getting pretty drunk and wanting to dance for 4 hours straight and well, acting like a moron. I've always drank to be more social to be honest. I'm not a very social, outgoing person. Just my nature. I've always been quiet and kind of shy and since I was little and even to this day people still probably think I'm a bitch. And while that's true on the home front most of the time, I'm totally not. If you actually take the time to know me and I actually let you in (oh, and if you're not a fake person I don't want to waste my time on) you have a loyal friend for life.

I've also drank to not think about what's going on in my life at the present time or what's happened to me in the past. I think for about 10 years from 21-31 I drank mainly to forget. And I'm not proud of those times as they were some tough ones for everyone in my life. I still graduated college, was successful in my career but holy hell the rest of my life was a mess, primarily on the weekends. It wasn't until recently when I began to take my health seriously after my back surgery. Well I guess not too seriously because I was still so bitter about the fact that I even had to have back surgery that I kind of indulged until December, but let's say 2014. I finally realized I had to stop using the past as justification for my actions and take back control of my life...to not let the past continue to haunt my thoughts and move forward. I tried in years of therapy and that didn't work. I think sometimes you just have to be ready to do it. No one can make you do it, you have to be ready to do it for you.

Now, side note here, Steve gave up drinking awhile ago. Like over 3 years ago. Sure, he'll have a beer every now and again, although the last time I think he drank was last May during an uncomfortable situation ha. But other than that, nothing. It's nothing like the start of our relationship where we drank bottles of wine together every weekend or went to beef and beers. Not sure what that is? You're probably not from PA! (This Jersey girl had no clue either!) 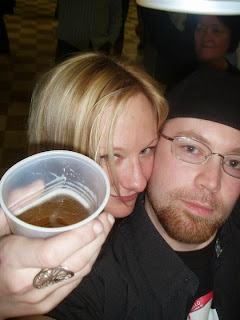 So he's had to put up with my drunk self on occasion, ok, occasionS and deal with me being a fool, driving my drunk ass home and help me to piece together the night before. Really, there must have been some nights he's looked at me and thought, what the hell did I do? I would've.

But, luckily I've kind of stopped drinking recently, I mean like really drinking. I have had no desire to drink as I have in the past. There's too much on the line now, not to mention the last thing I want is a 5 day hangover, 5 days of missing workouts! But I'm going to try the whole moderation thing and I think it's been working out for me. Last Saturday, we had friends from CT visit and I had some Sangria. Funny thing is, I felt so crappy the next day. 2 glasses and I felt horrible. I was convinced there was gluten in it. When in doubt, blame gluten. But I think it's because I ate so clean for a week straight I shocked my body and didn't know how to process that Sangria. BUT, I was still able to kick some ass with Les Mills on Sunday so it was nothing like how it used to be, eating a bagel sandwich from Dunks. My parents and Steve used to have to do the trifecta the day after I drank: Dunks egg & cheese sandwich, eggplant sub and ice cream/chocolate. How gross.

So, I may have to try some more low-carb, less sugar drinks. Need to find what works for me. And have 1 or 2. MODERATION. I have no desire now to ever get how I used to get now that I've embarked on this healthy journey and don't want anything to jeopardize that. Plus, who really needs all of those calories? I think of my Saturday weigh-ins, having a 5 day hangover, feeling GOOD every day as I have been and I think, is it worth it? No thanks, I'd rather workout then curl up on the couch and catch up on my shows and wake up FRESH! 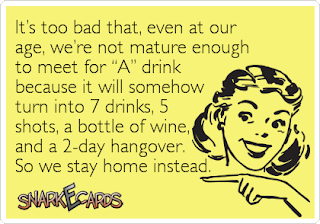 I'm only talking about drinking because the 4th is upon us and I know for many that means burgers and brews. And hey, I'm all for that. If you can do that in moderation, more power to you. But for me, it's kind of an all or nothing situation. Will I have a glass of something this weekend? Probably, at a bbq on Saturday. But it will be nothing like the last 4th of July when I had probably a bottle of wine all myself and then followed that up with some beer. No thank you.

So I guess the moral of the story is... if there's something about yourself you're not proud of or you want to change, you can do it. I'm 36 years old and I'm still figuring out my limits, my boundaries, who I want to be as a person and that journey will never end. As long as you keep doing things to move yourself forward, or #travelforward as we like to say at work, then that's all you can do. And good things will come out of that... They are for me and I know they will for you too....

Best Coffee Shops in Leavenworth, WA.…
Buying Tickets For the Eiffel Tower i…
Travels through History – Northern Sp…
Angels Landing at Zions
What is an API? A Comprehensive Begin…


This post first appeared on Courtney Love: From Fro-Yo To Fabulous, please read the originial post: here
People also like
Best Coffee Shops in Leavenworth, WA.
Buying Tickets For the Eiffel Tower in Las Vegas
Travels through History – Northern Spain – Pontevedra
Angels Landing at Zions
What is an API? A Comprehensive Beginner’s Guide And Mini Tutorial
Top tips for safe diving, a water-powered battery and understanding Gaelic with ultrasound

I used to be a drunken mess.