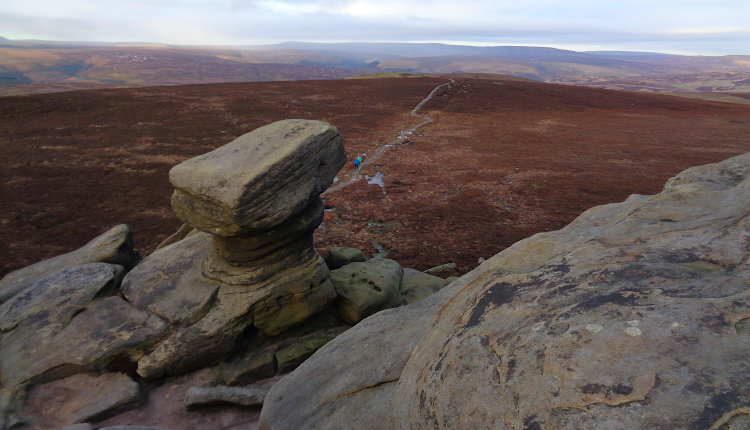 I had been extremely lazy over the Christmas period and was itching to get out for a good long walk. I put the route together quickly on the OS Maps website, not worrying too much about quality. It was the mileage that mattered more to me on this occasion.

I parked on the A57 by the Ladybower bridge and headed up to Derwent Edge via Whinstone Lee Tor. It was a fresh morning and the wetter areas of the ground were still frozen over. I passed the distinctive landmarks of the Wheel Stones, White Tor, and Dovestone Tor as I continued along Derwent Edge, eventually arriving at Back Tor and the first trig point of the day. 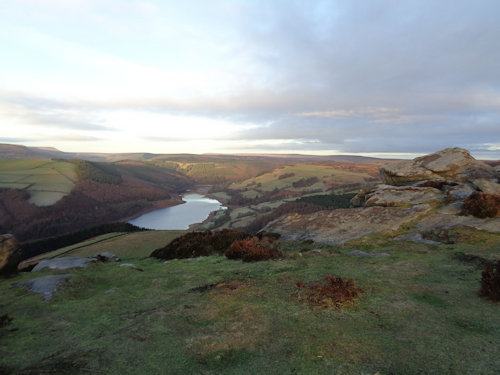 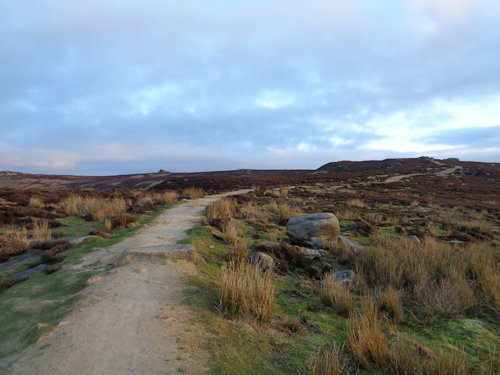 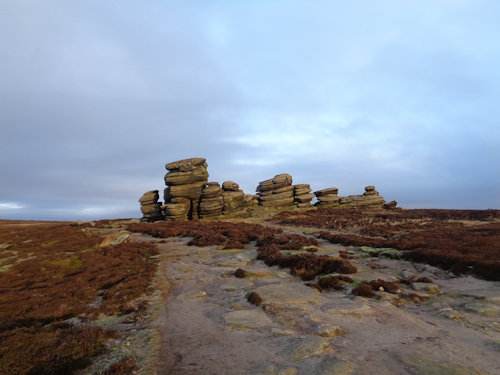 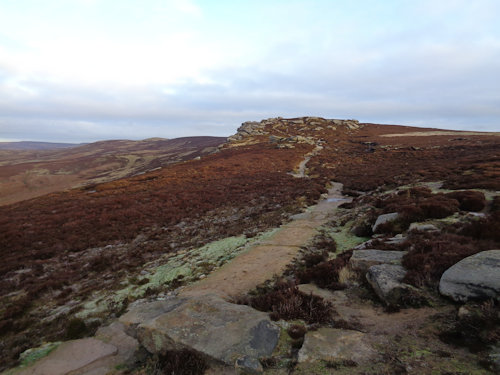 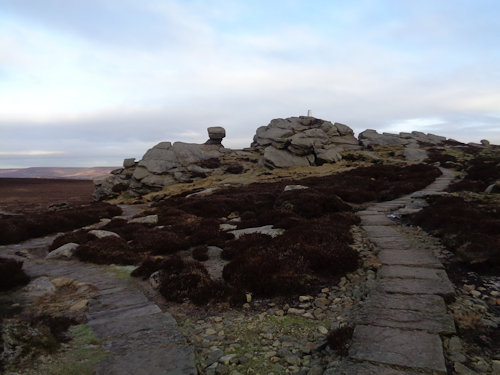 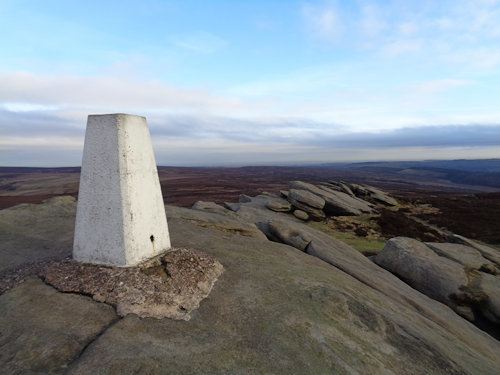 I continued north along Cartledge Ridge for a while before veering off to the west and joining Cartledge Brook. I’d been up the length of this before as part of the Derwent Watershed, and also the Upper Derwent Skyline walk. This time I had different plans. I left the main trunk of the brook via one of the branches to my left. On the Ordnance Survey 1:25k map, it’s the branch lined with grouse butts. There is a track of sorts upon the left-hand side of the branch which eventually becomes indistinct. Shortly after, I arrived at Wet Stones that overlooks Gravy Clough and Abbey Brook to the south, and across to Lost Lad and Back Tor on the other side. 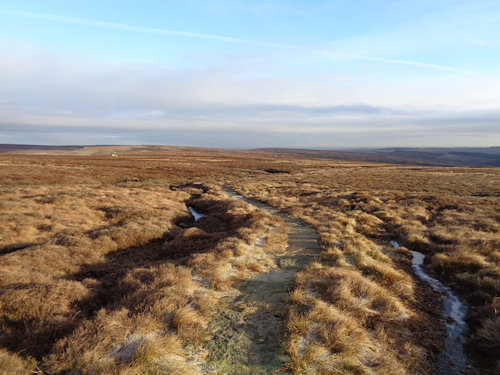 The path from Cartledge Ridge 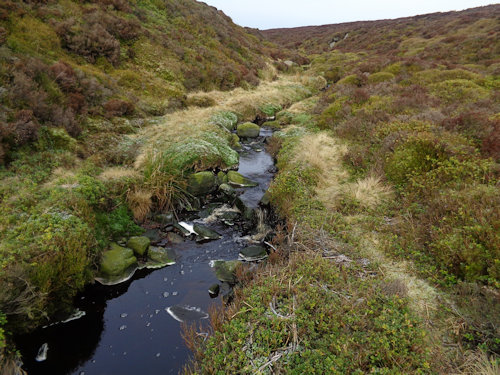 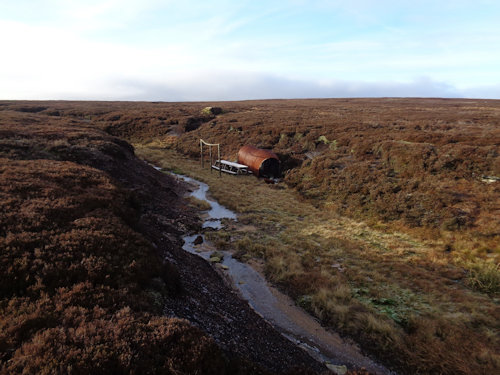 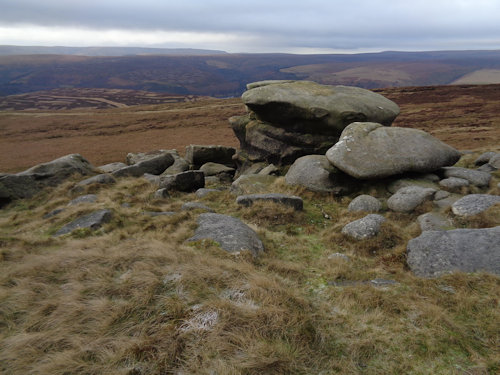 A brief walk west had me onto the distinct Howden Edge track which I proceeded to follow north past High Stones and along Wilfrey Edge. I don’t like to miss a trig pillar so I took the minor detour up to the Margery Hill summit where I decided to take a break and get some food down (chorizo and cheese are current favourites). Unfortunately, this meant taking my gloves off – something I try and avoid when the temperature is so low. It’s only a matter of minutes before they actually hurt with the cold and I struggle to bend my fingers. It’s probably Raynaud’s disease. Once I’d finished eating, I then continued across bleak moorland to the Outer Edge trig point. I was lucky in that the ground had frozen over as I suspect it would have been incredibly wet and boggy otherwise. As it was, I made good progress. 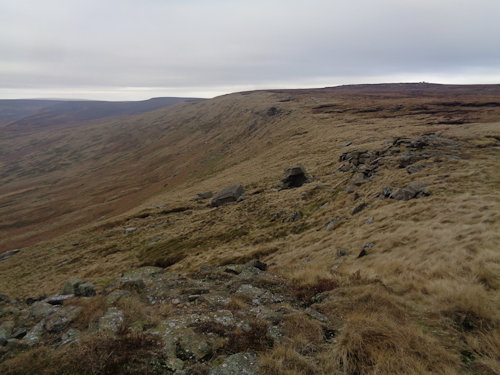 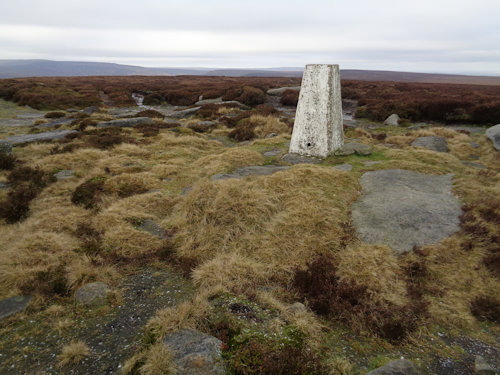 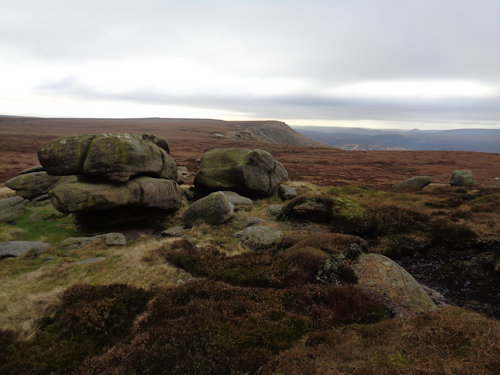 Looking back from Margery Hill 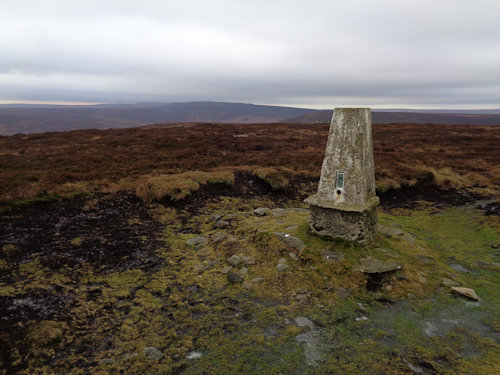 From Outer Edge, I dropped down the slope to the distinctive gritstone formations below. The map lists both the Crow Stones, and Rocking Stones in this area, and I wasn’t sure which was which. The formations were much larger than I was expecting and I was amazed I’d never been here before now. From the rocks, I headed back south-east along Crow Stones edge as far as the head of Broadhead Clough. It was here that I encountered an aircraft crash site. I didn’t realise this was here and hadn’t planned for it so, at the time, I had no information about it. Upon doing a bit of quick research after returning home, I discovered it was the crash site of an aircraft (Airspeed Consul TF-RPM) that was apparently on a delivery flight from Croydon to Iceland when it crashed into the hill. This happened on the morning of the 12th April 1951 killing all three crew members on board at the time. Like many of the crashes reported in the Dark Peak, the pilot is said to have lost sight of the ground in bad visibility and ran into the hill under full power. In one area, a small wooden cross acting as a memorial was stuck in the ground. I’ve read that there’s supposed to be a bunch of them but I only recall seeing the one. 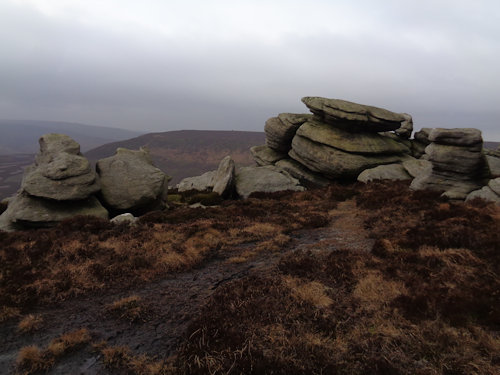 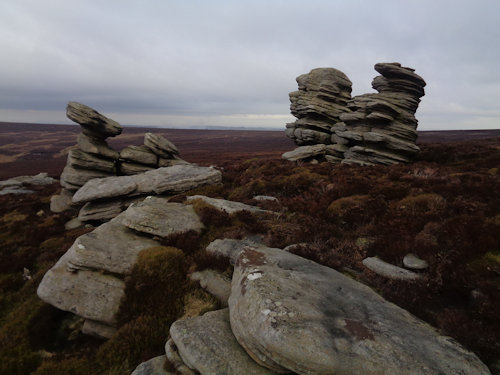 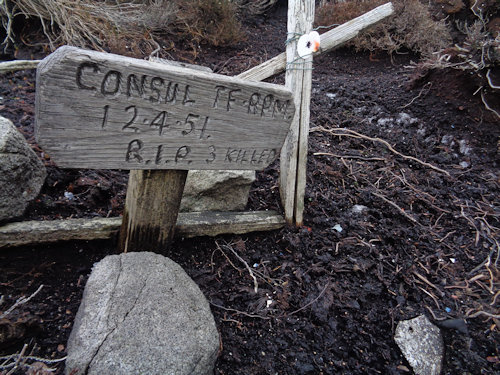 Cross at the aircrash site 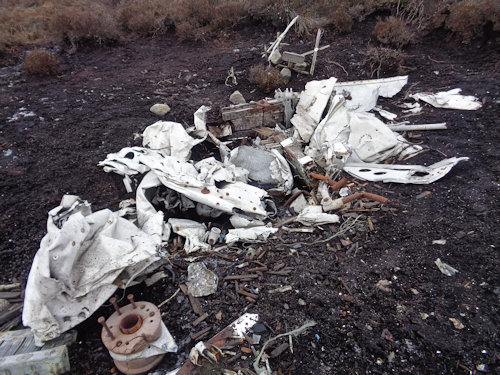 From here, I headed directly downhill, keeping Broadhead Clough on my right, until eventually, I emerged onto the path that runs alongside the River Derwent. The valley is extremely scenic but my cheap camera couldn’t really do it justice due to the overcast skies and poor lighting. I followed the path a while until I arrived at the area labelled Lands Side on the OS Map. I was aiming to cross the river around this point, and the map did actually show a track crossing it. I looked hard but unfortunately couldn’t see any sign of a track, nor did the river look crossable at that point. I backtracked a little, looking for a section of the river that looked a bit narrower – luckily that didn’t take too long although it needed a bit of a run-up for the jump across! 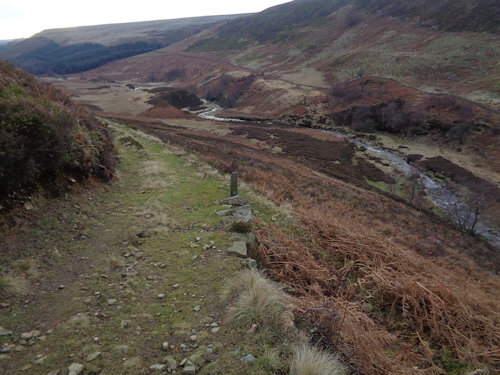 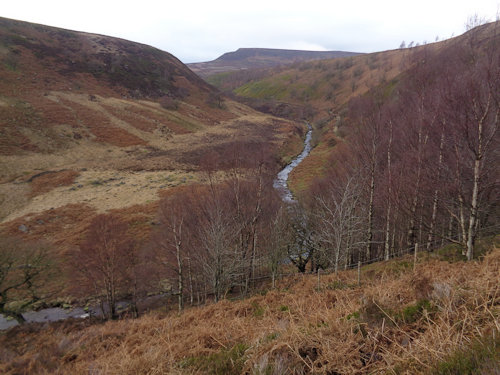 …and looking north up River Derwent

I scrambled up the hillside opposite to a track that made its way up above Lower Small Clough on Ronksley Moor. Here the path became a little more distinct and I followed it along the top of the clough until I eventually arrived at a small shooting cabin. From the cabin, a track had been created along the bottom of a large (man-made?) channel in the peat and led to Ridgewalk Moor where I suddenly recognised my surroundings and regained my bearings. I was now on the track that stretches between River Westend and the Barrow Stones – a track I’d utilised the year before on another walk. Feeling a little more confident and aware of the daylight hours rapidly running out, I upped the pace and made it my mission to get back to Howden Reservoir before darkness fell. As this track is used by vehicles, it made for much easier walking and so I accomplished my little mission without too much difficulty. 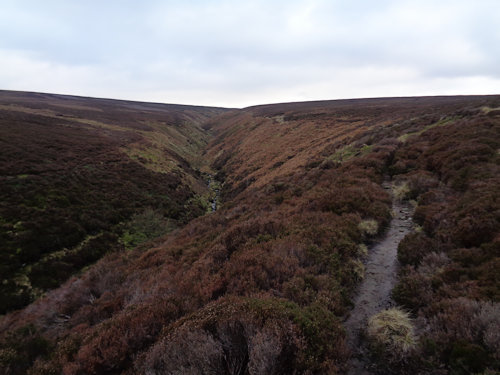 The track to the shooting cabin 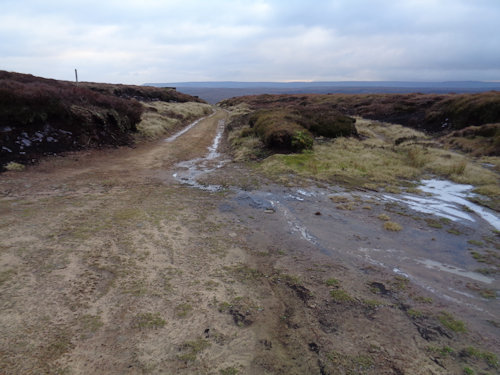 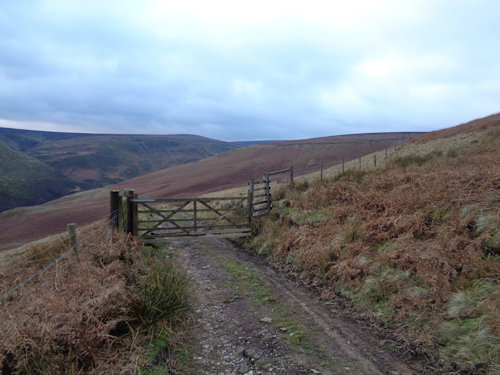 Heading down to River Westend

I had a choice from here… walk back along the reservoir path, or head on up to Alport Castles in the dark and walk back along Rowlee Pasture. The reservoir option was no doubt easier but also far less adventurous. I decided to finish the walk on a high and made my way up to Alport Castles. I quite like being up on the moors in darkness… the atmosphere is eerie and it’s deathly silent. So much so that you can almost hear yourself think. It’s rare in modern life that you experience that level of silence and I find it’s a great way to unwind and clear the head. I followed the well-trodden route along Rowlee Pasture using my little torch (which I very almost forgot to pack) before descending through the forest at Hagg Side and walking back to the car. 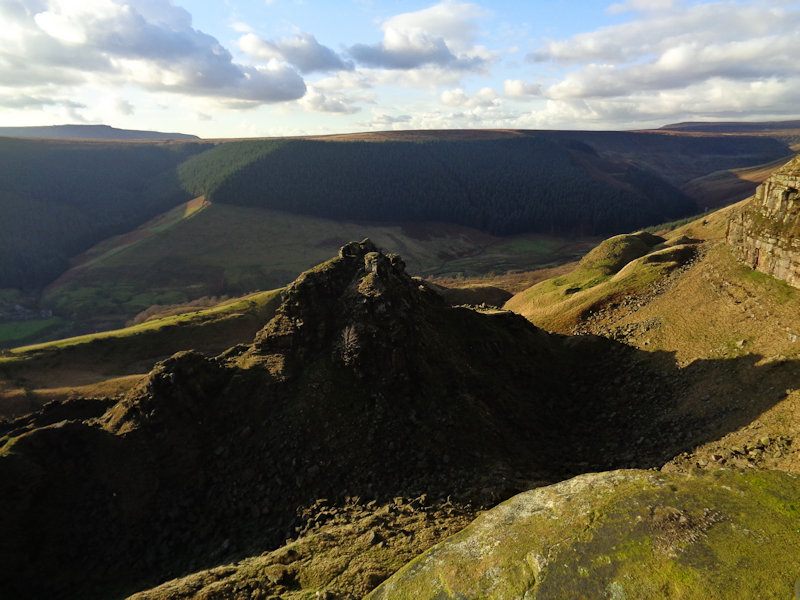