A walk in the Dark Peak exploring the south-west section of Bleaklow. The route starts on the Doctor’s Gate footpath and heads up to Bleaklow Head via a few of the interesting cloughs in the area, namely Ashton Clough, Wigan Clough, and Yellowslacks Brook. From Bleaklow Head, the route returns back to the A57 via Hern Stones, Higher Shelf Stones, and Crooked Clough.

Capture Attention and Drive Traffic w…
Cup and handle failed, what now?
Sex on Your Period – Reasons to Do It
8 Points to Consider When Trading Bi…
Best Low Acid Coffees That Won’t Upse…

This walk was originally planned to be quite a bit longer. Unfortunately, the weather forecast stated that it was going to be the hottest day of the year so far, and I am not good in those conditions. I suffer in the heat, and when my skin is exposed to direct sunlight, it burns like a vampires. Not really, but it feels that way. My original planned walk was around 20 miles long and incorporated several ascents and descents via the cloughs on both the north and south slopes of Bleaklow. I decided that there was no way on earth I would be able to complete that with a blazing sun blasting me with its heat rays all day. I would have withered before I’d walked half of that distance. I decided to try and cut the walk down to a more reasonable length, whilst still maintaining plenty of interest. I focused on the south-west chunk of Bleaklow and devised a walk of only 8 miles in length that managed to fit in Ashton Clough, James’s Thorn, Ferny Hole, Wigan Clough, Dowstone Clough, Bleaklow Head, and Higher Shelf Stones before descending along the top of the Crooked Clough slopes.

I started the walk from the lay-by at Snake Pass summit, near the Doctor’s Gate Culvert and by the Pennine Way footpath. I followed the Pennine Way as far as a junction of footpaths, labelled on the map as ‘Old Woman’. I’m not sure where this name comes from but I am intrigued should anyone want to enlighten me. This junction is where the Doctor’s Gate path (an old Roman road), and the Pennine Way footpath cross. As my first destination was Ashton Clough, I turned onto Doctor’s Gate and headed west towards Glossop, enjoying some gorgeous views along the way. As it was still early in the morning, and a weekday at that, I didn’t see another person on the path. I had it all to myself. The path runs along the valley, parallel to Shelf Brook down below, and it wasn’t long before I could see Ashton Clough on the opposite side, rising up the south slope of Bleaklow to Shelf Moor above.

Shelf Brook leads from Shelf Moor on Bleaklow down Doctor’s Gate through Old Glossop to Glossop Brook. This brook passes westward through Milltown, Howard Town and Dinting to the River Etherow, which in turn runs south to join the River Goyt at Marple Bridge. 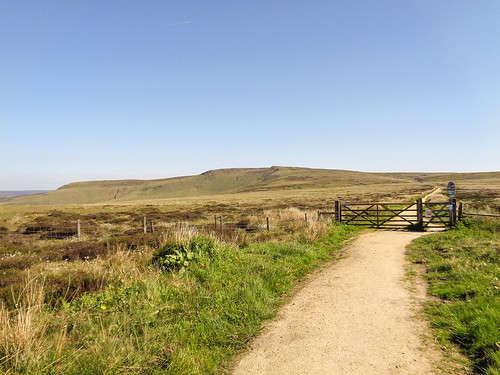 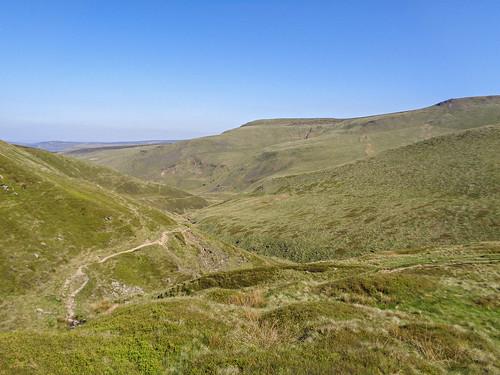 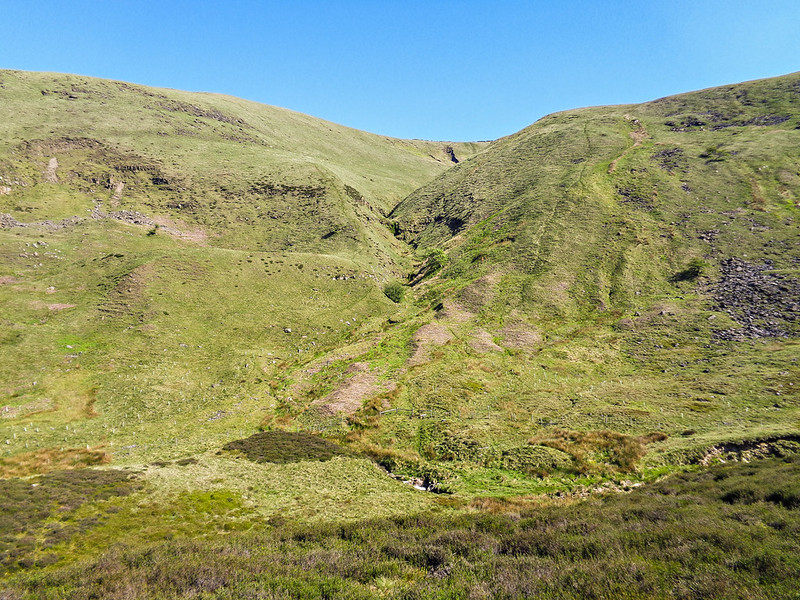 I made my way down the slope, crossed Shelf Brook, and made my way into Ashton Clough. The lower section of Ashton Clough contained a few waterfalls that I found far too slimey and treacherous to even think about climbing up, and so I bypassed these around the sides. The scrambling on the whole was very easy, however the route remained interesting and offered a feeling of isolation that you wouldn’t get walking up the much more popular Pennine Way route. Pieces of aircraft debris belonging to the C-47 Dakota can be found just about all the way up to Shelf Moor. Where the clough forks near the top, I chose the left fork up onto Shelf Moor and not too far away from the memorial on James’s Thorn where I was heading next. 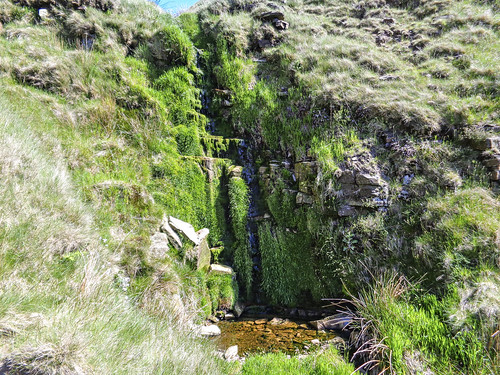 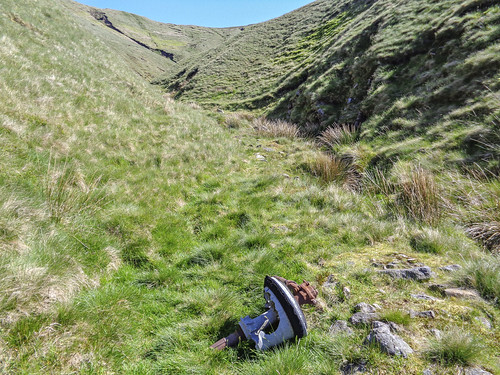 The aircraft debris belongs to the Douglas C-47 Dakota 42-108982 which crashed on Shelf Moor on the July 24th 1945. The aircraft was being flown on a transport flight from the airfield at Poix, France to the Renfrew airfield in Scotland. It had stopped at Leicester East and took off from there during the morning of the 24th July and failed to arrive at its destination. On the 26th July the wreckage was discovered by a member of the RAF whilst walking with his girlfriend on Bleaklow. The crash site was attended by the Mountain Rescue Team at Harpur Hill.
(Source: Peak District Air Crashes) 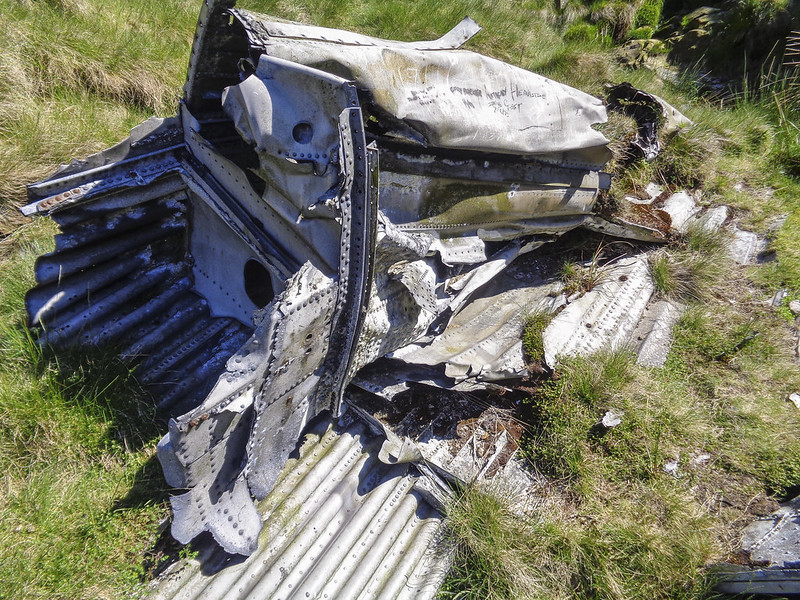 Wreckage from the C-47 Dakota. This piece is apparently the leading edge of the port wing

I headed up the hill to the memorial on James’s Thorn. James’s Thorn is another crash site – this time to the Lancaster Bomber KB993. The memorial contains two plaques. The upper one reads:

“On the night of May 18th 1945 Avro Lancaster KB993 of Canadian 408 Squadron crashed at this place. The crew were flying circuits and bumps.

In Memory
They are not forgotten” 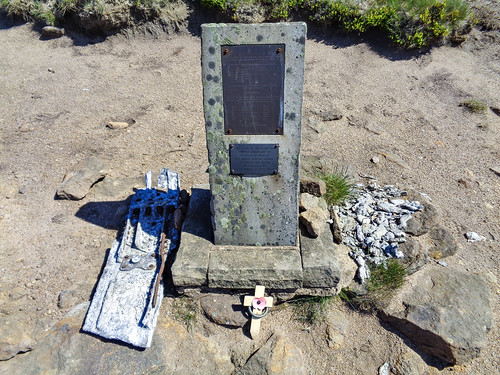 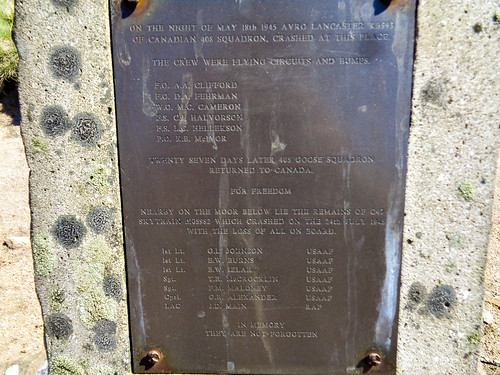 Close-up of the memorial 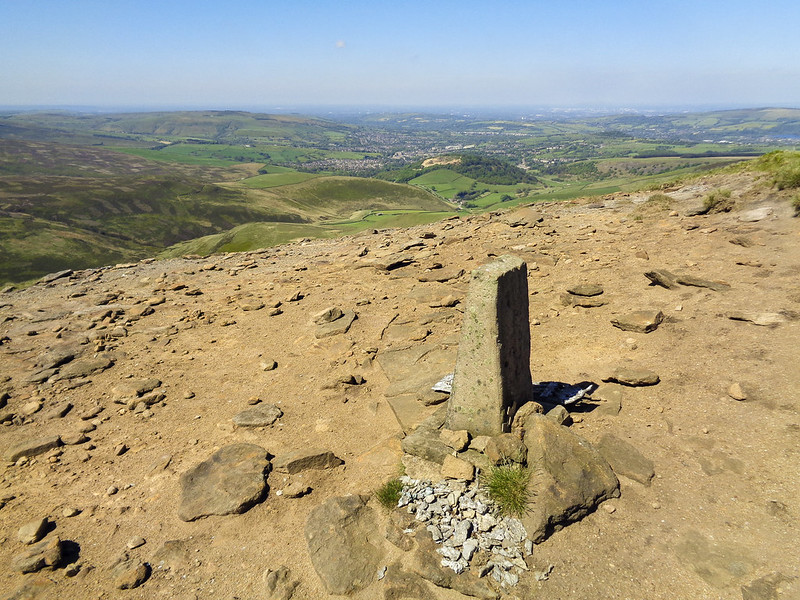 View towards Glossop from the James’s Thorn memorial site

Once on the top of James’s Thorn, I continued roughly westwards down the other side, making my way to the flat area of land that lies between the bank of Yellowslacks Brook and the western slopes of Shelf Moor. It was on here that I discovered a small cave, accessible by first dropping down into a hole. Luckily I had my head-torch in my bag so I entered the cave for a look. I ended up staying down here for a good five minutes or so as I enjoyed the cool temperatures compared to outside. Note that there is a geocache located in this cave that should be left alone if geocaching isn’t your thing. 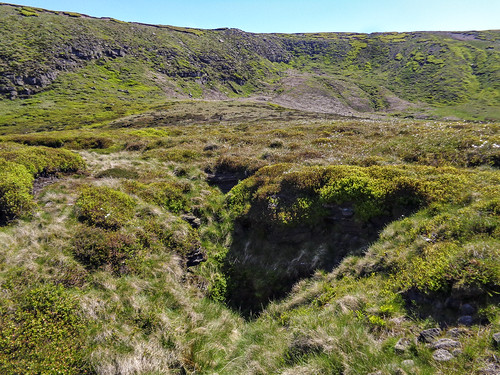 Entrance to the cave at Ferny Hole 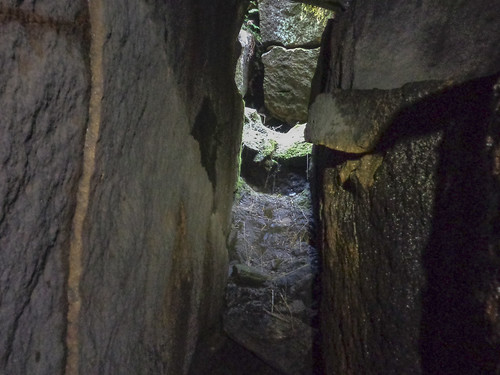 After leaving the cave, I made my way down towards Yellowslacks Brook via Wigan Brook – an attractive and lesser used route of ascent/descent. Once down in Yellowslacks Brook, I headed upstream towards Bleaklow. There weren’t any paths or tracks in this lower section, however I didn’t have much of a problem progressing. Eventually the route steepened and a choice of two ways forward presented themselves. On the left, a wonderful looking waterfall. On the right, a dry, steep, and very crumbly looking gully. The crumbly gully didn’t look at all appealing, but then again the waterfall, upon closer inspection, didn’t look safe to climb either. There was little in the way of handholds and green slime appeared plentiful. The best way forward was to partially ascend the crumbly gully then climb up its left hand wall up and over into Yellowslacks Brook at a point beyond the waterfall. There were smaller waterfalls to deal with after this but these were much easier to progress past and made for a pleasant journey. 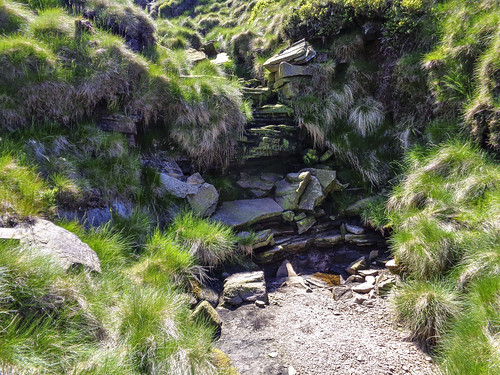 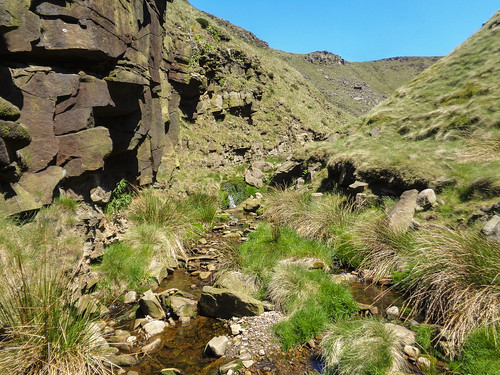 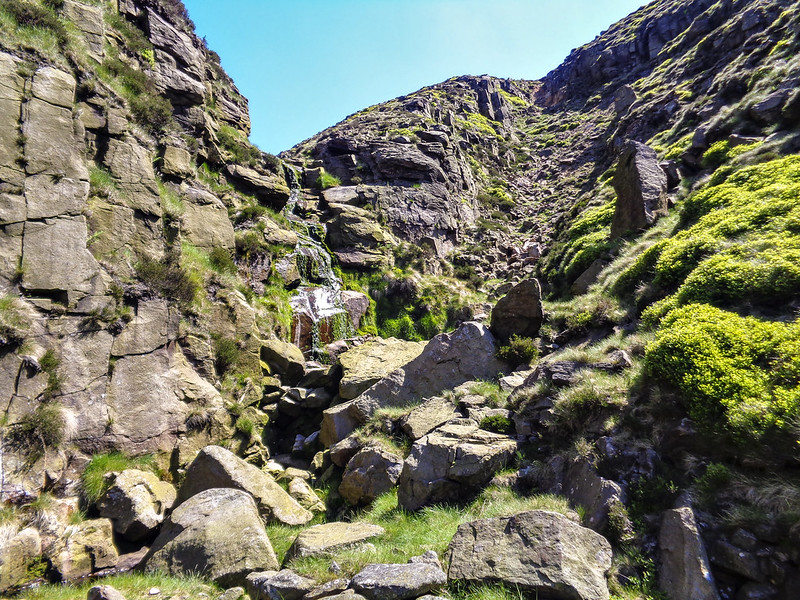 The upper section of Yellowslacks Brook. The slimy waterfall on the left or the crumbly gully on the right? 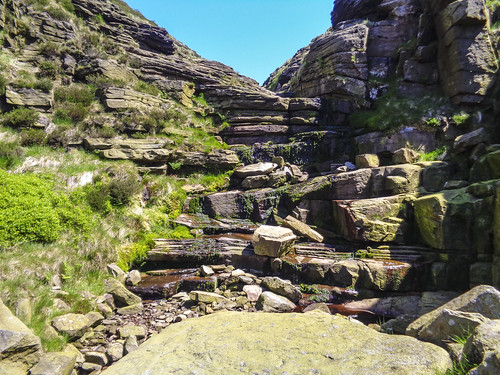 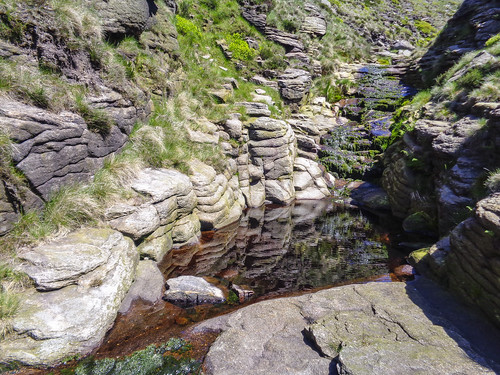 The brook levels out near the top

Once the terrain started levelling out, I made a small detour back along the top of Dowstone Clough as far as Dog Rock so that I could enjoy the views for a little while longer before heading onto the moors of Bleaklow. 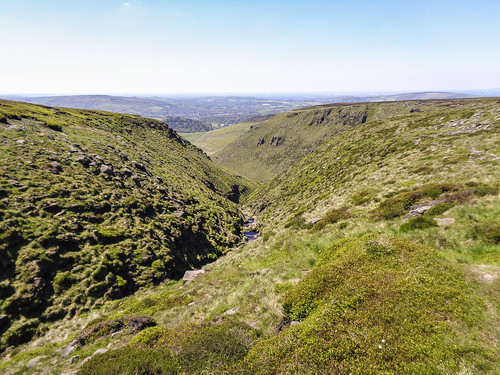 Looking back down Yellowslacks Brook 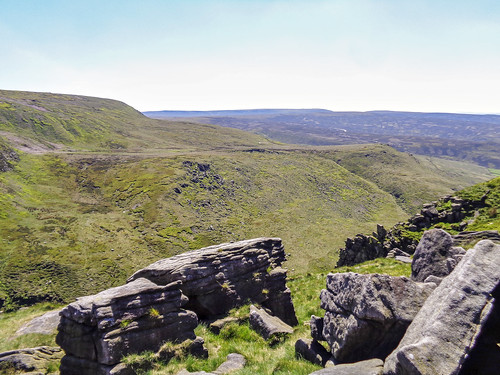 Looking across to Ferny Hole and Wigan Clough

After making my way back to the head of the clough, I turned off the track and attempted to make a beeline towards Bleaklow Head. If I’m honest, my route finding was a little poor here as I constantly found myself stranded between waterlogged mossy areas. Eventually, I arrived at Bleaklow Head via the Wain Stones (two distinctive rocks that, from a certain angle, look like two heads kissing). 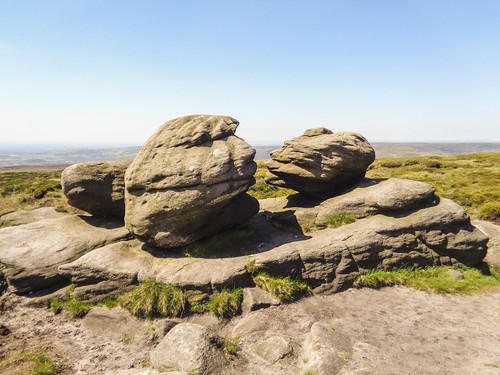 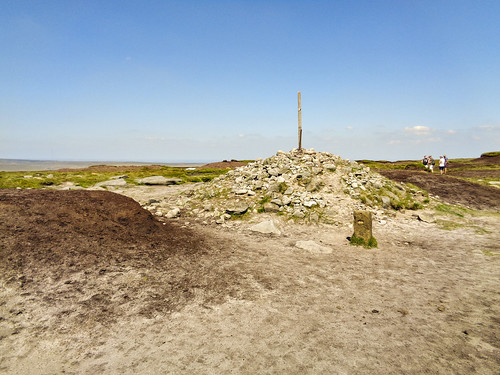 My journey was nearing it’s end as I made my way south towards Hern Stones and Higher Shelf Stones. Once again, my route finding was a little off as I navigated from boggy grough to boggy grough, until I eventually arrived at Higher Shelf Stones. I spent some time admiring the old graffiti, some of which was as old as the nineteenth century, and somehow completely forgot that there was a well known airplane crash site here! I blame too much sun. 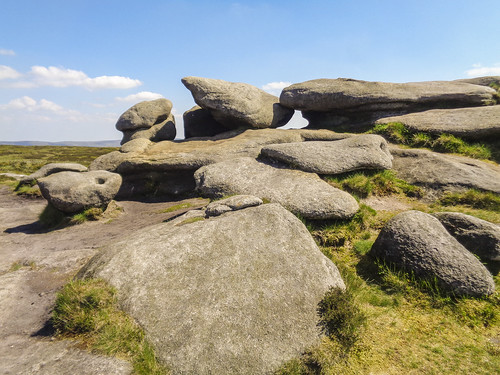 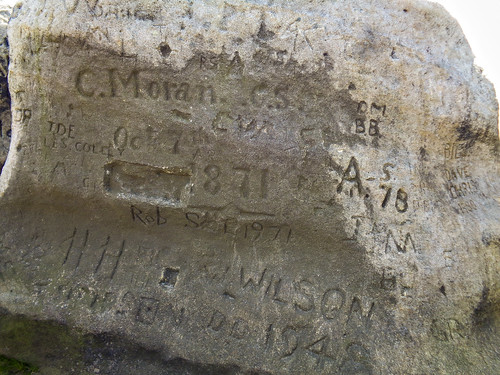 An example of old gritstone graffiti 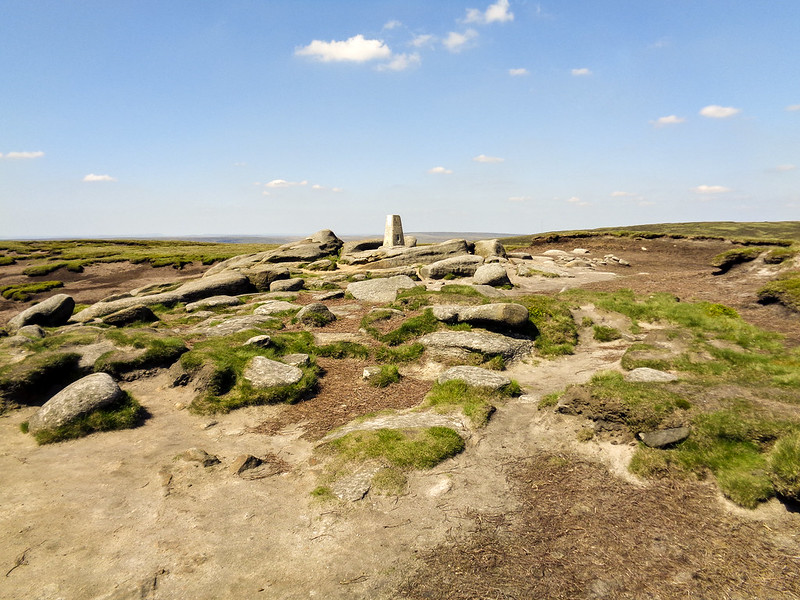 I made my way down the slopes from Higher Shelf Stones as far as Crooked Clough, which I crossed before following the track on the other side back towards Doctor’s Gate. At this point, I realised that I had somehow dropped my camera! I panicked and tried to think where I last took a picture. It was Higher Shelf Stones up above. Keeping my fingers crossed, I followed the track back towards top. About half way up I found it. Phew! 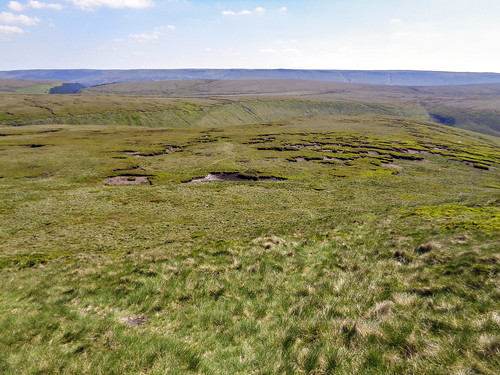 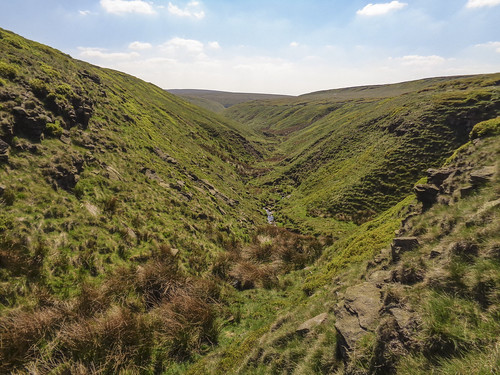 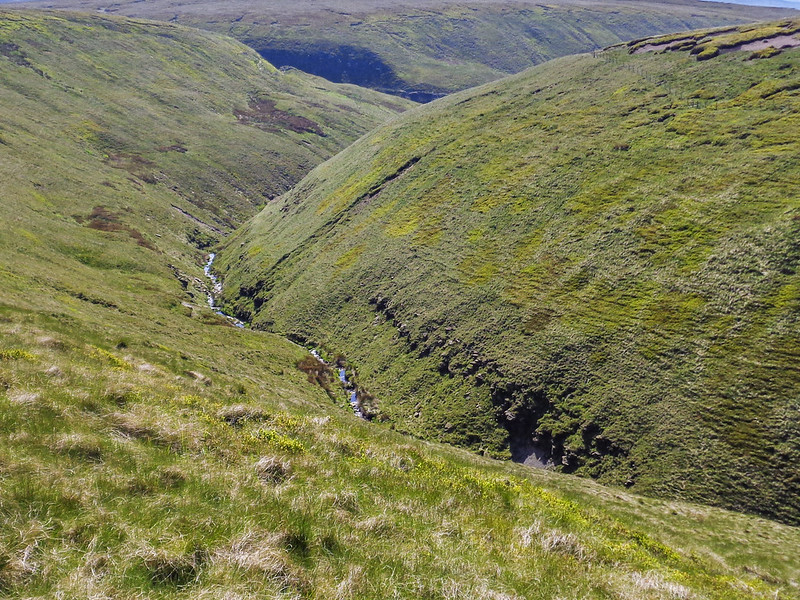 Heading back along the top of Crooked Clough

Eventually I arrived back at the Doctor’s Gate path, which pretty much marks the end of the walk. It was a shorter walk than usual but covered quite a bit of ground that I had not explored before. I got into the car, feeling satisfied before suddenly remembering that there was an airplane crash site I’d missed! After a few curses, I realised that it wasn’t such a bad thing that I missed it as I now have an excuse to return again in the near future.

GPX file for the walk
This route on Viewranger
Photo album on Flickr
Peak District Air Accident Research website
My guest post on mudandnettles.com relating to this walk