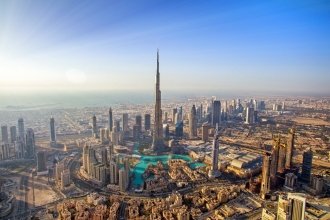 One of the most important series of gatherings, the World Blockchain Summit, arrives to Dubai to showcase the latest insights about how blockchain is being implemented across different sectors within the global economy. It connects top global blockchain gurus and Technology players in this space including emerging startups with regional businesses, government authorities, IT leaders, tech entrepreneurs, investors and blockchain developers. The event will be split throughout two days, starting on October 24 to 25.

This elite, each of one representative of this technology’s development and its consequent implementation, will discuss a whole range of varied topics orbiting, of course, around how blockchain can disrupt them. Identity, cryptocurrency and the current state of development will be at the centre of every featured subject while speakers will share their expertise to provide solutions brought by this distributed ledger technology.

These will come from speakers from national institutions, as well as developers and entrepreneurs, about the Blockchain in Electronic Identification Systems, registering new businesses using this technology, Bringing DAO’s back or improvements made towards building a completely decentralized proof of the existence.

Financial discussion will come into play in the shape of tips to Investing in pre-ICO , the perusal of a successful token sale, a thorough insight about the Blockchain-based Fintech offerings rise and key differences between Security & Utility tokens. The current state of blockchain’s development from a technology perspective can be seen through the expected showcase of “from Zero-knowledge protocols to Knowledge Proofs”, and working out a decentralized A.I.

But this event wouldn’t be as important as it is within the blockchain landscape if it weren’t for its powerhouse list of speakers from all around the world – and featuring every sector. These will be sitting on two different panels: on one end, the government’s side while, on the other, business and investor representatives. 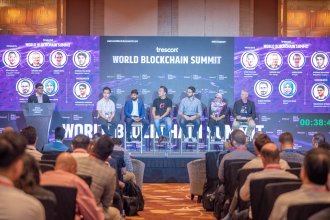 Speakers will be sitting on two different panels: on one end, the government’s side while, on the other, business and investor representatives

The event has been disclosed in four major showcases: the conferences, where “international and regional blockchain experts talk about the pros and cons of adopting these technologies specifically in the Middle Eastern markets; featuring a panel discussions, tech-talks, fire-side chats; debating on blockchain’s potential to reshape the global financial system.” A Product Showcase area where “new developments, ideas and products out of the blockchain will be introduced by global technology innovators and emerging startups from all over the world.” A Workshop, aiming “to introduce, educate and encourage adoption of blockchain technologies led by industry experts who passionately believe in the transformational potential of blockchain and Distributed Ledger Technologies. Workshops will be open to professionals, developers, students and blockchain enthusiasts.” And at last but not least a Pitch Competition, where “emerging blockchain startups from all over the world will introduce their solutions by delivering a 6-minute elevator pitch and compete to win the best Blockchain technology idea – along with $1 Million prize. Best ideas are selected by our investor’s panel who specializes in helping entrepreneurs to expand their businesses in North America, Asia, the Middle East, and Europe.”

The World Blockchain Summit is a series of elite gatherings that take place in 15+ destinations across the world, this time is the turn of the United Arab Emirates’ capital Dubai and will feature more than 200 delegates from all around the world. Throughout two complete sessions, from October 24 to 25, assistants will have the opportunity to learn from top players involved in the blockchain ecosystem, and as such, shed some light to this breakthrough technology at the luxury Jumeirah Emirates Towers.