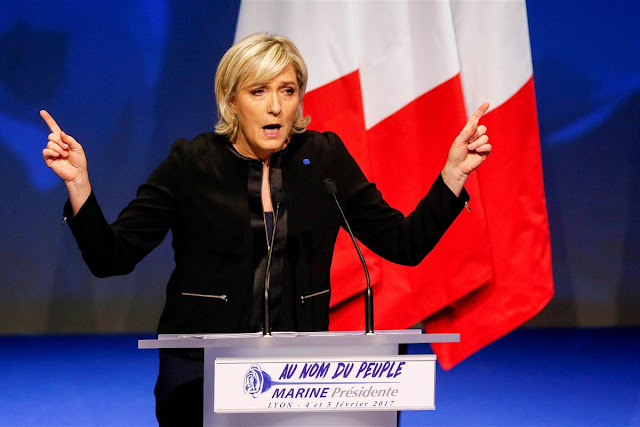 France’s Front National (FN) was founded by Jean Marie Le Pen in the 1970s. It grew out of the country’s political wilderness to become its second most popular party. Jean Marie’s daughter Marine climbed the party ranks in his shadow.


Marine Le Pen’s political career was given a boost in 2011 when she was elected by party members to be FN.


Her anti-establishment, anti-immigrant message struck a chord and, in 2012 she finished third in the national poll.


To distance herself from her father’s often xenophobic and anti-semitic comments, Marine Le Pen took more of a leading role in the National Front. She transformed the party’s image for the better and broadened her appeal.


With her goal of limiting the power of the European parliament, she forged alliances with Eurosceptics across the EU.


Marine Le Pen said she wanted to block any transfer of sovereignty, refuse any new EU restrictions and prevent further enlargement of the bloc.


Surrounding herself with a young communications team and, with the help of social networks, she captured the attention of the nation.


Tactics included a closely coordinated and orchestrated campaign. During a television interview, she outlined a policy where dual citizens from non-European countries would be forced to choose which nationality they want to keep.


Her campaign was plagued by scandals. Le Pen was alleged to have faked her parliamentary expenses to pay her bodyguard.


French prosecutors asked the European parliament to lift her immunity from prosecution.


In April 2014, she qualified for the second round with about 21 percent of the votes cast, finishing in second place to Emmanuel Macron.


After the second round run-off she remains the runner-up to Macron.