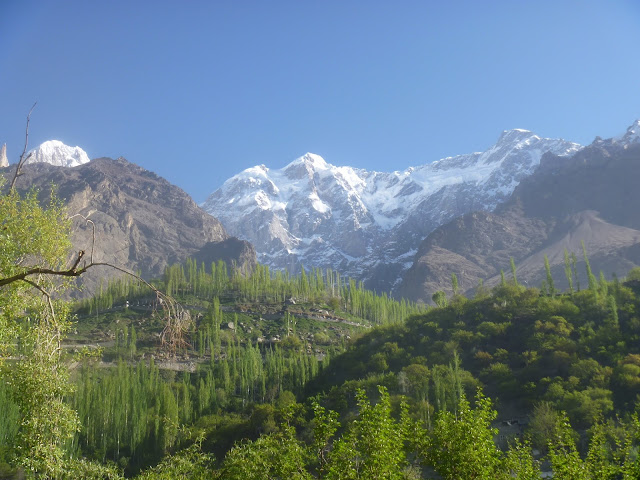 ISLAMABAD, April 7: Hunza has once again achieved Unesco's Asia-Pacific Heritage Award for Culture Heritage Conservation, a statement issued here on Monday said.
The award of distinction for the year 2002 has been given to Ganish, a small settlement in central Hunza in the Northern Areas, for preserving four historical mosques.
In all, 142 entries from 37 Asia-Pacific countries competed for the Award, bringing to world attention the high quality of conservation work being done around the region.
Richard Engelhardt, the Unesco regional adviser on culture for Asia-Pacific, presented the award to the community at a ceremony at Ganish, some 110 kilometres off Gilgit, on Saturday last.
The ceremony was attended by Unesco country director Ingeborg Breines, federal secretary for culture Ismail Niazi, representatives of AKCSP and the Karakoram Area Development Organization (KADO), besides all the community members as well as many people from the surrounding villages of Altit and Karimabad,
The award, established in 2000, is given in recognition of the efforts and contributions of individuals and organizations that have successfully restored and conserved structures and buildings of heritage value in the Asia-Pacific region.
The programme aims at promoting conservation of the region's architectural heritage, which is threatened by unchecked development, neglect, or inappropriate reuse.
The living historic village, popularly known as Ganish Khun, is about one thousand years old, with a small community working towards improving its quality of life. With the spread of Islam, the Yarikutz, the Rupikutz, the Kuyokutz and the Mamorokutz - the then leading families of the area - constructed four mosques and watch towers dating back to the 16th and 17th centuries. These unique structures, which were decaying owing to the ravages of time and lack of financial and technical resources, have been restored to some of their old glory with the assistance from Norway and Spain, through the Aga Khan Cultural Services Programme (AKCSP).
Encouraged by this support, the local community began to pave their streets, restore the old unstable houses, improve the sanitation system, and is now in the process of building a water filtration plant.
Ganish Khun is now seen as a model village, inspiring other settlements of the area to follow suit, thus substantiating Unesco's belief that recognizing successful preservation efforts helps spur additional projects within the same community, advocating the culture of preservation and conservation through the use of appropriate conservation techniques and approaches.
In awarding the prize to the Ganish project, the panel of judges cited: "The restoration of four 300-year old wooden mosques in Pakistan's Hunza Valley has successfully revitalized the village "chataq", the traditional public heart of the Ganish historic settlement. Initiated and undertaken by the villagers, with professional guidance, the project has rebuilt community spirit in a rural village which has undergone major socio-economic change and natural disasters over the years.
"The restrained conservation approach has stabilized the buildings which were in danger of collapse, while retaining the rich historic patina and showcasing the intricate detailing of the structures. Modern materials were selectively incorporated alongside the use of traditional materials and techniques. The preservation of the surrounding buildings and infrastructural improvements was sensitively executed, consequently strengthening the traditional town fabric while upgrading the quality of life of the residents. The project presents an outstanding example of a community-led initiative strategically facilitated by outside support".
This is the second time that Hunza has been honoured with the Unesco award. Earlier, the 700 years old historic Baltit Fort, which was preserved and renovated by the AKCSP, was the first project which bagged the Unesco Cultural Heritage Award in 1999.