Cell biology (Gr., kytos-hollow vessel or cell, logos-to discourse) is a biological science which deals with the study of cells. The cell itself can be regarded as the vital unit of organisms. 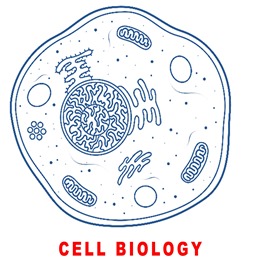 'Aristotle' and 'Paracelsus' concluded that "all animals and plants, how­ever, complicated are constituted by few elements which are repeated in each one of them."

The beginning of cell biology dates back to the 15th century, when 'Da Vinci in 1485 has stressed upon the use of lenses in viewing small objects. In 1658, 'Jan Swammerdam' gave the first description of the cell in his account of the red blood cells of the frog. The cytology came in its actual existence with the discovery of cell in 1665, by "Robert Hooke", while examining a thin slice of cork under his crude compound microscope, Hooke observed its honey-combed structure. He gave them the name "cells" (cellulae -little room).

Malphighi' studied a variety of animal tissues microscopically and there­fore, he is generally considered as the father of 'microscopic anatomy '.

The cell theory was proposed by two German biologists'M.J.Schleiden' (1804-1881), and Theodor Schwann' (1810-1882) independently in 1838 and 1839, respectively. The cell theory holds that the animals and plants have same pattern of organization and construction. The bodies of both animals and plants are composed of cells and that each cell can act independently. In words of 'Schwann' and 'Schleiden' cell is "functional biological unit'.'

"Rudolf Virchow" in 1885 stated, "where a cell exists there must have been a pre-existing cell, just as the animal arises only from an animal and the plants only from a plant".

"Purkinje" in 1840 coined the term protoplasm. The protoplasm was first of all observed by "Corti" (1772) and the French Zoologist 'Dujardin' (1835) called it sarcode.

"Huxley" in 1868 referred to protoplasm as the "physical basis of life".

The protoplasm theory states that all living matter of animals and plants is protoplasm. The part of the protoplasm which occurs between the plasma membrane and nucleus is named as cytoplasm.

20th century brought many modern micro techniques. New histo chemical and cyto chemical methods have been developed to detect various molecular components of the cell. Different biochemical events of the cell could be known by autoradiography. Methods of tissue culturing have made possible the study of living cells.