Shallow Foundations: Bearing Capacity and Settlement was originally published with
a 1999 copyright and was intended for use as a reference book by university faculty
members and graduate students in geotechnical engineering as well as by consulting
engineers. During the last ten years, the text has served that constituency well. More
recently there have been several requests to update the material and prepare a new edition.
This edition of the text has been developed in response to those requests.
The text is divided into eight chapters. Chapters 2, 3, and 4 present various theories
developed during the past 50 years for estimating the ultimate Bearing capacity
of shallow foundations under various types of loading and subsoil conditions. In
this edition new details relating to the variation of the bearing capacity factor Ng
published more recently have been added and compared in Chapter 2. This chapter
also has a broader overview and discussion on shape factors as well as scale effects
on the bearing capacity tests conducted on granular soils. Ultimate bearing capacity
relationships for shallow foundations subjected to eccentric and inclined loads have
been added in Chapter 3. Published results of recent laboratory tests relating to the
ultimate bearing capacity of square and circular foundations on granular soil of limited
thickness underlain by a rigid rough base have been included in Chapter 4.
Chapter 5 discusses the principles for estimating the settlement of foundations—
both elastic and consolidation. Westergaard’s solution for stress distribution caused
by a point load and uniformly loaded flexible circular and rectangular areas has
been added. Procedures to estimate the elastic settlement of foundations on granular
soil have been fully updated and presented in a rearranged form. These procedures
include those based on the correlation with standard penetration resistance, strain
influence factor, and the theory of elasticity. 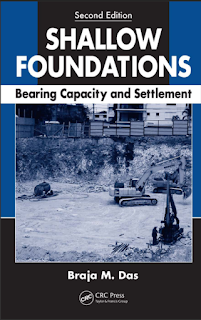 Chapter 6 discusses dynamic bearing capacity and associated settlement. Also
included in this chapter are some details regarding permanent foundation settlement
due to cyclic and transient loadings derived from experimental observations obtained
from laboratory and field tests.
During the past 25 years, steady progress has been made to evaluate the possibility
of using reinforcement in granular soil to increase the ultimate and allowable
bearing capacities of shallow foundations and also to reduce their settlement under
various types of loading conditions. The reinforcement materials include galvanized
steel strips and geogrids. Chapter 7 presents the state of the art on this subject.
Shallow foundations (such as transmission tower foundations) are on some occasions
subjected to uplifting forces. The theories relating to the estimations of the ultimate
uplift capacity of shallow foundations in granular and clay soils are presented
Start Download
LINK