he outgoing Japanese Prime Minister Shinzo Abe along with his cabinet has resigned today. This  makes the way for his successor and Japanese ruling party's new president Yoshihide Suga as Japan's next Prime Minister.
The 71-year-old Suga, known as Abe’s trusted aide, a longtime aide and Chief Cabinet Secretary under Abe, is a self made politician. He is son of a strawberry farmer in the northern prefecture of Akita. Suga has won a landslide victory yesterday, to take over the Liberal Democratic Party (LDP). He pledged to carry on many of Abe's programs, including his signature "Abenomics" economic strategy. 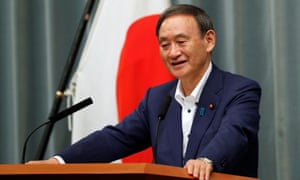 Suga has so far served in several key political roles, including most recently as chief cabinet secretary. He has also effectively been the face of Abe’s government, serving as its top spokesman and defending decisions in daily press conferences.  With this, Suga becomes the 1st new prime minister of the Reiwa era.
Former foreign minister Fumio Kishida and former defense minister Shigeru Ishiba were the other two candidates running for the Prime Minister post.

Abe, Japan's longest-serving prime minister (7 years and 266 days), announced last month that he was stepping down due to health issues.
sponsored links