Which international fitness brand has recently signed Bollywood actress Katrina Kaif as its new brand ambassador in India ?
The government has raised the foreign aid to which country from ₹750 crore last year to ₹1,050 crore in the 2019-20 Budget, an increase of 40% ?
Finance Minister Nirmala Sitharaman recently presented the Union Budget 2019 in parliament. She broke the tradition by carrying the budget in a _________ instead of the usual leather briefcase.
Finance Ministers in the past have carried the budget in a leather briefcase.  The tradition was established by first Finance Minister of India. Name him ? 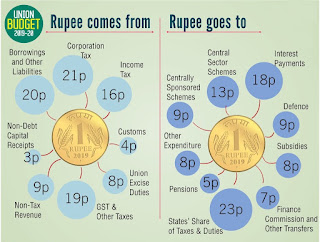 Which country has recently approved a small, pioneering tax on internet giants like Google, Amazon and Facebook ?
Finance and Corporate Affairs Minister Nirmala Sitharaman recently tabled the Economic Survey of India 2019. This survey projects GDP to grow at __________ per cent in 2019-20.
According to the Economic Survey 2019-20, the Indian economy is expected to grow at ________ per cent.