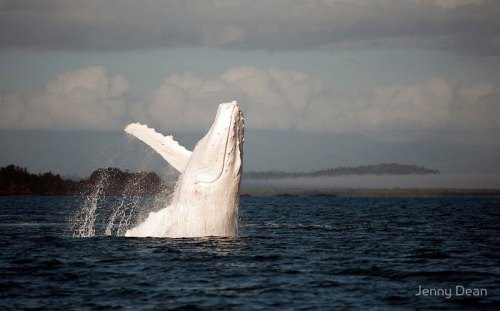 On November 14, 1851, Herman Melville’s Moby Dick, or The Whale was first published.  The story of a mad whaling captain pursuing a monstrous white whale across the oceans of the world, Moby Dick was underwhelmingly received and sold only 3000 or so copies during Melville’s lifetime.  But is it possible that Melville was describing an actual whale that he had seen?  Moby Dick had a condition known as leucism (sometimes spelled leukism) a condition that affects individual animals resulting from defects in cell pigmentation.  Unlike albinism, which is the absence pigmentation, leucistic individuals can have varying levels of pigmentation and de-pigmentation.  The word leucism comes from the Ancient Greek word λευκος (leukos) meaning white, while the word albino comes from the Latin word albus, also meaning white.

If you haven’t read Moby Dick, today is a great day to start: Moby Dick.

Image of Migaloo, a leucistic humpback whale by Jenny Dean.