Why I praise Raam and not Ravana? 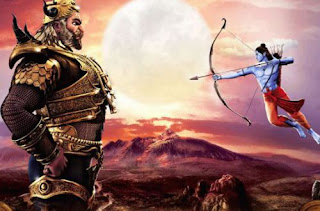 The stories of Ramayana has always stirred my thoughts since childhood. Different characters of this epic, whether its Manthara, Dashratha, Viswamitra, Janak, Bharat, Guha,  Jatayu, Hanuman, Angad, Shugriva, Vibhishana, Surpanakha, Sabari or any other  are interwoven in my decision making in personal and professional life. This Dussera, I received many WhatsApp memes, Facebook and Twitter posts praising Ravana and accusing Raam for not taking care of his own wife. This forced to me share my thoughts here.
First admiration of Ravana is found in argument that “Ravana respected Sita though he abducted here”. It is clear from stories that Ravana kidnapped Sita. But it’s not Ravana who respected Sita, its Mandodari (ravana’s wife) who didn’t allowed her husband to bring “other women” in house without consent of that women. Mandodari forced Ravana follow basic rules of household (were one cannot forcefully bring women in house) and told him that if fails to abide these rules, the city of Lanka will burn to ashes. That’s why Sita was kept in courtyard and Ravana strived to get her consent to his wife. Raam ofcourse “Won” Sita, but married to her with consent and commitment (of not allowing other women in his life), while Ravana cheated Sita as well as his own wife. Cheating a women and showing her respect stands as invalid principle for me.
Another interesting argument exists that  “Ravana was great scholar and devotee of Shiva”.  A person who has abducted someone’s wife, a person who has urged a war wherein his sons, brothers, soldiers & subjects died and still don’t want to let go his desire and ego is definitely not a scholar.
Some folklores about Ravana says that Ravana demanded Parvati (wife of Shiva) to be his wife, Shiva (since Shiva is beyond social definitions, he don’t understand concept of wife) says its ok…Ravana can take away Parvati…Parvati gets furious on this boon and scolds Shiva…on what basis he gave away his wife…Shiva said…he can’t understand idea of wife…wife is not property nor its responsibility… nothing is wrong in gifting best creation of nature to a devotee like Ravan …Shiva said it a gentle smile….and also said, that he cannot take back his boon…so Parvati creates replica of her from female frog…which was given to Ravana as a wife named Mandodari. This makes it clear that Ravana worshiped Shiva for the sake of fulfilling his desires and lusts which do not make him true devotee.
The episode of “Agnipariksha” is also very popular and debated. The recent versions of Ramayan (especially Tulsidas Ramayan which appeared after Manu Smirit upholds caste system and patriarchal values) focuses an idea of chastity of women. It says that Raam forced Sita to walk through fire to prove her chastity as she stayed in someone else’s house for a year without her husband. But in original version (Valmiki Ramayana) it’s a very romantic episode where Sita intends to purify herself as soft and shining as gold before meeting her husband after long time. The romantic scene of wife dressing up (purifying) for her husband is interpreted in very narrow terms. Raam and Sita never had an issue of trust, they both trusted each so well that they never ever demanded proof of commitment or chastity from each other (some tv series used Agnipariksha incident to spice up melodrama).
The most important episode of Ramayan which influenced me a lot is when Raam asks Lakshman to takeaway Sita from palace of Aayodhya and drop her in forest. Raam justifies this act by saying that he cannot compromise with ideals of serving people as a king. As a king, he has to support ideas of his subjects however cruel it is and however personal sacrifice it demands. Sita understood dilemma of her husband and moved away from palace to forest without any argument. She knew that Raam is ideal king of Aayodhya (unlike Dashratha who fought many wars and had three wives or unlike Bharat who set entire administration of Aayodhya on “auto pilot” mode when Raam was in forest) , and if she’ll argue to stay with him, Raam would also join her in forest. She wanted to Raam to serve Aayodhya and became role model for upcoming generations. Thus, Sita resolved the conflict between professional life and personal life for Raam. Also, Raam fulfilled his commitments to Sita by not re-marrying to other women after Sita left.
Raam thus choose his professional life over personal life… principles over rule…. sacrifice over pleasure…. duties over desire…. loved with empathy...allowed his kin to flourish...he served his nation…with all wholehearted support from his beloved wife, family and clan….
On other side… Ravana choose personal life over professional life…broke rules…sacrificed others for own pleasure…loved with lust…choose exploitation over empathy…forced his kin to die for him…. he ruled his nation…with no support from his wife, family and clan…
and that’s why I follow Raam and not Ravana…..

Raam Tamil Movie | Aarariraro Video S…
Yoga is as Simple as Taking A Seat: C…
10 Facts you need to know about Diwal…
Status Of Indian Women – As Seen Thro…
To the Top of Hanuman’s BirthPlace An…

Why I praise Raam and not Ravana?