This story is a multimedia piece that incorporates audio, text, and photos. To experience the full story, click the play button on the audio players underneath each section.

Immigration and Customs Enforcement (ICE) detains individuals in the over 200 Detention centers in the United States. Immigration detention centers operate out of privatized for-profit facilities, by contracting out ICE facility management – with about 80% of ICE detention beds being managed by privatized for-profit companies. The facility in Adelanto is one of these 200, which is located approximately 88 miles from downtown Los Angeles.

Interact with the map below to zoom in on the ICE detention center in Adelanto, CA

The Daily Sundial · Chants from protesters at the Metropolitan Detention Center in downtown Los Angeles on Sept. 23
September 23 marked a national day of action by immigrant rights activists to demand the Biden administration halt deportations and shutdown immigration detention centers. Mass deportations of predominantly Haitian migrants were authorized by the Biden Administration using a policy re-introduced by former president, Donald Trump. Title 42 allows government regulation of individuals entering the United States due to public health concerns. Amidst the COVID-19 pandemic, the Trump administration’s interpretation of the 1944 clause led to rapid mass deportations along the United States southern border. 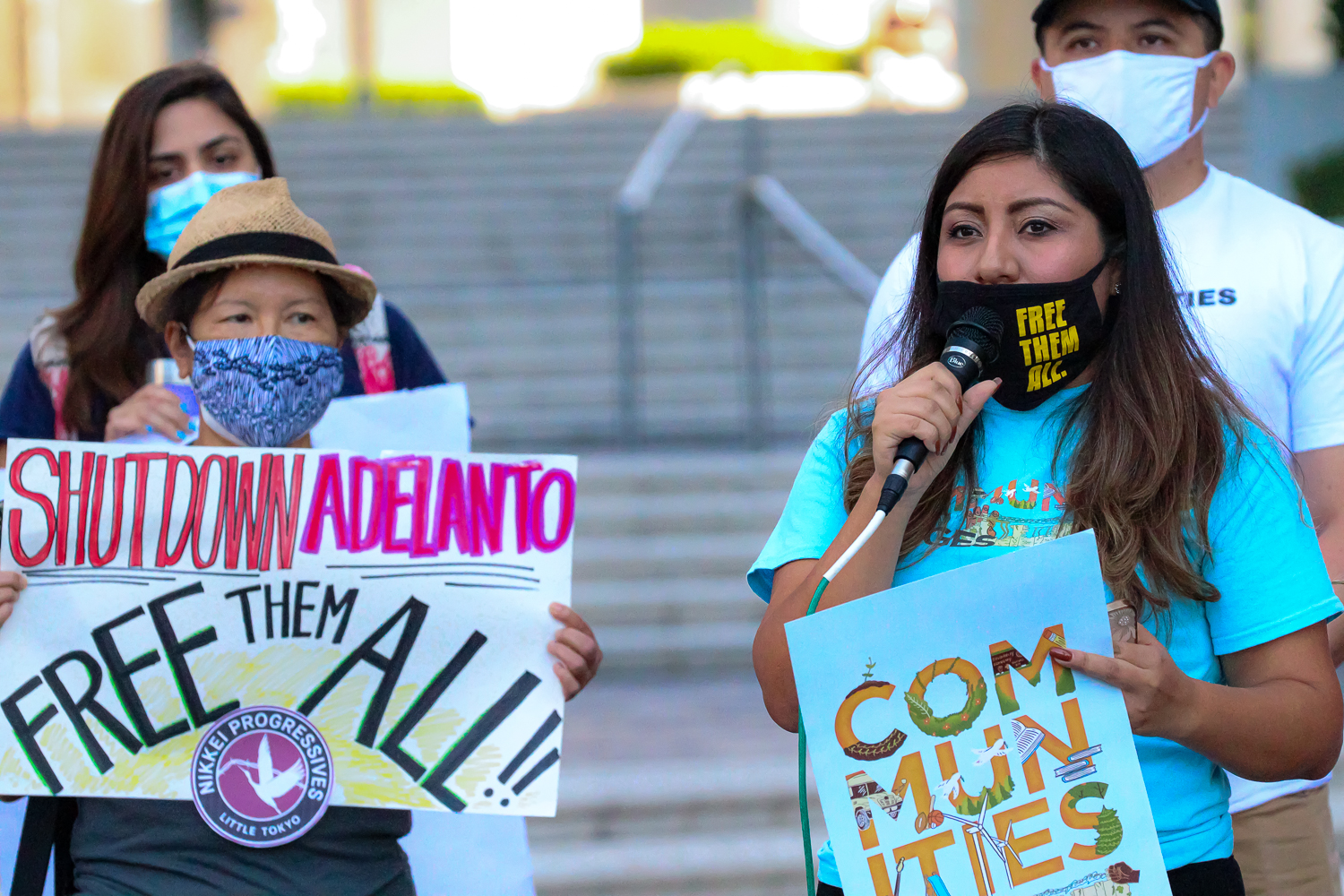 The Daily Sundial · Ramon Valdez shares his experience at the Adelanto Detention Center
Valdez was first detained at an ICE detention center in Eloy, Arizona for 48 months, 40 of which were spent in a mental health unit. It’s also where he attempted to take his life, twice. Valdez was then transferred to the Adelanto detention center, where he spent just over two years of his life. During that time, the U.S. Environmental Protection Agency released an inspection report citing the use of pesticides at the Adelanto ICE Processing Center, which is in violation of the Federal Insecticide, Fungicide, and Rodenticide Act (FIFRA). 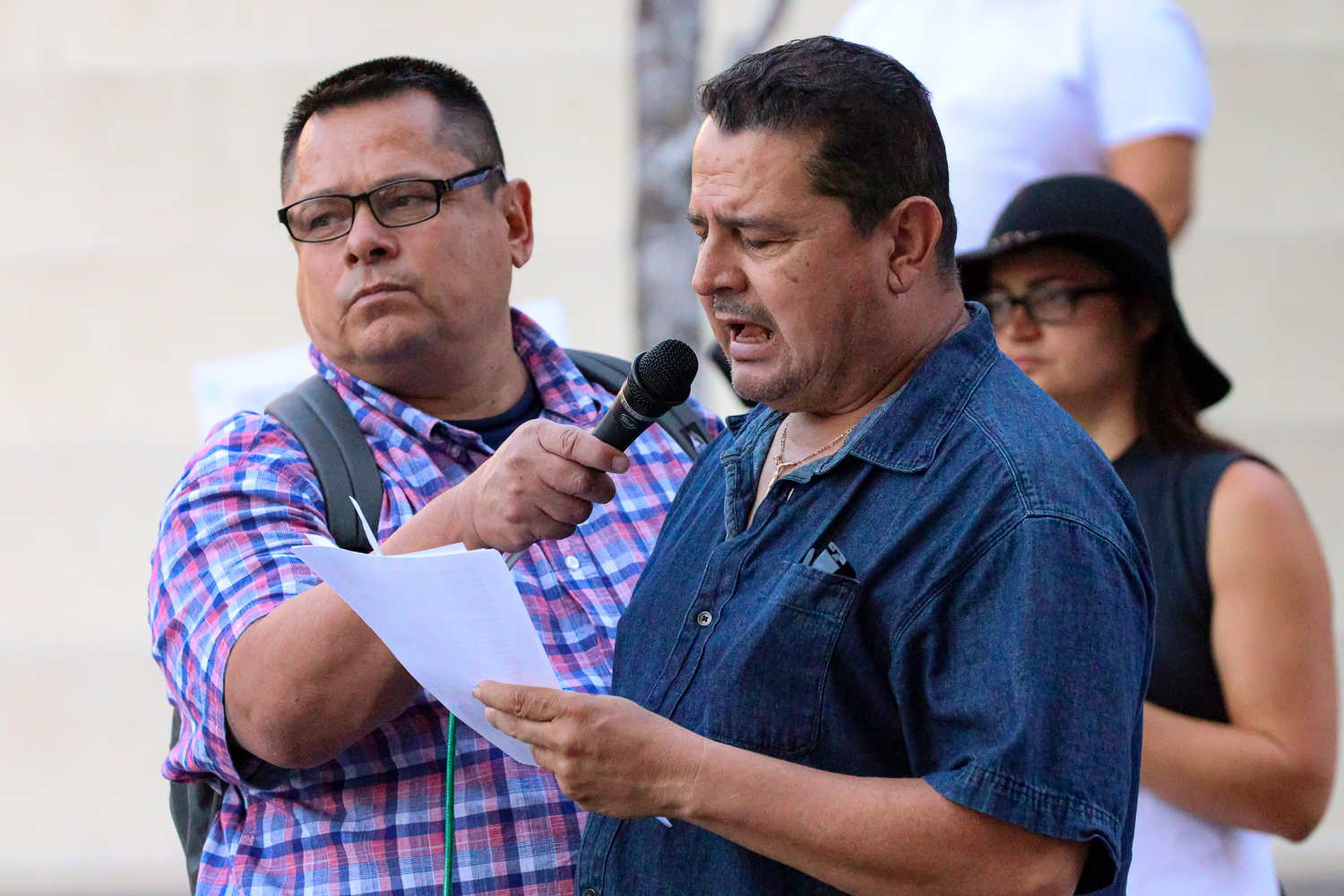 Ramon Valdez shares his experience as a detainee inside the Adelanto detention facility at the national day of action protest in downtown Los Angeles on Sept. 23, 2021. Photo by Kaitlyn Lavo

Margaret Hellerstein is an attorney with the Esperanza Immigrant Rights Project. The organization is a nonprofit, providing legal representation and resources for those inside ICE detention centers…

The Esperanza Immigrant Rights Project is a social services project by the Catholic Charities of Los Angeles. Their services include community education, free direct legal representation for youth in immigration removal proceedings, and pro bono legal services for adults. Margaret Hellerstein is an attorney with the group.

GEO Group is one the country’s largest profiteers in the privatized prison industry, bringing in about $112 per detainee a day, which is paid by Immigration and Customs Enforcement (ICE). GEO Group runs the Adelanto Detention Facility which has an occupancy of 1,940 beds. The city acts as a go-between for the ICE federal agency and the for-profit private prison company, GEO Group, by way of contracting. 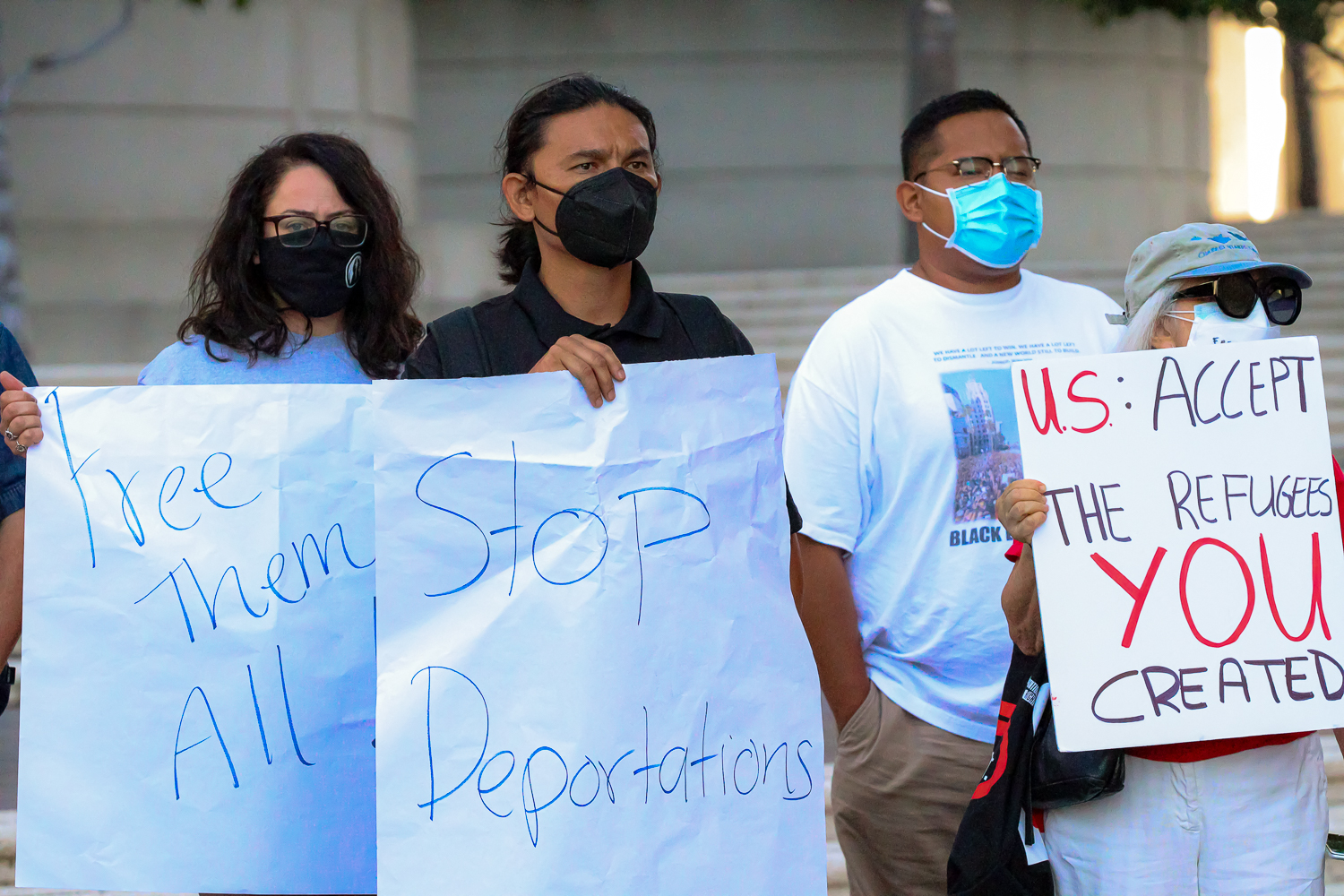 Protesters at the at the national day of action protest in downtown Los Angeles on Sept. 23, 2021. Photo by Kaitlyn Lavo

Ana Solodovnikova spent two years inside the Adelanto ICE detention center after becoming a victim of human trafficking and obtaining a criminal record, this is her story… 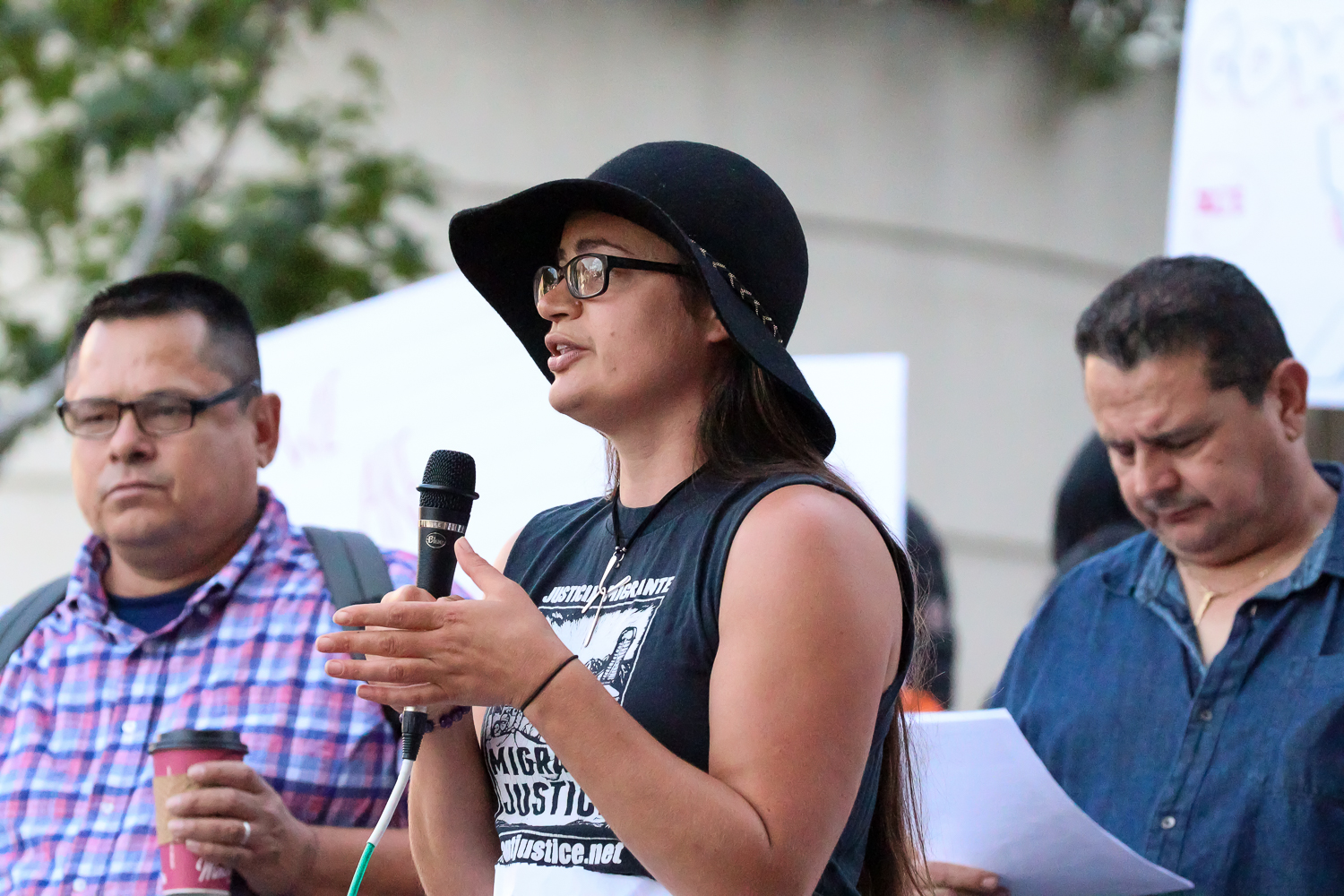 Ana Solodovnikova shares her experience as detainee in the Adelanto detention facility at the national day of action protest in downtown Los Angeles on Sept. 23,2021. Photo by Kaitlyn Lavo 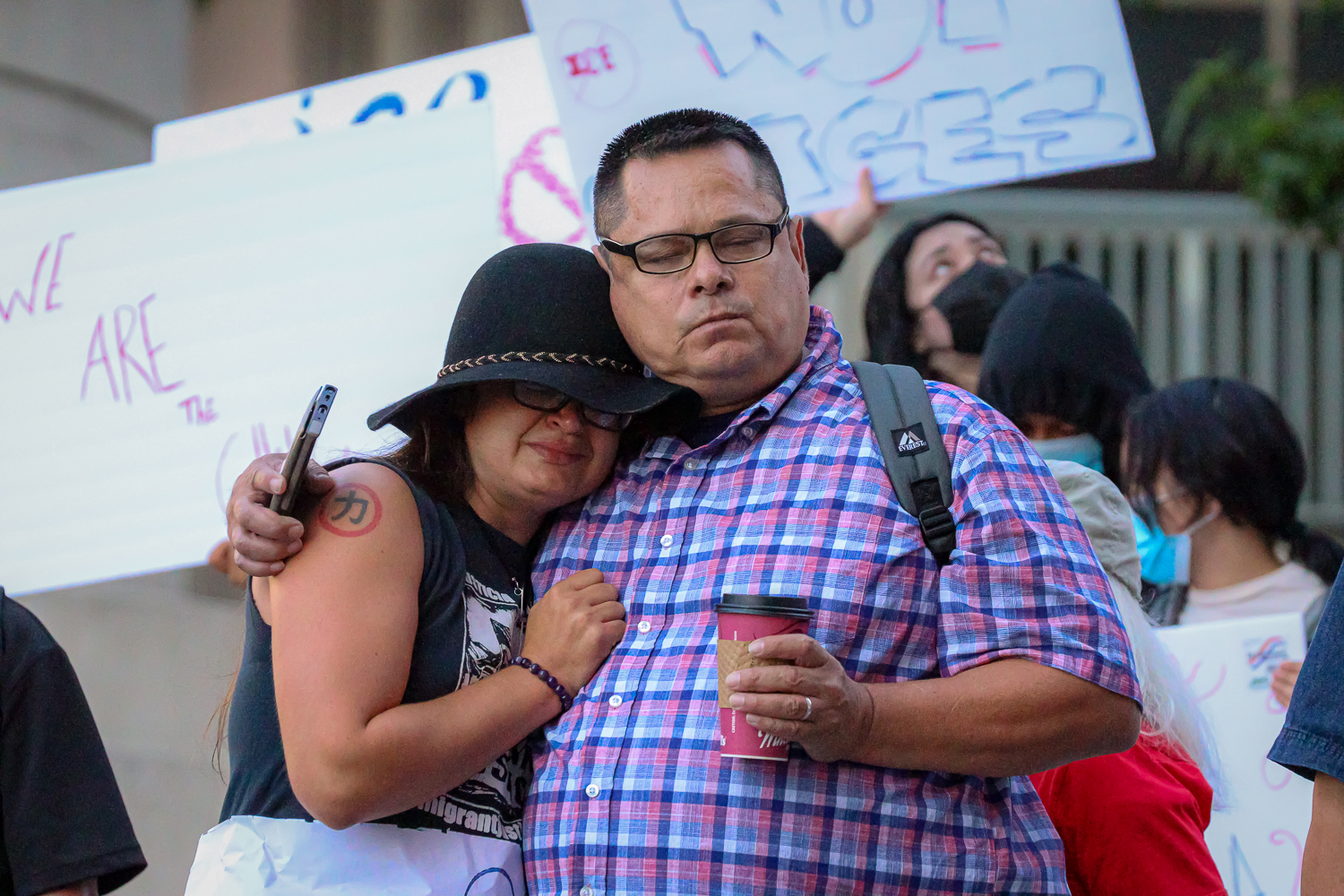 Ana Solodovnikova and Jose Tapete share an emotional moment at the national day of action protest in downtown Los Angeles on Sept. 23, 2021. Photo by Kaitlyn Lavo