It was the Matadors’ first game since March 6, 2020 due to the COVID-19 pandemic. The Matadome was filled with tons of support from both friends and family who kept the energy high all game.

CSUDH started the game with a 3-0 Lead, but a 3-pointer from Csun Guard Anaiyah Tu’ua would tie it at three. CSUN guard Meghann Henderson drove to the basket with less than five minutes left in the first quarter, but missed her layup off the bottom of the backboard. An offensive rebound and layup by CSUN forward Tess Amundsen gave CSUN a 7-3 lead.

Dominguez Hills forward Asia Jordan was rewarded for her hustle as she got the offensive rebound and got fouled on her shot attempt. Jordan went two for two at the free throw line and managed to tie the score at seven.

CSUN guard Sydney Woodley stopped on her fastbreak and turned around to find CSUN guard Jordyn Jackson. With less than three minutes to go in the first quarter, Jackson shot a 3-pointer and got nothing but net to take the lead 12-9. 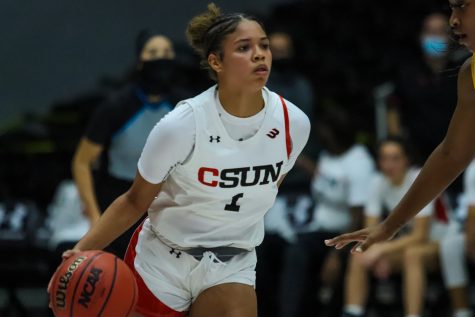 Jordyn Jackson in poession who also scored the most points in the game. Nov 15, 2021. Northridge, CA. (Connor Clark)

“It honestly feels so great,” said Jackson, who had a team high 19 points. “Before the game even started a couple of us were just emotional because we took a year off, so since we got to play in front of our family and our friends it felt really good.”

CSUN guard Rachel Harvey fouled CSUDH guard Auren Isaacson as she headed to the line for two free throws to make the score 14-11. The first quarter ended 14-11, with seven of the 11 Toros points coming from free throws.

CSUN guard Macy Smith made an immediate impact off the bench as she drained a 3-pointer for the first basket of the second quarter and extended the CSUN lead to six (17-11). Jordan got a steal for the Toros and took it from one end of the court to the other for a layup, making it 17-13.

Jackson was able to get a four-point play after making a 3-pointer and her free throw. Another three from Smith extended the Matadors’ lead (24-13).

Isaacson answered with back-to-back 3-point shots from the CSUN logo, making the score 24-19 with less than six minutes remaining in the half. A crafty move by Jackson inside the key helped her lose her defender, leading to a mid-range jumper and making the score 26-19.

With two minutes left in the half, a fast break by the Matadors had Smith pass the ball to CSUN forward Olivia Smith for an easy layup. The half ended with the Matadors ahead 33-25. 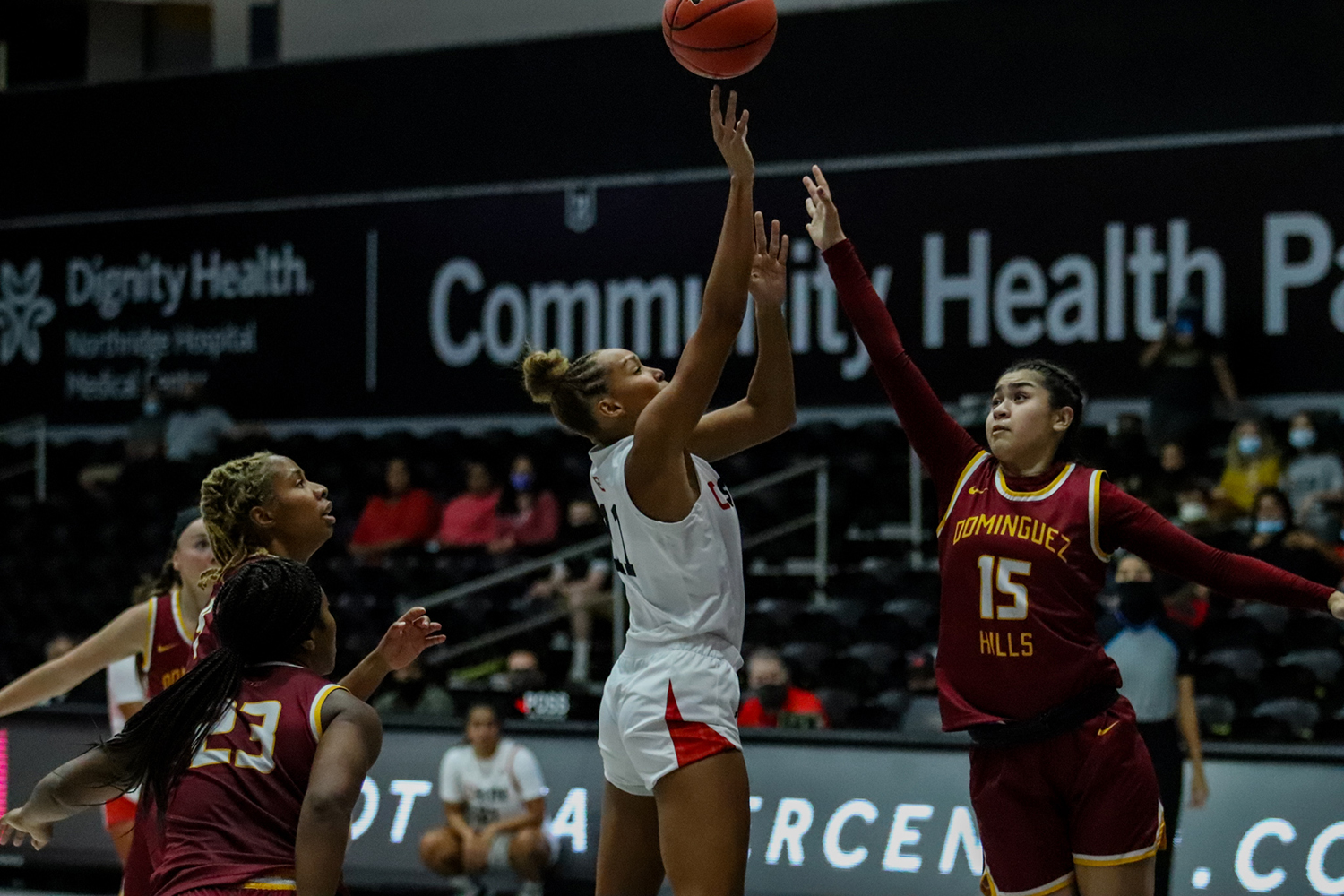 The Toros brought the score within three (39-36) after a nifty post move by forward Hosanna Walker. The Matadors went on a 12-2 run with CSUN forward Michelle Duchemin scoring six straight points off the bench, giving the Matadors a 51-38 lead. The third quarter ended with CSUN leading 55-44.

The fourth quarter started with a quick three from Bell, which brought the Toros within single digits (55-47). Woodley pushed CSUN’s lead back to 10 (57-47) after she drove to the paint and put up a contested shot.

Amundsen made a 3-point play, which extended the Matadors lead to 62-47. A spot-up 3-point shot from the top of the key by Jackson gave CSUN a 67-56 lead.

The Matadors led by 10 with two minutes left, but the Toros would not go down without a fight. Back-to-back 3-pointers from Isaacson put CSUDH within four (71-67) with 36 seconds left.

A turnover by Jackson before she crossed half court gave the Toros another opportunity to score. But a missed 3-pointer from Isaacson and Bell put an end to the comeback. The Matadors held on for a 72-67 victory.

“You always gotta take a win,” said interim head coach Carlene Mitchell. “It’s a young team, of course you would like to have a blowout and sit down and relax but at the end of the day we have a lot of work to do.”

CSUN is looking to get their second win of the season when they travel to Westwood to take on No. 20 UCLA (1-0) on Thursday.