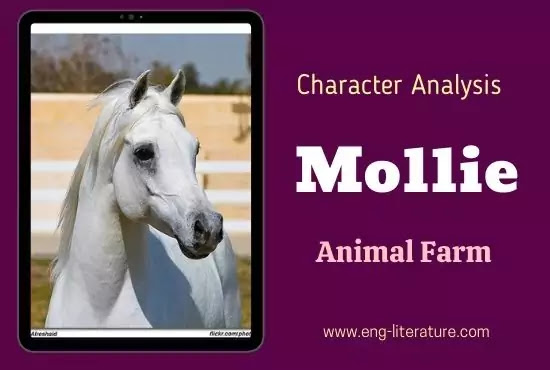 Mollie in Animal Farm, the foolish, pretty white mare who drew Mr. Jones' trap, is vain and fond of luxuries, and her only concern about the Rebellion is that it might deprive her of her sugar and ribbons. One of her first action after the uprising is to finch a piece of blue ribbon belonging to Mrs. Jones.

The Keys to Business Success | 20-Poi…
5 Buying Trends that Will Outlast the…
Spider-Man: If This Be My Destiny - L…
Sex Tips for Men: How to Be Better in…
Office Life

She also shirks her duties, gets up late for field work, and leaves early by making excuses such as that there was a stone in her hoof. Moreover she refuses to learn more than the six letters of the alphabet which spell her own name. She is not only vain and lazy, but also cowardly, and during the Battle of the Cowshed she hides in the stall with her head buried in the hay in the manger.

Thereafter she becomes more and more troublesome complaining of mysterious pains to avoid work, though her appetite remains excellent. She spends her time gazing at her own reflection at the drinking pool. Even worse is to fellow. One of the neighboring farm hands befriends her and gives her ribbons and sugar in secret, and soon afterwards she disappears from Animal Farm forever.

Clearly, then, Mollie is not the stuff out of which successful revolutions are made. Unlike the other animals on the farm she has been spoilt and pampered by humans, is incapable of hard work, and so ultimately saves her comrades from further embarrassment by defecting to the hated race of men. Mollie symbolizes those members of the middle and working classes who had no liking for reform which interfered with their own pleasures. Some of these were fortunate enough to escape from Russia in the years immediately after the Revolution.

5 Buying Trends that Will Outlast the Pandemic