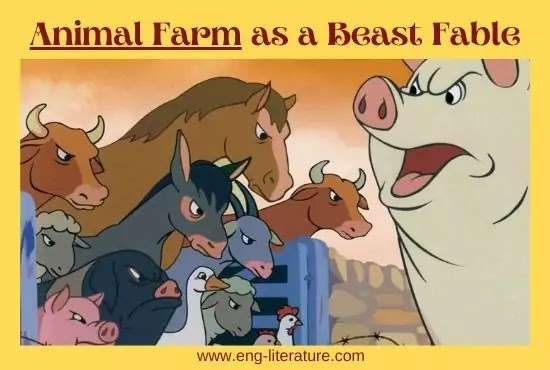 A fable is a short moral tale, in verse or prose, in which human situations and behaviour are depicted through beasts and birds, or gods or inanimate objects. In the beast fable animals talk and act like the human types they represent. In the familiar Fable of the fox and the grapes, the fox-after vainly exerting all his wiles to get the grapes hanging beyond his reach—concludes that they are probably sour anyway: the express moral is that men belittle what they cannot get.It usually takes a f

An early set of beast fables was attributed to Aesop, a Greek slave of the sixth century B. C. In the seventeenth century a Frenchman, Jean de la Fontaine, wrote a set of witty fables in verse which are the classics of the literary kind. Chaucer's The Nun's Priest's Tale, the story of the cock and the fox, is a beast fable; John Gay wrote a collection of fables in the eighteenth century. The fable has twentieth century practitioners, too. In America, James Thurber wrote Fables for Our Time(1940).

In Animal Farm (1945) George Orwell employed the beast fableas the vehicle for an extended satire on the totalitarian state. In his use of the beast fable Orwell may have got the immediate model in Rudyard Kipling's Jungle Book, a collection of stories for children.

The beast fable is a form that is used to remove a sequence of action from the day-to-day world so that we can see it in some kind of perspective that we might not otherwise find. In this particular case, the beast fable allows us to view the rise and fall of change in society with some detachment to see more clearly what happens to the social ideal and how it fails. If the characters had been human beings, a greater emphasis would have been placed on the characters themselves, and the reader's reactions would have focused on the human emotions, rather than on the forces and activities involved in the failure.

To be successful, a beast fable must capture the right balance between human characteristics and animal characteristics in its portrait of the animal. The animals must be human enough so that we can see that the situation does apply to human beings and so that we can recognize the animals as at least vaguely representative of types of human beings. Orwell is successful in finding this balance. Boxer is a loyal, hardworking, and rather unintelligent horse. Coupled with his size (nearly eighteen hands tall), these are characteristics which one might well imagine a horse to have if a horse could talk and had a personality. The pigs, of course, become increasingly human, but that is part of the theme of the novel, they do move, however, from animals with a few human traits to almost literal "humans" with a number of animal traits.

👉Animal Farm as a Political Allegory

The animal fable suits Orwell so well because he is able to write by his higher standard of pure moral integrity. It is the moral decisions in political life that he is always concerned with, and here he has found a form which permits him to ignore anything else. Animal Farm does not allow for necessities which must always in some measure force the hand of even the most despotic rules: these lie outside its convention, which is moral. Had Orwell chosen a more discursive form he would have felt bound to consider every objection of this sort, if only afterwards to discount it.

The observance of the convention in Animal Farm is a skillful act of balance. The animals must be close enough to their human patterns for easy recognition, yet not so close as to invite complex speculations about motive and the psychological depths of their personalities. Some details are clearly there for themselves alone, as when we are told that Mr. Jones sits on a Windsor chair or that Napolean is a Berkshire boar, the concrete detail and the circumstantial irrelevance are the basis of the atmosphere of authenticity which must be built up before the story can hold any of the weight of allegorical meaning.

The animal fable has the advantage of simplifying our response to the issues involved and this simplification involves humour. The humour of Animal Farm, when it is not just so 'humour', is Dickensian, achieved by the use of the unnecessary detail" which Orwell in his critical essay had identified and given examples of and relished as "the unmistakable mark of Dickens' writing." For instance an important stage in Comrade Napoleon's gradual abandonment of the principles of animalism occurs when he sits down at table to eat. But in relating this, Orwell tells just a little bit more; "he always ate", he tells us, "from the Crown Derby inner service had been which in the glass cupboard in the drawing room." This comic surface of the prose is the major effect of Animal Farm. In passages scattered throughout Animal Farm Orwell keeps up the light-hearted tone necessary for the convention.

Both satire and irony are achieved through the beast fable. Orwell keenly satirizes human beings and their methods of dealing with social change and with social responsibilities. Even though Boxer remains horse throughout the novel, he also represents a certain human response to situations and problems; the comparison does not flatter the human who responds in the ways in which Boxer responds.

Irony is also developed through the nature of the characters. The major irony in Animal Farm is the way in which the pigs turn into human beings. This is a reversal of expectations, for the pies were supposed to lead the animals into the “brave new world” of Old Major's vision; instead, they led the unsuspecting animals into a world in which the animals were eventually worse off than they were before. Even though one of the novel's climactic scenes has been prepared for, the scene in which the pigs parade around the yard on their hind legs a shock. The reader understands each of the new actions that the pigs instigate better than the animals do, providing the reader with an ironic insight into the situation on Animal Farm and with a clearer perspective about the nature of political manipulation.

There is another way in which the animal allegory suits Orwell - it provides him with a pastoral setting. The question of Revolution is nicely separated from industrialism, which was something Orwell was not fond of, quite apart from its capitalist manifestation. In Animal Farm industry is neatly symbolised by the windmill, which however, in no way transforms the landscape. The aim of the Revolution, as expressed in its song, was the creation of a pastoral paradise:

Bright will shine the fields of England,

Purer will its waters be....

reminiscent of that forgotten clause of the Communist Manifesto which promises the eradication of the difference between town and country. And as the book progresses, the descriptions of the beauty of the fields present an ever more pathetic contrast to the terror and slaughter of the pigs' regime.

Richard Rees has criticized Orwell's use of the beast fable in Animal Farm. He says that “by comparing the working class to animals, even noble and attractive ones, he implies that they are in an irremediable disadvantage in the class struggle." But Orwell took full advantage of the opportunities for pathos. When Boxer, that loyal cart-horse who has carried the main burden of the farm's work, is sold by the pigs to the knacker we weep for the terrible pity of it like children who meet injustice for the first time.

Orwell called Animal Farm 'fairy story' but many fairy stories use the conventions of the animal fable in whole or in part. Fairy stories and animal fables relax the laws of everyday experience because such a relaxation is pleasurable, but also because it is often a very useful way of clarifying about our everyday life. Animal Farm is an animal fable where the laws of ordinary life are not in strict operation, and yet, as the tale goes on, we find in it a humorous account of the evil effects of power.

We could sum up the advantages of animal fable as follows: