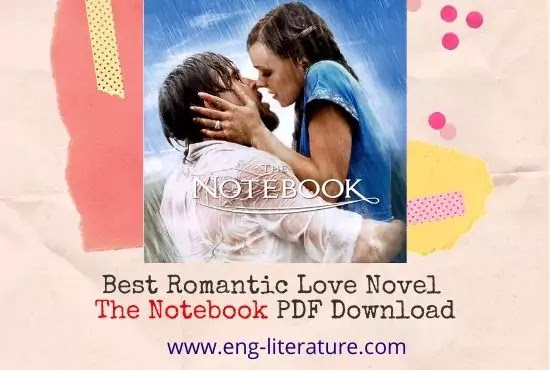 The Notebookis a contemporary love story set in the period of Pre and Post World war II. The story revolves around Noah and Allie who spend one summer together when they were still young and carefree.

The Notebook is a poignant story of true and unending Love in its purest form, and the power and magic of love to defy all odds. It begins with an elderly man, sitting by his wife's bedside, reading her a story. From there, we travel back in time to when star-crossed lovers Noah and Allie met as teenagers in 1932 and spent one magical summer together. They were from opposite sides of the tracks. Allie was from a well-to-do family with political connections, and Noah was more or less a nobody. An aristocratic type system still prevailed in the South, so Allie's family didn't approve of a match with Noah and the two were separated for fourteen years. Noah moved to New Jersey where he worked for several years before joining the Army and heading for Europe to fight in WWII. Allie went to college, abandoned her artwork of which her parents did not approve, and eventually became engaged to an attorney of whom they did approve. Over the years, neither was able to forget the other. Noah has had no successful relationships since, because the ghost of the time he spent with Allie still haunts him, and deep down, Allie knows there is something missing in her relationship with her fiancé.

Neither really knows what became of the other until Allie sees a picture of Noah in a local newspaper just three weeks before her wedding. Seeing him again, stirs memories and emotions, and even though she doesn't really know why at the time, she is compelled to go see him in person one last time before getting married. She tells her family and fiancé that she needs to get away from the stress of wedding planning and heads for New Bern alone. Noah can hardly believe his eyes when the woman of his dreams pulls up in front of his house one day out of the blue. The longing and desire between Noah and Allie is extremely moving and palpable and hasn't dimmed one bit in fourteen long years. I love how they slip right back into a comfortable relationship as though they've never been apart. It's obvious that they're soul mates and perfect for each other, and in their heart of hearts, they know it too. After only one evening with Noah, Allie knows that what they share is something she's never had with her fiancé and never will.

At the point when Allie must make her fateful decision about which man she is going to choose, the story cuts back to the elderly man and his wife who we discover has Alzheimer's. This part of the book is so powerful and affecting, I read parts of it through a blur of tears. The lengths to which this man goes to help his wife remember the love they share is moving beyond words, an expression of a true and pure love. The way he romances her and gets her to fall in love with him over and over again and persists in doing it day after day, never giving up even when it doesn't always turn out the way he hopes is potent stuff, so much so that I'm sitting here crying my eyes out while writing this. It's the kind of love I think we all hope for, but so few seem to actually achieve.

Many readers seem to categorize The Notebook as romance, but I don't see it as such. For me, romance as a genre, usually only follows the couple through the falling in love stages of the relationship with the happily ever after implied. It taps into the fantasy of what we want love to be, while The Notebook takes that one step further. Not only do we get to see the beginnings of a relationship, we also get to see one very advanced in years, but no less passionate for the passage of time. It also takes a more realistic look at what it truly means to love someone. It's not just the gooey feeling we get when first falling in love or the sexual desire that soon follows. It's something that can last a lifetime when nurtured and a couple is fully committed to one another. Make no mistake, The Notebook is very romantic, but to me it is not merely a romance, but a love story.

A man with a faded, well-worn notebook open in his lap. A woman experiencing a morning ritual she doesn’t understand. Until he begins to read to her.  The Notebook is an achingly tender story about the enduring power of love, a story of miracles that will stay with you forever. Set amid the austere beauty of coastal North Carolina in 1946, The Notebook begins with the story of Noah Calhoun, a rural Southerner returned home from World War II. Noah, thirty-one, is restoring a plantation home to its former glory, and he is haunted by images of the beautiful girl he met fourteen years earlier, a girl he loved like no other. Unable to find her, yet unwilling to forget the summer they spent together, Noah is content to live with only memories. . . until she unexpectedly returns to his town to see him once again. Allie Nelson, twenty-nine, is now engaged to another man, but realizes that the original passion she felt for Noah has not dimmed with the passage of time. Still, the obstacles that once ended their previous relationship remain, and the gulf between their worlds is too vast to ignore. With her impending marriage only weeks away, Allie is forced to confront her hopes and dreams for the future, a future that only she can shape. Like a puzzle within a puzzle, the story of Noah and Allie is just beginning. As it unfolds, their tale miraculously becomes something different, with much higher stakes. The result is a deeply moving portrait of love itself, the tender moments, and fundamental changes that affect us all. Shining with a beauty that is rarely found in current literature, The Notebook establishes Nicholas Sparks as a classic storyteller with a unique insight into the only emotion that really matters.

Crunchyroll – How to Watch Anime Onli…
Best Low Acid Coffees That Won’t Upse…
With GiftstoIndia24x7.com, this Raksh…
How and Why America Was Hit So Hard B…