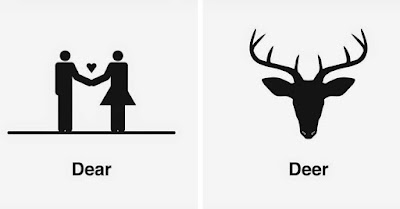 English is full of words that sound similar or identical, but that mean different things. Only in English can you “stare at the stair,” “sail to the sale,” “break the brake,” or “brush the hare’s hair.” Such words are called HOMOPHONES.

HOMOPHONES - Each of two or more words having the same pronunciation but different meanings, origins, or spelling.

It can be hard to remember which spelling refers to which meaning. As a result, sound-alike words are often used incorrectly in writing. (In spoken English, of course, sound-alikes are not an issue. Spelling doesn’t matter when you talk!)

This post includes fourteen sound-alike word groups that tend to give writers fits. Read the definitions, and memorize the helpful hints. You’ll be on your way to better written grammar in no time at all!

In its most common usage, “except” is a preposition. It means with the exception of: Everyone except Hector went to the circus. “Accept” is a verb. It means to receive, approve, or believe: Denise accepted the award. I was accepted to the gifted program. I accept what you’re telling me. To keep “except” and “accept” straight, remember that “a” is the first letter of the word “action.” “Accept,” which is a verb and therefore an action word, also starts with “a”.

The word “effect” is also sometimes (though not often) used a verb. As a verb, the word means to make something happen: That new law will certainly effect change.

To keep “affect” and “effect” straight, apply the same rule you learned in the Tip 1. “Affect” is an action word “effect” usually isn’t.

A “capitol” is a building where a state’s or country’s government meets: The officials gathered in the capitol.

The noun “capital” has several meanings. A capital may be the city that contains the capitol: Pierre is the capital of South Dakota. It can refer to wealth: She will need a lot of capital to start her own business. It can mean an uppercase letter: Always use a capital at the beginning of a sentence. And finally, it can refer to the main or most famous city in a certain respect: Philadelphia is sometimes called cheesesteak capital of the world.

If you get mixed up, just remember that “capitol” only means a government building. For every other usage, “capital” is the correct word.

“Compliment” can be a noun or a verb. As a noun, it means a flattering remark: She always receives lots of compliments when she wears that beautiful dress.  As a verb, it means to give a compliment: John complimented Lara on her new hairdo.

“Complement” can also be a noun or a verb. As a noun, it means something that completes or improves something else: Gravy is the perfect complement to mashed potatoes. As a verb , it means to complete or to improve: The players’ styles complemented each other nicely.

It may help to picture the word “complement” as “comple(te)ment.”

“Stationary” is an adjective. It means staying in one place: Judy exercised by riding the stationary bicycle.

“Stationary” is a noun. It means writing materials: Lisa’s stationery is covered with pictures of teddy bears.

To tell the difference between these words, remember that “stationary”, which is an adjective, is the word that contains the “a” instead of the “e” – and “a” stands for adjective.

“Principle” is a noun. It means a basic rule or assumption: He struggled to learn the principles of geometry. “Principal” can be a noun or an adjective. As a noun, it usually means the leader of a school or business: The principal gave me detention. The executives wrote a report for the principals. As an adjective, it means most important: Lester has the principal role in the play.

Here’s a memory shortcut for you. Remember this phrase: “The principal is your pal.” That takes care of the noun version of the word. As for the rest…. Well, once again, the “a” in “principal” stands for “adjective.”

“Then” is an adverb. It indicates a time sequence: Carrie sneezed, and then blew her nose. “Than” is usually a conjunction. It indicates a comparison: My brother is two years older than I am. That’s easier said than done.

“Further” can be an adverb or an adjective. As an adverb, it means to a greater degree: The disobedient child further annoyed her tired mother. As an adjective, it means additional: Eddie needed further help.

“Farther” can also be an adverb or an adjective. As an adverb, it means to a greater distance: The library is a little farther down this road. As an adjective, it means more distant: There are more coconuts on the farther side of the island.

Remember that in either form, the word “farther” always involves measurable distance. If you could use a ruler on something, “farther” is correct. If not, “further” is the word you’re looking for.

In their verb forms, “lie” and “lay” are two of the, most commonly confused words in the English language. So if you have a trouble in this area, you are not alone!

It Might help you to remember that “lay” always requires an object. That is, you must always say what you’re laying for this word to be correct. You can “lay down the law” (lay what? The law) but you can’t “lay on the bed” (lay what? A pillow)

There is no simple solution to this grammar challenge. Practice until you get it right!

“Sit” is not often used in place of “set.” “Set,” however, is commonly misused. You might hear someone saying, “I think I’ll just set here awhile.” Wrong!

Here’s a hint. Like “lay,” “set” requires an object. If the object is missing, you know the word “set” is wrong.

A lot of people make this mistake, but it’s actually an easy one to avoid if you remember that “it’s” is always a contraction for either “it is” or “it has.” In every other circumstance, “its” is correct

Right: The bird carries worms to its babies.

When in doubt, substitute the words “it is” for “its” or “it’s.” It is a bad idea sounds right, so you know the contraction “it’s” is appropriate. The bird carries worms to it is babies, however, is obviously wrong, so you must go with “its.”

These words, too, are easy to tell apart if you remember that “you’re” is always a contraction for “you are.” In most other circumstances, “your” is correct. (There is another sound-alike word, “yore,” which means long ago. But most people don’t use this word too much. “You’re” and “your” are much more common.)

In these examples, “you’re” and “your” are used correctly:

Can I borrow your book?

Use the same substitution trick you learned in Tip 10 if you are not sure which word to use. You’ll see very quickly that You are my best friend is correct while Can I borrow you are book is not correct.