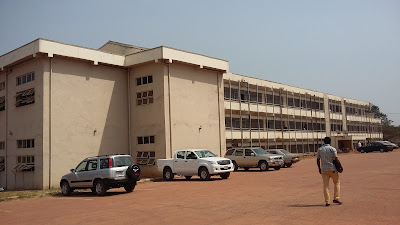 Mass Communication
HISTORY OF THE Department OF MASS COMMUNICATION
In 1961 history was made in sub-Saharan Africa when a Department of Mass Communication, then known as the Jackson College of Journalism was established at the University of Nigeria, Nsukka with a virtually North American style of school of journalism curriculum including heavy doses of advertising and public relations. The initiative to set up the department was that of the founding father of the university, the late Dr. Nnamdi Azikiwe, the doyen of West African journalism. With the establishment of the department, the dream for formal educational training for journalists and would-be journalists became a reality.
In September 1961, the department, which was then named Jackson College of Journalism, was opened, and the first to head it was Mr. Earl Roe, who incidentally was the only lecturer in the department at that time. It was Mr. Roe who commenced journalism programme for the pioneer students of the department.
In early 1962 barely two years after its establishment, the Jackson College took a giant stride in the field of student journalism by launching the Nsukka Record a weekly newspaper. The idea was to provide a training ground for student journalists so that they would be properly groomed in the nitty-gritty of journalism, namely information, education and entertainment.
In June 1964, Zik’s dream was eventually actualized with the graduation of four of the pioneer students of the college, the first in sub-Saharan Africa. The accomplishment of this goal was highly significant in view of the human and material resources problems that marked the beginning and progression of the college.

Experience Ultimate Relaxation Togeth…
Telegram Marketing solutions
Pineapple juice benefits for skin
How to Lose Weight and Keep it off Pe…
Legit Way To Make Money Online
In May 1964, the College had organized a dinner to mark the graduation event, which, going by its significance, was an event of epochal magnitude. On that historic occasion, Dr. Nnamdi Azikiwe, who was the Chancellor of the University of Nigeria, said, inter alia:
We are making history tonight in that we have gathered here to honour the prospective graduates of the Jackson College of Journalism who will receive their baccalaureate degrees in a few days. This incident will be history in the making, because for the first time in the annals of West Africa an indigenous university will endorse the professional competence of journalists who have passed through the crucibles of systematic university education.
In 1965 the department graduated 10 students. In 1966 it produced 12 graduates, and in 1967, just on the eve of the outbreak of the Nigerian Civil War, it graduated 15 students. This progress was, however, momentarily halted by the ravages of the Civil War, which reduced the College to a shadow of its former self by robbing it of its entire facilities and founding academic staff.
The college came back to life once more in 1967 after the Civil War with its own products as new academic staff. This time the name Jackson College of Journalism was replaced with the Department of Mass Communication to reflect the department’s new course offerings. To complete the newness circuit, the departmental newspaper. The Nsukka Record was revived in 1971 with the name The Record. The year 1971 was another milestone on the road to progress because it marked the production of the department’s first batch of post-war graduates after the wreckage of the war.
The Name Jackson
The department was originally named the Jackson College of Journalism in homage to John Payne Jackson, a courageous newspaper editor, who founded the Lagos Weekly Record in 1891. A daring journalist, Jackson used his newspaper to attack the exploitative and obnoxious policies of the colonial government.
When John Payne Jackson died in 1915, his son Horatio Jackson took over the newspaper and continued in the footsteps of his father. It was in appreciation of the monumental contributions of the Jacksons that the department was named Jackson College of Journalism.
Post-war Performance
As earlier noted, the year 1971 represents an important milestone in the annals of the department in that it marked the beginning of the blossoming of the department into a gigantic school of mass communication. In April 1978, a departmental magazine, the Midworld, was born and in 2006, the name of the magazine was changed to The Jacksonite. From that year to date the performance of the department could be likened to an inverted pyramid denoting a mustard seed growth pattern.
In 1990 the department made a detailed review of its academic programme in response to the demands of the standard of the National Universities Commission (NUC). The elaborate review further enriched the curriculum with innovative offerings in print and electronic journalism, marketing communications, philosophy of communication, history and development of mass media systems with particular reference to the Nigerian mass media, law and ethics of mass communication, mass communication research and theories and photojournalism. These course areas and others are continually being enriched with latest studies.
The department has a pace-setting tradition, which has continued to power it to lofty heights in mass communication. Accordingly, the department revised its undergraduate programme again in 2008 to accommodate the demands of new
communication technologies, which were in fact attempting to redefine mass communication. The department’s newspaper editing laboratory thus became fully computerized in 2008.
In 2006, the department started PGD and Ph.D programmes and revised its Masters programme. In 2007, the department acquired fully digitized radio and TV studios. In 2010 two professors joined the department at once, with a couple others from already existing staff aspiring to that zenith. In the same 2010 the department obtained full accreditation for the first time ever.
It is worthy of note that the Department of Mass Communication of UNN has been living up to its expectations in the competitive field of communication merchandising. The bi-focal role of the department as a pioneer and pace-setter in sub-Saharan African journalism becomes clearer when one realizes that the department was the lone-ranger until the middle 60’s when the University of Lagos joined it in offering degree programme in journalism. Who could imagine that a new department, which started without a building (even when was eventually provided has to use the floor for furniture) could start and never stop. What could engineer such a progress except resolute determination arising from the insight of a visionary Zik of Africa.
BELOW ARE MASS COMMUNICATION PAST QUESTIONS:
MAC212 NEWS WRITING
MAC 221 Announcing & Performance
MC 111 ELEMENTS OF JOURNALISTIC STYLE
MAC211 (CRITICAL & REVIEW WRITING)
MC 241 PRINCIPLESS OF PUBLIC RELATIONS
MAC 221- ANNOUNCING AND PERFORMANCE
>


This post first appeared on UNIVERSITY OF NIGERIA PAST QUESTIONS AND UNIVERSITY GIST, please read the originial post: here
People also like
Experience Ultimate Relaxation Together: Discover the Benefits of a Couples Massage on Your Next Resort Trip!
Telegram Marketing solutions
Pineapple juice benefits for skin
How to Lose Weight and Keep it off Permanently
Legit Way To Make Money Online
Medical Equipment for Molecular Diagnostics Lab