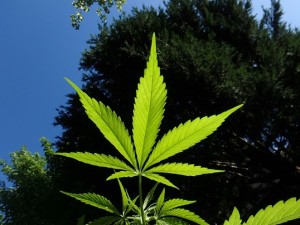 Last week (22 July, 2016) reports surfaced that a small farming community in Hugo, Colorado, was warned not to drink the town’s water because officials had found THC, the psychoactive ingredient found in marijuana, in one of its feeder wells.

The Colorado Department of Public Health and Environment warned residents not to drink, cook with, or bathe in the water and in excess of 2500 bottles of water were distributed to residents.

Apparently a public works employee in Hugo, a town of about 800 people, did the initial screening with a “field testing kit,” and although there was concern for a while, subsequent tests revealed that there was not THC in the water supply.

Experts are still conducting investigations, but according to Susan Kelly, the county’s public health director, there were no reports of anyone falling ill or otherwise being affected by the water. Colorado allows both medical and recreational marijuana use but according to the Colorado Department of Revenue, which regulates the state’s cannabis industry, there are no legal marijuana cultivation sites or dispensaries in the area.

It sounds like this could either be a case of false positives or that someone tampered with the well, as Captain Michael Yowell of the sheriff’s office said there was evidence of. The FBI and Colorado Bureau of Investigation have joined the probe.

According to a sceptical chemist and owner of the state-licensed cannabis testing facility, Gobi Analytical in suburban Denver, Peter Perrone, it’s virtually impossible to find THC in water in concentrated levels because cannabinoids are not water soluble.

While it appears that this was just a scare, it is not unusual for drugs to find their way into drinking water, either when some of the medication you are taking is flushed via urination and that has not been metabolised therefore remain after wastewater treatment, or via individuals flushing unused drugs down the toilet or sink. Some of these chemicals can be harmful to both humans and animal-life.

The best method of ensuring that your drinking water is 100% pure is by investing in a mains water cooler fitted with a good carbon filter.

This post first appeared on Living-Water, please read the originial post: here
People also like
health benefits of almonds
Video Premiere: “Statesboro Blues” David Starr
Maw Maw’s Old-Fashioned Peach Cobbler
10 Health factors that you can improve with Delta 8
Unique Mode of Cancer Cell Migration Observed on Soft and Squishy Surfaces
How To Get Rid of Ticks in the Yard – 8 Steps