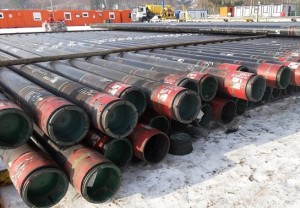 The Komi Republic of northern Russia is renowned for its many beautiful lakes, but many of them are contaminated by oil spills, from underground pipeline leaks, pumps dripping oil. These leaks and the massive ponds of black sludge are threatening fish stocks, pasture land and drinking water.

According to Sergei Donskoi, Natural Resources And Environment Minister, 1.5m tonnes of oil are spilled in Russia annually. To give you an idea of how much this is, it is more than double that released by the record-breaking Deepwater Horizon oil spill in the Gulf of Mexico in 2010.

According to the Natural Resources Ministry, 60% of pipeline infrastructure in Russia is deteriorated, and inexpensive fines and lax oversight compounds the problem because oil companies find it more profitable to pour sand on spills and patch up holes, or to even do nothing at all, than to invest in quality infrastructure and comprehensive clean-ups.

While companies are starting to replace some pipes due to the fat that the amount of oil they are losing affects their bottom line, it is far from being enough.

One of the biggest hurdles is that the economy depends on the oil companies; they are responsible for more than half the state budget every year and the locals depend on them for jobs because there is no other work.

According to a state energy statistics bureau, there were 11,709 pipeline breaks in Russia in 2014. Locals in the villages around Usinsk, a sleepy town of 39,000 people that is the regional oil hub, complain that the frequent oil spills contaminate the river fish and reindeer they depend on for food, pollute their drinking water, and cause chronic health conditions.

In Ust-Usa, a village of 1,300 on the Pechora river, there were rises in virtually every type of illness, including nervous system illnesses in both adults and children.

Without stricter enforcement, the situation is unlikely to change, and although citizens know that Russia needs the oil companies, they say that this cannot be at the detriment of nature and their health and drinking water. What they demand is not that telling oil companies leave, but that they drill in such a way so that locals can live with clean air and water.