Tonight's red wine review is this lovely Shiraz and Cabernet Sauvignon blend that is new to the LCBO and arrived on shelves across Ontario last weekend as part of the June 18 LCBO VINTAGES Release.

Launched in 2010, Killibinbin is one of a number of ranges wines produced by Brothers in Arms, a family-owned winery located in Langhorne Creek, South Australia. Although Brothers in Arms was established only in 1998, it's family history on the estate goes back to 1882 when William Formby bought the Metala Estate from an eccentric Prussian named Herman Daenke and became the first generation of the Metala story. Winegrowing entered the picture when William's second son, Arthur, took over management of the property with his brother Fred and planted his first vines on Metala in 1891 after being encouraged to do so by his brother-on-law Ronald Martin of Stonyfell fame. He planted Shiraz and Cabernet Sauvignon and some of these vines are still producing premium fruit today. In 1910, Arthur handed over all winemaking tasks to Ronald and continued to make wine on the property until 1955. The cellar of Metala was closed soon thereafter as it was simpler to transport the grapes to Stonyfell for processing.

Arthur and his wife Elsie had 2 children - Myles and Mavis. Mavis married Denys Butler and together they managed Metala until Denys died too soon in 1972. Their only daughter, Helen had married Stuart Adams and they lived at his property in Finniss. Helen became heavily involved in the management of Metala and was soon joined by Guy, the second son, upon leaving school. The property and business has since flourished and today Guy Adams and his wife Liz run Metala and Brothers in Arms. Guy and Liz and have two children and represent the 6th generation of the family to live at Metala.

This red wine is a blend of 80% Shiraz and 20% Cabernet Sauvignon. The grapes were sourced from three individual plantings at the estate of Metala Vineyards in Langhorne Creek, within the Fleurieu region of South Australia. Langhorne Creek is primarily a red wine producing region known for its Shiraz and Cabernet Sauvignon, with 70% of plantings devoted to these two varieties. Langhorne Creek is unique in that it sites on an ancient flood plain created by the Angas and Bremer rivers, with water descending from the Mount Lofty Ranges. The climate is temperate with moderate temperatures that are cooled by breezes from Lake Alexandrina and the Southern Ocean, allowing for a growing season that is long ripening.

The 2016 growing season in Langhorne Creek was notable for its long, dry periods where effectively no rain fell. It was also warmer than normal, with the warmest springs nights ever recorded, as well as record mid-season heat. According to vintage reports, Cabernet Sauvignon was a star due to the slow ripening season. With The Shadow, Killibinbin aims to take one form and turn it into something greater, something that mesmerizes with passionate purpose, hypnotic, alluring, and thrilling. Let's see how this 2016 Australian Shiraz/Cabernet is tasting tonight... 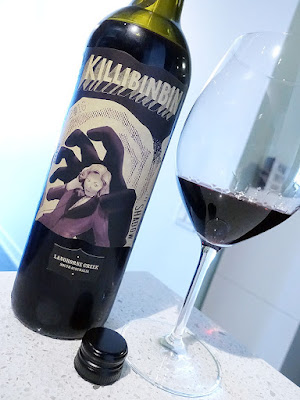 There is a Shiraz from Killibinbin available at the LCBO, while other wines from the range can be ordered through their Agent - Sylvestre Wines & Spirits.