The Philippine Government used to own the former Westin Philippine Plaza Hotel (one of the best hotels in the metropolis) until its stake and operations was disposed of to the private sector. Decades after, I've learned that the hotel's name has been changed to Sofitel Philippine Plaza Manila under a foreign management operation.

Smart Gadgets Wholesale Market !! Sma…
Cockatoo
Shiela Butch Roxas Dimaculangan: A Bo…
9 Fantastic Things to do in Valencia,…
Do you want to make remittance to the…
Early this month, I thought we were going to dine out in one of the buffet restaurants along the Manila Bay. I was surprised that the driver was being directed to where the Sofitel Philippine Plaza was located. If I had known beforehand, I could have prepared something memorable for the said dine-out!

Hotel Sofitel's predecessor Westin Philippine Plaza Hotel had a special place in my heart. That's where we had our first dine out date with my ex (hahaha!)! Besides, that's also where we held some meetings and conferences during those days where I was so much in love with "career" related matters. Seeing the staircase was like a dejavu, as if I was going down the spiral staircase with my former colleagues and business friends whom I have not seen for more than a decade. I believe the said staircase served as the Hotel's landmark, hence the name "Spiral".

But so many changes have been undertaken already after the hotel encountered a couple of typhoons and storm surges which severely damaged particularly the lower levels of the hotel, where Spiral  is situated. Based on accounts, the said restaurant has been renovated to prepare for the worst, with the end view of of providing "full service" to its customers rain or shine or storm surge.

Approaching the restaurant's entrance, we were ushered to our table with comfortable chairs and nice table cutleries. It was good that our dining table was just beside the water fountain installed below the staircase which boosted our mood and added a beautiful relaxing effect on us. 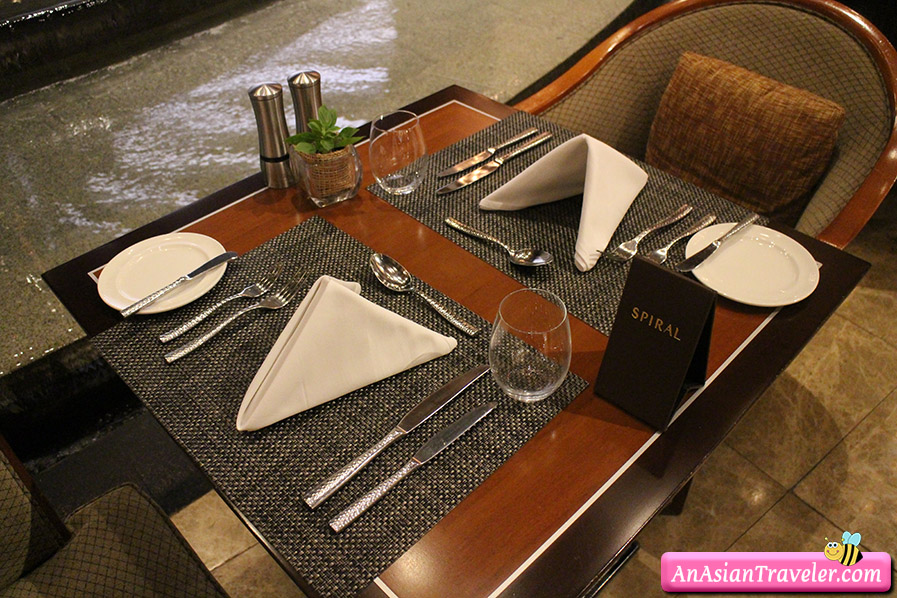 As a matter of fact, I was tempted to invite everyone to have a photo souvenir with the fountain as the backdrop. (So sorry lovely peeps, the picture didn't do justice to us!) While the lighting was not that bright enough, its softness gave us however privacy from all other guests around us. Since we arrived before the start of the buffet time, we were able to roam around the premises and noticed that the restaurant has a welcome ritual for the night. Some ladies staff brought some kind of a lamp, as if calling the attention of the hotel guests that the buffet time is about to start.

Spiral's ambiance is superb compared to some other buffet restaurants I've been to. It has an almost full-scale food menu. 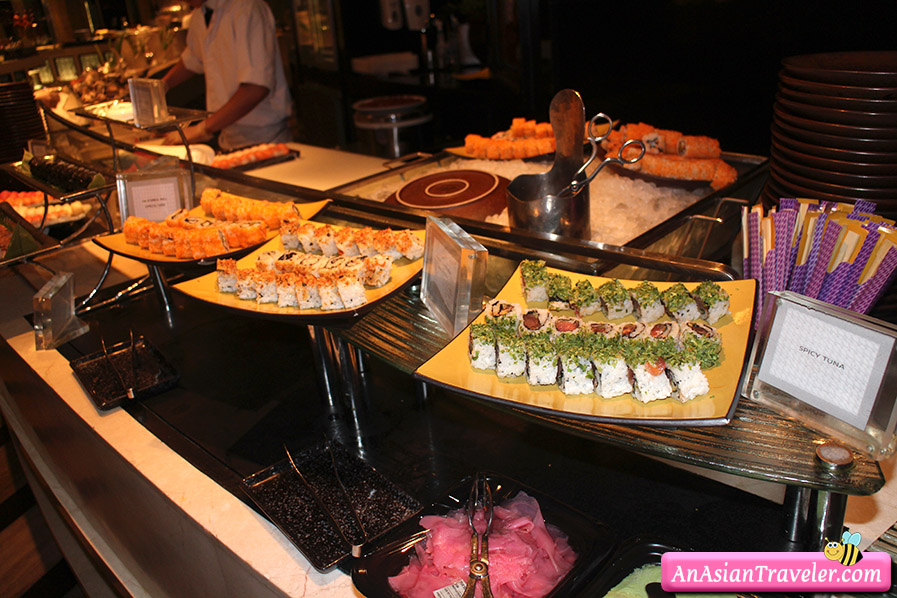 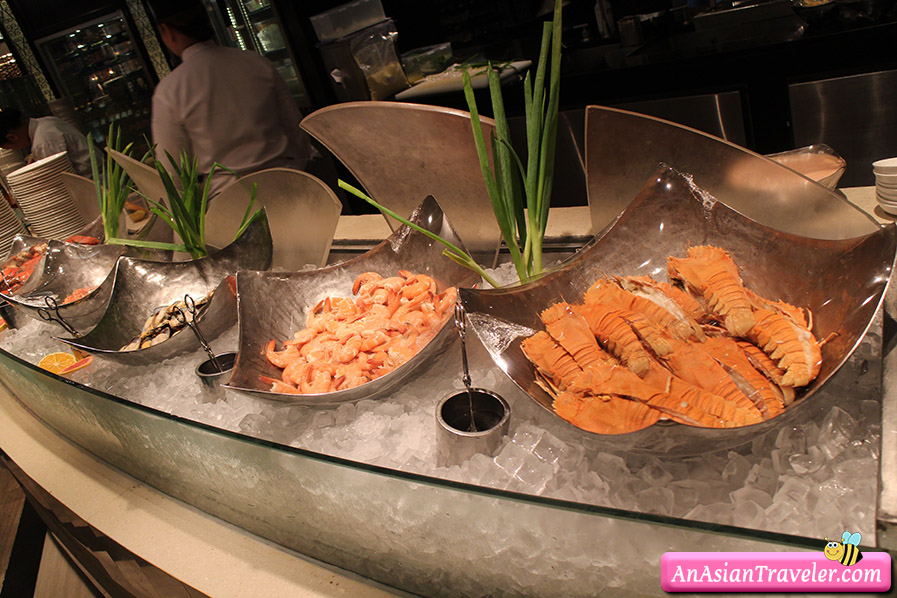 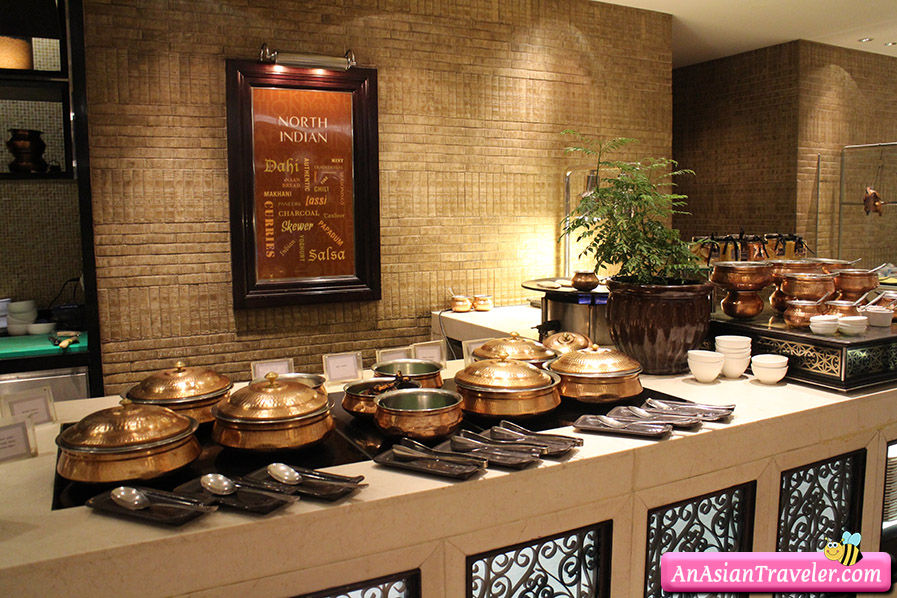 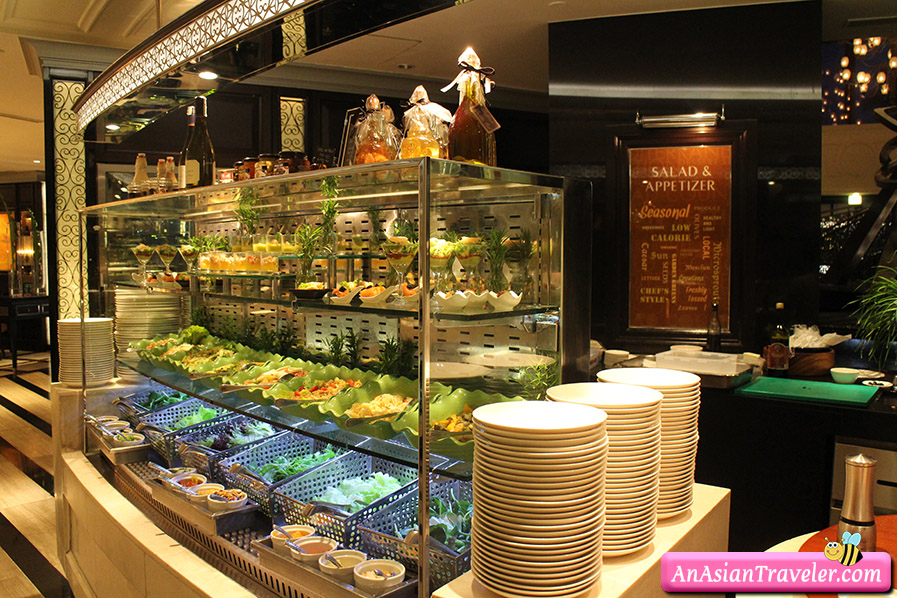 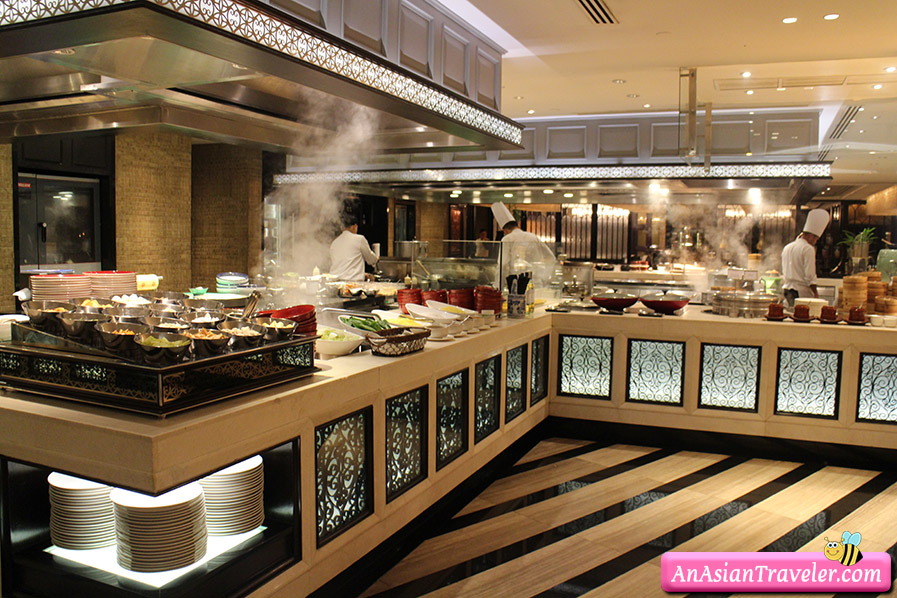 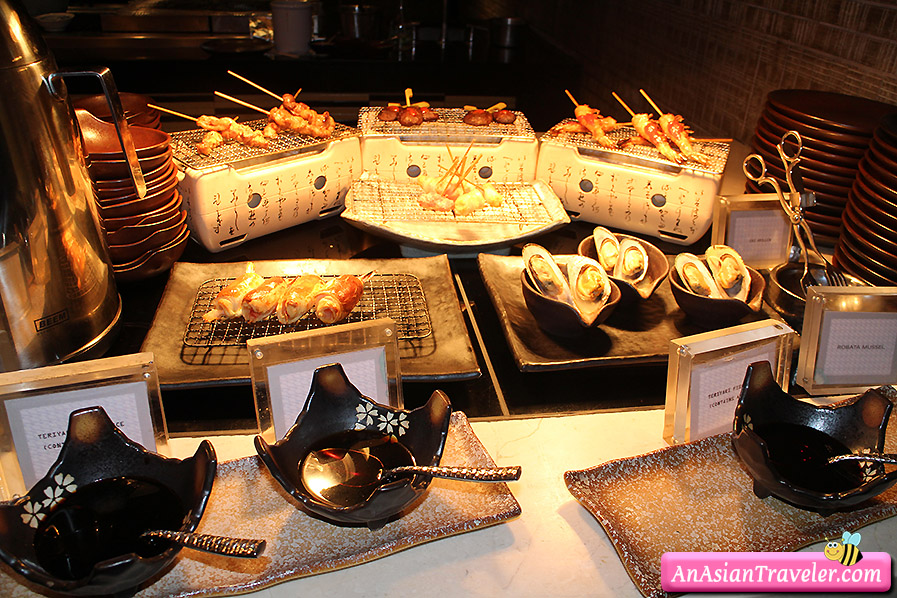 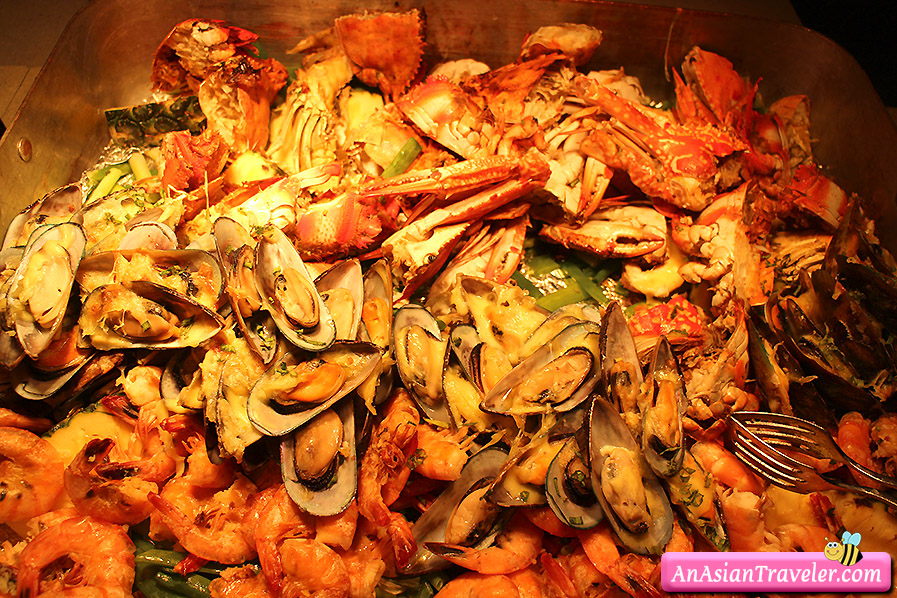 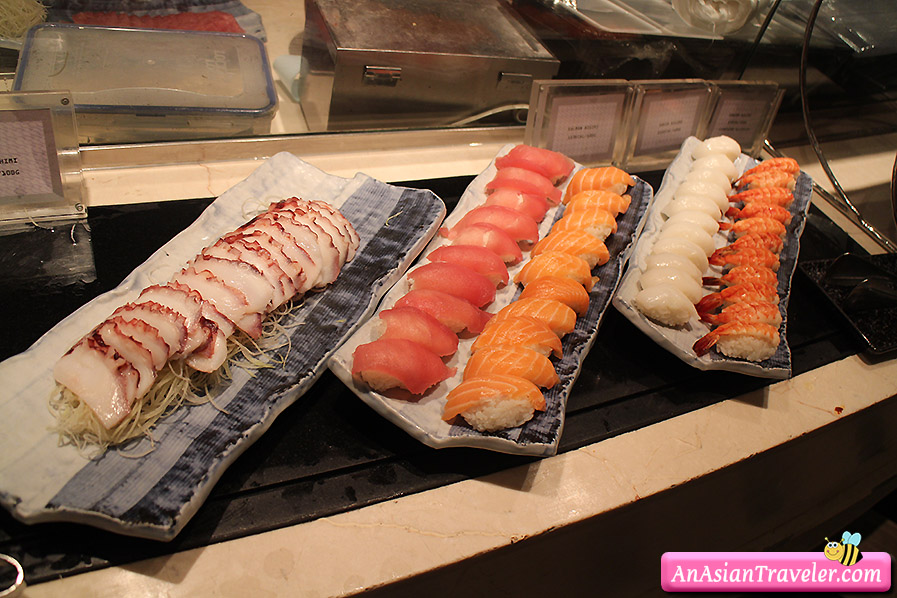 I super liked the fact that the restaurant has a Cheese and Cold Cuts Room. It looks like a huge freezer where one can just go inside and choose numerous types of cheese and various cured meats (bologna, salami, ham, etc.), capers and olives. Sad to say, I just had some small bits of it.

The bread atelier staff served us newly baked bread placed in a basket and we liked it hot that we almost consumed it. It had a hard crust outside but very soft inside and just right for the carrot soup which we had.


One of the staff served us "Foie Gras", a known luxury food made of a fattened liver of a duck or goose, and "au gratin" in a unique way. Surprisingly, a group of foreign guests even requested the staff of the foie gras station to serve them more. But gosh, I realized that I have a simple palate for this kind of French opulent cuisine. Among the four of us, it was June who enjoyed the most. Foie Gras is a french word for "fatty liver".


June's HB asked one of the staff to give him an expensive gourmet delicacy called "UNI". It's a sea urchin roe commonly known by its Japanese name. I heard June describing that it tastes like an ocean and slimy. :) It was not on the buffet spread but you can ask for it. It's free!


There are also amazing selection of desserts, from cakes, chocolates, ice creams, gelatos, candies and gummies, and native delicacies, etc. Beverages like soda and juice are not free except for unlimited coffee and tea. 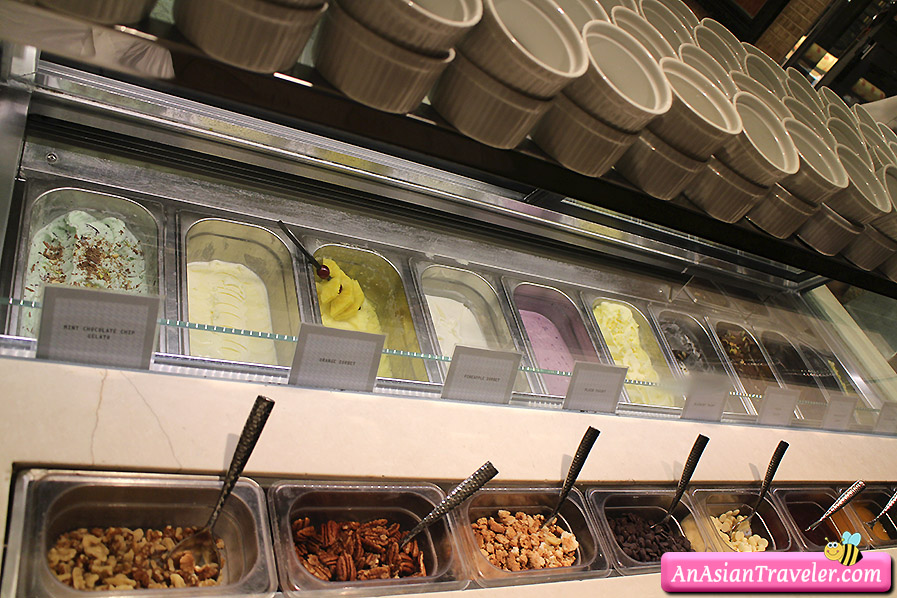 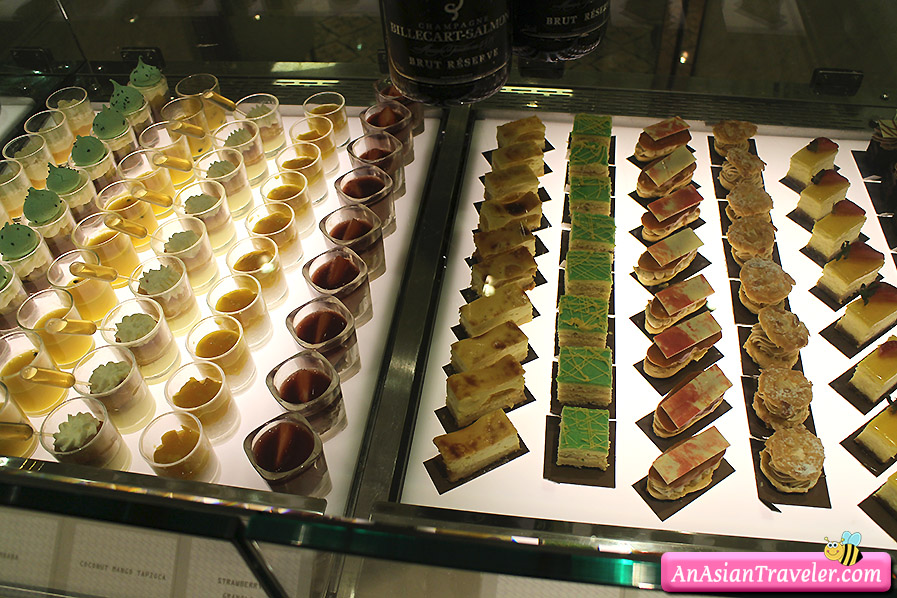 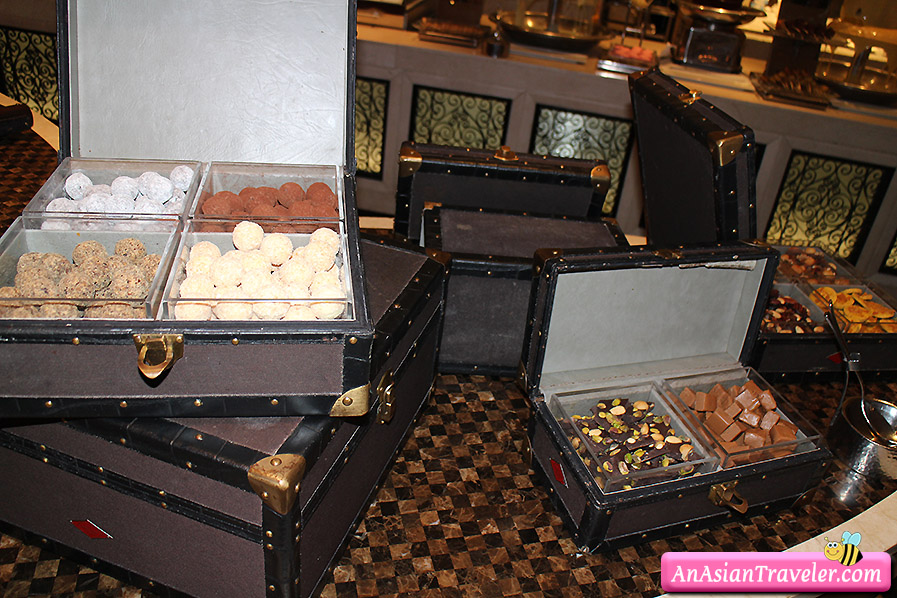 Overall, we enjoyed our meal. The music from the live band above us was an added feature. Our generous sponsor for this memorable fine dining indeed experienced a "splurge" for the evening! He spent almost P12,990 for the night (P3,247 per person). Yes, Spiral Buffet is on the upper level of Spectrum. You have to gorge on the luxury food (e.g. foie gras, uni, lobsters, premium beef, etc.) to compensate for Spiral's pricey price tag! If you want  a 50% discount you need to have an Accor Advantage Plus Card.

Spiral 2 Go also offers some homemade cakes and pralines, jams, tableya, macaroons, cookies, etc. where you can take it home for a few pesos. 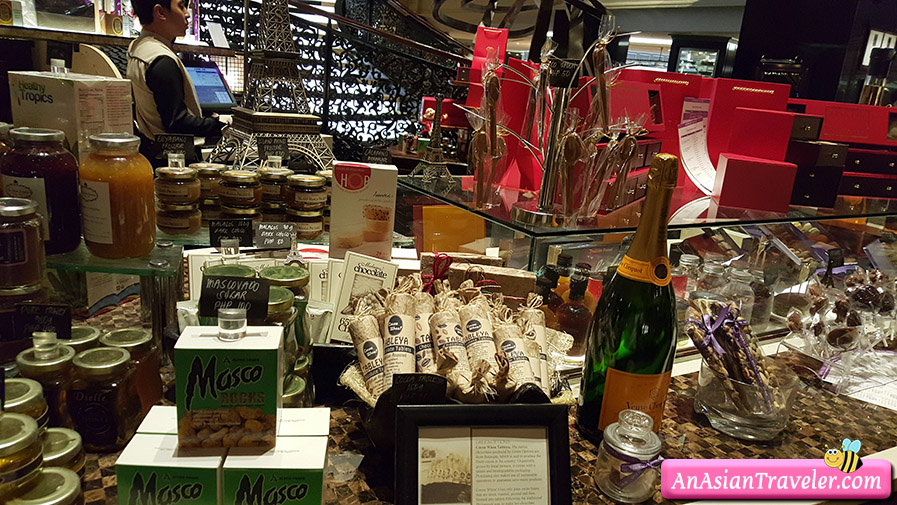 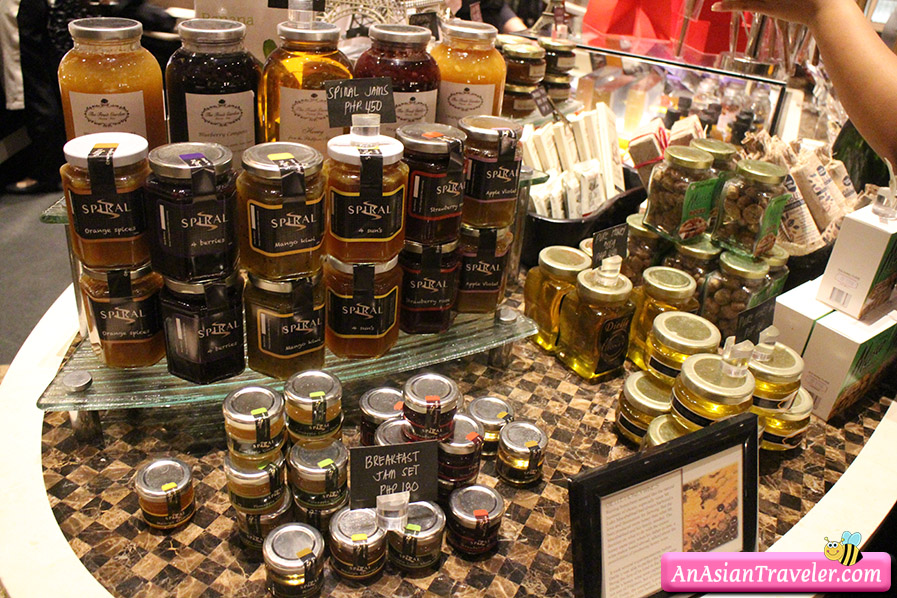 
This post first appeared on An Asian Traveler, please read the originial post: here
People also like
Smart Gadgets Wholesale Market !! Smart watch !! Android box !! Smart lamp !! Smart Spicker !! etc
Cockatoo
Shiela Butch Roxas Dimaculangan: A Born Achiever
9 Fantastic Things to do in Valencia, the City that will Blow your Mind Away
Do you want to make remittance to the Philippines?
Hunting the Hunters
Luxurious living experience with Sikka Kimaantra Greens Greater Noida West
21 Most Instagrammable Places In Peru {Top Peru Hidden Gems}
A Wonderful Winter Ahead At One Snowmass by Katie Shapiro