As this was my first trip to Tasmania, I didn’t want to cram too many items onto my itinerary. Wherever I go to a new place, I would prefer to just suss things out and see if I would come back again. Tasmania certainly didn’t disappoint and I look forward to visiting it again someday.

Beard Bib – Solution For Messy Groomi…
Casey Veggies On New Endeavors, His S…
Look to the Bible as our guide in the…
Save 61% on Face Slimming Bandage
Hectic Boyz – Badlands

We spent 8 days in Tasmania and this was our itinerary: 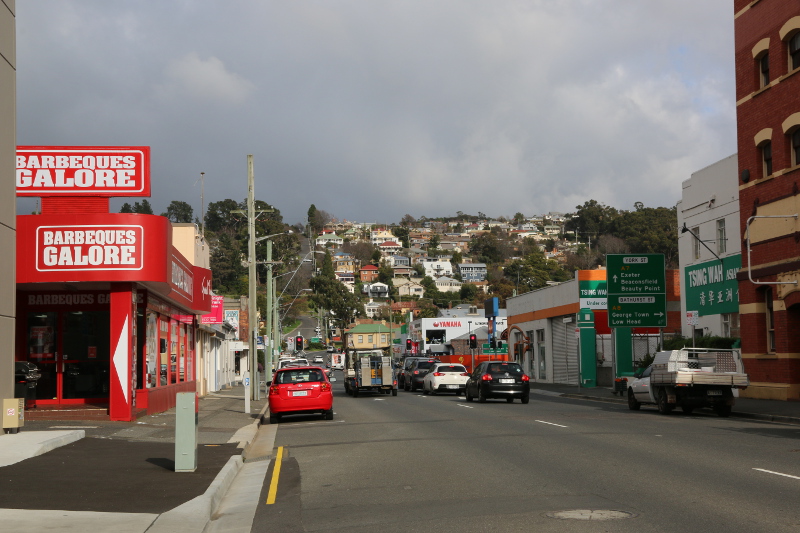 Launceston is really quite hilly!

We landed in Launceston late in the afternoon. The 20-minute journey from the airport to the hotel took us through an undulating highway. Being unaccustomed with the roads here, I had to drive slightly below the speed limit.

After checking in to our hotel, we went to the Black Cow Bistro for dinner. The word “bistro” in the restaurant’s name certainly threw me off course. It was fine dining! They should have spelled it “bi$$$tro”. Anyway, all is well, I had enough cash with me and so I didn’t have to help them do the dishes after that.

We decided that since we are going to stay the next day at Moina, which is a really, really, small place; we were going to stock up on some groceries at local supermarket. We found Woolsworth, which was a fairly large supermarket just 10 minutes’ walk from our hotel. 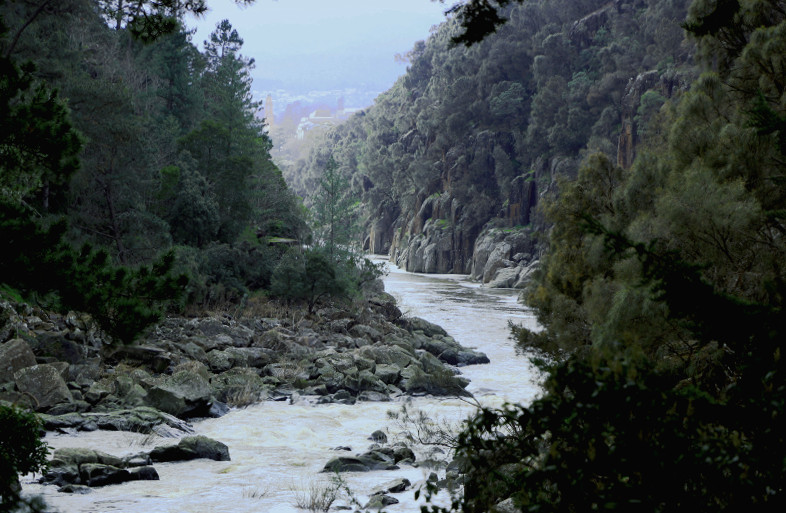 Cataract Gorge, Launceston – with the town clock in the background

After a restful night (we were deadbeat from the preceding day’s journey from Singapore), we set off on our journey. Launceston is quite interesting in way that there are no towering skyscrapers. Instead, Launceston seems to take pride in preserving the 19th century colonial buildings that defines the cityscape. It is a refreshing change for me to be able to see so much of the sky in a city.

Before leaving Launceston, we decided to check out Cataract Gorge Reserve, which is just 1.5km from the city. Flanked by dolerite columns that forms the rocky cliff faces of the gorge, the South Esk river cuts through Cataract Gorge and eventually becomes the Tamar River. It was only after we left, that we read about the interesting geological significance of the area. Apparently the gorge was formed after a major earthquake 80 million years ago (certainly makes me feel young!). I feel that more information should be provided on that area so that it wouldn’t become just another park, which was how I felt at that time. It appears that the chairlift here has the longest chairlift span in the world. Unfortunately, pressed for time, we did not go on it. 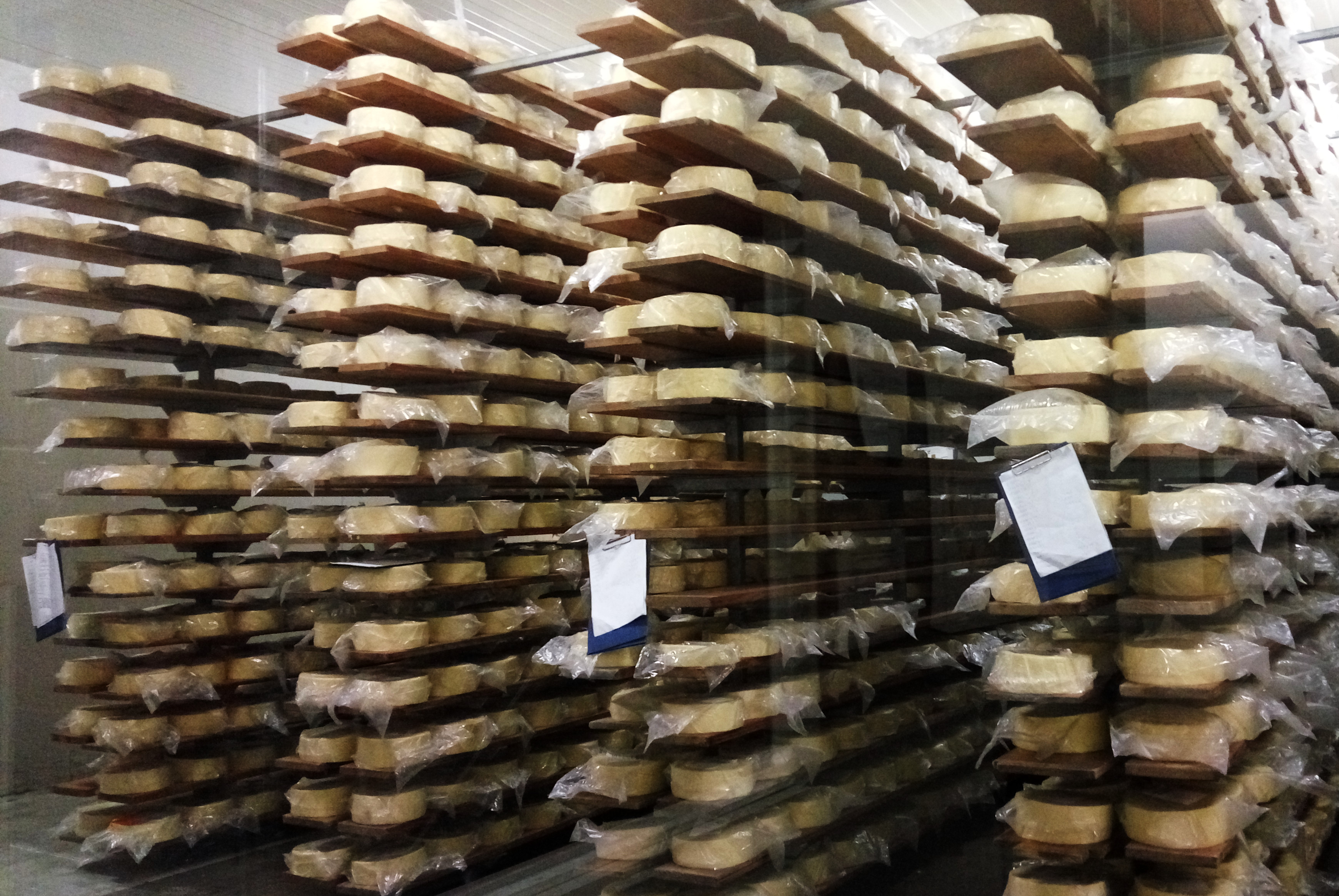 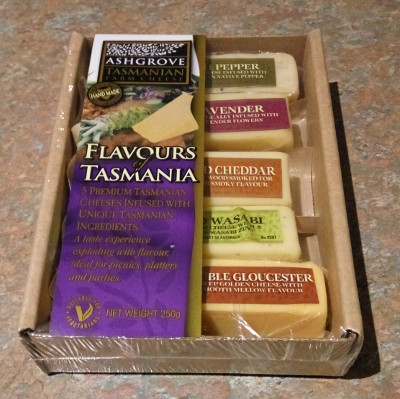 Leaving Launceston, we drove for about 45 minutes before stopping at Ashgrove Farm Cheese, on the Bass Highway. There were cheeses of every kind: sharp ones, mild ones, spicy ones; but the kicker were the wasabi-flavoured ones. I just had to get the sampler which comes as a box of 5 different cheeses. The packaging looks deceptively small, but we struggled to finish them all during the week we were in Tasmania. For just A$9.50, it was well-worth the money. And if you are feeling peckish, there is also a deli within the shop. During the week from Monday through Friday, you can view cheese making between 9am and 4pm.

Driving on, we travelled north along the highway for about 20 minutes and made a brief stop at House of Anvers. It has a chocolate factory, a small museum and  a cafe on the grounds. The shop to the left of the main building allows you to sample their products and buy them if you like. I particularly enjoyed their Ganache Truffles.

As it was mid afternoon, we decided to press on without further delay and skipped the rest of the sights we had originally intended to visit. Turning southwest from the House of Anvers, we travelled for about an hour along the B13 and then the C136 toward Cradle Forest Inn, where we will be spending the next 2 nights. It was about 4pm when we arrived at the motel. With the image of enjoying Devonshire tea (wood-fired scones, no less) by the log fire in mind, we hurried back to the lounge right after checking in to our suite. What a perfect way to round up our afternoon!

We asked the hotel’s manager if we could see any Tasmanian devils, but they told us it would be difficult as these creatures are very wary and shy. But she said to walk the grounds at around 7.30pm as there will be plenty of wallabies around. True enough, when we came out after dusk, there were a few of them out looking for food. But they hopped away quickly when they sensed our presence.

We left after breakfast for Cradle Mountain National Park, which was just 22 minutes away. Details of our trip there can be found in my earlier post “Tasmania: Dove Lake Circuit, Cradle Mountain“. We spent a few hours here, including the hike around the lake and for some photography. The rest of the day was just free and easy and we returned to our accommodation to simply  relax.

We set off after brekkie for Coles Bay as we wanted to visit the Freycinet Peninsula. The journey was quite a pleasant one: there were hardly any cars on this route. The distance was about 270km and we took a leisurely 3.5 hours to reach our destination. Apart from a pitstop for our packed-lunch, we didn’t stop much for sights along the way. The only time we stopped for some photo opportunities was at the Devil’s Corner, a vineyard with an on-site cafe and cellar door. Their newly-built lookout offers sweeping views of the Hazards and the Freycinet Peninsula.

Driving on, we finally arrived at our accommodation at Coles Bay. We checked in to Hazards Escape, an airbnb holiday unit, and set off immediately for the climb to the Wineglass Bay Lookout. 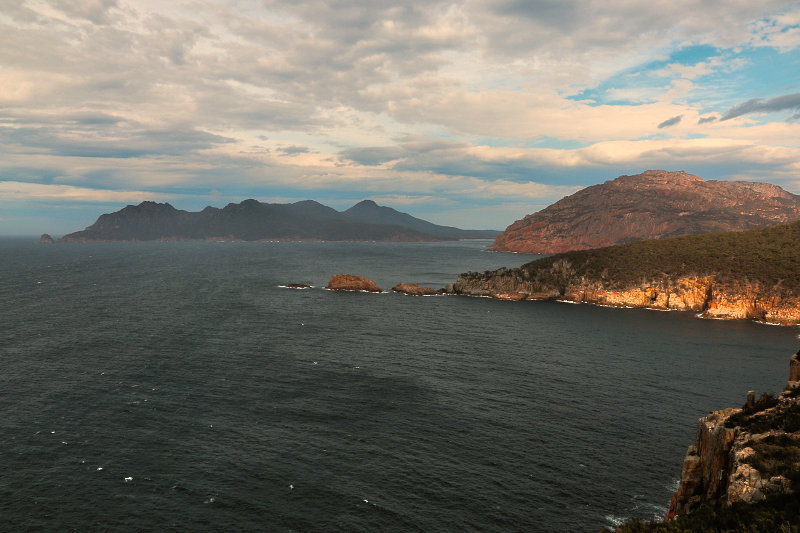 Views of coastline of Freycinet National Park from Cape Tourville

As the journey will be relatively short, we went back to the Freycinet Peninsula and made a brief stop at Cape Tourville. The short walk at Cape Tourville offers wheelchair access and is suitable for people of all ages. There was also a lighthouse just above the lookout. Visitors to Cape Tourville are rewarded with magnificent coastal views over the Freycinet Peninsula and even offers a partial view of Wineglass Bay – ideal for those who don’t want to make the climb up to the Wineglass Bay Lookout.

Leaving Cape Tourville, we made a brief at the Freycinet Marine Farm for oysters. This is a must-stop when you are in this area! 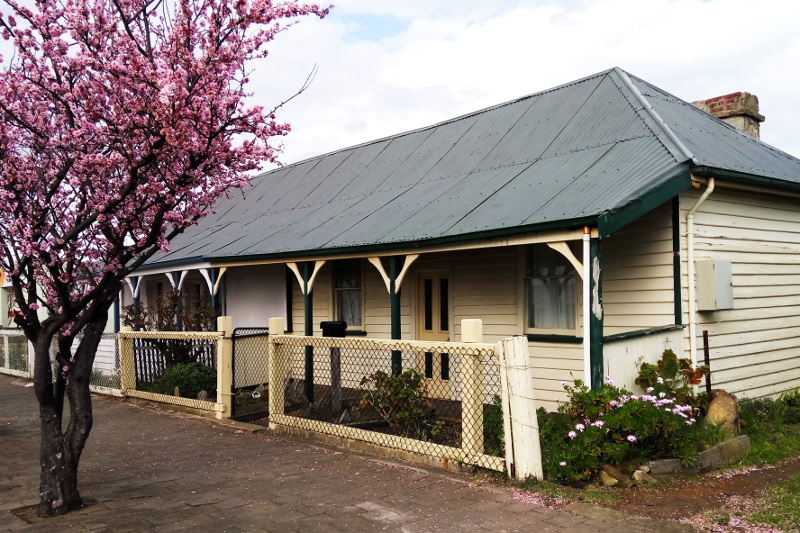 Lining Vicary Street in Triabunna are some of Australia’s oldest buildings.

We travelled along the Tasman Highway (A3) and arrived at Triabunna for a fuel and lunch stop. Triabunna is the gateway to the beautiful Maria Island National Park. Unfortunately for us, we are unable to include Maria on our itinerary for this trip. May be next time! 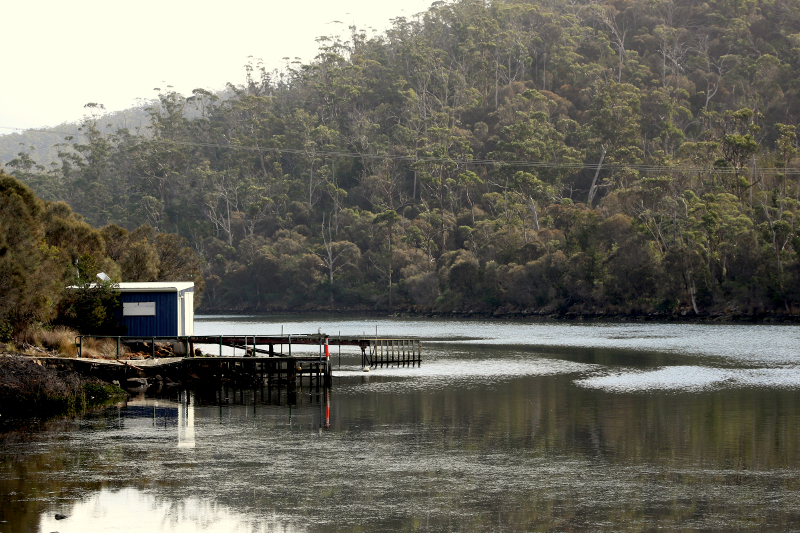 Orford – On the east coast of Tasmania

We drove on along the A3 to make a detour to Richmond, on the recommendation our airbnb host. Richmond, as it turns out, is a quaint little town, with lots of Georgian-era buildings. Most famous among them, would be Richmond bridge. Built between 1823 and 1825, it is the oldest bridge in Australia that is still in use. I had to make an obligatory tourist-stop here, on the eastern bank of the Coal River, over which the bridge straddles. The buildings on the main street of Richmond have been mostly converted as shops and cafes. I would imagine Richmond to  get rather busy on weekends due to its proximity to Hobart, which is just 20 minutes away. 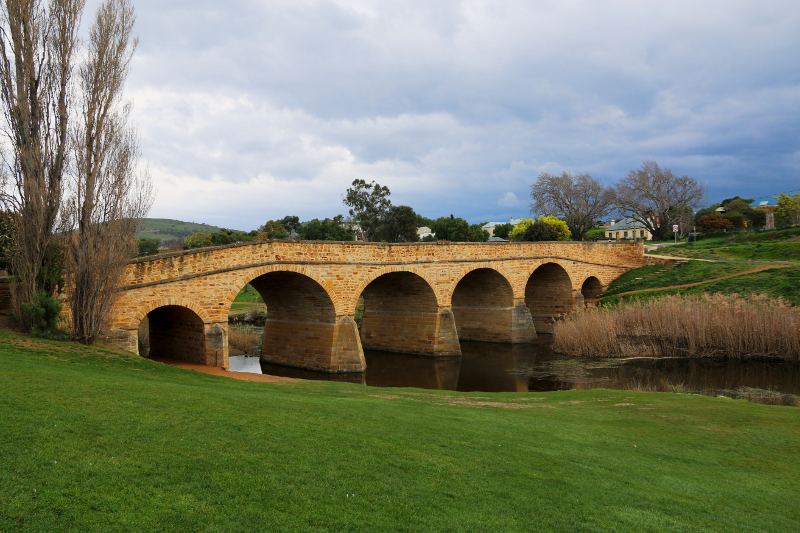 We  continued on with the final leg of our journey to Hobart. We decided to take the slightly shorter, more scenic, but winding Grasstree Hill Road towards our destination. We finally arrived at our accommodation a little after 4pm.

Being the tourists that we are, no sooner had we dropped off our luggage, we were once again on the road. This time it was for grocery shopping and also for dinner. Dinner was just a short 15 minutes drive into the city at Fish Frenzy.

One of the main reasons why we were in a hurry to arrive at Hobart on a Friday evening, was to be able to visit Salamanca Market the next day. We spent a few hours here browsing and shopping and also had lunch here.

We walked a bit by the waterfront around Salamanca, and decided to drive up to Kunanyi/Mt Wellington.

We have some friends here in Hobart and decided to pay them a visit. The rest of the day was just spent chilling.

This is our final day in Tasmania and we were sad that our vacation in Tasmania has come to an end so quickly. As our flight to New Zealand (yes…our vacation was not over yet!!) was not due till later in the afternoon, we hoped to make the most of it. We did have a leisurely morning but decided not to overstay our welcome (even though our airbnb host said it was alright to check out late). We decided to pay a visit to the Royal Tasmanian Botanical Gardens. Being winter, there were not many flowers. Still, it was quite a pleasant visit. 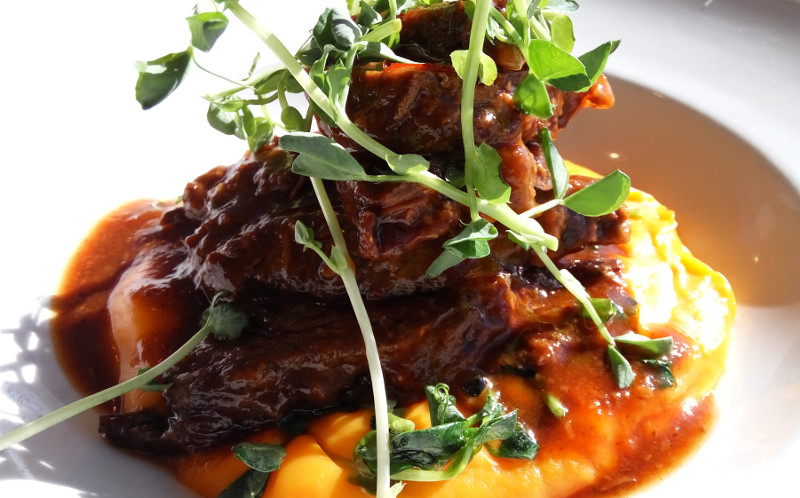 We wanted to have a last go at Tasmanian oysters. Having received some positive feedback about the Barilla Bay Oysters Restaurant, and noting that it was very near the airport, it was just perfect! We had the Chilli Beef Cheek and the seafood chowder, both of which we felt were excellent. I must add that the beef cheek was extremely tender.

We decided to try their take-away oysters too. It was just A$12.95 for a dozen but they are definitely smaller in size compared to those they offered in their restaurant menu. Fair enough, you get what you pay for. Still, I can’t fault the freshness of their oysters. All in, they are value for money. Barilla Oysters Restaurant is open for lunch between Thursday and Monday 12 noon to 3pm, and dinner only on Friday and Saturday between 5.30pm and 8pm. The restaurant is closed on Tuesday and Wednesday. They are located at: 1388 Tasman Highway, Cambridge TAS 7170.

And that’s it for my Tasmanian leg of my month-long vacation. See you in NZ!

This post first appeared on MyBigRoadTrip.com, please read the originial post: here
People also like
Beard Bib – Solution For Messy Grooming
Casey Veggies On New Endeavors, His Start With Odd Future, & Beef With Former Business Partner
Look to the Bible as our guide in the future
Save 61% on Face Slimming Bandage
Hectic Boyz – Badlands