My next attempt at scaling new heights came in the form of the Wineglass Bay Lookout. Before that, we checked in to Hazards Escape, our accommodation at Coles Bay. Enroute, we paid a brief visit to the shops (we needed groceries for the night) located by the jetty.

Just a note here: shops here close early, especially during winter, so please do your shopping before 5pm. At the recommendation of our airbnb host, we went to Coles Bay Convenience Store, located at the end of Garent Avenue. While not a big store, they have almost everything that you need. Wines, though, were particularly expensive. So we passed up on it.

Just a short distance away, is Coles Bay, and here is where you can see the Hazards. The Hazards is a mountain range named after Captain Richard Hazard. Being late winter, late in the afternoon, and together with the orange lichen-covered rocks, a very warm and beautiful scene presented itself. We wished we could spend more time here, but we were rushing to get to the Wineglass Bay Lookout before sunset. 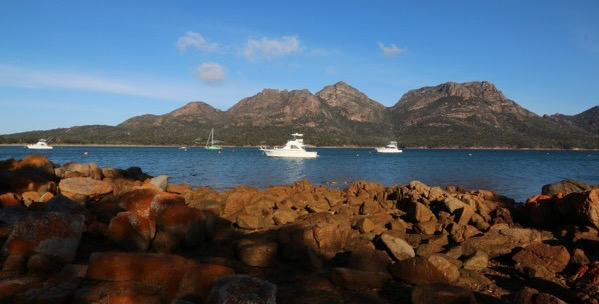 Coles Bay with the Hazards in the background

I was initially worried that climbing up to the Wineglass Bay Lookout would be too difficult. After all, the vertical elevation is about 210m. But the carpark was already at 49m above sea level, so that leaves 161m for me to scale. Bukit Timah Hill is 164m, and I have never attempted that before in my life. Now, 161m will be roughly equivalent to the height of an 80-storey HDB apartment block, not that there is one yet. Can I do it? I’m not that fit. I confess that I am the kind that can only do 400m of jogging at a stetch and had to pause for a breather.

Besides, I had to lug my camera and tripod along as I wanted to do some timelapse photography. Can I do it?

Steps along the track

Surprisingly, perhaps it was part adrenaline, part curiosity and a desire to challenge myself, I had little trouble getting to the top. While it was steep at some stretches, and I was somewhat tired initially, I made it up to the lookout in half an hour, which is the average time taken by most people. Yea! I am normal. My wife did well too. 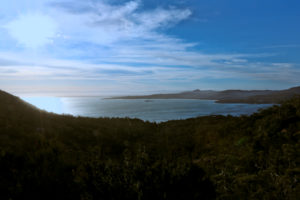 Along the way, we stopped briefly at the Coles Bay lookout. The view would have been better had it been in the morning, as the sun would have been behind us. Still, it was a beautiful sight. So, was it worth the effort? Certainly! From the lookout, we had a clear view of Wineglass Bay. It was almost sunset when we got here and the scene before us was bathed in the warm glow of the setting sun.

We stayed till it was almost dark before making our way down. The way down was by a different track, one that is parallel to the one we took when we climbed up. Oddly, perhaps it was really a longer route, we took more time coming down.

Would I recommend it? Most certainly! Would I do it again? Only in cooler seasons. Otherwise the climb would have been a lot harder for me in summer. My advice: take your time, and take a moment to enjoy the view from the lookout. And if you have the time for it, make your way down to Wineglass Bay too!