Top Five Things to do in Porto Alegre

I've been in Porto Alegre for several months now and while I still miss home from time to time, there are parts of this city that I've truly learned to love and appreciate. I also think I'm now in a position to be able to make recommendations to new arrivals or tourists who visit the largest city in Brazil's south.
So here it is, the top five things to do in Porto Alegre (In no particular order)
Eat Churrasco
A lot of people have heard about how good churrasco (Brazilian barbecue) is. Giant slabs of meet skewered on to long metal sticks and grilled over an open flame. I'm getting hungry just thinking about it. 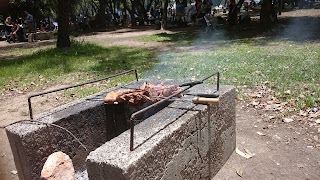 Churrasco in the park
What could be better? While Brazilian barbecue may be world famous, here in Brazil it's Gaúchos that are known for serving up the best Churrasco, so if you're in Porto Alegre you know you're in for a treat.
And it gets better. Most of the churrascaria's here in Porto Alegre are a flat price, with waiters constantly bringing around an assortment of Steak, sausages, ribs, pork, lamb, or virtually anything else that can be grilled over a flame. For fans of meat this is something close to heaven – sorry vegetarians. The only real challenge is pacing yourself so that you can get a taste of everything on offer. 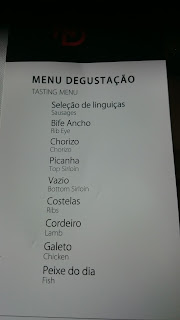 List of available meat at a Churrascaria
Gaúchos are fiercely proud of their well earned reputation of serving some of the best meat in the world. If you're lucky enough to know some locals, or meet some while you're here (any Brazilians reading this using google translate will be confused by that sentence) they'll almost certainly invite you to eat churrasco. They may invite you to their favourite Churrascaia or more likely, cook one up themselves. Many homes and apartment buildings here have brilliant churrasco set ups built in, while many of the parks around the city have places available to be able to cook up your meat in the great outdoors.
As an Australian, barbecues are one of my favourite things in the world, and to be completely honest, Gaúchos seem to have the art form perfected.
Take a Walking Tour
One of the best ways to get to know any city is just by going for a walk. These days, free walking tours have sprung up in cities all over the world offering a good starting point when getting to know your new surroundings. Porto Alegre has joined in with Free Walk POA, who take visitors around the historic downtown part of the city for 2 hours every Saturday. Meeting at the historic Public Market, the guides not only show some of the most interesting buildings and locations of the city, but also provide some great context with stories and anecdotes about the history of the buildings and the city itself. 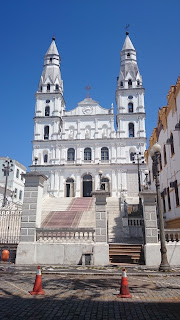 Igreja Nossa Senhora das Dores - one of the stops on the walking tour
The guides (of which there are plenty) are very enthusiastic about the history of the city and are keen to pass on this enthusiasm to people who most likely had never even thought about Porto Alegre as a tourist destination.
Tours are offered in both Portuguese and English, and the split between the two groups when I attended this week (a couple of dozen in the Portuguese group and just 4 in the English group) shows most foreign tourists still don't look past Rio and other beach side cities as destinations within Brazil.
Drink Chimarrão
After Churrasco there's nothing that the typical Gaúcho likes more than sharing chimarrão with their family and friends.
Chimarrão is a hot drink made of tea like erva-mateleaves and is typically shared between a group of people. 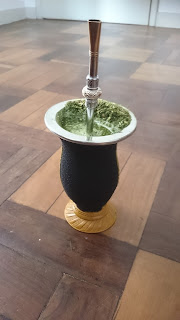 A Gaúcho's favourite drink, Chimarrão
It is made by putting the leaves into a special cup called a cuia and filling with hot water. A special metal straw, known as a bomba filters out the leaves as you suck up the mate infused water.
While out and about in Porto Alegre on a weekend you'll see groups of friends or families walking or sitting around with their chimarrão, passing it from person to person. Typically, each person will drink all of the water out of the cup, refill it with more hot water and then pass it on to the next person who will do the same. The process goes on and on until the thermos/flask full of hot water runs out, or the flavour starts to go.
Drinking chimarrão is very common in other parts of South America (where it is known as mate or yerba mate) but fairly unique to Gaúchos within Brazil, another thing that sets them apart from the rest of the country. 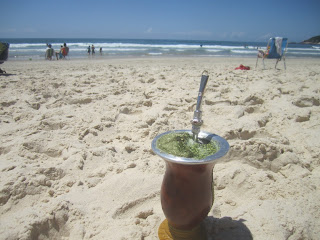 Gaúchos take their Chimarrão everywhere
A lot of countries have a strong history with caffeinated beverages. In Australia many of us need our morning flat white, while for many Brits tea is almost worth its weight in gold. The USA even used tea taxes as a symbol of oppression.
It's the social aspect of drinking chimarrão that sets it apart though. When seeing Gaúcho drinking chimarrão you'll see their cuia's decorated in many different ways. Some have traditional decorations, some with cultural symbols, while others will have logos of their favourite football team – it is Brazil after all.
Go to a Park
While Porto Alegre isn't blessed with beaches like other parts of Brazil, it does have a lot of great parks and other outdoor areas which the locals swarm to on weekends.
Farroupilha Park, known better to Gaúchos as Parque da Redenção is buzzing with life pretty much every day, but even more on weekends when it hosts an organic food market on Saturdays and a craft market on Sundays. The park also regularly hosts protests, festivals, buskers and concerts meaning there's pretty much always something going on there. The park is located close to the popular bohemian neighbourhood of Cidade Baixa and has some of the best cafe's and bars in town just walking distance away, meaning it stays as one of the more popular parks in town. 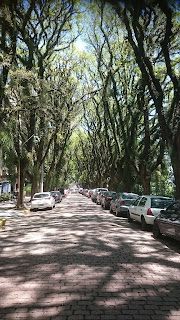 Porto Alegre has some beautiful parks as well as some nice tree lined streets
A smaller and quieter park is in Moinhos de Vento known as Parcão(big park) and is a good place to relax, read a book and drink chimarrão. Other parks, like Parque da Harmonia, don't have the same natural beauty of places like Parcão or Redenção, but have facilities like barbecue pits and covered areas which make them the perfect place for a part or a big group gathering.
The area around Usina do Gasometro (an old power station) is also hugely popular among the locals as a place to walk, drink chimarrão and listen to music. On weekends, the roads around the area, running along the Guíaba lake (called a river, or rioby the locals) are closed so people can enjoy the waterside areas for walking, skating and riding bikes.
Looking west over the river (er, lake, or...whatever) it is also the best place in town to watch the sunset.
Go to a football game
While there are some things that set the state of Rio Grande do Sul apart from the rest of Brazil, one thing that unites them is football.
Many people are familiar with Brazilian football teams based out of Rio de Janeiro and São Paulo, like Flamingo, Botafogo or Corinthians but wouldn't know any from Porto Alegre.

Fans of Grêmio at Arena do Grêmio
Porto Alegre's top tier teams SC Internacional and Grêmio FBPA, however, are currently both in the top half dozen teams in the country. Support for each team is divided between the population of the city and fans are fiercely passionate about their chosen club, with having family that have supported their given club for generations.
As I wrote about last week, Internacional's stadium, Beira-Rio, received a major upgrade prior to the 2014 FIFA World Cup and as such their home ground is know truly world class. Based walking distance from the inner city, the stadium is a destination of its own, and on game days hosts parties outside heavily featuring Inter's famous red.

Inter fans at Beira-Rio
Not to be out done, Grêmio play out of the brand new Arena do Grêmio, completed in 2012. Based in the north of the city, the stadium is surrounded by bars and small churrascarias all featuring the black, white and blue “tri-colours”of Grêmio.
While both stadiums are world class, there is one thing they lack which is out of their hands – beer. Brazil has laws meaning beer cannot be sold at football games. It's not a huge issue though, as around both stadiums are merchants selling cold beers along with food options meaning its a good idea to turn up early and soak up the atmosphere.
Even if you're not a football fan yourself, the passion that runs through the vains of both sets of fans is infections. Through cheering, singing and chanting the entire 90 minutes of the game, football games can feel more like a festival than a sporting event. Though at the end of the day, if the home team wins the party will be better.
Both teams play in the top division of the national league (Campeonato Brasileiro) as well as the Rio Grande do Sul state league (Campeonato Gaúcho) as well as various cup games, meaning no matter what time of year you visit, there is a good chance of being able to go watch some football.

Netflix’s The Playbook Review: Storie…
Discover the Best Things to do in Por…
‘No one likes being a tourist’: the r…
Sailing Yachts vs Motor Yachts : Whic…
Pochette à pompon en coton - imprimé …

Top Five Things to do in Porto Alegre