Porto Alegre - A Buffet of Buffets

Tags: meat buffets restaurant
June 15th 2016
View original
I wrote recently about how Porto Alegre lacks a little when it comes to variety of cuisine offered in its restaurants. But while variety may be a problem, quantity certainly isn't. It seems as if every Restaurant in Porto Alegre is some kind of buffet.
Every day at lunch time office workers pile into restaurants all over the city that offer Buffets, which are either all you can eat (buffet livre) or by the kilo (buffet a quilo / grama). A lot of places offer both, with small amounts being weighed and then if you go over the maximum, it simply becomes an all you can eat situation.
Now, for a foreigner like me, all you can eat is often seen as a challenge. We don't have many of these kinds of restaurants back home and when you do get a chance to go to one, you usually want to make sure you maximise the value by eating as much as possible. The thought “if I eat a lot now, I won't need dinner” controls your actions as you stuff your face.
It is different here though. Gaúchos do this every day and just eat what they need. Weird.
Many buffets have a lot of options. Salads, vegetables, fruits, pastas and Meat. Of course, Gaúchos still load up half of their plates with rice and beans, but there's always a lot of different meat options meaning they can generally get some variety. Some of the very good buffets will have someone offering meat straight off the grill, which is generally where you'll find me. While most buffets offer more or less the same food there are some that offer speciality menus including vegetarian or sushi dishes.
It isn't just the buffets where you can get “all you can eat” though, as many other restaurants operate on a similar model. My favourite of which being churrascarias. 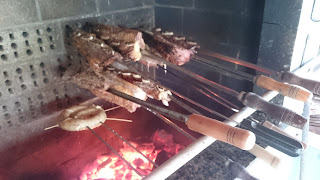 Is there anything better than grilled meat?
Many churrascarias operate as a kind of buffet as well, with one price covering the consumption of as much of the grilled meat as you want. Strangely, you generally have to pay extra for sides of breads or salad, meaning that if you're like me, you'll stick to the carnivore option. I've found it very difficult to control myself any time I've gone to a churrascaria. The waiters are constantly coming to the table with a never ending supply of tasty steak, sausage, ribs, lamb and other meats and it is difficult to say no. My only advice is to pace yourself. Some of these restaurants will have a huge variety of meats available on any given day, and if you're like me you want to try as many as possible – so take only small amounts of each one. You will not go hungry.
Like churrascarias, galetarias have loads of waiters bringing you seemingly endless loads of food – all covered under one price. While a churrascaria focuses on grilled meats, a galetaria can best be described as an Italian chicken restaurant. Starting with things like bread, cheese, salami and olives, the servers will start bringing out different kinds of pasta along with chicken cooked in virtually any style you can think of. 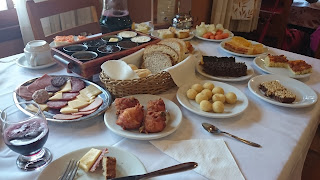 A Cafe colonial in Gramado
Another option with seemingly endless food is a café colonial which are common in country areas of Rio Grande do Sul and other southern parts of Brazil. My first experience with a café colonial came when my wife and I took a day trip to Gramado. After a longish drive I was ready for some lunch and when my wife said we would go to a café for some food I wasn't terribly impressed – I wanted a full meal, not just some coffee and snacks. After seeing what was served up, I admit that I had no reason to be worried. For just two of us the table was literally covered in cakes, pastries, chicken, coffee, ham, bread and many other things. While it wasn't strictly “all you can eat”, the food laid out was far more than my wife or I could eat and certainly cured my hunger.
If all of those buffet options still isn't enough for you, there are even ice cream buffets. You get a bowl and a scoop and get to add as much of any flavour of ice cream (as well as candy and toppings) as you want and simply pay by weight (the bowl, not you) at the end.
So while variety may not be Porto Alegre's strongest point when it comes to food – quantity certainly is, and if you know where to go there is plenty of quality available too.
I'm still working hard to control myself at these places, but at least my family knows I wont go hungry!

Porto Alegre - A Buffet of Buffets