Tags: porto alegre australia cahill
June 20th 2016
View original
I wrote this piece exactly two years ago as part of my 12 month Long Road To Rio trip as I travelled all throughout Latin America on my way to the 2014 FIFA World Cup.

I think it is interesting to see my first impressions of Porto Alegre in this article are that it was cold (like it is now!) and that with it's cool bars and nightlife it felt more like home than any other place I'd been to in Latin America. I clearly had a feeling about this place!

You'll see that I didn't mention anything about meeting the woman who is now my wife (and the reason I came back to Porto Alegre) - but give me a break I was playing it cool!


If you ask any Brazilian their thoughts on the southern city of Porto Alegre and they'll generally all say the same thing: it's cold. While they'll tell you the city is nice, the people aren't as friendly as those in the rest of the country, especially the north. The only thing colder than the people they'll insist, is the weather.

Arriving in the city a couple of days ahead of the Socceroos clash against Holland, it was clear they were right about one thing - the weather is certainly much colder than our previous host city of Cuiaba. While the temperatures may be cold, the people are anything but, with thousands joining in street parties and the procession to the stadium on game day along with the hordes of travelling Aussie and Dutch supporters. 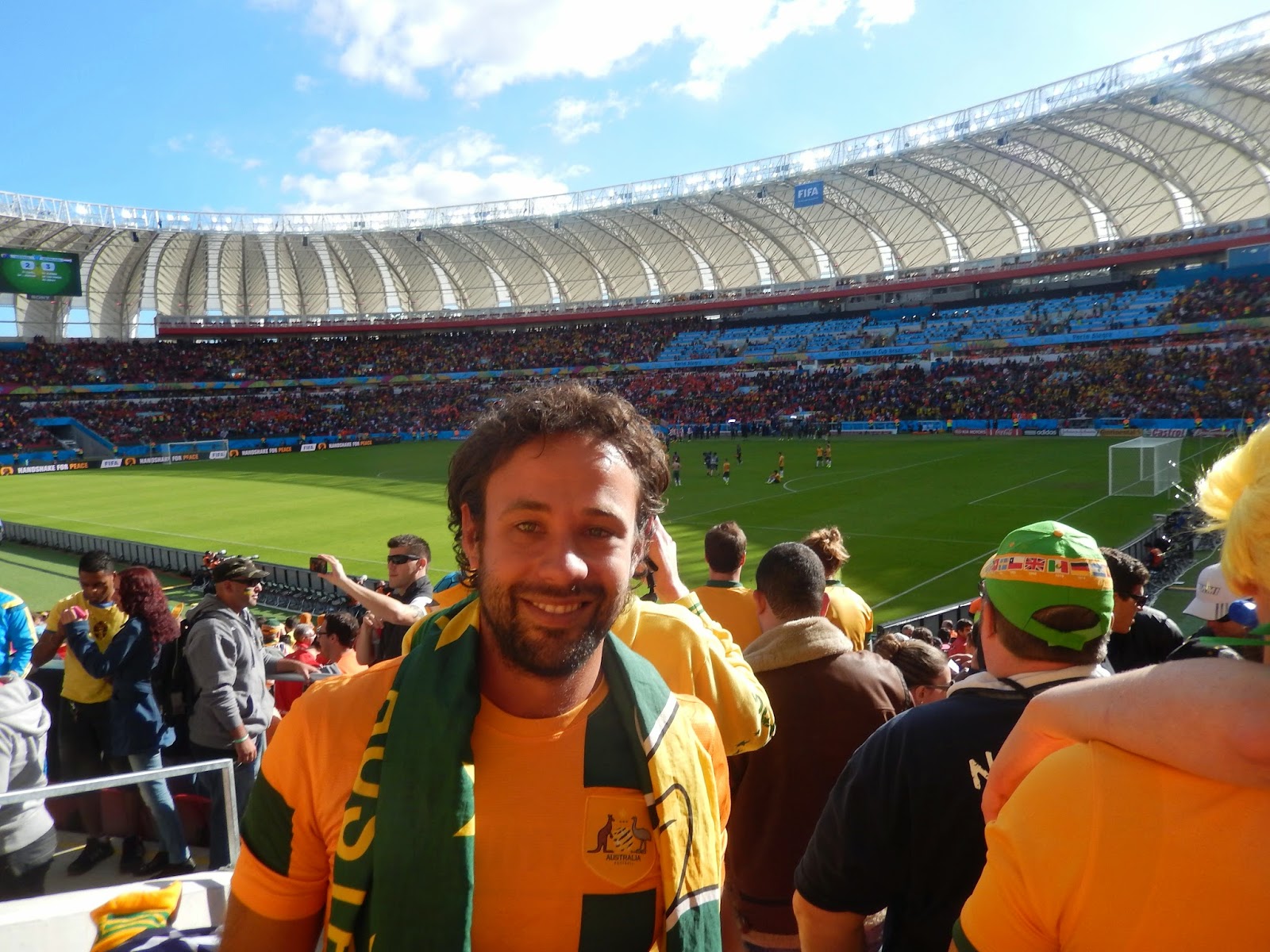 Yeah, I was there!
Porto Alegre certainly does feel different from any other city I've been to in Brazil (or other parts of South America) and with its cold wintry weather, park lined river and plenty of trendy night spots, it almost felt like being back home.

That feeling carried over to game day, where Aussies turned out in their thousands to support our boys. In Cuiaba we were completely outmatched by the fans of Chile (both in number and in voice) but against Holland we were able to match the travelling orange army in number and (I believe) better them vocally. It wouldn't be too much of a stretch to say it actually felt like a home game.

When the Socceroos gave up a goal early to the talented but sneaky Arjen Robben, many in our crowd feared we could be in for the sort of punishment the Dutch dished out to the Spanish in the opening game. If they could put five goals past the reigning world champs, what were they going to do to us?

All those fears were quickly swept aside just seconds later when who else but Tim Cahill scored one of the best goals of the tournament so far, volleying a great cross in to the back of the net. Cahill, who is normally known for using his head, showed he's just as talented with the ball at his feet and has ben applauded across the globe for his wonder strike. 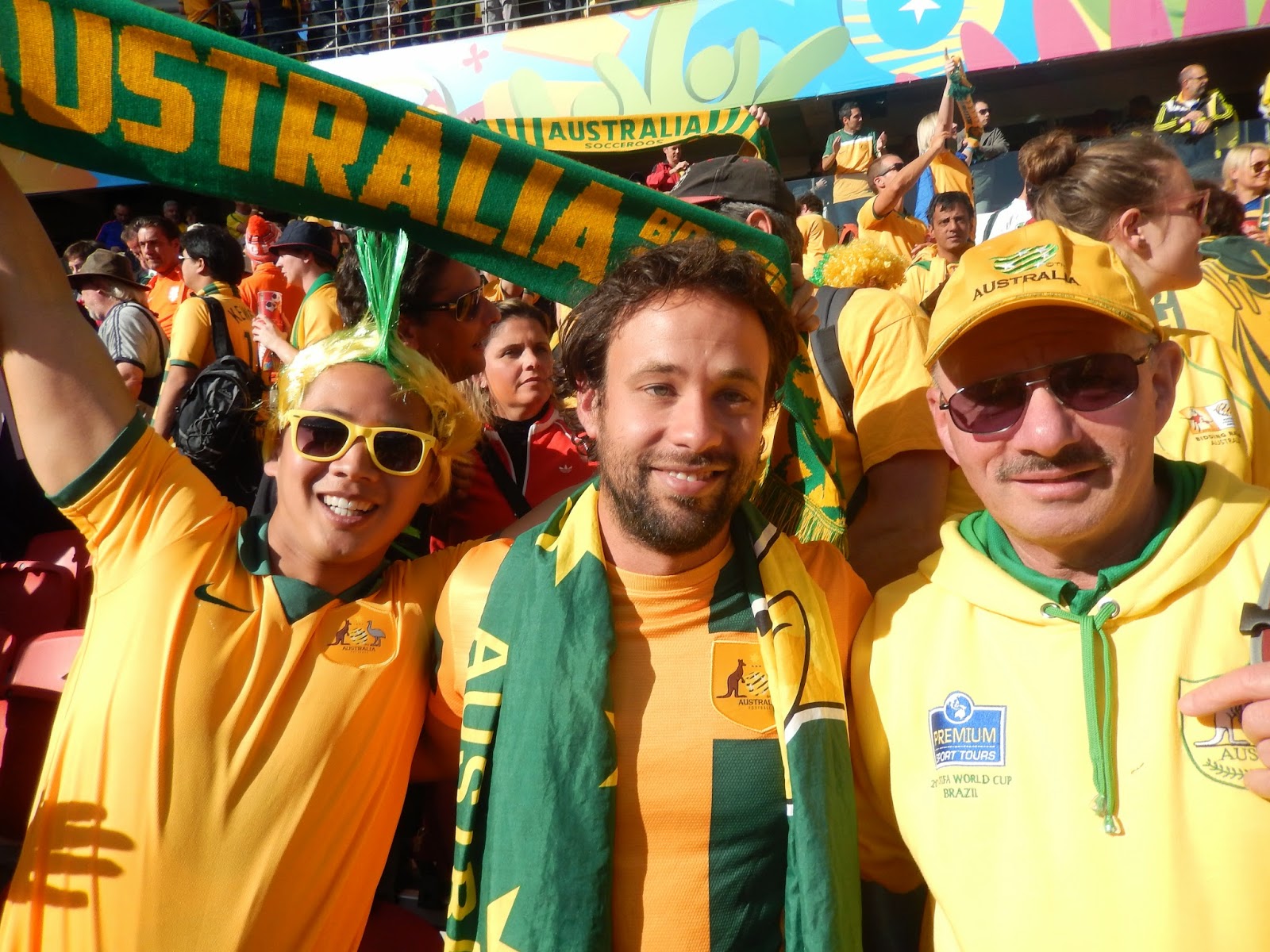 With fellow Aussie fans
Australia was back in the contest and the fans were in full voice. As the game continued Australia stood strong. Not only were we competing, we were a real chance here and everybody knew it. Early in the second half this game was still up for grabs and those of us in the stands were dreaming whether we could in fact grab the chance to go ahead - and then we did. A Dutch penalty led to Aussie Captain Mile Jedinak calmly slotting home a penalty and putting the Socceroos ahead 2-1, and sending the Aussie crowd into hysterics.

Unfortunately that wouldn't last very long. Like with Holland's first goal which Australia answered almost immediately, the Dutch were able to get back to level almost immediately, and at 2-2 this game was back up for grabs. When Holland scored again to put them up 3-2 moments after the Socceroos squandered a chance of their own at the other end, Australia had ran out of gas. With Cahill and Bresciano already on the bench after giving everything they had, the young side battled hard to get back to level in the dying minutes, but were unable to do so and once again fell short.

While disappointed, the masses of Aussies in the stands let our boys know how much we appreciated their efforts. The applause received by the vanquished side as they completed their lap of honour was every bit as equal as those given for the victorious Dutch who had booked their ticket to the next round. 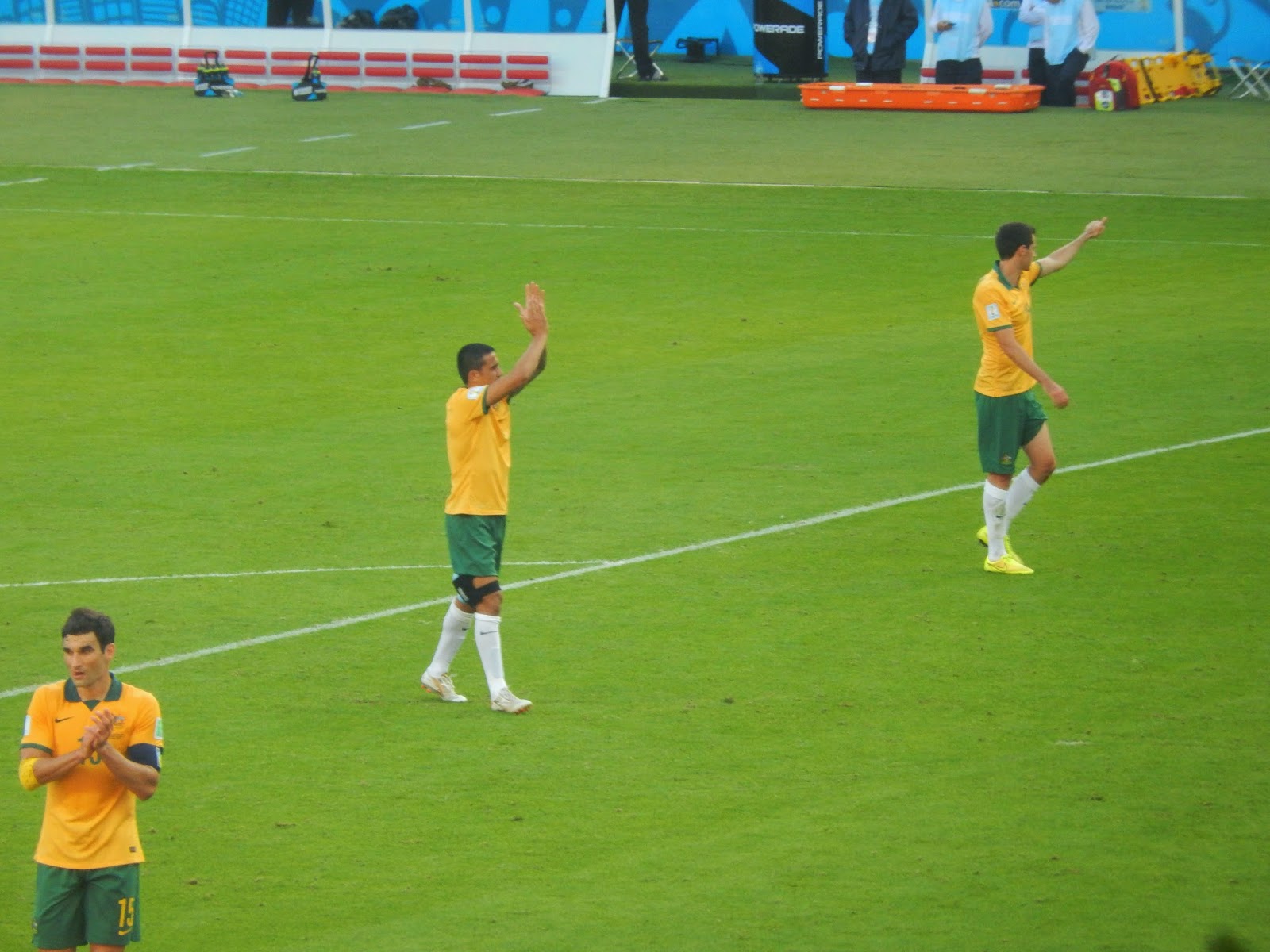 Super Timmy Cahill
The biggest applause was saved once again for Tim Cahill. As I wrote about last week, Cahill has to now be considered the greatest player ever to wear the green and gold. The way he gives 100% every time he puts on that Socceroos jersey and not only competes but delivers time after time is unparalleled. Cahill, who was the last Aussie on the park was clearly soaking up every moment. A yellow card in the first half (along with a terrible refereeing decision which gave him one in the opening game) means he wont be able to play in Australia's final match against Spain. Cahill, a man who has given everything for his country will have to watch while Australia battles for its first points of the tournament. It also means we've seen the last of Cahill at the World Cup, an event he's scored at three consecutive times and shown just how good football in Australia can be.

Hopefully he can be convinced to play for Australia at least one more time - at the Asian Cup in Australia in January 2015. While the crowd may have felt like a home crowd at times, I can think of no better for Cahill to finish of his national team career than chasing some silverware in front of his actual home fans. 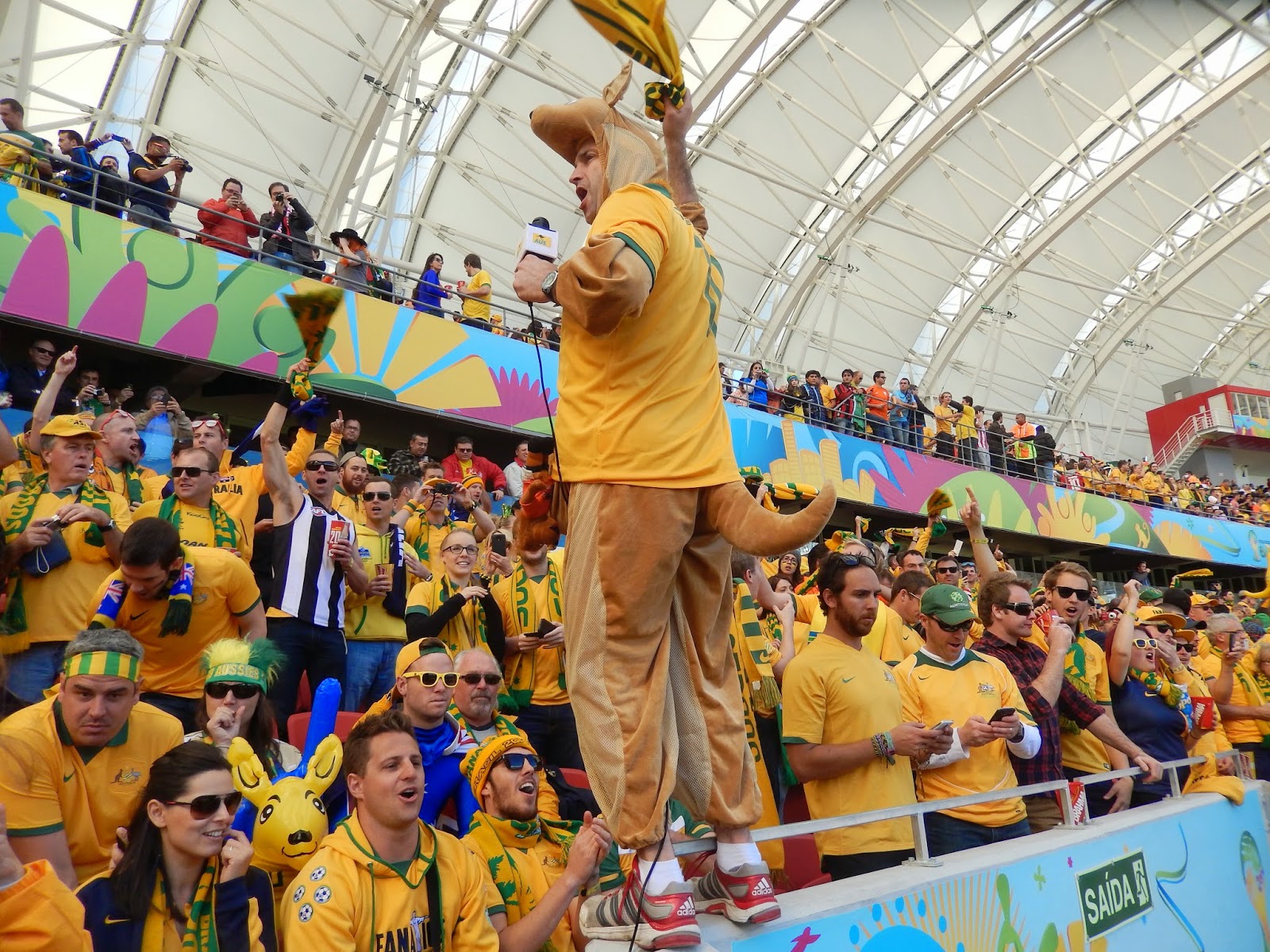 Aussie fans getting behind the Socceroos
For now I'm off to Curitiba to see Australia play its third and final game against Spain. The people of Brazil have told me similar things about Curitiba as they did about Porto Alegre.

So I'm sure that means I'm gonna have a great time.