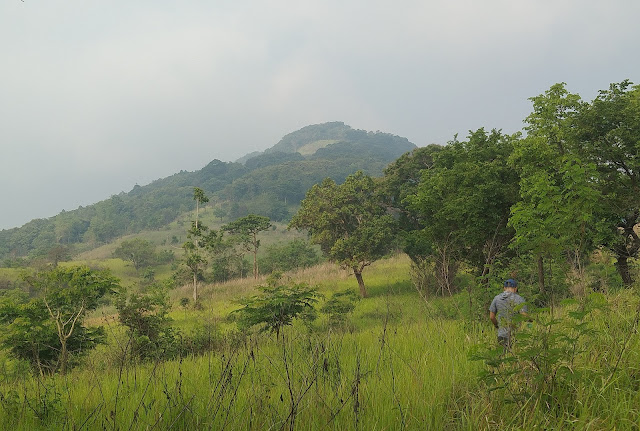 The trail leading to the summit (Model: Allan R. De la Trinidad)
DAY 1
This is my second climb within the pandemic time through an organizer.  It was an overnight climb where for the first day we just stayed overnight in a Campsite at the jump-off point.  With that, I was able to explore the vicinity of the jump-off point.

The rough road leading to the jump-off campsite
We left Greenfield District in Mandaluyong at 5:30 A.M. and we arrived at the campsite at 9:22 A..M.  Prior to this, we have stayed for 20 minutes on the gate of Bonifacio Shrine, but we did not enter the place.  We have been delayed since we are supposed to pick-up joiners from SM Bacoor, however, our driver drove fast along Cavitex and so reaching its end, we need to go back to Bacoor again using the national road. 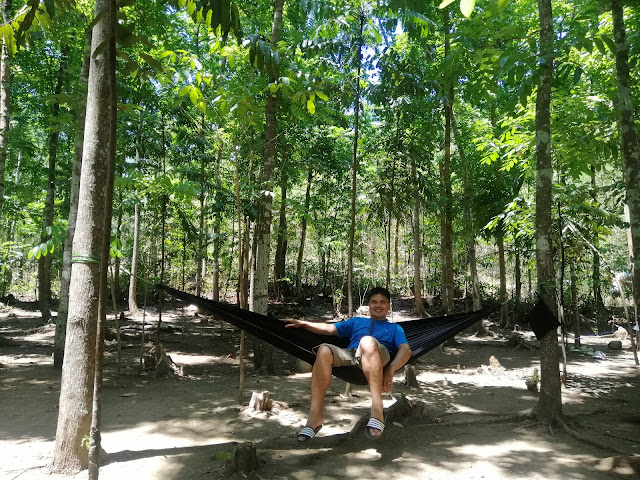 Relaxing at the campsite
When we arrived the campsite, there were a lot of campers there, but they broke camp so that they can trek to the summit.  Our group was left alone staying idle.  We had a hosted lunch and  so we were just killing our time.  However,  my colleague, Allan, who was with me explored the area after lunch.  We were looking for the best part of the river where we can have a swim. 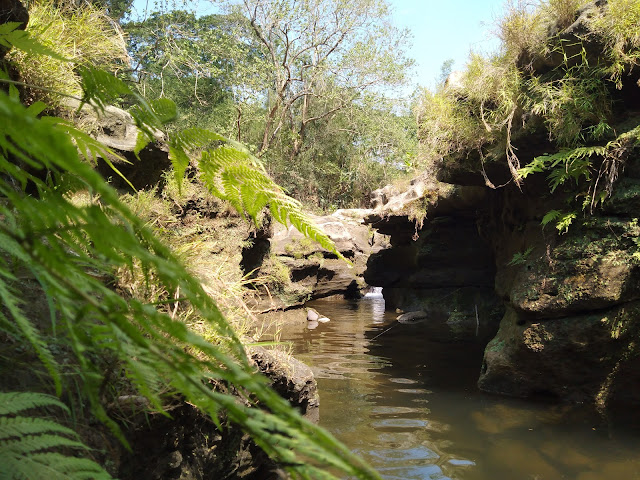 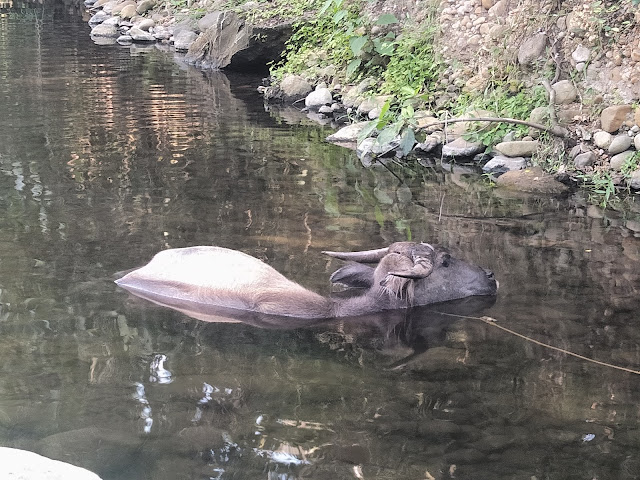 A certain part of the river with a carabao soaking comfortably
At some point we need to just simply walk on the dry parts of the river but wade on some parts with a shallow-flowing water.  Then, cross to a trail where trees served like a canopy giving us a complete shade from the searing sun. 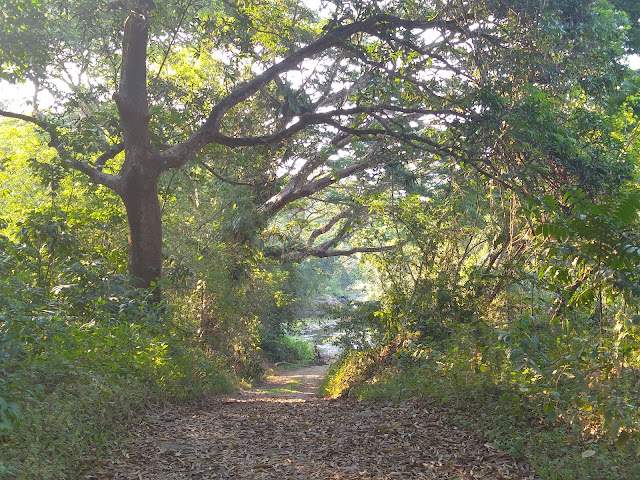 The river is down the trail
A certain 9-year old JM served as our guide.  He is actually the son of one of the two store owners operating at the campsite.  This time, we are heading to their house which is more than a kilometer away.  He assured us, there is a part of the river opposite to their house that we can swim. 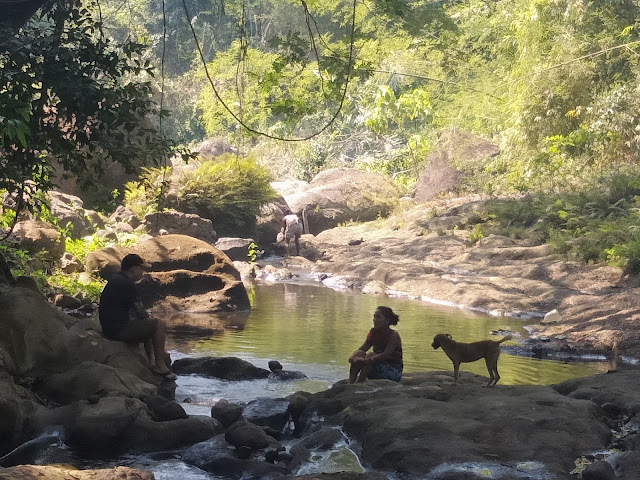 Allan having conversation with JM's mother
JM's mom was very accommodating.  In fact, they provided us with free ripe banana for free and water.  Allan was having a conversation with her, while I was enjoying a bath from the cool river covered with thick trees which is just a few meters away from their house.
The following shots are my pictures while having my cool bath in the river.  Of course, Allan served to be my photographer.  He opted not to join me which gave me a favor since he will be my photographer. 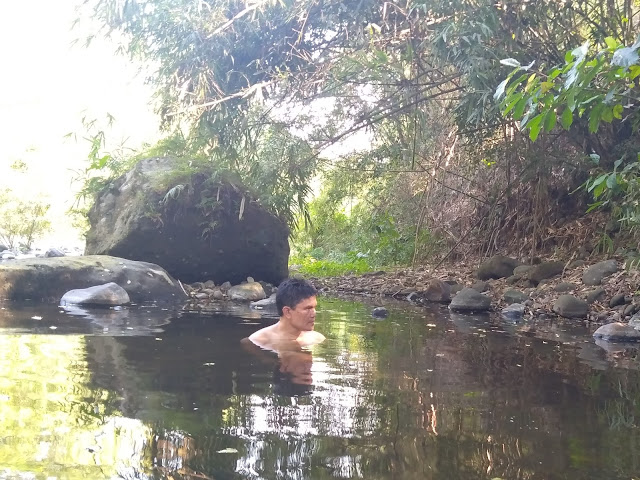 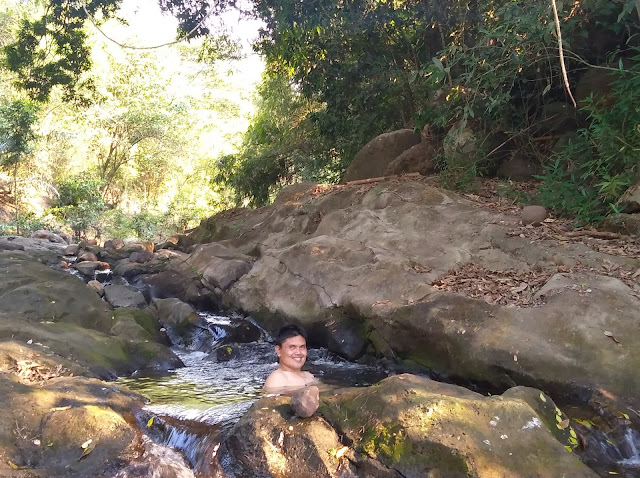 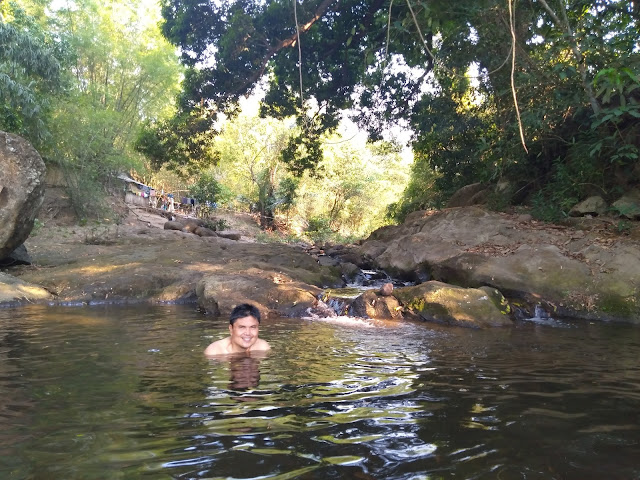 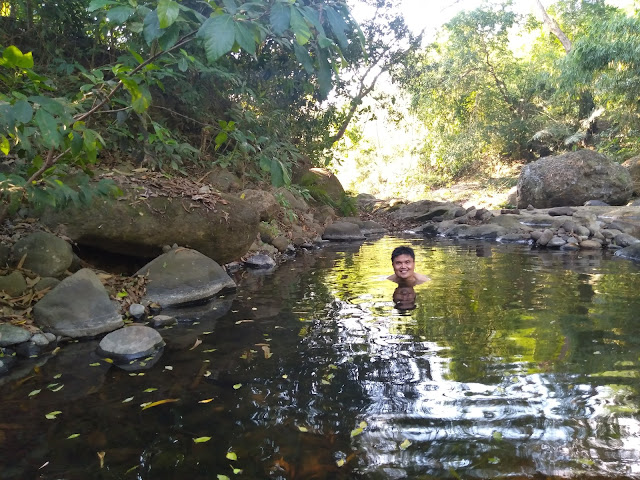 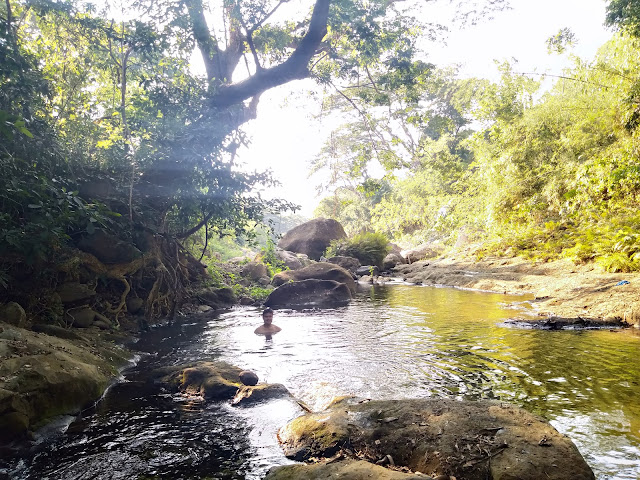 According to JM's mom, the big rocks in the river and the protruding roots along the river are completely submerged during the rainy season with the water level rising to as high as 5 meters more from the water level you see in the picture. 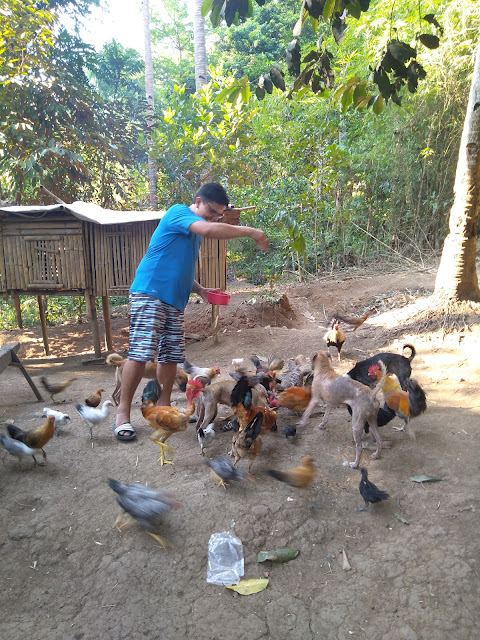 Helping to feed the chickens and dogs
After rinsing from a nearby underground spring,  Allan and I stayed to chat with the whole family.  We had a long conversation where they treated us with ripe banana for free. Earlier, we bought ripe banana from roving locals P40 of two bunches of bananas. 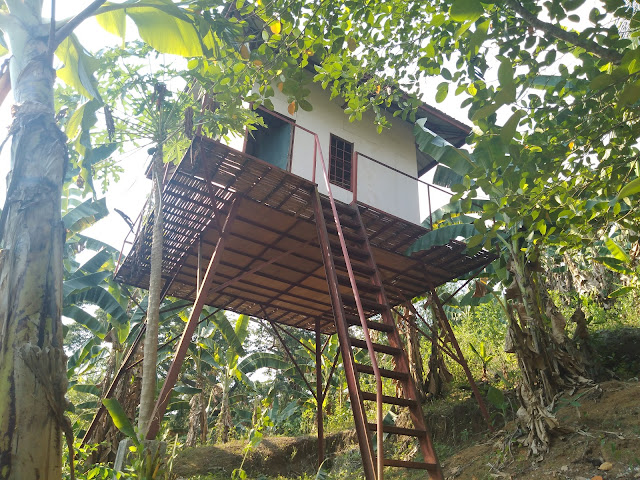 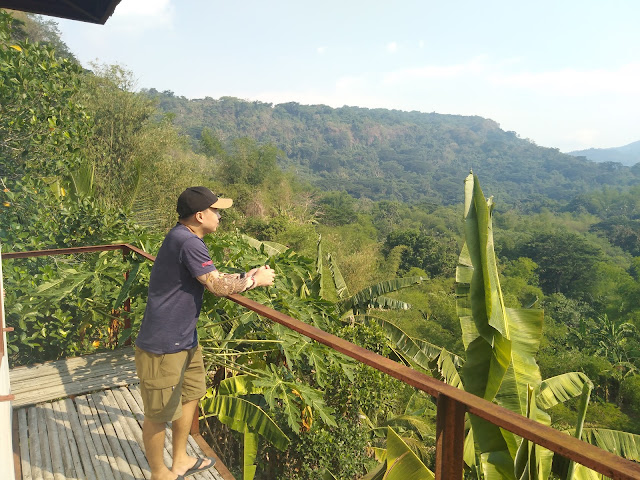 At the DENR Observation Deck (Model:  Allan R. De la Trinidad)
The observation deck serves as a watch tower to see if there are wild fires on the nearby mountains.  From this point, we can see Mount Data, Mount Santunisan and Mount Palpag.   Mount Bulbok is not visible since it is covered by the heights of the three mountains mentioned. 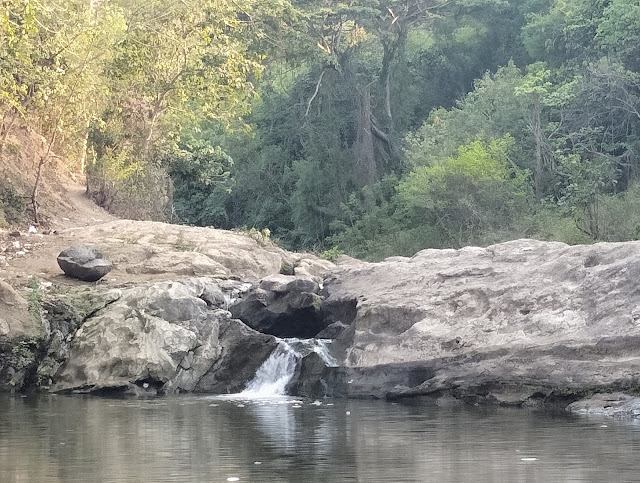 Liong Mabilog Water Falls
This water falls is just a 10-minute walk from the jump-off camp site.  During rainy season, this is partially submerged.  By the time we arrived, this has been crowded with campers.  Allan and I strolled to this place at around 4:30 P..M. when all campers and picnickers left.

Wading from this point to the campsite
It was completely an excellent late afternoon walk and we looked for some parts where we can enjoy the scenery.  Allan and I along with JM were the only ones enjoying the sceneries.

This is just a random shot on our way back to the campsite
We had so much time then, but our concern was to look for an area where can capture a network signal.  There is no commercially supplied electricity in the area, but they generate electricity through solar panel that they use to light up the campsite at night.  The network signal was extremely erratic.  I noticed that I kept on receiving messages in my mobile phone but the moment I go online, it kept on loading only.
Our tour organizer provided us with a sumptuous dinner. We really had a great gastronomic experience.  Those who summitted reunited with us at the campsite and the campsite was adorned with colorful lights.  The problem was, the campsite itself was in a low lying area surrounded by mountain ranges and so there was no wind to cool us up.  It was so warm inside our tents that we cannot sleep.  We were sweating while lying down.  Good that at almost midnight, there was a downpour and it cooled us up and sleeping invaded our senses.
DAY 2 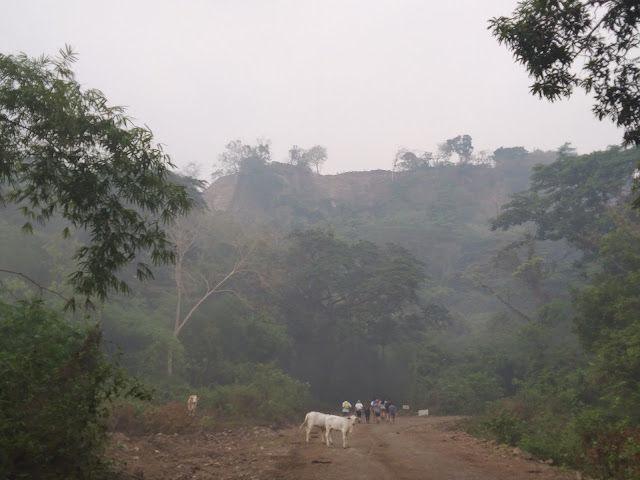 The start of the trek
The previous night during our socials, it was agreed that we start the trek at 5:00 A.M. so that it will not be too hot.  However, our organizers who were also our guides woke up late and there was not hosted breakfast meal served.   We were given coffee  to drink but I took my own Swiss Miss and bread.  I am not used not to eat rice for breakfast and so I felt weak then. We started our trek at 6:45 A.M. 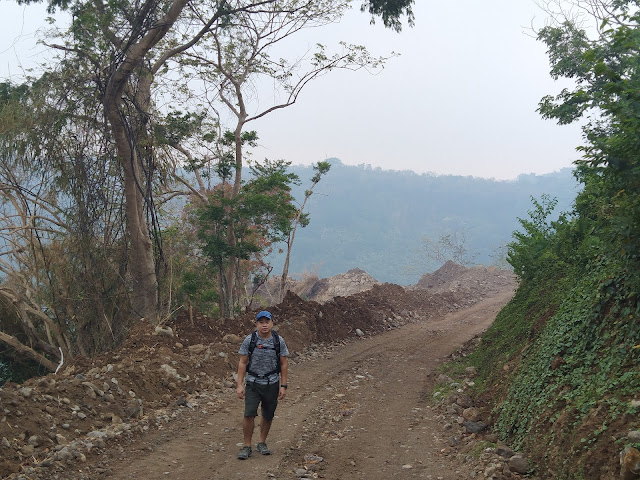 Scaling Mount Data (Model:  Allan R. De la Trinidad)
I was not feeling well at the start of the trek.  My stomach was desperately looking to be filled with rice and viand, but to no avail.  I was at the tail of the group.  I have no energy then to trek. 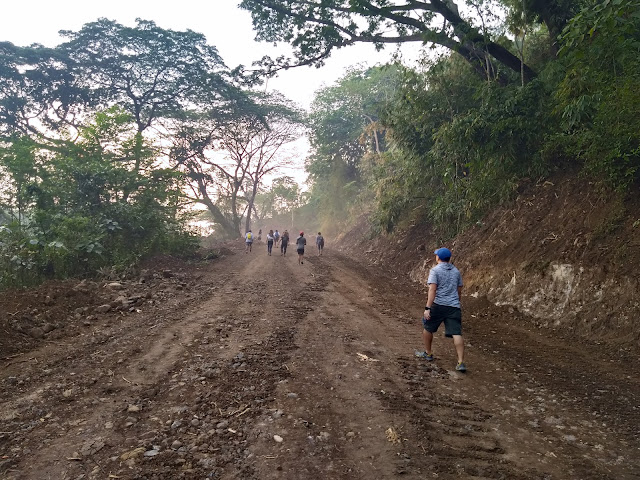 The passable road by quarrying vehicles
Initially, the trek started scaling Mount Data.  We were strutting on a very wide road used by the quarry trucks.  Mount Data is gradually losing its topographic identity as the continuous quarrying is eating up its height bringing to a lowered elevation. 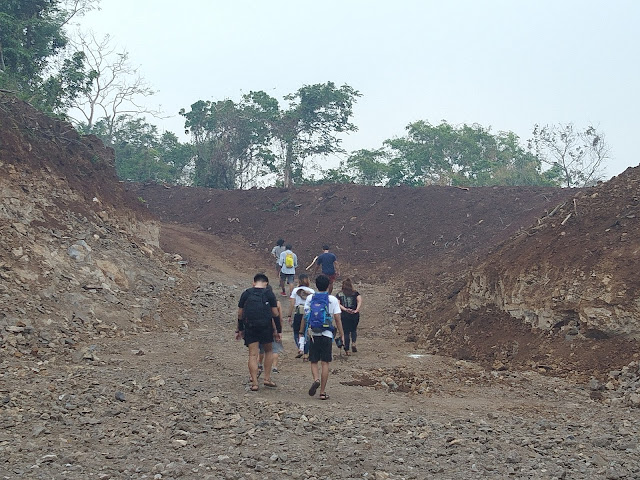 Our group approaching Mount Data's peak
If you will see, most part of Mount Data  is quarried.  It is saddening that though quarrying is illegal, the local government of Cavite does not recognize or abide the law on anti-quarrying. 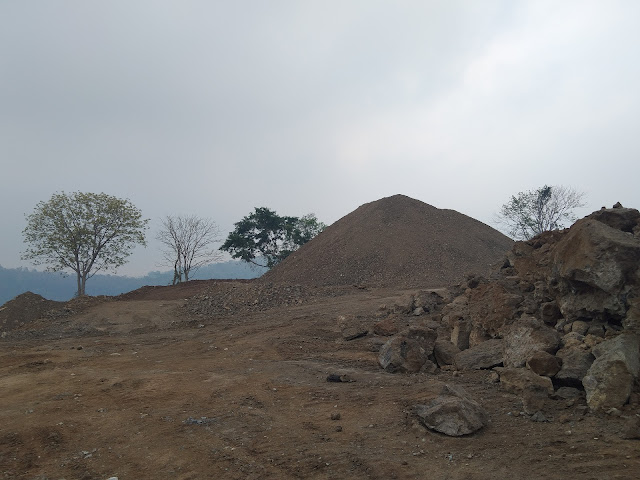 The denuded peak of Mount Data
Based on the reading of our Altimeter app, the peak of Mount Data was at 101 MASL or 331 feet above sea level.  Whether is it was accurate or not, I wouldn't care much less, because I knew that in just less a time, this elevation reading will even be significantly reduced due to continuous quarrying. The ascent to Mount Data was just 25 minutes. 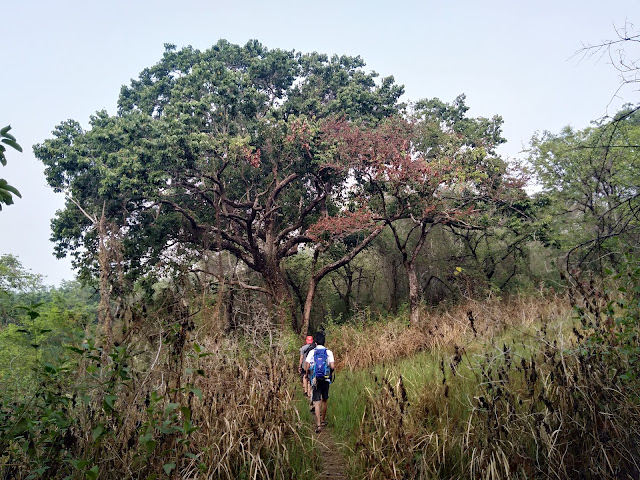 The open trails after Mount Data
According to JM's mother, after Mount Data, we are going  to scale first Mount Santunisan and Mount Palpag.  But our guides have no idea about this.  For the 1 1/2 hours trekking, Mount Bulbok was not visible to us. 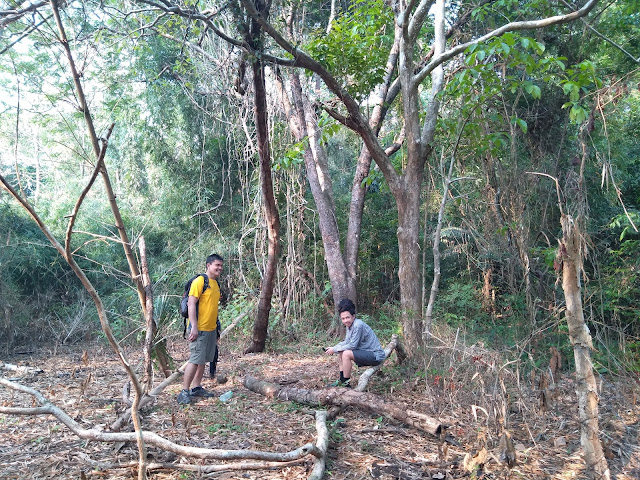 With our guide waiting for others for regrouping
The trails were consist of gradual assaults.  There were no big boulders and roots to step on.  It was simply walking.  We rarely had take five. 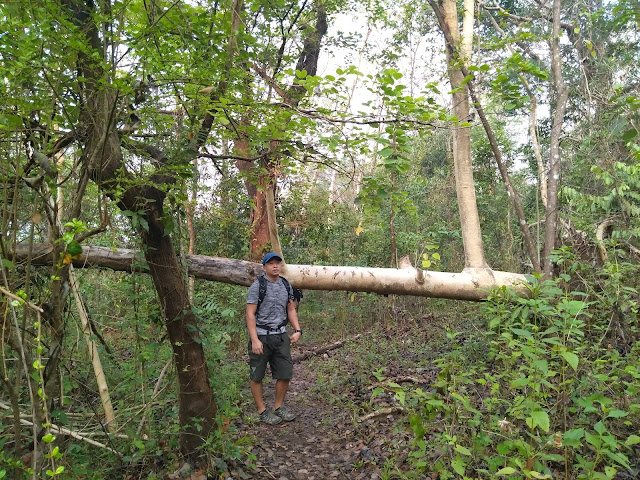 An uprooted tree along our trail 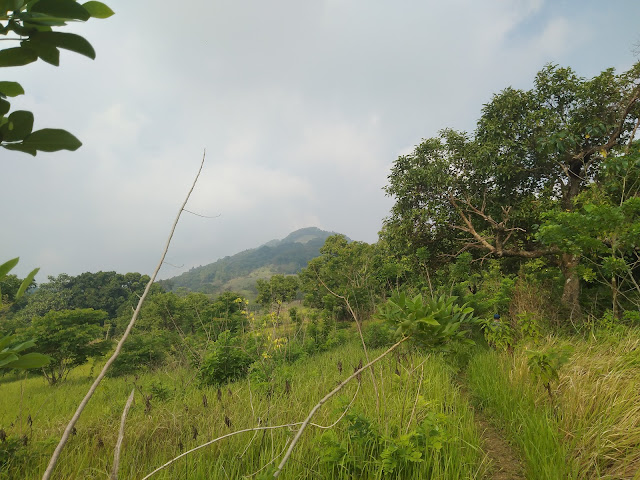 The sight of Mount Bulbok peak visible after 1 1/2 hours trekking
As far as I can remember, we had scaled two major and continuous assaults and I want to assume that these are the peaks of  Mount Santunisan and Mount Palpag.   However, I am not sure. 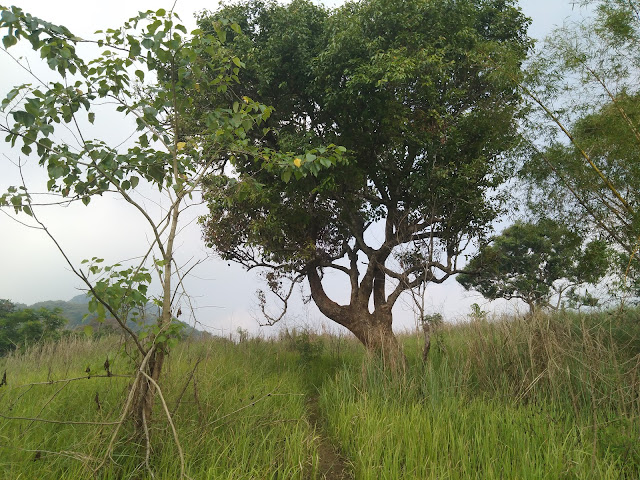 Trail leading to the summit was gradual
Noticeably, the trails are not that highly abused, because only a few mountaineers are on this mountain.  Some parts of thickly covered with grasses. 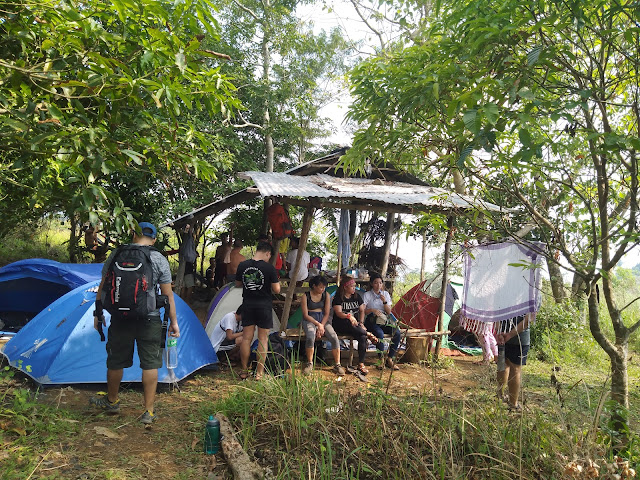 The campsite near the summit
The campsite has been erected with a DENR monitoring team house, but is already abandoned.   I suppose, the place is perfect for an overnight camping.  However, it can only accommodate few tents. 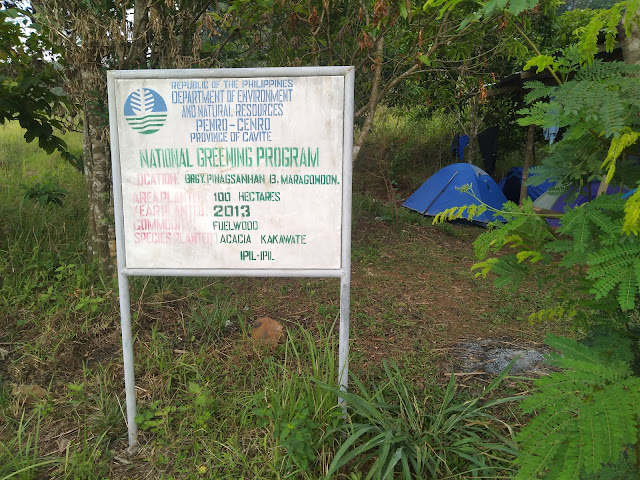 The DENR Project Marker at the campsite
From this elevation, Mount Marami and Mount Palay-Palay (Pico de Loro) are visible to the contour of the mountain ranges. 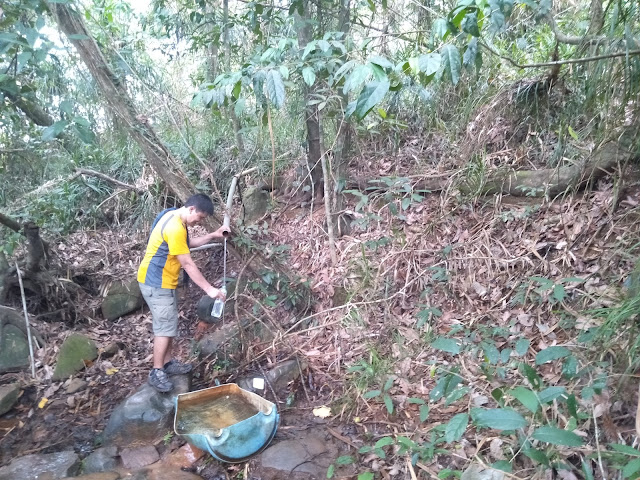 The water source near the camp site
There is no problem to camp at the DENR abandoned project monitoring house, since there a water source just a few steps away.  The water is safe for drinking and you can even take a bath if you like. 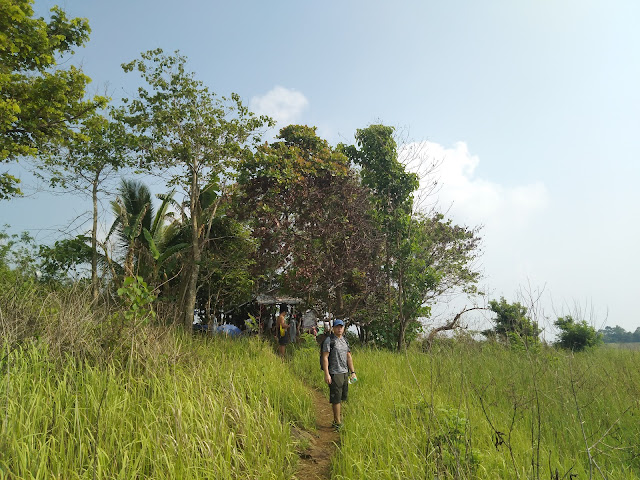 On my way to the summit
Noticeably, the trail going to the summit is not really established.  Usually, those who climb here according the one guide (not our guide) I talked  to are simply satisfied to the abandoned DENR house. 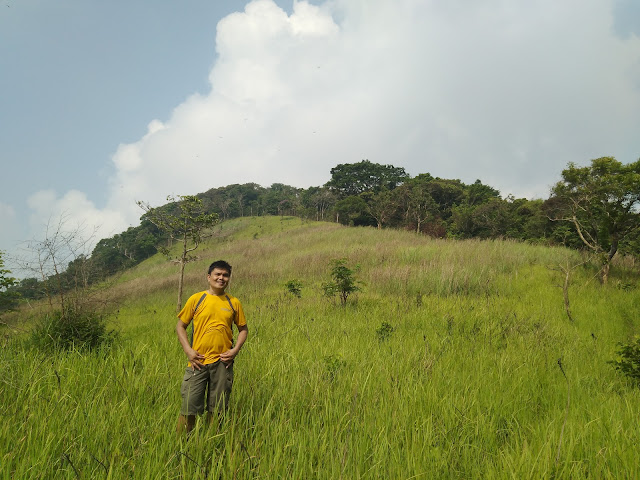 Pursuing to scale the summit

The stunning view as captured from the summit
Finally, according to our Altimeter app, the elevation is measured to 645 MASL or 2,116 feet above sea level.  Mount Marami only measures an elevation of 405 MASL of its peak while Mount Palay Palay is at 664 MASL.