The dish “Hainanese Chicken Rice” has a very interesting story. Here are some snippets:

It is an ensemble of 4 parts. 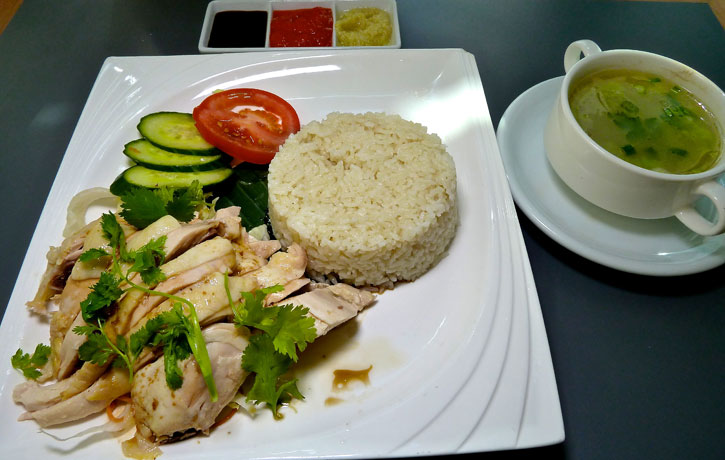 This chicken dish originated in the Wencheng District of Hainan, an island on the south coast of China. This was brought over to Malaya and Singapore by the immigrants from the late 19th Century.

The Hainanese immigrants worked in the food and beverage sector – operating coffee shops, hawker stalls and providing the catering in government and military establishments.

In the Hainanese enclave of Singapore (Middle Road, Purvis Street and Seah Street) in the 1940s, Mr Wong Yi Guan started selling Hainanese Chicken Rice in 2 baskets carried by a bamboo yoke over his shoulder. Mr Wong prepared his dish within the physical limitations of the 2 baskets.  With the limited amount of liquid that he could carry, he used the chicken stock to cook the rice. The sauces included minced chilli and ginger.

In the 1960s, Cantonese cooking techniques were used to get the chicken meat juicy and tender. The chicken was poached in chicken stock and then dipped in ice water.

As Singapore developed economically in the latter half of the 20th Century, stalls in coffee shops and food courts started to serve Hainanese Chicken Rice. It has become an icon of Singapore Food. It is often served in international or global events as the national dish.

A feature length motion picture “Chicken Rice War” was released in Singapore in 2000. It is a romantic comedy loosely based on “Romeo and Juliet” but in a Singapore Setting.  The 2 families run Chicken rice stalls and the conflict is about secret family recipes.

The Singapore National Library has an authoritative posting on Singapore’s national dish.

Hainanese Chicken Rice is widely available in Malaysia as well, as both countries have a very similar culture.  As the popularity of the dish spread, variations developed.

Rice balls are moulded by hand when the cooked rice was cooling down. Street vendors in the past had used rice balls as it was easier to transport. Apparently, it is able to stay warm for longer. These rice balls are only found in Malacca (Malaysia).

Bean Sprouts are blanched and served with white rice instead of the seasoned rice. This preparation is found in Ipoh (Malaysia). 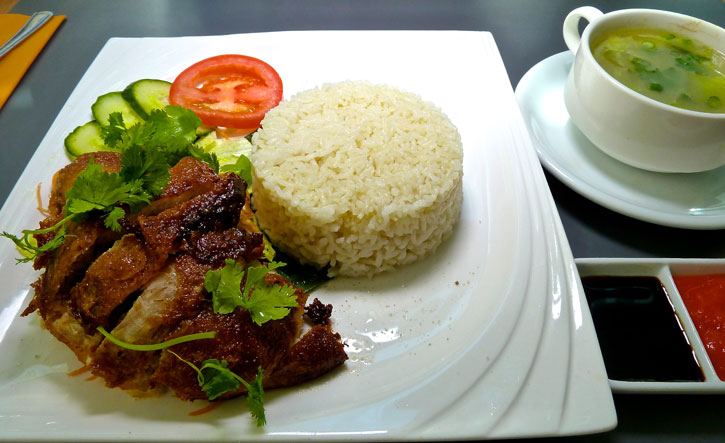 Steamed Chicken: It is said that the flavour is more subtle.

Hainanese Chicken Rice is a common dish in Thailand where it is called Khao Man Kai – literally “oiled rice with chicken”.

The Hainanese Chicken Rice is part of the menu in most Singapore and Malaysian restaurants in various parts of the world. There are numerous blogs describing their experiences.

It was mentioned in the UK press in the food reviews – the Guardian – Yotam Ottolenghi recipes: “Hainanese chicken rice, plus Penang acar”.

There are Hainanese Chicken Rice specialist shops in Japan and China.

Malaysian Tourism Minister – Dato Ng Yen Yen had, in an announcement in 2009, laid claim to a number of foods that were Malaysian National Dishes. This included Hainanese Chicken Rice. The naming of this dish sparked off a “food fight” with Singaporeans on the Internet. However, she managed to retract this statement.

There are thousands of recipes on Hainanese Chicken Rice on the internet including YouTube, Quora and also cookbooks on Singapore Food. This post on Quora provides a list of some of the “better recipes”

There are numerous comparisons for the best places for Hainanese Chicken Rice in Singapore like:

The Best Chicken Rice in Singapore

The original Wengcheng chicken – a bony fowl with very little flesh is cooked in boiling water. It is served with rice, thick with oil and accompanied by ground green-chilli dip.

This dish has evolved to become the Hainanese Chicken Rice that we know of today.

Chicken Rice – aromatic and tasty.  The rice grains are fried with the oil from chicken fat, garlic and sesame. It is then boiled in chicken stock.

Chickens are especially selected for meat and taste.  It is poached at 90 Celsius in chicken stock. The poached chicken would then be immediately dipped in a tub of iced water. This is to get the chicken meat juicy and tender with a silky and slippery texture.

The soup is made from the chicken stock. The condiments are prepared from minced fresh chilli, garlic and ginger.

This story is similar to that of the Pizza. In the 18th Century Naples, a yeast based flat bread with a tomato topping was developed. This dish crossed the Atlantic to the USA. It is now a flat bread with cheese and a innumerable combinations of toppings. More important, the Pizza is now a huge world- wide industry worth billions.

For me, it is the taste and texture of the chicken together with the whole ensemble of the other component dishes.

Rice – fragrant aromatic rice with a slight hint of the flavour of chicken.

Chicken – The texture of the chicken has to be soft and silky smooth.  The skin is lightly springy with a layer of congealed fat between the skin and flesh.  The Chatterbox in Mandarin Orchard Hotel,  Singapore  has really exquisite texture of the Chicken in this dish which, in my opinion, is incomparably the best we have tasted. 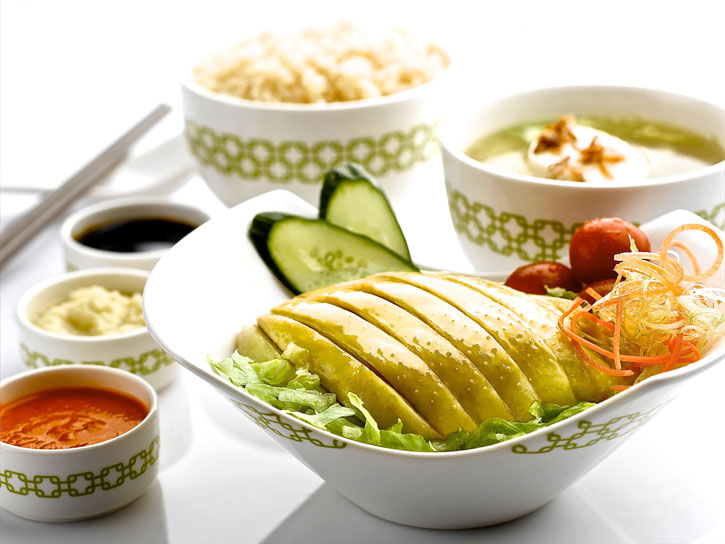 The chicken meat relies on its natural flavours for taste as no spicing, flavouring or sauces are used.  The type of chicken selected is crucial. We have found the Corn Fed Chicken gives the right taste and texture. These components together with the soup and condiments make the whole ensemble of Hainanese Chicken Rice.

The simplicity of the dish belies its complexity in preparation to get that silky smooth texture of the chicken. The taste and flavours are so subtle that a little difference in cooking conditions can make a huge difference in the texture and flavour. Helen has experimented on the various methods of refining the gentle art of cooking the chicken but it is still work in progress to master the “magic formula” of Chatterbox, the standard bearer of Hainanese Chicken Rice in our opinion. 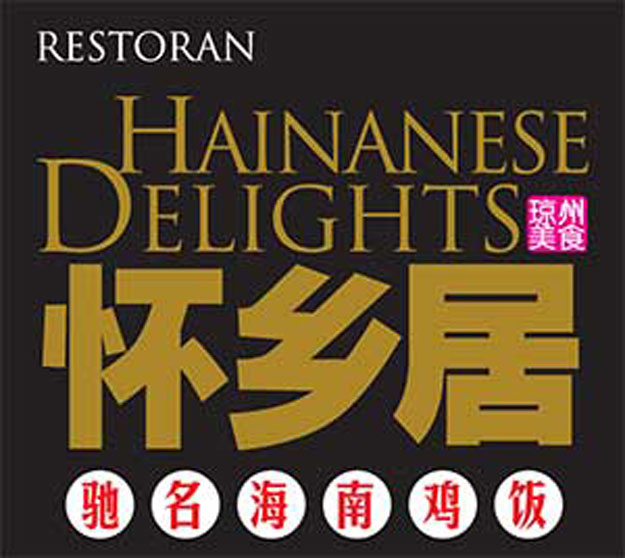 On our recent trip to Penang, the island synonymous to street food haven, we had lunch and dinner at Hainanese Delights, a delightful restaurant in 1926 Hotel Heritage (the year it was built) owned by  George Wong and his two brothers. He said that this restaurant is to showcase dishes created and perfected by pioneer Hainanese immigrants in Malaya who were renowned for their cooking prowess. The cooking techniques were derived from the traditional methods of Hainan Island but the dishes were catered to Malaya and Singapore using local ingredients. These dishes have evolved under the influence of local and foreign cultures. George and his brothers are retired from their employment and it has been their ambition to have a restaurant that recreates the Hainanese food of their youth.  They are Hainanese and have a Hainanese cook to ensure the authenticity of the food.

We have always been interested in finding out the origins of local favourites such as Hainanese Chicken Rice, Bak Kut Teh, Curry Kapitan, Inchee Kay Bin amongst others and it was a good opportunity to find out from them.

George related that the Hainanese migrated to Malaya and Singapore in search for a better life. Life was tough in poverty-stricken and war-torn China in the early 20th Century. Many left their homeland and worked as cooks to the Colonial British Administrators and the Military. Some set up coffee shops and food stalls in various parts of the country. Their repertoire and recipes were adapted to the taste buds of the British colonial community as well as the local population.

They developed a British colonial cooking style with a touch of Asian flavour that is unique to Malaya such as chicken, lamb, beef stews or pies; chicken chop or fish and chips. Today these Southeast Asian colonial staples can still be enjoyed at the Coliseum Café or the Colonial Café at Majestic Hotel Kuala Lumpur.  The Hainanese cooks also created innovative dishes taking inspiration from local recipes and ingredients to suit the local taste. These celebrated dishes that have gained popularity in Malaysia and Singapore today include Hainanese Chicken Rice, Curry Kapitan, Inchee Kay Bin, Assam fish and prawns to name a few.

George enlightened us on the origins of some of the famous dishes. He informed that Hainanese Chicken Rice originated from Wenchang in Hainan. He also related fascinating stories of how some of the local favourite dishes got their names such as Curry Kapitan. The story goes that the “Captain” or manager asks the cook what he is preparing for the day. The reply was “Curry, Captain.”  Various versions of the origin of the name of this curry have evolved over the ages.

These two dishes have crept into the Nyonya repertoire of food with their own interpretation.

Our lunch included their specialities of Inchee Kay Bin, Yam Duck, Lor Bak (local chicken sausage wrapped in dried bean curd skin) and fried spring rolls. Unfortunately, the Hainanese Chicken was sold out. The food was good, so good in fact we arranged to go back there with some friends for a proper dinner that night. These were some of the dishes for dinner recommended by George. 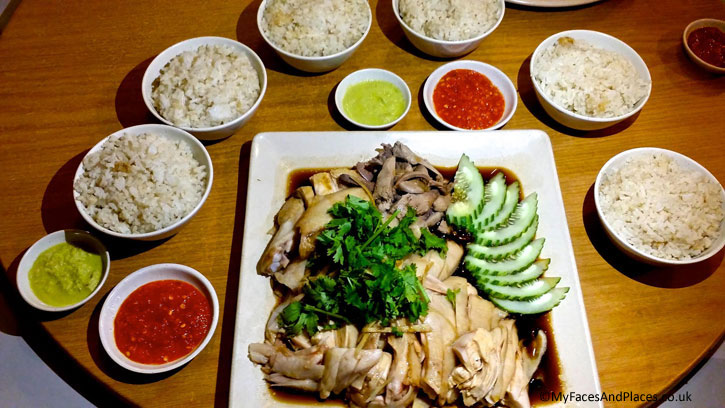 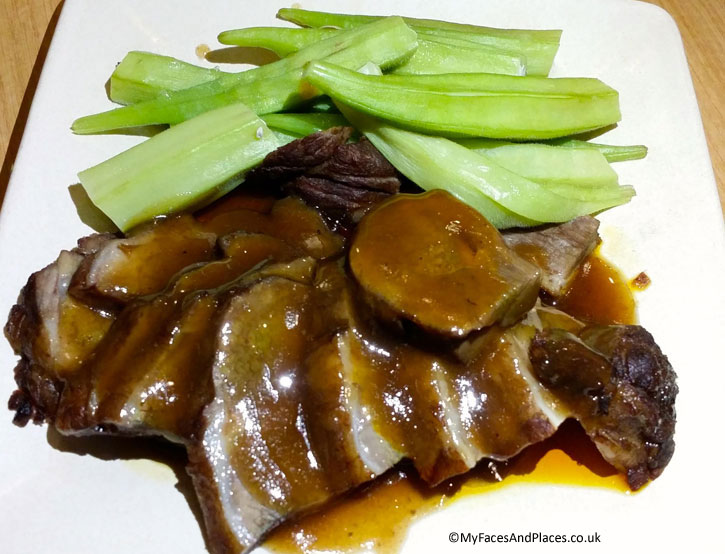 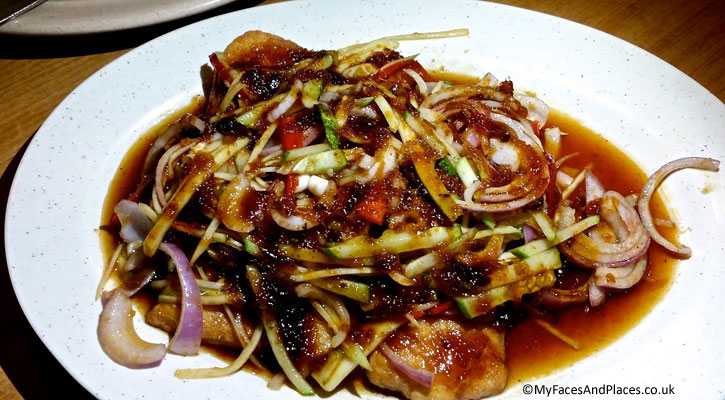 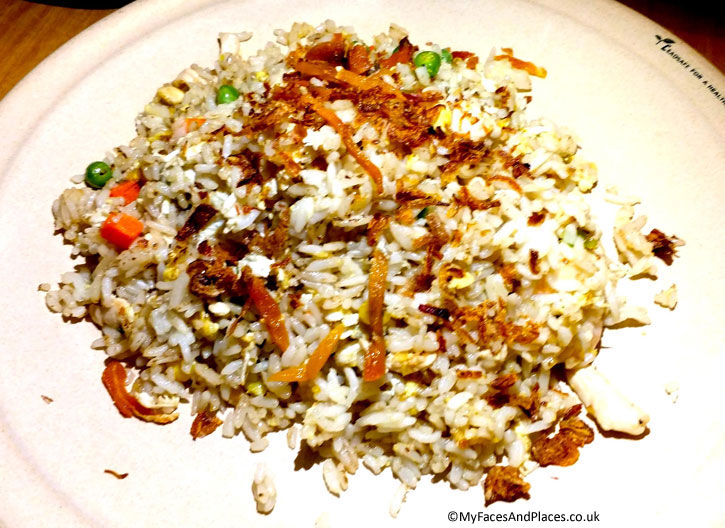 The flavours of the food reminded me of my childhood. As a child, my family used to eat food prepared by Hainanese cooks in either the Colonial British establishments or Hainanese coffee shops. It is a different style of cooking, more of steaming or braising and less stir frying.

The food was great. The Hainanese Chicken rice was excellent – the chicken was smooth as well as silky. Most importantly, it had the correct required taste. The fluffy rice cooked in chicken stock complemented the chicken nicely.  The other dishes were also delicious. We were glad that we went back to the Hainanese Delights for dinner after having lunch there earlier that day. We will definitely be going back there on our next visit to Penang.

The Best Hainanese Chicken Rice that we have tasted.

Taste in food is a subjective matter so these are our personal opinions. It is easier to opine as it is one particular dish where the criteria has been laid out. The chicken rice has to be fragrant and aromatic with a subtle taste of chicken. The chicken not only has to be naturally tasty and flavourful, the texture has to be soft, subtle but silky smooth and springy. Needless to say, it is the overall combination of the 4 components that contribute to form the opinion.

The Restaurant that best fitted these criteria is Chatterbox at the Mandarin Orchard Hotel in Singapore. Mind you, it is way the most expensive at Singapore $28.90 per serving (Jul 2016). In joint second is are the Chicking in Kuching, Malaysian Borneo and Hainanese Delights in Penang. We have tried many restaurants based on recommendations on our visits to Singapore and Malaysia.

We have to thank Alan Chew of Discovery Overland for showing us the best of Penang – its sights and its food. He led us to this gem of a place to which this food review covers.