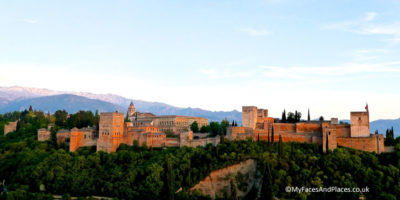 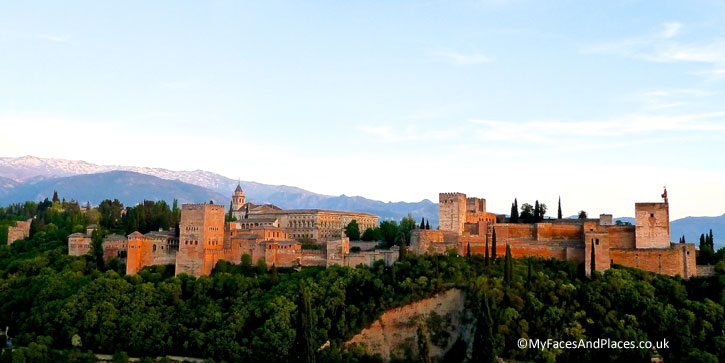 The splendour of the Alhambra in Granada

After the memorable adventure in Seville and Ronda my band of seven amigos continued our journey into the heart of Andalusia to Cordoba and Granada. This is where the splendour of the Moorish era is most prominent through its magnificent palaces, forts and gardens. Every brick and mortar in these ancient monuments echo the power and influence of the greatest Islamic civilisation in Western Europe from the 8th to the 15th century in Al-Andalus, the Moorish name for Andalusia. Such was the intellectual and physical wealth of culture of the Islamic civilisation that even the Christian rulers who eventually took over the reign admired and respected the incredible architecture left behind by the Moors and continued to use them as royal fortresses and converted mosques into churches instead of destroying them. 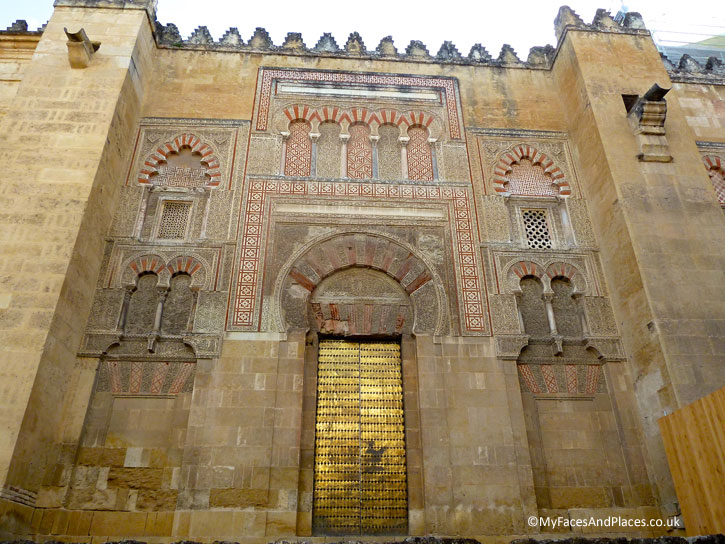 The gorgeous facade with the golden door of the Cordoba Mosque-Cathedral.

This ancient city was the political and intellectual capital of the Caliphate of Cordoba since the advent of Islamic rule from the 8th century. Under the rule of the Caliph Al Hakam II, it became the centre of education and learning for he was a lover of books and collected thousands of books for his library. Under his rule, hundreds of mosques and splendid palaces were built, irrigation system for agriculture and infrastructures were developed. Cordoba was at the zenith of its importance in that era but it did not survive the march of time. It soon declined in importance but its Moorish legacy lives on and today UNESCO lists its historic centre as World Heritage Site.

One of the most magnificent legacies of Moorish architecture is the Mosque-Cathedral of Cordoba. The Visigoths, also known as the Goths, a nomadic Germanic tribe, first built it as a church dedicated to St Vincent in the 6th century. Following the Islamic invasion in the 8th century, the church was demolished and in the year 785, the construction of the Great Mosque began, a religious monument that was to become the flagship of Western Islam. The mosque went through four stages of transformation by various Islamic rulers who added and improved on the construction using the materials from the demolished church and adding new ones including semi precious stones and gems. It became the centre of not only religious but also cultural, social and political activities. When King Ferdinand III, reconquered Cordoba in 1236, it was consecrated as a Catholic Cathedral and today is dedicated to Our Lady of the Assumption. 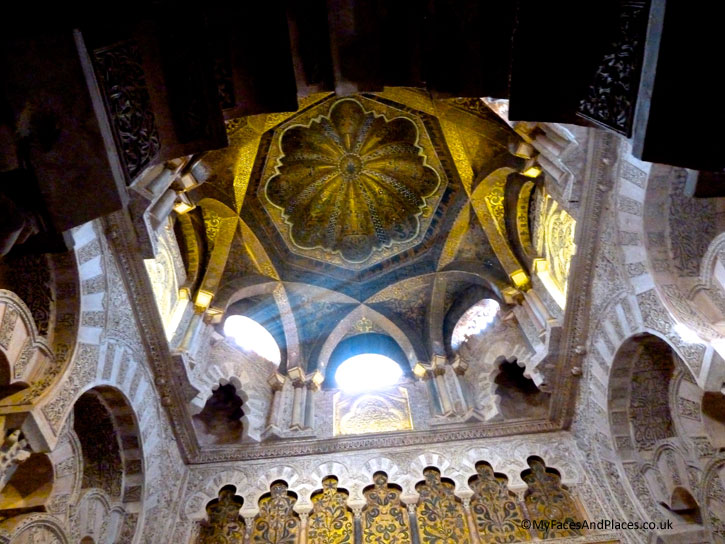 The divine gilded Mihrab in the Mosque-Cathedral of Cordoba. 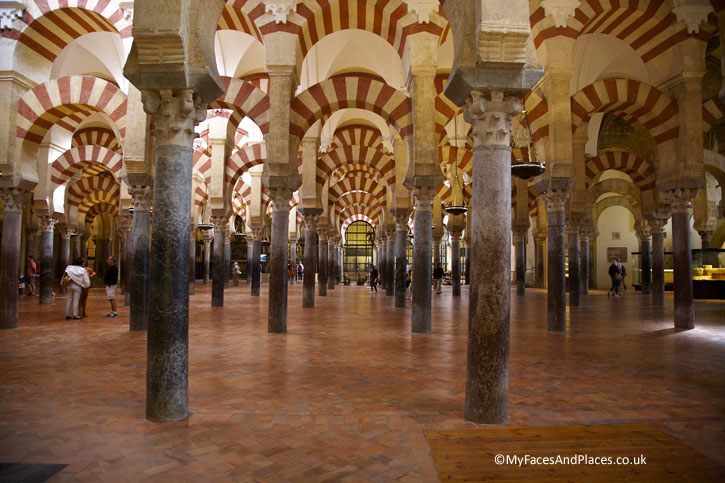 Walking through the Cathedral is like walking through a timeline of Moorish rule and Christian reconquest. To describe it as stunning would be an under- statement. It is a marvellously breath-taking piece of architectural wonder created by skilled Byzantine artisans, craftsmen and architects. Every inch of the cavernous interior is etched with exquisite carving and calligraphy of Islamic art with walls clad in mosaics and azulejos hand painted tiles. The arcaded hall hosts a forest of 856 columns ornamented with jasper, onyx, marbles and granite and the horseshoe arches are designed in alternate red and white voussoirs, a method often found in Arabic architecture. The masterpiece is the exquisite mihrab, a gilded prayer niche with a dome fashioned out of one single piece of marble decorated with Byzantine mosaics of gold. It was built in geometric design in the direction of Mecca with acoustic to amplify the voice of the Imams.

What is enthralling about this building is at the heart of this expansive structure built by the Muslims, lies the main chapel of the cathedral built in the shape of a Latin cross, described as “an ingenious integration of the caliph structures with the gothic, renaissance and baroque creations”. When we were there the choir was singing Ave Maria with the choirmaster trying to perfect the harmony. It was a heavenly music to our ears. 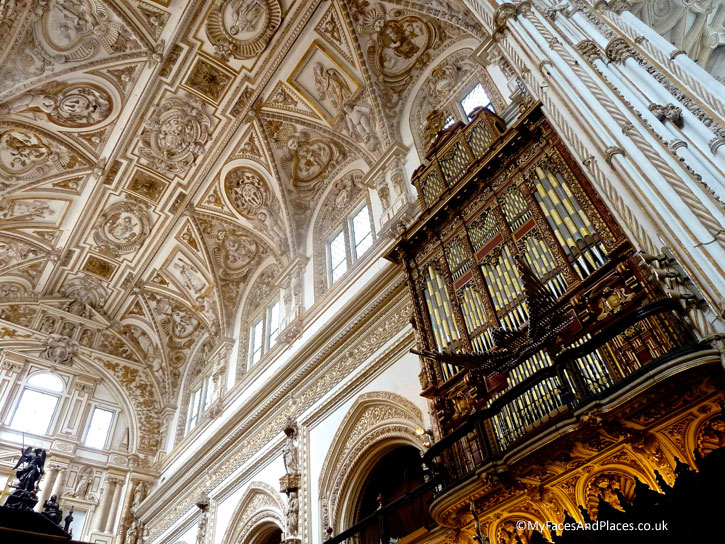 The glorious ornate ceiling of the chapel and the organ inside the Mosque-Cathedral of Cordoba.

A Feast of Haute Cuisine 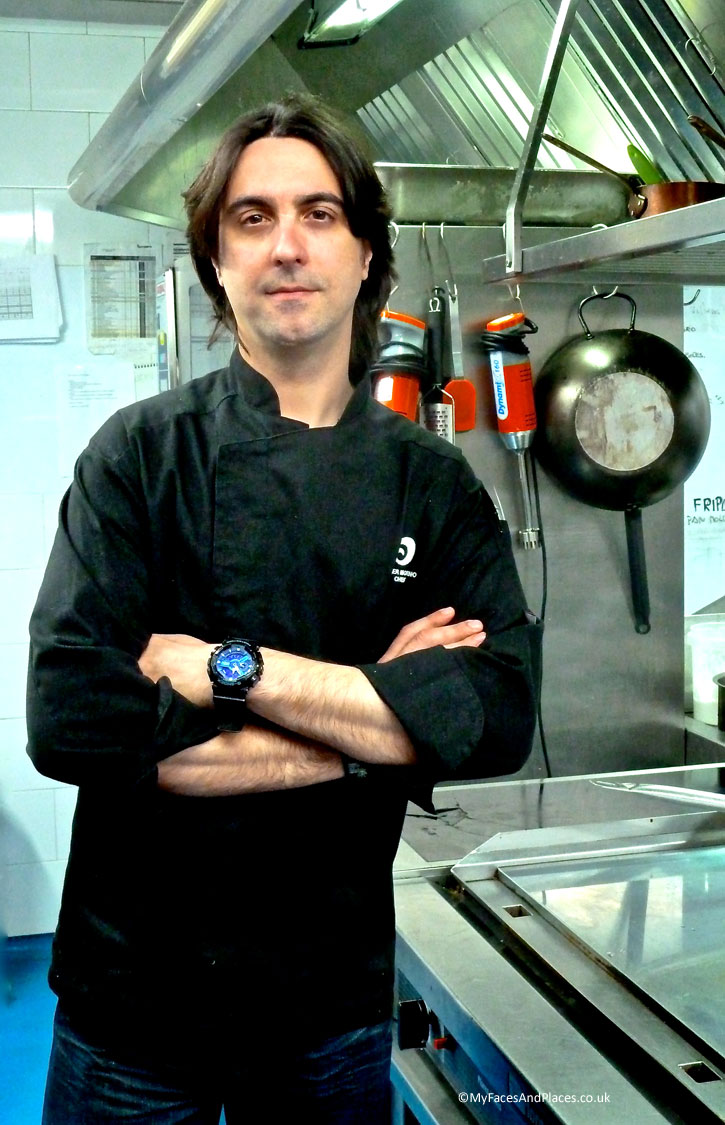 Rosa, our ingenious fixer, had done it again. This time she had managed to persuade the executive chef of Palacio Del Bailio, a five star hotel in Cordoba, to cook a private dinner for us. Chef Javier Moreno, a dashing young chef who has a penchant for Asian cuisine, displayed his culinary wizardry by rustling up a delectable feast of nine courses of sampler meals of which the highlight is the squid ink coated beef. Trained under Michelin star chefs and partly self-taught, he transforms classic dishes with a modern trend of cooking with foam, air and gelatine.  His skill and stylish plating were both a visual feast and a pleasure to the taste buds.  The restaurant is built above a Roman ruin and the glass floor of the outfit enables guests to view the ruins below. 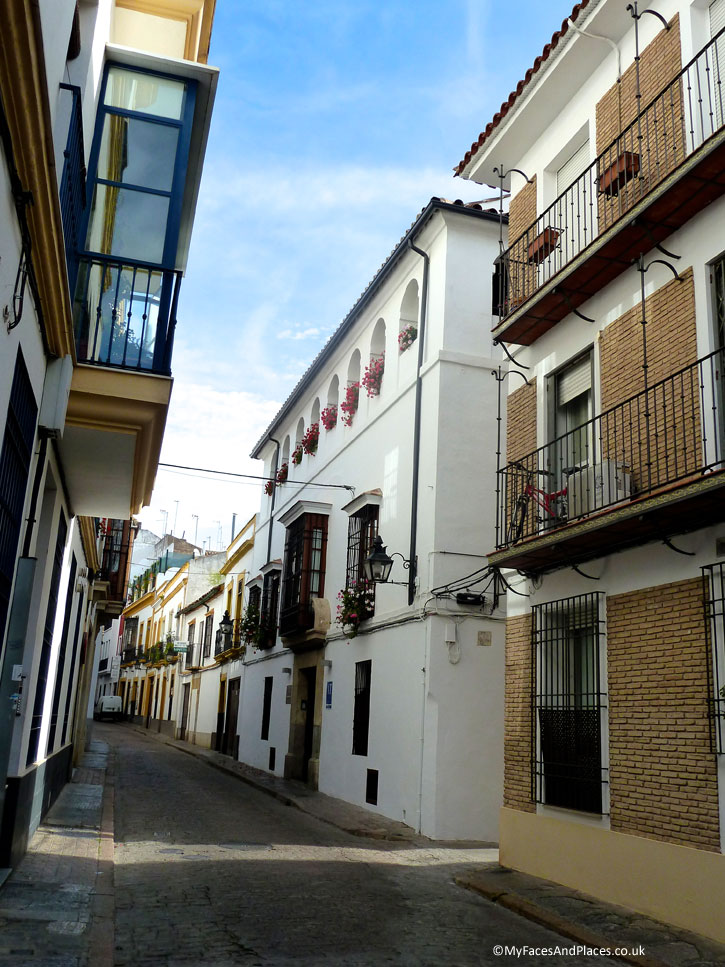 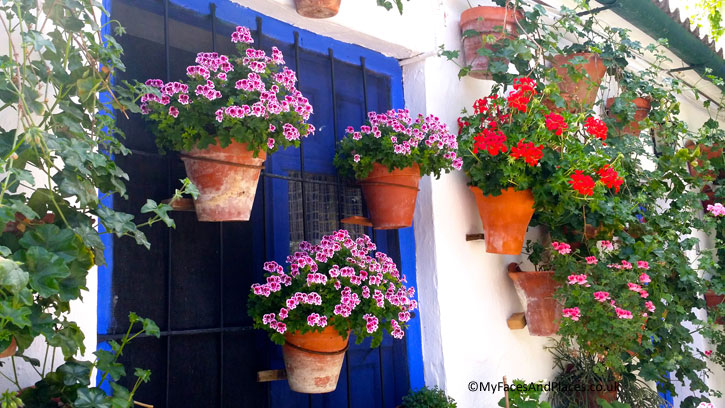 Flower power in the patio fiesta in Cordoba 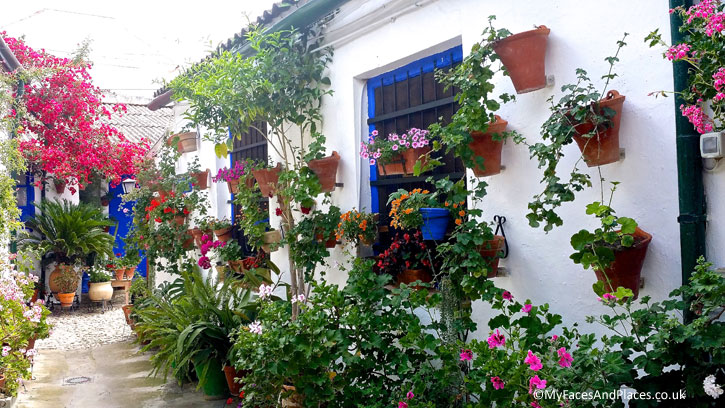 More flower power in the patio fiesta in Cordoba

Every year in May, the Cordobans unleashed their gardening skill by inviting the public into their private courtyards to admire their stunning patios festooned with flowers of all colours and shapes.  Whitewashed walls are clad with small clay pots dripping with trailing geraniums while bougainvillea in showy red and pink exploded into bloom along with other Mediterranean flowers. Rosa took us to a private home for a special preview and it was a floral heaven of the highest order. The floral adventure continued when we visited the Viana Palace, a 15th century stately home of a line of noble families who created twelve exquisite courtyards landscaped in typical Cordoban style bursting with blooms, fountains and orange and lemon trees. A pure horticultural delight!

We paid a fleeting visit to the Alcazar of Cordoba built by Alfonso XI in the 14th century as a fortress and palace on the remains of Roman and Moorish ruins. It was also the headquarters of the infamous Spanish Inquisition. The terraced garden landscaped in a Mudejar style is a joy to stroll in with its array of plants, flowers and topiaries. The main feature is a rectangular pool with fountains that runs the length of the gardens adding a tranquil air to the place. Cordoba is steeped in history and a stroll through its ancient narrow streets, city squares and the fascinating Jewish Quarters reveal the splendour of its past as the thriving capital of the Arab Caliphate. 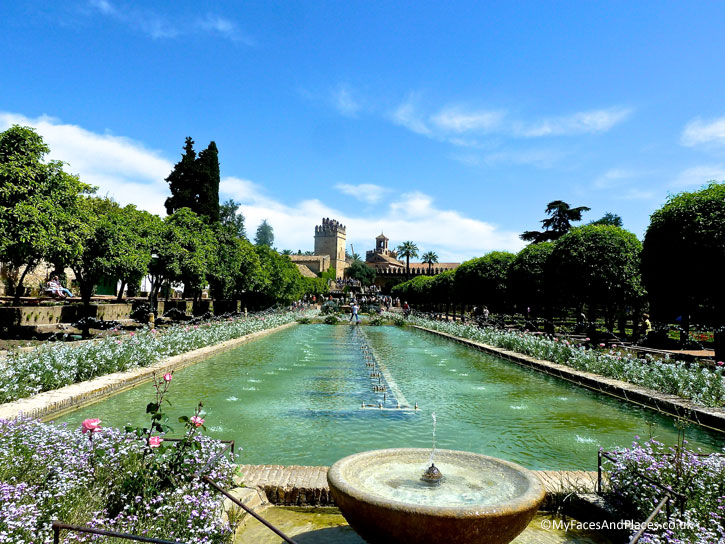 The beautiful garden of the Alcazar of Cordoba 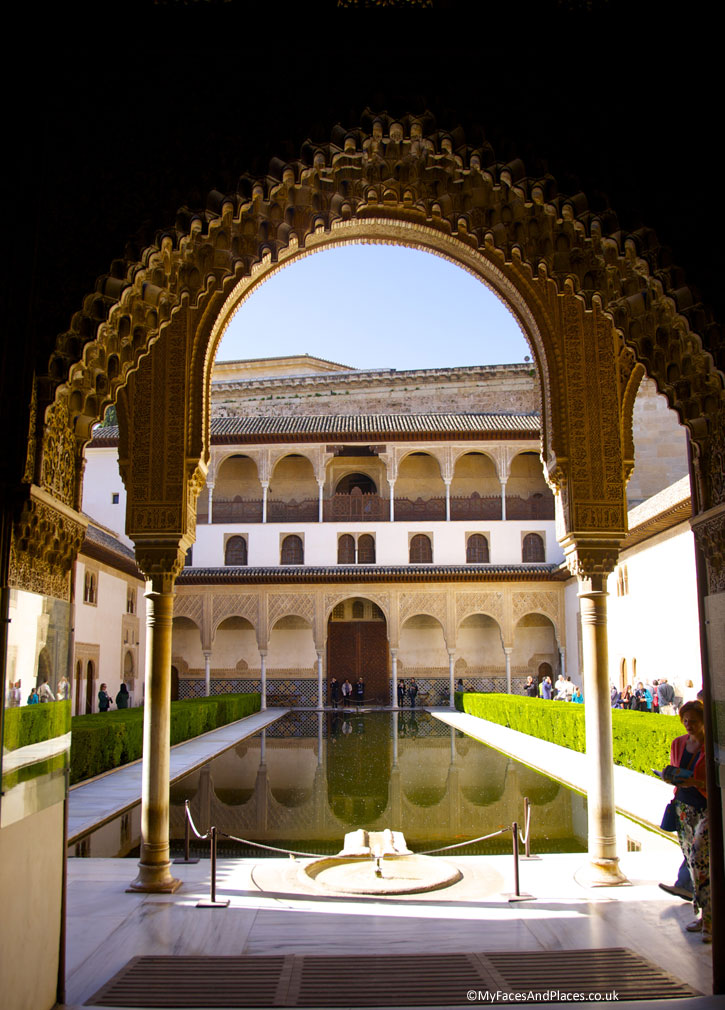 The reflecting pool at the Alhambra

Granada like Cordoba is another important Moorish city. It is situated between two hills at the foot of Sierra Nevada with the River Darro flowing through the city centre dividing the hills of Sacramonte, Albaycin and the Alhambra. It was the last stronghold of the Muslim rule before they were defeated by King Ferdinand II completing the Reconquest of Andalusia in 1492.  The Alhambra, a UNESCO listed monument is the emblem of the city. Perched high on a plateau lording over the city, it was a micro city in its own right with a castle, fortress, royal palaces and a town. Built between the 13th and 14th century, it was the crown jewel of the Emirate of Granada in the reign of the Nasrid dynasty following construction of earlier rulers. Subsequent Christian kings added and renovated the fortress. 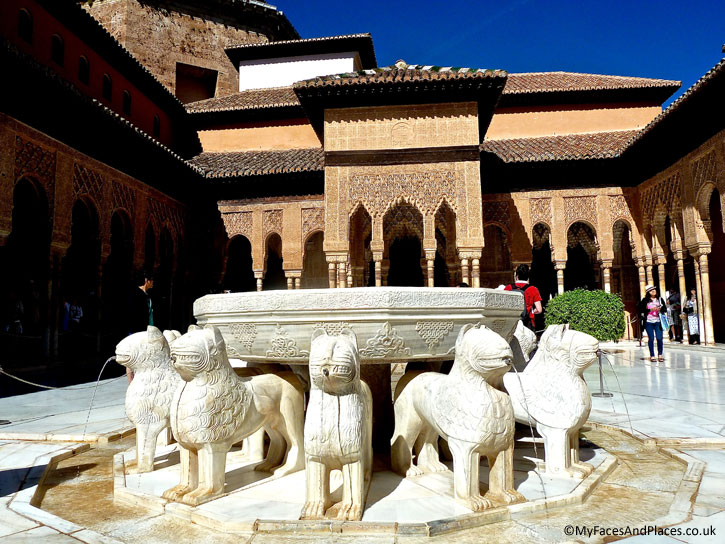 The massive complex is made up of a series of halls with exquisite Arabesque art and carvings crafted by skilled artisans along with splendid courtyards and water features reflecting the lavish and extravagant lifestyle of the Muslim rulers. Walking through the many rooms, I could almost hear the echoes of the past of the women giggling in the harem quarters and the men engaging in political intrigues. Among the many magnificent rooms and courtyards is the Court of Lions and Fountains. Surrounded by 124 white marble columns stands an alabaster basin held up by 12 marble lion statues representing the 12 Zodiac signs and at each hour, a lion will spout water from its mouth, an incredible feat of engineering for its time. It was built to symbolise strength, power and sovereignty of the rulers. 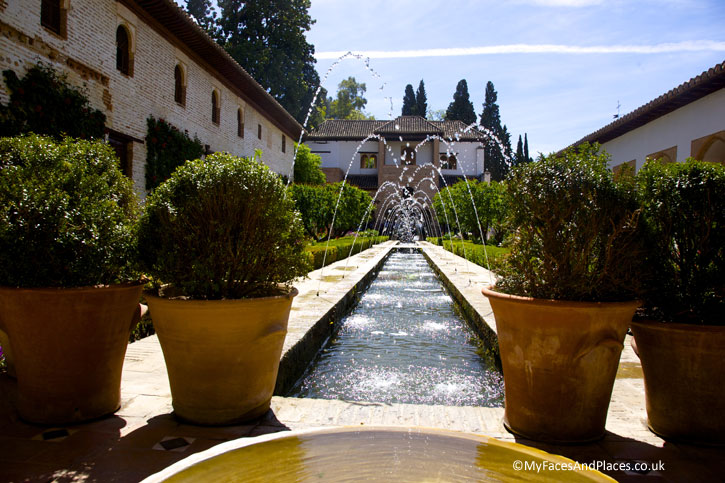 The lovely Generalife Gardens of Architect

Adjacent to the Alhambra is the Generalife or Gardens of Architect with villas built in the 14th century. It is a series of gardens beautifully landscaped with fountains, myrtle hedges, lavender, geranium, roses, peonies and various Mediterranean floras. The Muslim rulers and courtiers used it as a sanctuary and for relaxation when they wanted to seek solace away from the pressure of life in the palace. 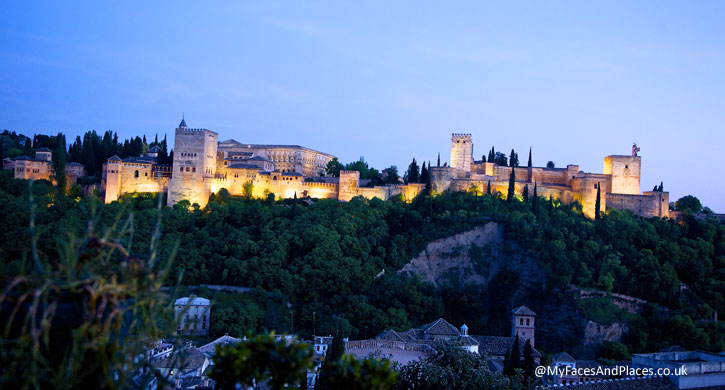 The splendour of the Alhambra in the evening

One evening we ascended the hill in the Albaycin quarter to the viewpoint of St Nicholas, with a huff and a puff up the steep gradient, to witness what was billed “as one of the most beautiful sunsets on earth” when the sun sets over the Alhambra and the city.  The romance of the sunset was shattered by the raucous large crowd with hippies peddling cheap trinkets while buskers strummed their guitars and sang loudly shattering the tranquillity of the place. We made a hasty retreat to a lovely restaurant nearby, the Carmen Mirador de Aixa and enjoyed the best sunset view over the Alhambra across the hill in peace and quiet while dining on the delicious food. As the golden glow of the sunset bathed over the Alhambra, it transported the fortress to the realm of magical enchantment. A poem etched on the rim of the basin in the Court of Lions sums up its beauty:

“Behold this mass of glistening pearl,

falling within a ring of frothing silver,

to flow amidst translucent gems

Dance of the Soul 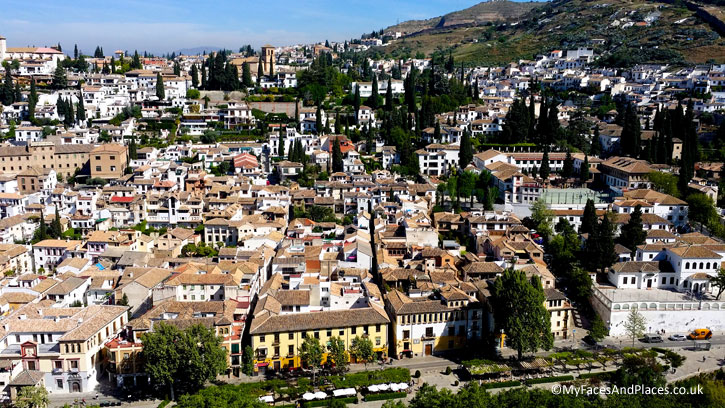 Aerial view of the town of Granada

In Spain, there is a word called “Duende” which means having a soul in a heightened state of emotion and expression often used in connection with the fiery dance of flamenco.  We went on an excursion to the hills of Sacromonte, famed for its Romany gypsy community who live in cave dwellings hewn out of rocks on the hillside. Some of the whitewashed caves today are converted into restaurants with flamenco dancing performed by the local gypsies. In the cosy cavern, as we dined, the flamenco dancers strutted their stuff tapping their feet to the lively rhythm of the guitar accompanied by a singer singing his heart out. The female dancers swirled and gyrated like being possessed, their faces contorted with emotive expressions as their feet tapped away like they were on fire.  Flamenco is tap-dancing with attitude! We sat entranced by their heart-thumping dance moves as they unleashed their ‘duende” and captivated the audience. I felt exhausted just watching them danced, carried away by the passion of their souls.

It was a fitting end to our Spanish odyssey and we left Andalusia with fond memories that would last us a lifetime. The enchanting land of opulent palaces and fortresses, magnificent cathedrals and the glorious gardens will linger in our hearts forever.

The Historic Centre of Cordoba and the Alhambra are listed as UNESCO World Heritage Sites.

For a bespoke tour of Andalusia, contact Rosa Lara at Just Explore