Our drive from Bikaner to Shekhawat was long and hot, and travelling with a driver who believed that both sides of the road belonged to him, meant that by the time we reached our hotel in the Village of Churi Ajitghar we were tired and on edge. It was two in the afternoon and there was not a sound or a soul in sight. We looked at each other with concern, did we make the right call to stay in this village in the middle of nowhere? Did anyone even live here? Where were all the grand Shekhawati Havelis we were promised? All we could see were dusty streets and a few homes that had clearly seen better days.

But as we climbed the few steps up to our Haveli and through the massive wooden gates, we are showered in welcoming flowers and all of those feelings melted away. The courtyard we enter is sunlit and airy and every wall is covered in frescos small and large, in beautiful colours. Ahead is a massive arched gateway with floral designs, inlaid with pieces of Belgian glass mirror, that shine like little gems in the mid afternoon sun. Paintings of trees, birds, and scenes from daily life are everywhere. There is so much detail, that it is difficult to take it all in at once and we sit down and stare in wonder, our earlier apprehensions forgotten. 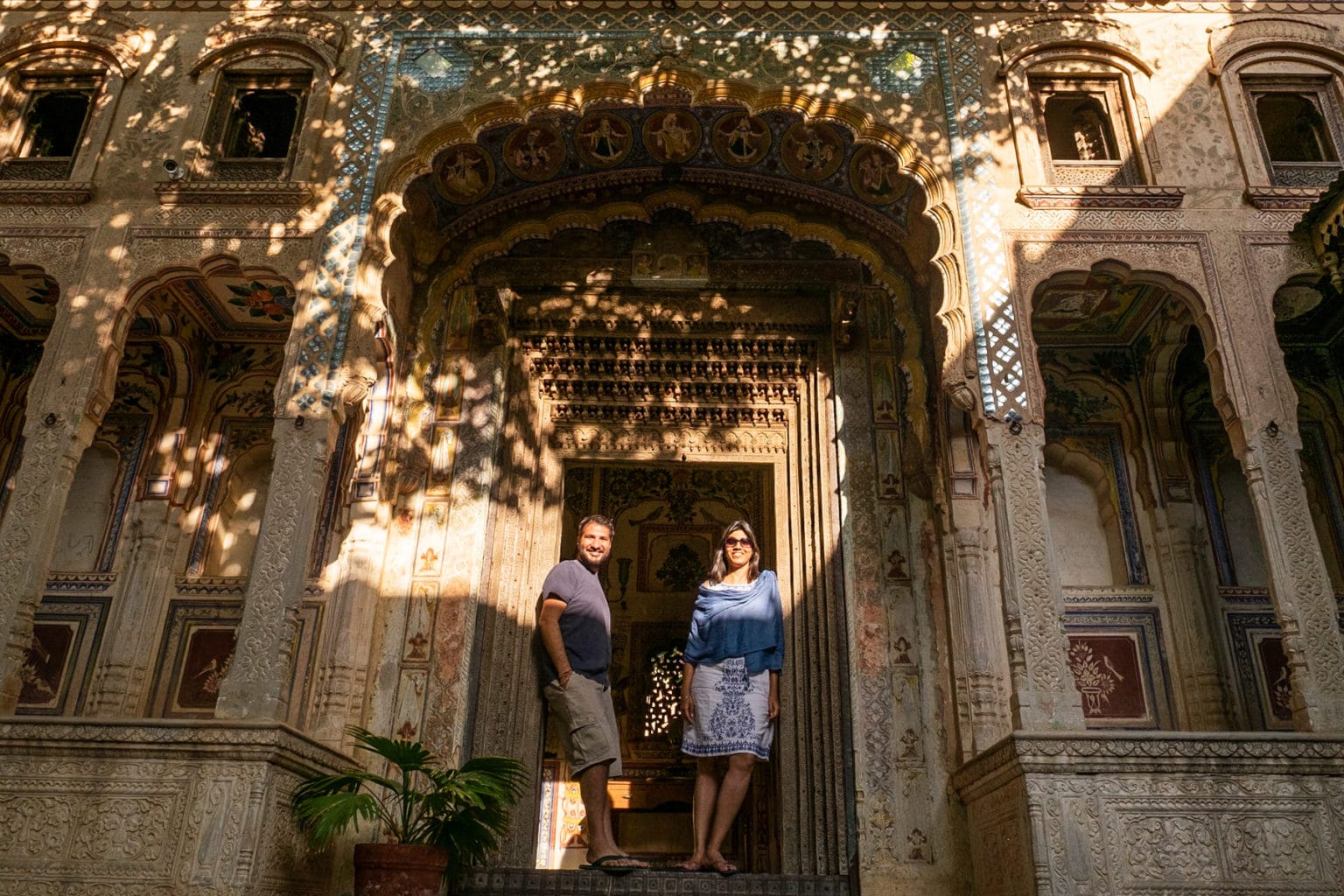 The outer courtyard at the Vivaana Culture Hotel in Churi Ajitghar

We are in Shekhawat, to see the region’s frescoed havelis, which have been quietly drawing tourists for years, through by Rajasthani standards, remain well off the tourist trail. Our interest in the havelis had been piqued by an article we had stumbled upon in a travel magazine and for us it was to be one of the highlights of our Rajasthan journey. Excited as we were to finally be here we were hungry and exhausted and so a big meal of Laal Maas later we were happily snoozing in our very beautifully decorated room!

That evening we set out with Simmons the manager, a short portly man, dressed from head to toe in black, who couldn’t have been more out of place in rural Rajasthan, to explore Churi Ajitghar. With food in our belly and the soft evening sun, the village which earlier in the day had seemed distinctly unwelcoming, was considerably more agreeable. The birds were out, kids were playing volleyball and villagers chat animatedly on street corners. 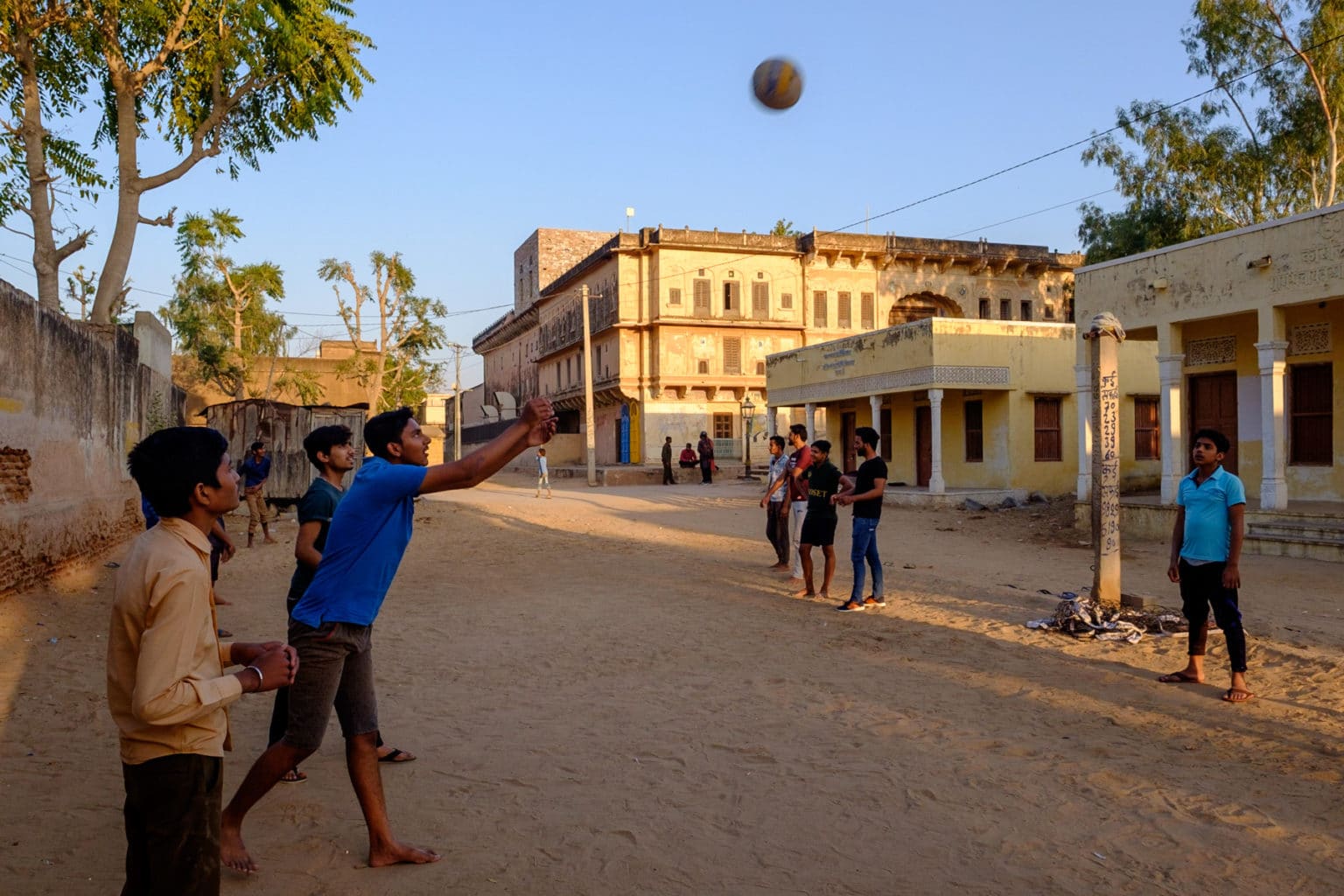 Evening games at Churi Ajitghar, the Haveli we stayed at is in the background.

Simmons appears to know everyone in the village and waves enthusiastically at everyone who return his greeting, albeit with slightly confused nods. Churi Ajitghar gets its name from an interesting story says Simmons. Centuries ago, the women of the village had an altercation with the women of a nearby settlement leading to a ban on them drawing water from the well. Incensed the women returned to their own village and gave their husbands an ultimatum. They were to have their own well or else the husbands would have to wear bangles. Whether it was due to a lack of water in the region of the laziness of the said husbands, the well never came to be and since then Ajitghar came to be known as Churi (bangle) Ajitghar!

As we walk through the village roads, Simons points out old havelis and peppers us with anecdotes. One house had a 100 rooms, while the other had just sold for 3 crores, and yet another was captured by the caretaker. However, most were shut and dilapidated, and we are unable to enter them to check out the paintings. No worries, says Simmons, tomorrow you can visit Nawalghar, Mandawa and Fatehpur, I promise you by the time you are back you would have had your fill of mansions and paintings. 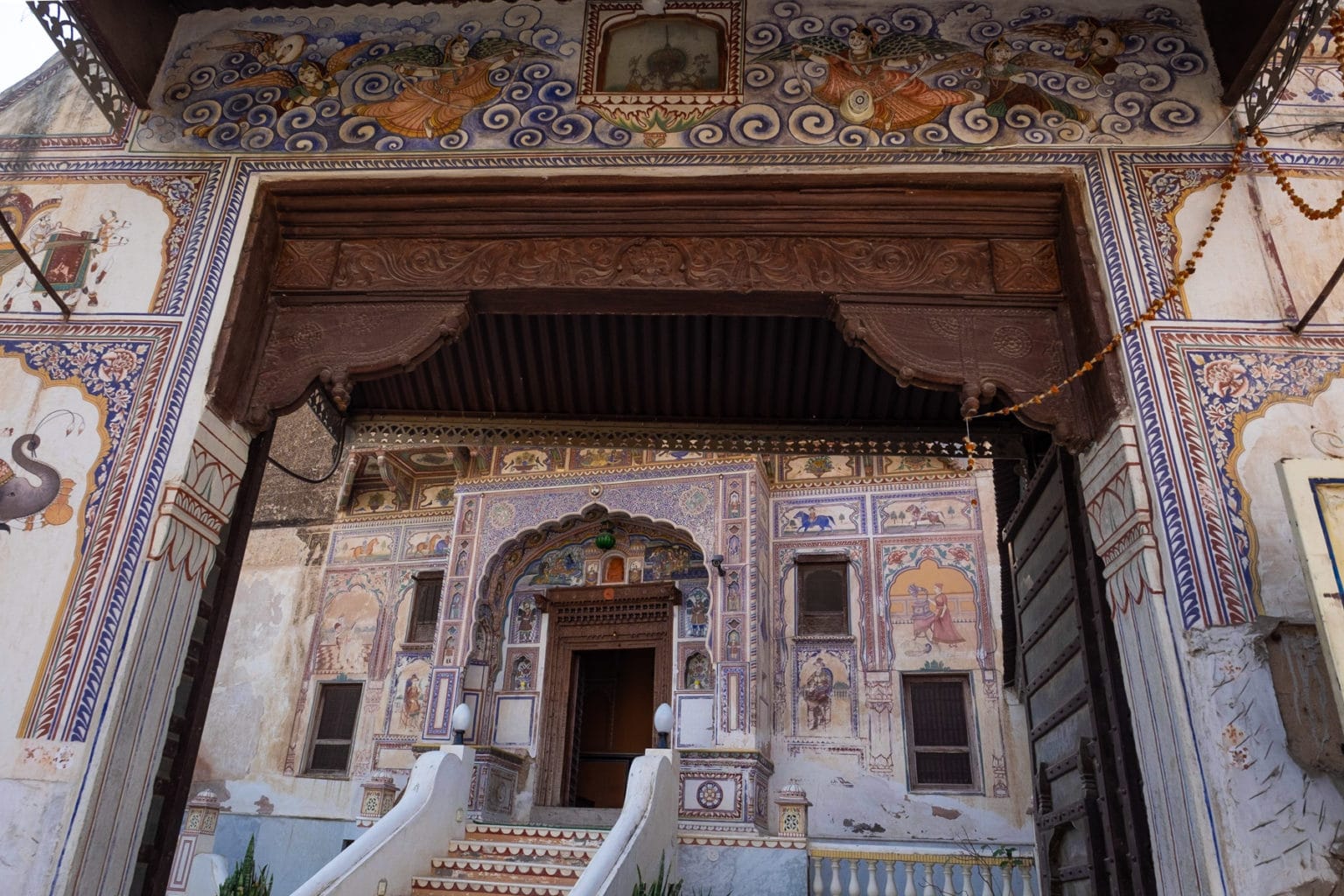 A Haveli in Mandawa, which is now restored as a heritage hotel.

And so the next morning we set out, brimming with that familiar excitement that comes when we are about to embark on a new discovery. By some estimates there are about 2000 painted havelis in Shekhawat, though most lie locked and abandoned, their owners having migrated from the village to seek better opportunities. In a way Shekhawat’s story is similar to that of Bikaner. Falling along the silk route meant that the Shekhawat region attracted traders who set up home in the region that reflected their prosperity. Whilst the Rajputs rulers built themselves forts, the traders, colloquially called ‘baniyas’ or ‘seth’, built themselves palatial homes. The houses needed to reflect the wealth and status of the owner which meant that they were not only large, but also beautifully designed with jharokas, carvings and other elements. However, the rich merchants faced a problem, the local stone quarried in Shekhawat was too soft to carve unlike the red sandstone of nearby Bikaner. For the tenacious Marwari businessmen however this was hardly an obstacle! The ‘seths’ hit upon a unique solution, if the havelis could not be carved, they would be adorned with frescos!

Whilst it is not clear how and where the local artisans of the region learned the complex techniques behind preparing frescos, there is a theory that the art found its way through ships from Europe, a theory that seems to be credible. However, it is clear that the both the haveli owners and artisans embraced this new form of expression wholeheartedly and the moniker of the region being an open air art gallery is not misplaced. 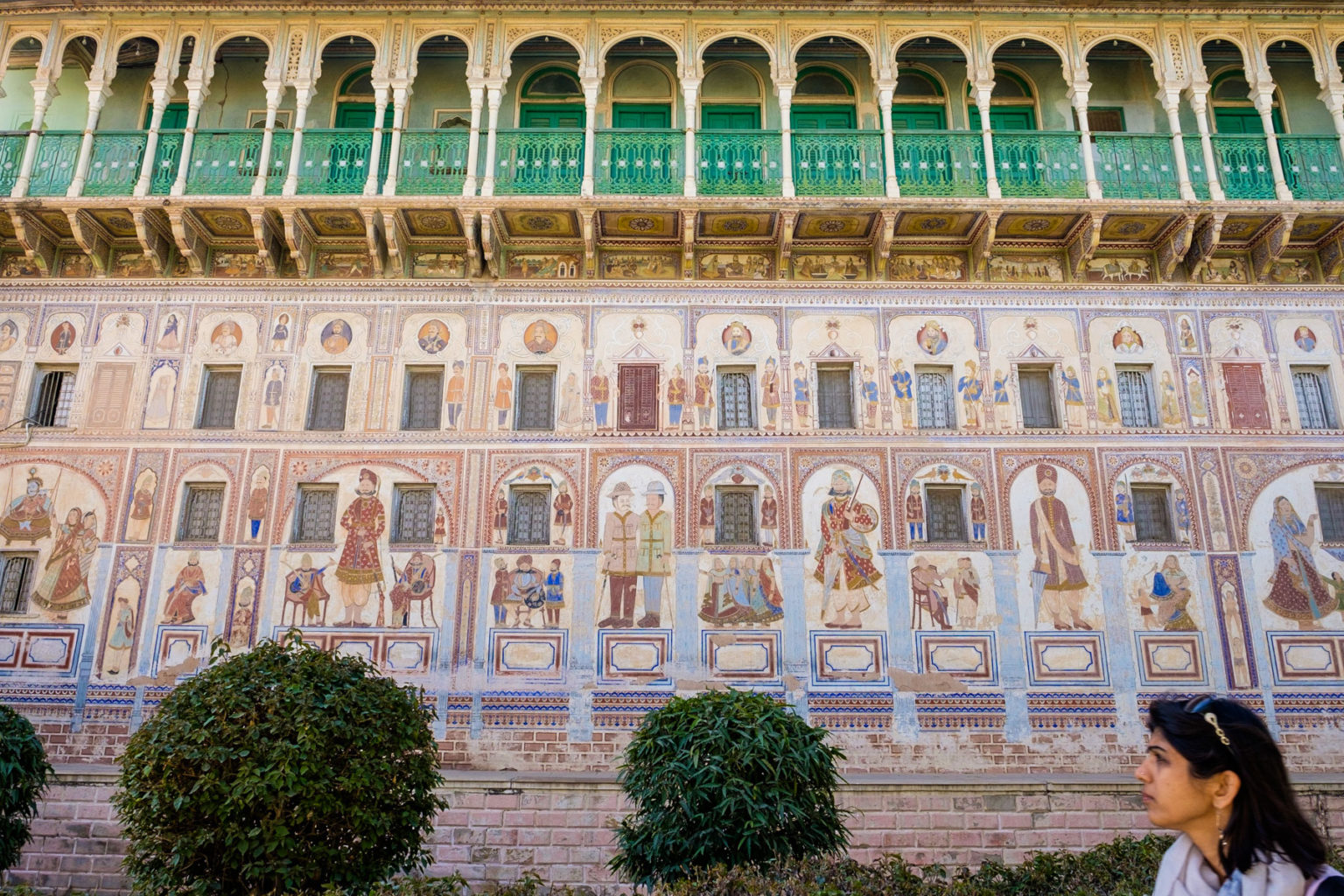 A section of the outer wall of Podar Haveli, now a museum.

We reached Nawalghar and head straight to the Podar Haveli, one of the best kept homes in the region which has recently been converted into a museum. Now if the heritage haveli we were staying at Churi Ajitghar seemed to have paintings everywhere, the Podar Haveli had taken it to the next level. With hundreds of frescos, of all kinds, painted on the inner and outer walls, on doorways and in rooms, and even under the awnings, the mansion was a canvas. There were all sorts of paintings from men and women riding horses and locked in battle, scenes from Radha and Krishna’s love story, British ladies with weirdly low cut blouses, Maharajas with impressive moustaches, women suckling babies and even images of the King! 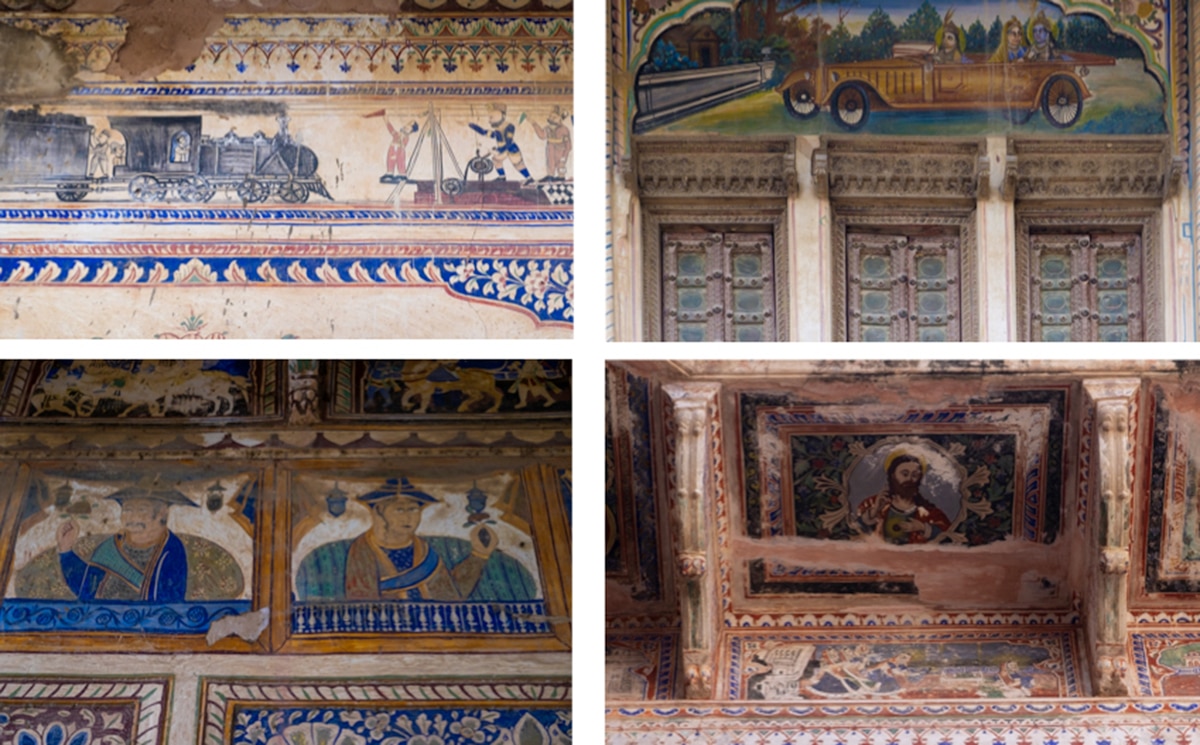 Top Left: The railways reached Frescos on the Shekhawati Havelis, decades before they actually reached Rajasthan! Top Right: The gods travel around in vintage cars! Bottom Left: A little bit of the Orient in Rajasthan. Bottom Right: Jesus we here too!

We couldn’t help but gape! For all out travels around India and the world we have never seen homes like this. We think back to our journey around Rajasthan and all that we had experienced. The beautiful palaces of Udaipur, the forts of Jodhpur and Chittor and the havelis of Bikaner, but nothing compared to this. What positively boggles the mind is how every inch of available space had been coloured, with a sheer variety of subjects from the serious to the quirky. What skill and patience it would have taken to create all this and how amazing that despite all the years these frescos, done in natural colours, have stood the test of time in a most unforgiving climate. 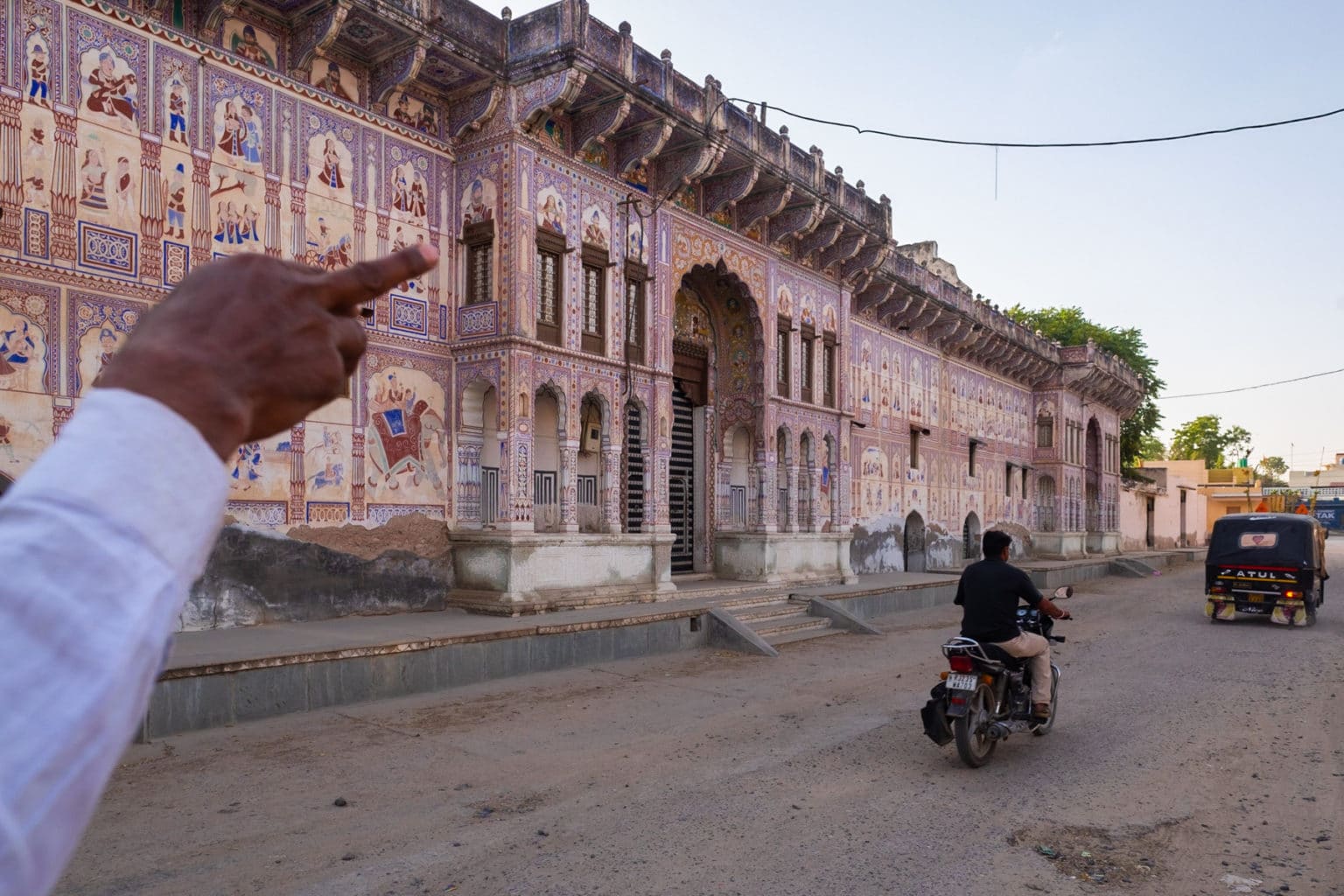 The Piramal Haveli in Fatehpur spans an entire block!

Over the next couple of days, we travelled to villages all around Shekhawat, from Nawalghar to Ramghar, Fatehpur, Mandawa and Churu. Each of the villages had scores of frescoed havelis and whilst a number of the paintings were similar, each one has its own unique style and flavour. If Fatehpur had some of the most magnificent havelis, Ramghar had beautiful Chattris with fresco adorned domes that tell the story of the Ramayana, and Mahansar had the famous Sone Chandi ki Dukan, a house with an inner courtyard done up in real gold! There were also memorable paintings: a mural of Christ in one house, another that had a beautiful illusion that was a cow from one angle and an elephant from another, and even one house that depicted trains and stations, painted well before the rail came to Rajasthan! 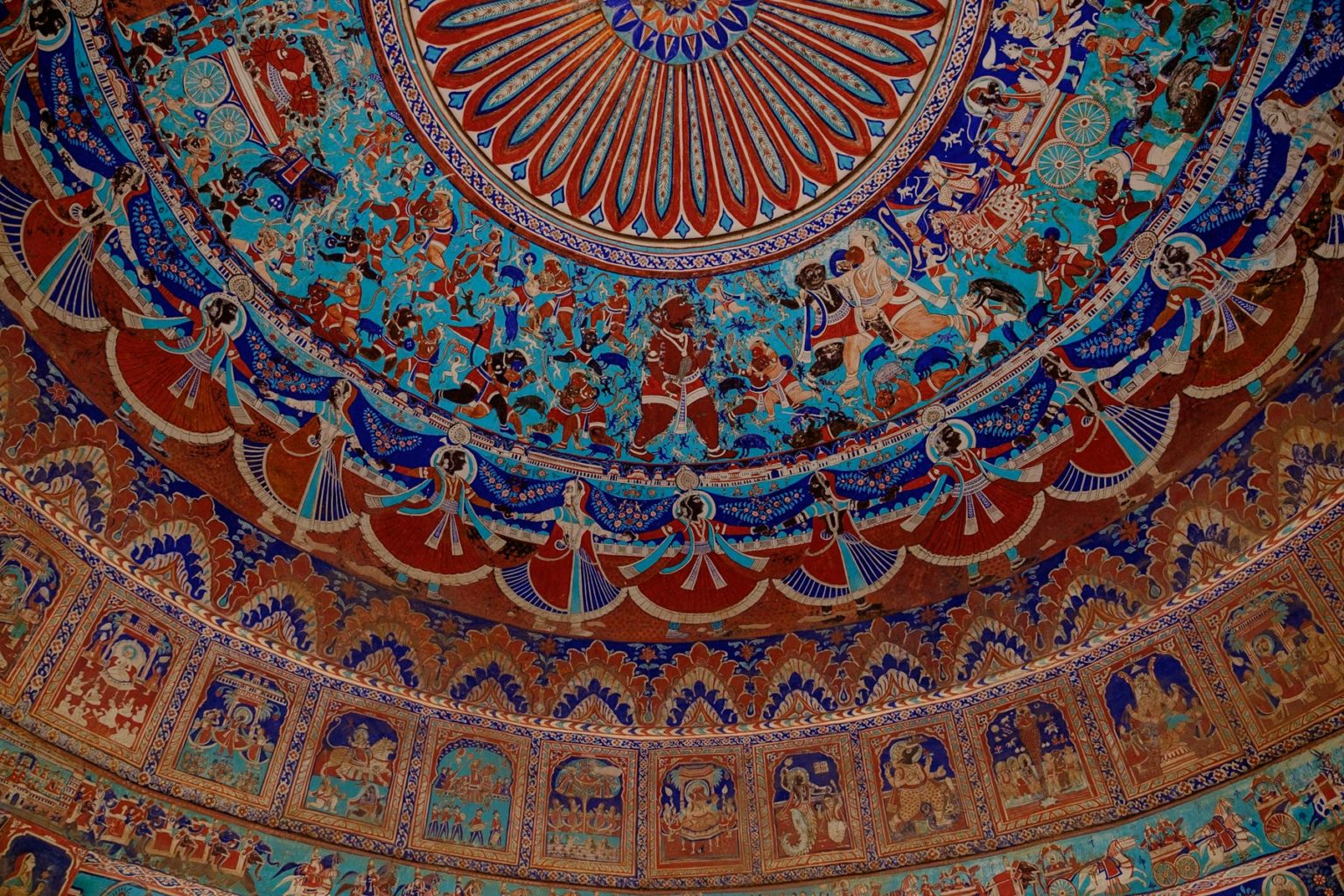 The roof of the Ramayan Chattri in Ramghar is absolutely breathtaking.

Our favourite however we stumbled upon, when we were invited into one of the few inhabited havelis, whilst randomly roaming around Fatehpur. The lady of the house seeing our interest in the frescos, pointed out one that we had not seen anywhere before –  a painting of a group of gods travelling in a swanky modern car! Clearly the creativity of the Shekhawati artists knew no bounds! 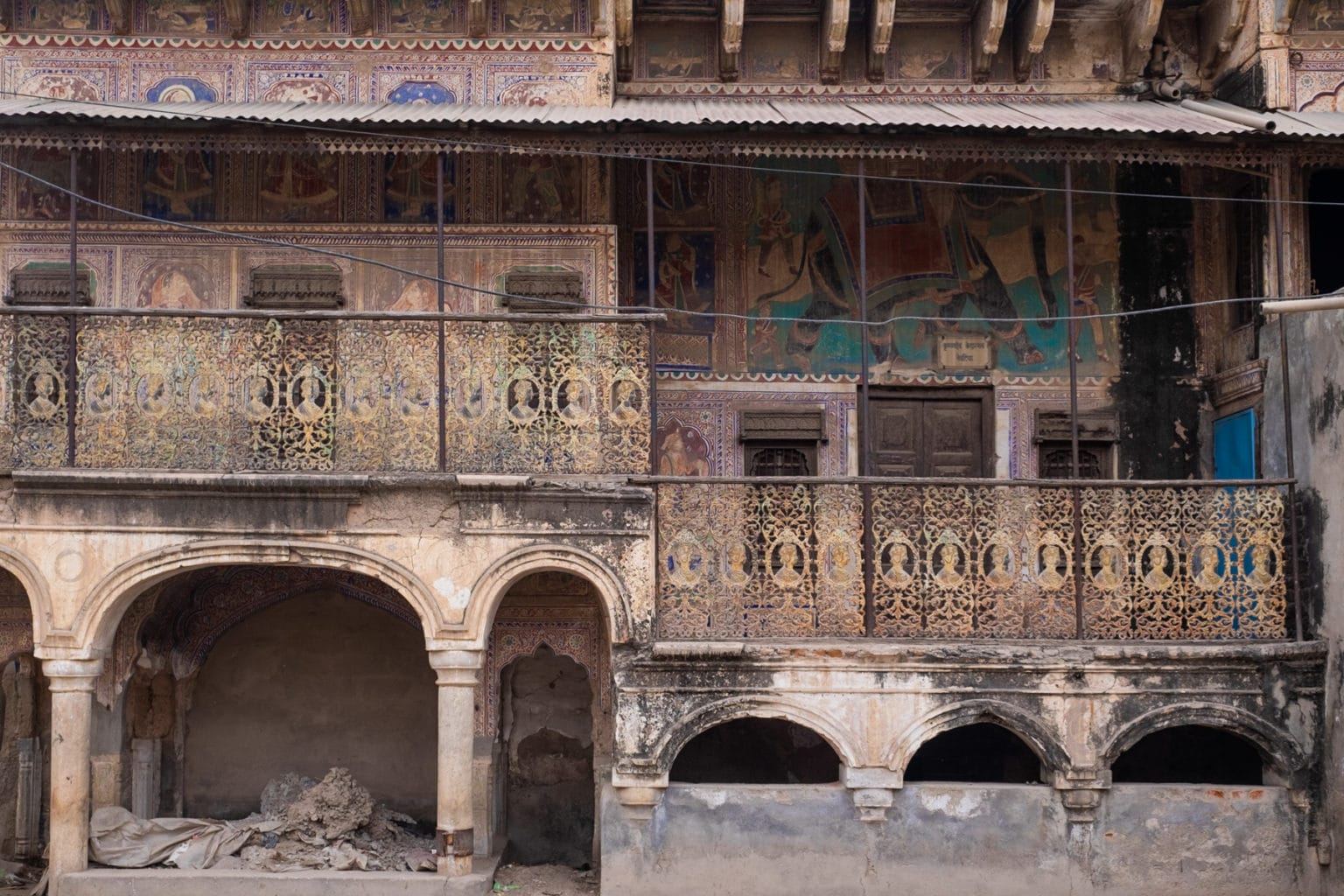 Most of Shekhawats Havelis are in a dilapidated condition, falling apart due to lack of use and maintenance as families migrated en-masse over the years.

As we sat in the courtyard in our haveli, carefully restored and converted into a hotel, under a canopy of stars, the silence only broken by the distant melancholy sounds of a folk singer and his sarangi, we couldn’t help but feel a little sad ourselves. For every well-kept haveli there were 50 that were slowly crumbling from decades of apathy and neglect. And whilst in recent years there have been renewed efforts to conserve and restore what remains of Shekhawat’s famed frescoes, it will take some real will and effort from everyone to ensure that these treasures of our collective past are not lost forever. But had seen immense beauty over the last couple of days, and had decided to move to another village and extend our time in the region by a few more days, some stories need to be told.

The post The stunning Frescos of Shekhawat’s crumbling Havelis appeared first on The reDiscovery Project.