We stared at the white arrow painted on the rock which sort of pointed to the middle of the fork. “I think we need to take the left fork”, I said, vaguely remembering what Ashok had told us. Hoshner and Cathy looked at me and shrugged. They were not sure and so we went left. We were trekking in the Bhagwan Mahaveer Wildlife Sanctuary looking for the Tambdi Surla Waterfall. Ashok, our host at the Dudhsagar Plantation had said the trek was easy and the waterfall a beautiful sight. We trudged on through thick foliage, tiny clear brooks gurgling over rocks and past wild dark green moss and flowers that have managed to survive the monsoons. 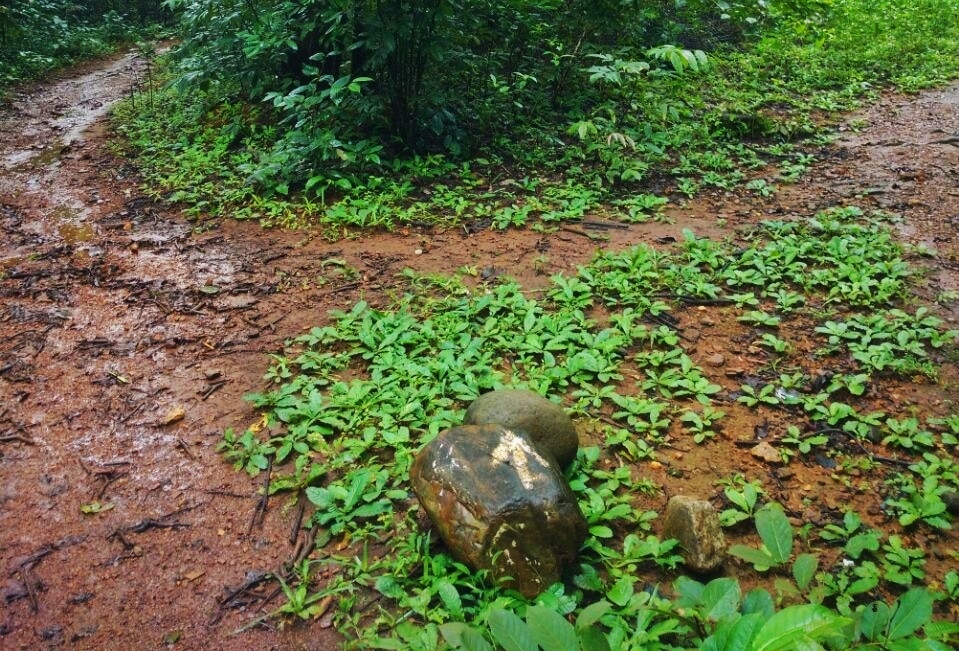 Left or Right? We took the road less travelled

We were at the base of the Anmod Ghat, which is like any other section of the Western Ghats, lush, green and stunning. Before starting our trek, we went to check out the 12th C Tambdi Surla Temple, the oldest one in Goa, not a usual tourist spot in a state known more for beaches and parties and its many Churches. It is said that this is the region where civilization first flourished in Goa all those centuries ago, a debatable fact like many other legends, but an interesting  story nonetheless. 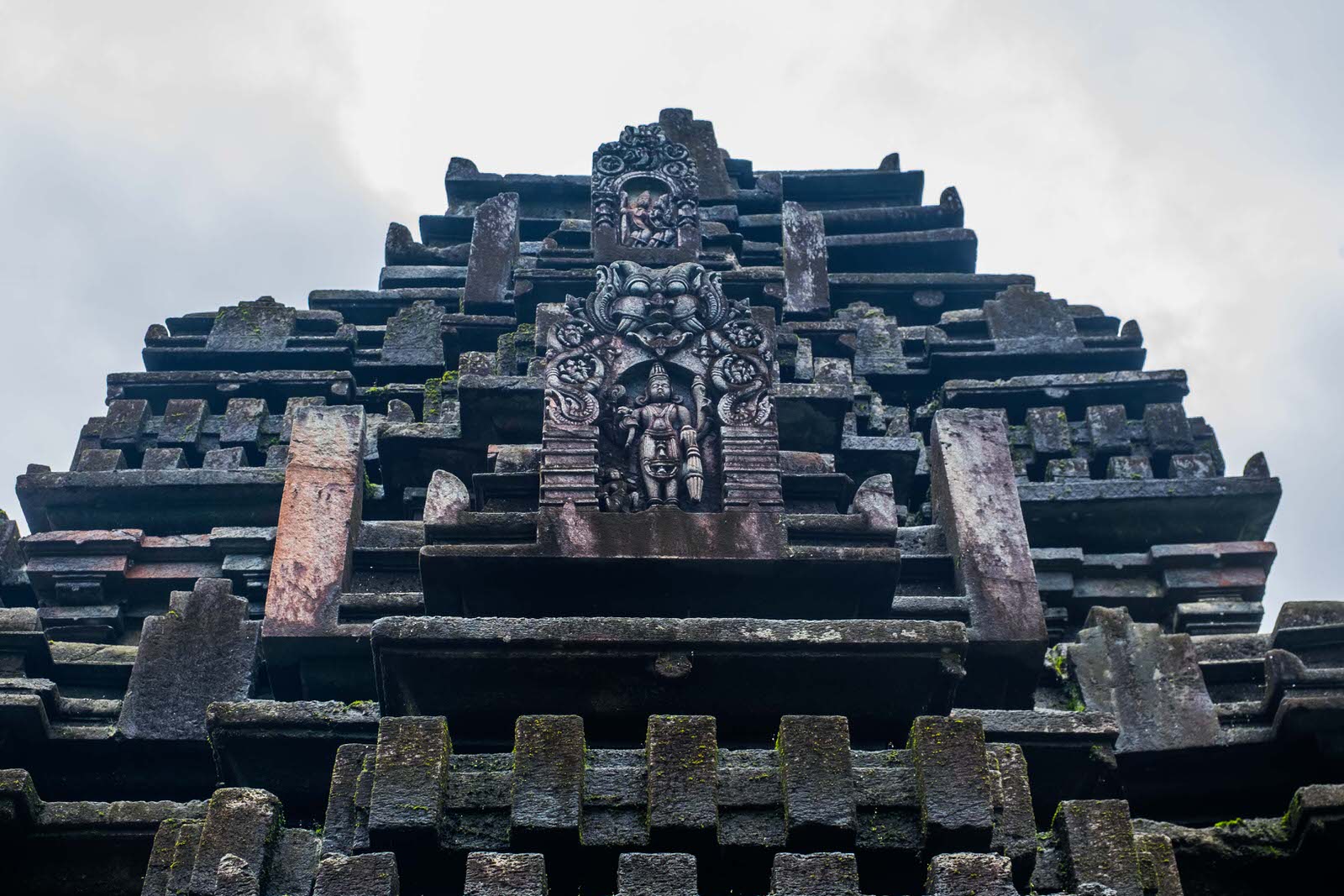 The 12th century Tamdi Surla Temple, the oldest in Goa, sits by the Surla River in Bhagwan Mahavir Wildlife Sanctuary.

The temple, built in the Jain style of architecture and influenced by Hoysala art resembled the ancient temples of Karnataka that we had seen, though nowhere near as intricate or detailed. It was also rather like the ones we had seen at the base of the Lonar Crater in Maharashtra, though the connection was unclear. While the temple itself is simple, with some Carvings and detailing on the inside and a pillared central hall, the surroundings are gorgeous. A protected monument the temple is surrounding by a well manicured lawn with the Surla River flowing on one side and the Ghats towering above on the other three sides. Shielded by the hills and hidden amongst the think forests, the temple, unlike some others in the state, has survived centuries of invasion and conversion. 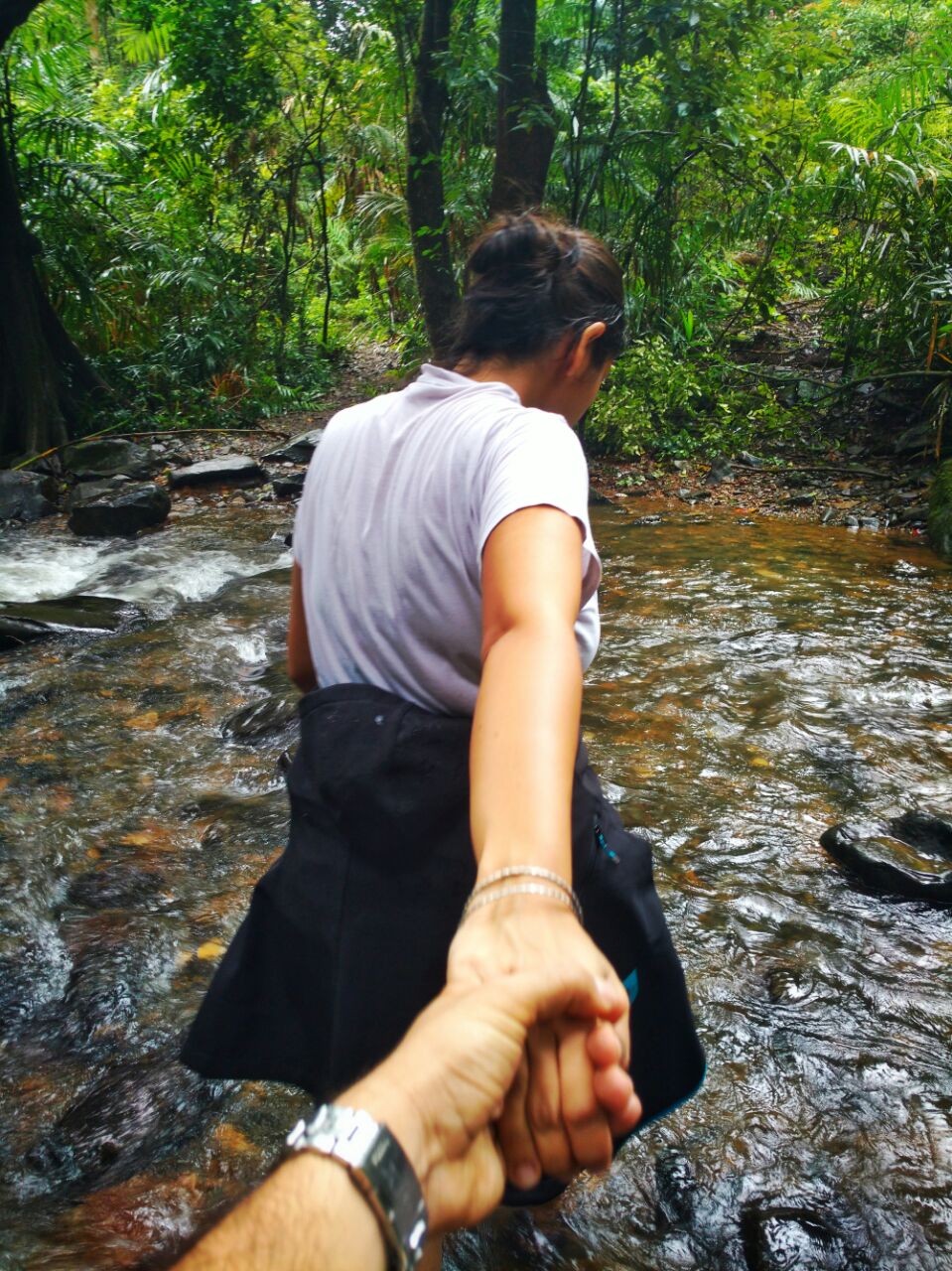 Channeling Murad Osmann  while trekking through the Bhagwan Mahaveer Sanctuary

From the temple we began our trek, past the ambiguous white arrow and into the forest. As Ashok had promised the trek was relatively easy as we went deeper into the forest in search of the waterfall. An hour and half later we started climbing and the trees seemed to be closing in on us letting in very little light and sun. Convinced that the elusive waterfall was just around every bend we soldiered on till suddenly the skies darkened and the rain came thick and fast. At this point, with no end in sight, the rain barreling down on us and our tummies beginning to rumble  we decided to turn back, the waterfall would have to wait another day. But it wasn’t a total loss, the trek itself had been beautiful. (We later discovered that we had probably taken a wrong turn along the way taking us on a less trodden path which would probably have taken us to the top of the hill!). An hour later we go back to the car park and headed out of the sanctuary to the plantation, after stuffing ourselves with massive rava fried prawns and chicken xacuti at a local eatery in Mollem. 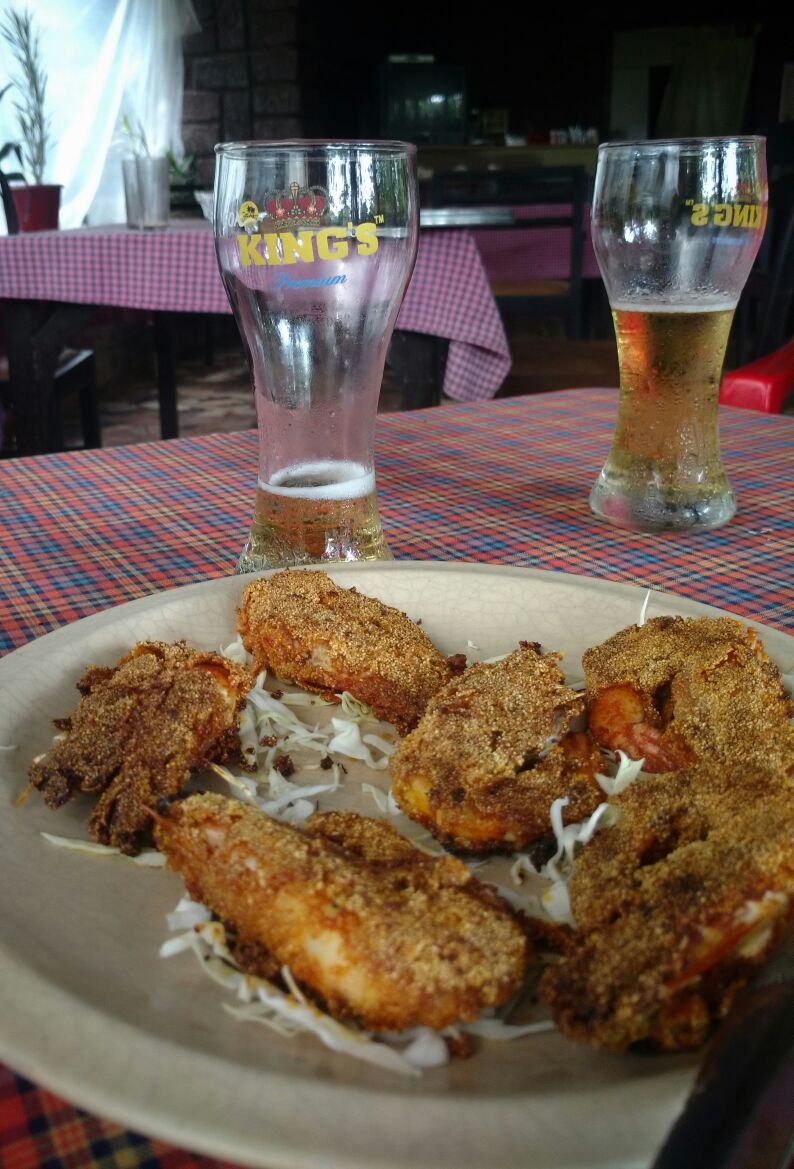 No waterfall but we assuaged our disappointment with Prawns and Beer!

Ashok’s parents had bought and started a cashew and spice plantation at the base of the hills in the village of Karmane, an hour south of where we were. The plantation itself is lovely with rows and rows of cashew groves, bananas, nutmeg, turmeric, peppers and other trees and shrubs. Ashok, an Indo-German, who manages the plantation, is also growing vegetables and other seasonal fruits, many that make their way into the simple homemade Goan food that is served at the plantation. Ashok is full of fun stories of life on a plantation, and his family that is rather like a mini UN (his sister married a local Goan, his brother a Russian and he an Indonesian). 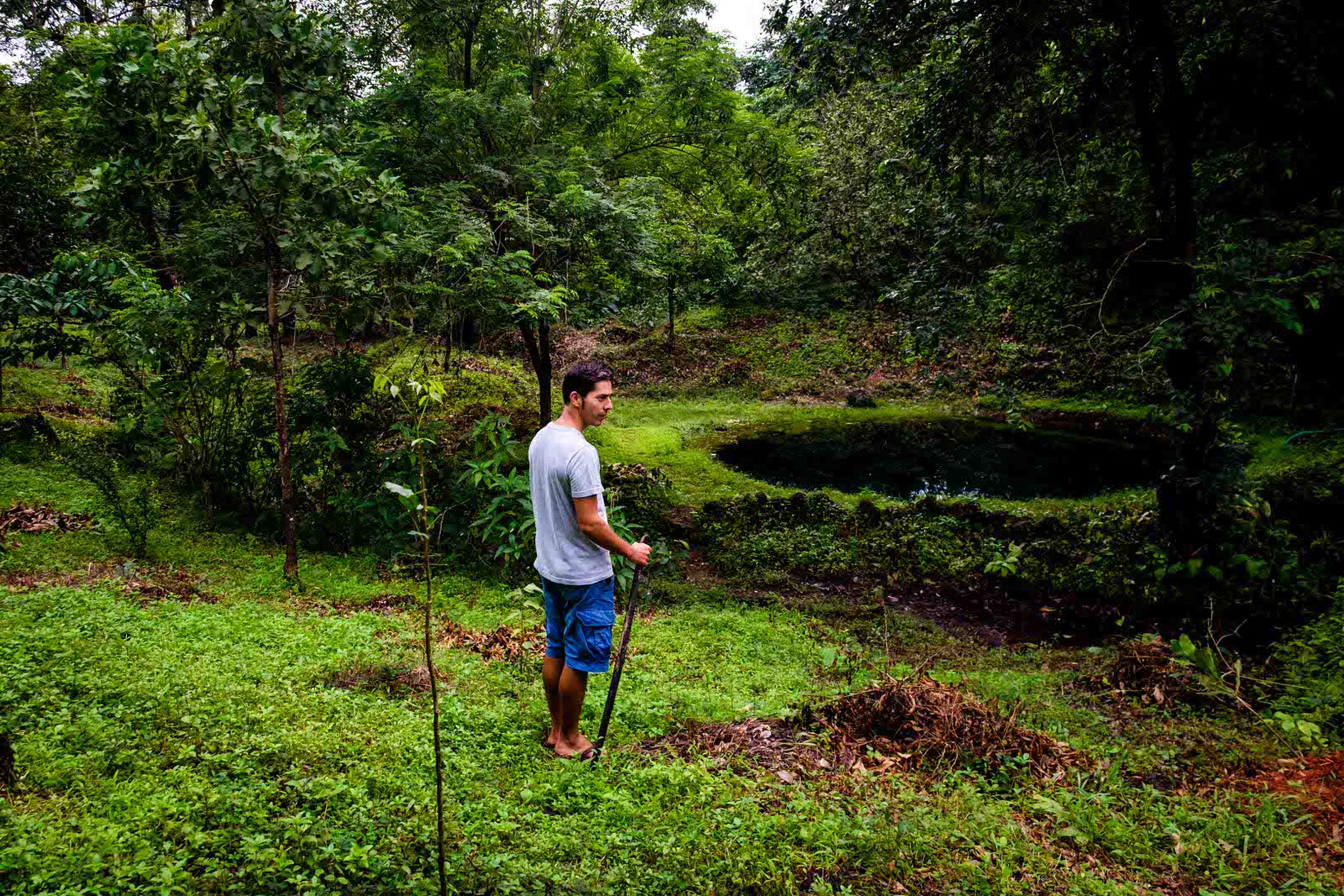 Ashok takes us around the plantation

While he has clearly marked out paths for those wishing to stroll through the plantation on their own, walking with him ensures that you understand the whole ecosystem of the estate. Here water comes from their own well and food is cooked using biogas made from the dung of their cows, which also give plenty of milk that he takes every morning to the local cooperative. Life here consists of long walks, jumping into the pool that is built on a slope overlooking the cashew trees, reading, birdwatching and drinking jungle juice made with homebrewed urak, lime and a dash of soda. 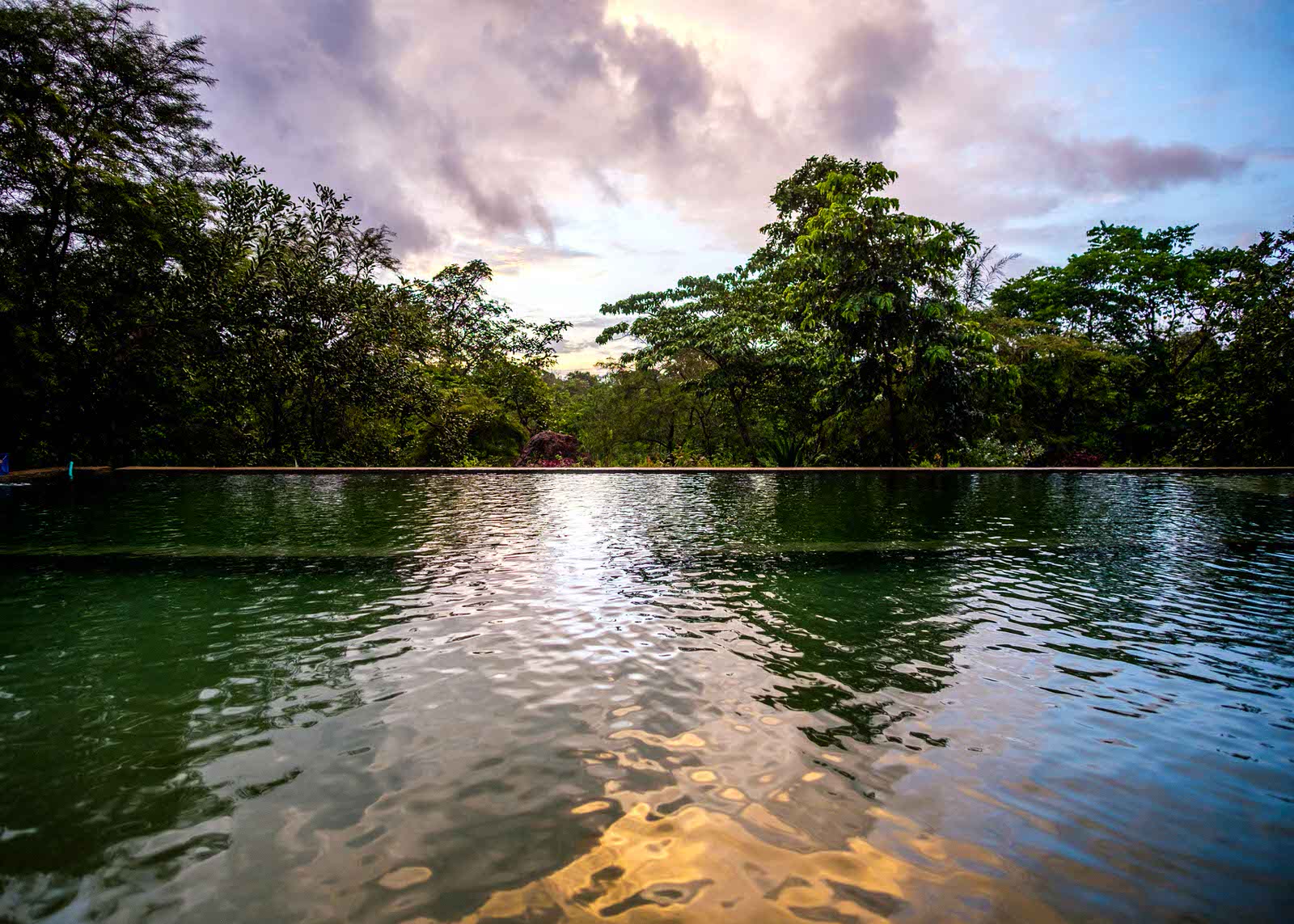 Fancy an infinity pool in the jungle anyone ?

Visiting a plantation is fast becoming a tourist destination in Goa and many so called plantations seem to have been set up for tourism purposes only (complete with captive elephants to ‘add’ to the experience) but Ashok’s place is the real deal, it’s his home more than anything else. 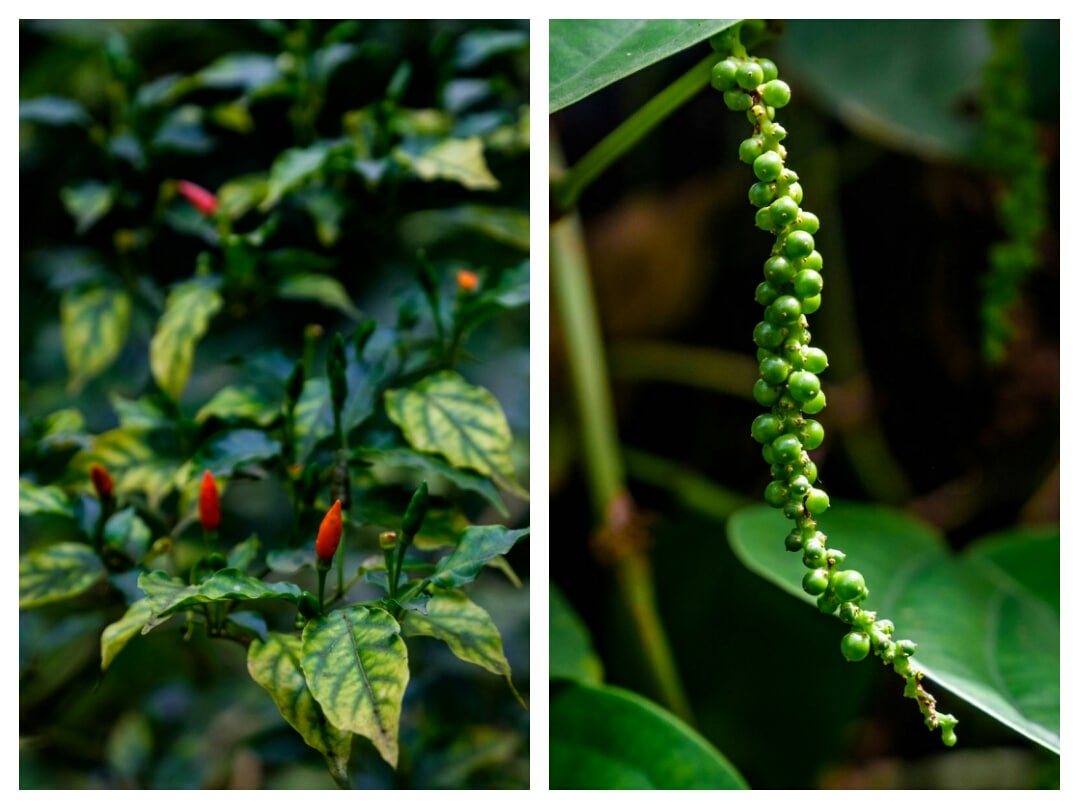 The next day we set off to see the Prehistoric Rock Carvings that are further south, past the famous Salaulim Dam in Usgalimal. Situated on the banks of the Kushavati river, these unusual rock carvings or petroglyphs belong to the Upper Paleolithic era and are apparently over 30,000 years, similar in style and time period to the rock paintings we had seen outside of Bhopal. Here the carvings were along the banks of the river on the laterite stone and include images of animals, labyrinths and other figures. The animals and what is possible a huge oculus or labyrinth was easy to tell (perhaps a map of a real labyrinth), but some others were weird and hard to figure out what they might have been. The carvings were discovered in the early 1990s and while this is a tourist spot and protected zone very little information is known about these carvings, where some accounts date them to a different era about 10,000 years BC. A post on our Facebook page about these carvings resulted in a lively discussion on whether these carvings has any relation to similar ones some of our readers had seen in Peru and Scandinavia ! 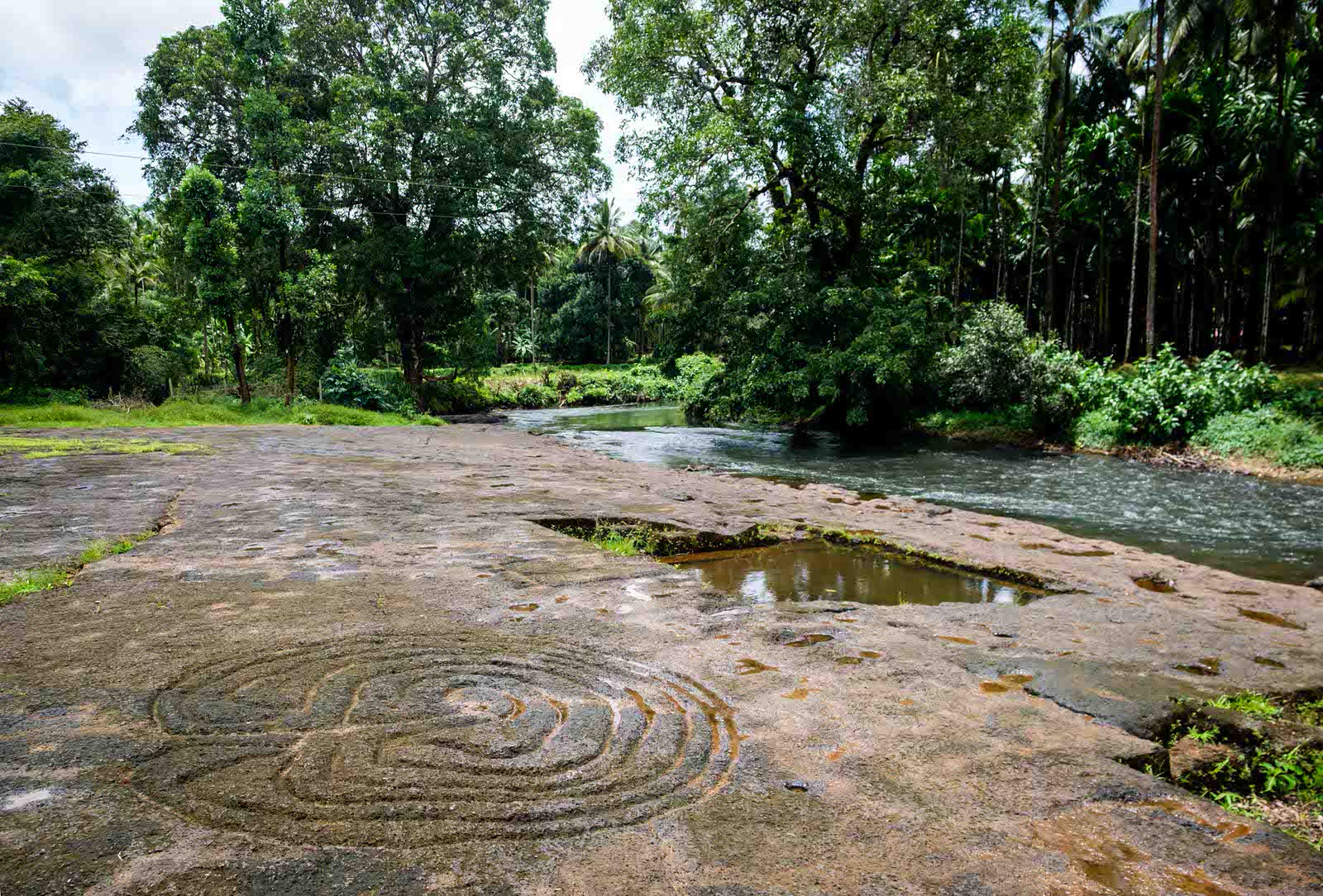 Prehistoric rock carvings on the banks of the Kushavati at Usgalimal

Our time spent on the Dudhsagar plantation also gave us an insight to life on a farm and the delicate balancing act between living a sustainable lifestyle and making it commercially viable to do so. One of our dreams is to eventually settle somewhere outside the hustle bustle of the city, own our own little patch of land, build a home, grow a few vegetables and perhaps run a little homestay and restaurant, and every one of these homes and farms we visit whether in the interiors of Punjab or the jungles of Madhya Pradesh or indeed here in Dudhsagar helps us add a little bit to the puzzle, if for now only in our heads. 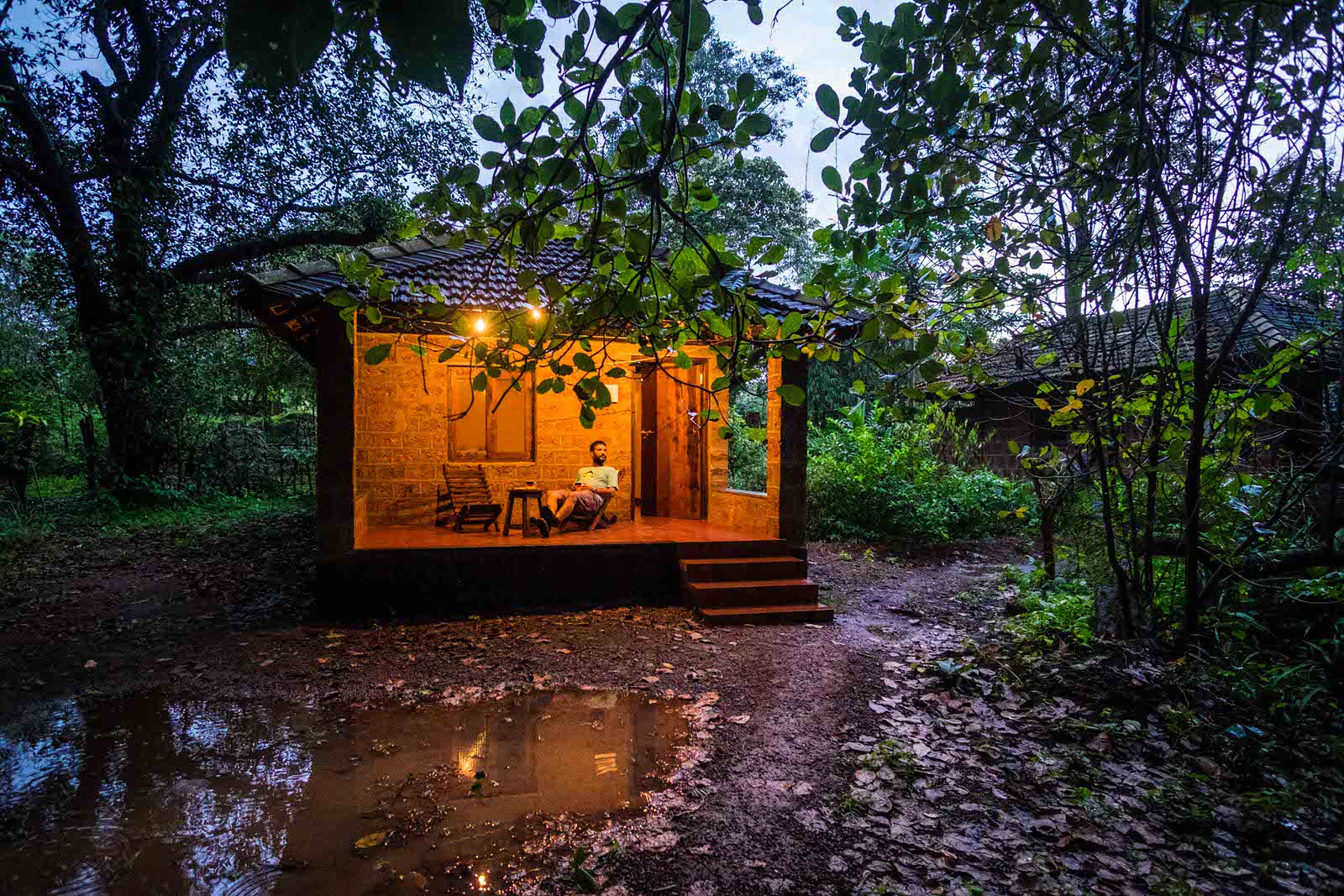 Our lovely little cottage set amongst the forests of Dudhsagar Plantation

Where to Stay: The Dudhsagar plantation is located in Karmane village about an hour and a half from Panaji at the edge of the Mollem Wildlife Sanctuary. Make that your base for visiting the region. It’s an excellent place to spend a few days unwinding and reading, walking around the plantation and birdwatching all the whilst surrounded by the sounds of the forest. Bear in mind that the stay is comfortable but basic, so don’t expect a TV in your cottage! Ashok is a wonderful host, knowledgeable about the surroundings, makes an excellent banana flambe and homebrews a mean Feni!.

How much time do you need: We suggest staying atleast three days so that you can explore the area at leisure.

What are the top things to do:

The post Why the Dudhsagar region in Goa is much more than just the waterfall appeared first on The reDiscovery Project.