Mt Daraitan is situated between the borders of Tanay, Rizal and General Nakar, Quezon which stands at 2300ft above sea level. This mountain offers several ecotourism and outdoor attractions such as mountains, caves, springs and limestone formations making it a gem at the heart of Sierra Madre. Mt Daraitan is also surrounded by Tinipak River which is one of the country’s cleanest, free-flowing rivers, which are then surrounded by large marble rocks that are great for bouldering.
Mt Daraitan is great place to hike most especially to those who are introduced to hiking. The trail is steep but very established with a total of 1620ft altitude gain equivalent to 1.49km distance from jump off to summit, and I was able to reach the summit in 1h5m. Those who will reach the summit will be rewarded with a magnificent view of the Sierra Madre mountain range and the province of Rizal. It is also a vantage point for witnessing the sea of clouds but unfortunately we did not have the chance to witness it, yet still thankful that we had a nice clearing. The trek is usually a traverse to the "Heart Peak" which then descends to "Tinipak River" for an elevation loss of 1730ft and a total of 5.5km passing through limestones and karst formations which may become slippery during rainy season. 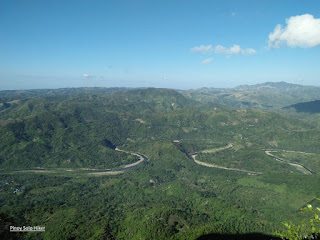 Tinipak River offers a dramatic marble rock formations, which makes this gem a perfect getaway for the weekend. It is located in between boundaries of Barangay Daraitan in Rizal and General Nakar in Quezon Province and is considered the cleanest inland body of water in Region IV.

How to Get There:

Slash Ft. Myles Kennedy & The Conspir…
Trigger Warning: A Chinese Father Sav…
Nike Guest House|| How to spend 2 day…
Florence in One Day: How to Plan the …
Reviews 64 - Transgressions of Power …
1.) Ride a jeepney from EDSA-Shaw to Tanay, Rizal
2.) Take jeep to Sampaloc
3.) From Sampaloc, Tanay. Take tricycle to Brgy. Daraitan