Best Home Sauna To Stay Warm All Wint…
Discover the Magic of Venice in Novem…
Video Premiere: Sue Foley “Southern M…
Garage pour trains portatif
Urban, Suburban, or Rural Practice: P…
The circuit trail has a total distance of 22.3km  and a combined elevation gain of 3300ft under the scorching heat of the Sun. Unlike Cawag, which still has the soothing breeze from the sea, San Jose Circuit can be compared to fellow Tarlac mountain - Mt Damas because the air is dry and relatively no breeze or any gush of wind of all sort.
I joined the event organized by Jaime Dequinon, it was almost canceled because of several scammer-joiners, good thing it still pushed through even though there are only 7 joiners left. A big shout out to Jaime and to the Akyat Mountaineer for continuing the hike and shouldering most of the expenses (we all agree to add some additional event fee to cover for the expenses). We arrived in the jump-off area at around 6am, our guides told us it was rather late if we would do a circuit traverse. They suggested the reverse-traverse trail which would start from the farthest mountain and eventually ends with the nearest mountain.
The start of the trail passes by the man-made Pangasaan Lake (San Pedro Dam), the trail then enters a forested area composts of bamboos where its name originated known as Mt Kawayan. It is composed of a gradual to moderate assault similar to that of Mt Batolusong for a total of 1600ft elevation gain for a total of 7km to reach the summit. The summit is vastly surrounded by trees and bamboos with some portion that offers as a viewing deck. 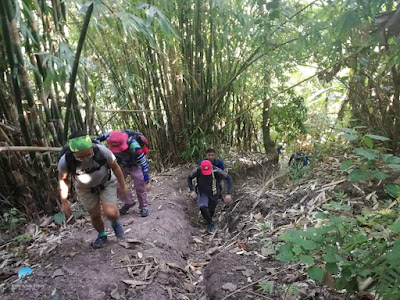 The traverse to Bungkol Baka is characterized by a moderate to a steep descent with some portion comprise of loose soil for a total of 600ft until reaching an open grassland used for grazing cows. Hikers will need to navigate through overgrown "talahibs" until reaching the base of Bungkol Baka which means "Cow's hump" (guides told us it was named as such because it resembles the hump). There is a total of 700ft ascent to reach the summit of Bungkol Baka characterized by a 360-degree unobstructed view. Shout out to Sir Christian Vergara and Carmz Tan, because they have been my constant hiking buddy in the lead group during the hike and also to Reinier Alfante - photographer ko s Bungkol Baka). 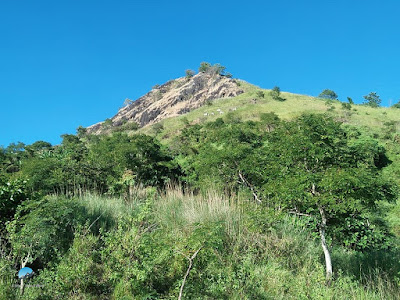 The traverse from Bungkol Baka to Mt Tangisan is the longest part of the trail, the two summits are almost 9 km apart which includes a total descent of 1500ft. Halfway of the trail, we passed by a spring where we refilled our water containers and took our late lunch.
Fast forward, Sir Christian, Carmz, and I throttled towards the summit of Tangisan. It was characterized by a very steep ascent overlooking the picturesque view of Pangasaan Lake for a total of 1050ft elevation gain. Flowering plants and Ornamental trees are present along the trail and I can't recall if there are pine trees (2 years ago and I have a serious issue of memory gap).
We reached the summit surrounded by huge rocks and it is characterized by an unobstructed view of the surrounding landscape that includes the three mountains from SJC, a river, Pangasaan Lake, and Mt Damas from afar. We waited for our teammates to arrive, but after almost an hour, we have decided to descend and head back to the registration. Fortunately, we met our teammates on their ascent on the way to the summit. We took another group photos and proceeded with the descend so we can clean ourselves and take a good rest and the three of us were able to finish the circuit trail in almost 9 hours. 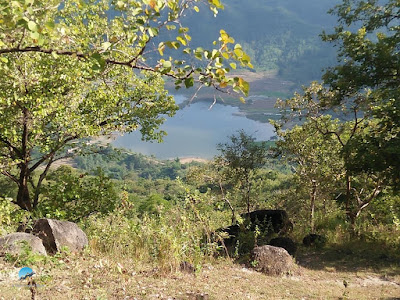