Located in Ilocos Sur which is situated beside Bessang Pass in Cervantes, Mt. Namandiraan is the highest peak in the province of Ilocos Sur which stands at 7648ft above sea level. It is also the highest point where one can set a camp in the whole Ilocos Region. I asked the local tour guides regarding how this mountain got its name. According to them, Namandiraan's name may have originated from the word Bandila (flag) when the Commonwealth flag was raised in this mountain during the 1930s. This mountain also witnessed the "Battle of Bessang Pass" which is considered as one of the greatest battles won by Filipinos.
This is one of my dream climbs because of its historical significance and of course its sheer beauty. But my first two Namadiraan climbs were canceled due to lack of joiners (most people would not join an event unless they have heard about it, otherwise it is not appealing to them). Due to diligence and persistent searching for Namandiraan's event I was able to join an outreach hike by DHAMO for "Baby Blue", and I was so thankful that it was a hike for a cause, not to mention with much affordable event fee.

Cervantes is considered as the Summer Capital of Ilocos Sur, so it's no wonder that we are already around 4980ft elevation above sea level. We arrived in Bessang Pass at around 10am, then we started our hike at 10:30am. The start of the trail is composed of a cemented pathway with a surprising 1100ft altitude gain for almost 3.5km of trek until reaching a village where we took our lunch. After we had our break, we then descended a very steep river valley for about 1200 ft. which somehow resembles Akiki trail's steepness through a myriad of Pine trees. We then reach Ballay river characterized by strong flow of water making it almost impossible to river cross and the only option was to cross through a makeshift bridge made from a fallen Pinetree which is less than a foot in diameter. Honestly, it offers no room for mistakes, otherwise, you'll end up on a stretcher.  After we have regrouped at the lead team, we started to enter and ascend a mossy forest for 2900ft elevation gain that resembles the trail that of Kalawitan and also consists of limatiks but not as aggressive compared from other mountains or so I thought it was. Together with the lead group, I was the third to arrive at 4:30pm after 6hours of trekking for a distance of 10km and a total combined elevation gain 4000ft to reach the summit. Being the first to arrive gives you the luxury to choose the best spot, so I did set my tent at my preferred spot. The summit was filled with Limatiks and unknowingly many have crept unnoticed in my bag and inside my tent. While I was asleep these little bloodsuckers had a feast, I had several bites in my face, hands, and feet I would only realized when I woke up. It rained so bad that night, we were worried that some of our groupmates were caught in the heavy downpour, it made the trail slippery and infested with Limatiks which extended their hike to 11hours, some arrived at 10pm and they later realized that they are dealing with an 8/9 difficulty, but in my opinion, Namandiraan is between 6-7/9 level of difficulty made worse by the rain.

The next morning, I was so excited to check the summit and it's surrounding view. I was honestly expecting a sea of clouds and I was dismayed at first but then I was still thankful for the clearing and the good weather that day for a chilling hike. We then started to descend, and I've decided to join the sweep since I want to know other hikers and their stories. But as the trek goes on, I was slipping past each hiker then I would later find myself with the lead group again.

The descend portion of the trail is actually more picturesque as compared to that of the ascend (regular traverse). From the summit towards Sitio Namita there is a total of 5800ft elevation loss passing through rolling terrains for peak 4 to 7 and passing a myriad of Pine forest that is composed of the final 2000ft descend for a total of 14km. The trail is simply mesmerizing, it also passes thin ridges, knee busting steep descend, rice terraces, river crossing, pine forest that are covered with moss, and of course the remarkable Kay-Ang Rock (a noticeable landmark which also serves as photo ops spot). We have also scaled a very thin knife-edge ridge composed of slippery rocks which are about a foot in diameter with vertical drops at both side.

Special mention to Chino Moreno who eventually became my hiking buddy during that time. We were able to finish the descend in less than 6hours (5h30m with multiple regroups included) towards Sitio Namita. We then hire a trike (a total of 18km) to bring us back to Bessang Pass and arrived at around 4pm. We were lucky to witness the sunset/sea of clouds unfold around Besang Pass. We at the lead group were to able hang out and do some socials at Bessang Pass. We waited for quite a while but due to injuries most of our teammates arrived at around 11:30pm. I was not able to go to work the next day because we arrived in Cubao at around 10am but it's all worth it. 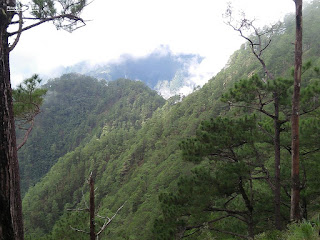