Yes, it’s non-stop Mardi Gras here. I doubt this will be of interest to many but if you DO have a CRV – and your gaiter is looking a little tatty – it may come in handy.

Firstly, the old boot. After eight years it’s starting to fall to bits.

Highlands, Buttermilk Opening and Sum…
Africa to be the “Game Changer” of th…
Content is King and a Multilingual Bl…
TerraVita CBD Review Copy
‘Tights not Obligatory’ says Theatre …

And this is what the new one looks like straight out of the packet. Procured from eBay it cost less than seven quid and is leather – unlike the original.

A little bit of research – I.e. google – brought me to the Crv Owners Forum whose members have posted some excellent advice on the procedure to be followed. Without this I wouldn’t have known where to start but it’s quite straightforward – once you know.

First the aircon control panel that sits above the gearstick needs to be removed. A thin bladed screwdriver at either end unclips it. A further clip at the top and the unit is free bar the cabling. I unplugged that too so the unit wasn’t dangling in the way and putting stress on the rather delicate looking wires.

The plastic panel holding the boot can then be unclipped by hand. Once free, I held the collar of the Gear Knob underneath and unscrewed the knob allowing the whole unit to come away. 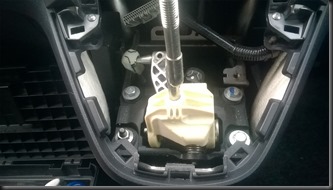 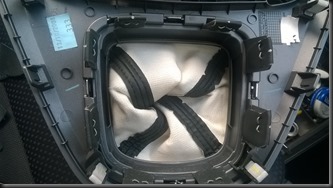 The legs of the boot are stapled to plastic lugs. A combination of a small screwdriver and long nosed pliers removed these. 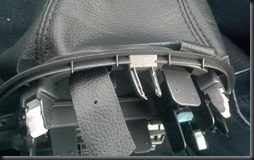 To ease fitting of the new boot the bright surround was unclipped – this made it easier to feed the legs of boot through. Once the legs were all through the surround was clipped back in place after ensuring the boot was level. The legs were the folded over the plastic lugs and stapled in 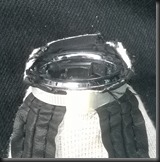 place. I use a domestic stapler which worked fine and penetrated the plastic and leather easily, although the staples were only just long enough to fold over on the other side.

The boot is secured to the collar of the gear knob by a cable tie. I didn’t have one to hand and the old one wasn’t reusable so I used a length of wire tightened with pliers which should last until I get around to doing it properly.

The unit was then lowered over the gear stick, and the gear knob screwed back on whilst holding the collar underneath. Then it was just a matter of clipping that and the air con controls back into place. Job done in less than an hour, again thanks to the excellent advice on the CRV owners forum.