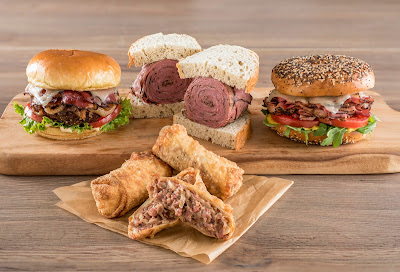 Binance Celebrates Multiple Fait Gate…
The Ultimate Winter Bucket List Accor…
Royal Palace Rugs
Faces in the Crowd: D.A. Pennebaker
FLYING HIGH
As the busiest time of year in Florida begins, TooJay’s also launches an engaging new loyalty program.
Calling All Pastrami Lovers
True to its heritage of serving plentiful plates of traditional favorites, TooJay’s famous “pastrami on rye” features tender, smoky, sliced-to-order hot pastrami served on fresh rye bread. In addition to the classic deli sandwich, this year’s month-long pastrami celebration also features a homemade pastrami bagel, a pastrami sandwich, a pastrami egg roll and a pastrami burger, all of which are sure to be a pastrami lover’s dream-come-true.
“There are traditional cuts of meats which are synonymous with great gourmet delis! Pastrami is the quintessential favorite for many of our loyal guests,” said Chris Artinian, president and CEO of TooJay’s. “While the country celebrates pastrami for one day, we celebrate it for an entire month. Our pastrami is simply that great. We look forward to celebrating Pastrami’s deliciousness with our loyal guests and Pastrami enthusiasts.”
New Loyalty Program Rewards Fans
Also in January, TooJay’s launches a new loyalty program called “Delicious Rewards” to thank guests who dine with them often. Sign up between January 9 and February 19 and enter the promo code “Pastrami” to receive one of TooJay’s featured pastrami items for free.
Founded in 1981, TooJay’s has grown to 28 restaurants throughout Florida and currently serves guests in Palm Beach and Broward counties, the Treasure Coast, the West Coast of Florida, the Orlando area, The Villages, the Space Coast and Polk County.
TooJay’s is ranked eighth in the country for Family Dining by Consumer Reports and received the 2016 Best of South Florida Award for Best Deli from theSun Sentinel. For more information about TooJay’s, visit TooJays.com. Follow TooJay’s at twitter.com/therealTooJays and instagram.com/toojaysdeli or visit the Facebook fan page, which has over 60 thousand fans, and become a fan at facebook.com/TooJaysDeli.

There’s a birthday party today. Where is this feeling coming from?