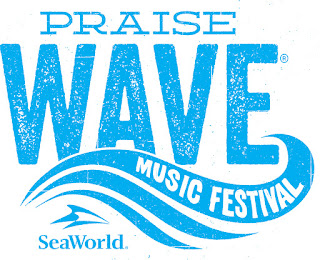 ORLANDO, Fla. (January 5, 2017) – Christian music fans will kick off the year with a day of fellowship and fun during SeaWorld Orlando’s Praise Wave concerts Saturdays January 14 through 28.
Guests can enjoy live performances by some of the hottest names in Christian music and celebrate in an atmosphere filled with Christian friendship, thrilling rides and attractions. 2017 musical performances include:

Live concerts take place at 1:30 p.m. and 4:00 p.m. each Saturday in the park’s Nautilus Theater and are included with park admission. Reserved seating packages for all performances are available online at SeaWorldOrlando.com and start at $19.
Live musical performances at the park continue in February with the debut of the Seven Seas Food Festival. Complete with a brand new array of unique drinks, desserts and street-festival inspired food, the Seven Seas Food Festival will also feature fan favorite artists for 14 consecutive Saturdays.
The best deal for guests to experience Praise Wave, and all of SeaWorld’s special events throughout the year, is with a SeaWorld Fun Card which includes unlimited admission with no blockout dates thru December 31, 2017. For more information and to purchase tickets visit SeaWorldOrlando.com.
Follow us on Facebook, Twitter and Instagram for the latest details about SeaWorld Orlando’s events. Join the conversation by using #SeaWorld #PraiseWave.
SeaWorld Entertainment, Inc.
SeaWorld Parks & Entertainment™ is a leading theme park and entertainment company providing experiences that matter and inspiring guests to protect animals and the wild wonders of our world. The company is one of the world’s foremost zoological organizations and a global leader in animal welfare, training, husbandry and veterinary care. The company collectively cares for what it believes is one of the largest zoological collections in the world and has helped lead advances in the care of animals. The company also rescues and rehabilitates marine and terrestrial animals that are ill, injured, orphaned or abandoned, with the goal of returning them to the wild. The SeaWorld® rescue team has helped more than 29,000 animals in need over the last 50 years.
The company owns or licenses a portfolio of recognized brands including SeaWorld, Busch Gardens® and Sea Rescue®. Over its more than 50-year history, the company has built a diversified portfolio of 12 destination and regional theme parks that are grouped in key markets across the United States, many of which showcase its one-of-a-kind zoological collection of over 800 species of animals. The company’s theme parks feature a diverse array of rides, shows and other attractions with broad demographic appeal which deliver memorable experiences and a strong value proposition for its guests.
SeaWorld Parks & Entertainment is a wholly owned subsidiary of SeaWorld Entertainment, Inc., a publicly traded company.