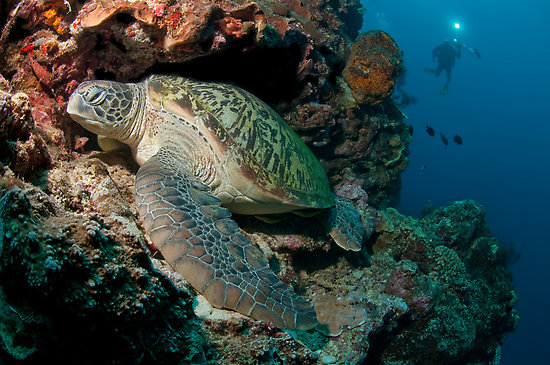 The Bunaken National Marine Park was formally established in 1991 and is among the first of Indonesia's growing system of marine parks. The park covers a total surface area of 89,065 hectares, 97% of which is overlain by sparkling clear, warm tropical water. The remaining 3% of the park is terrestrial, including the five islands of Bunaken, Manado Tua, Mantehage, Nain and Siladen. Although each of these islands has a special character, it is the aquatic ecosystem that attracts most naturalists.

NBA Jam Game Comparison
What do the Great Commission and plas…
Police Identify Frank R. James As Per…
iHerb Lower prices
How to Soften a Beard: 6 Effective Ti…
The waters of Bunaken National Marine Park are extremely deep (1566 m in Manado Bay), clear (up to 35-40 m visibility), refreshing in temperature (27-29 C) and harbor some of the highest levels of biodiversity in the world. Pick any of group of interest - corals, fish, echinoderms or sponges - and the number of families, genera or species is bound to be astonishingly high. For example, 7 of the 8 species of giant clams that occur in the world, occur in Bunaken. The park has around 70 genera of corals; compare this to a mere 10 in Hawaii. Although the exact number of fish species is unknown, it may be slightly higher than in the Philippines, where 2,500 species, or nearly 70% of all fish species known to the Indo-western Pacific, are found.
Oceanic currents may explain, in part, why Bunaken National Marine Park is such a treasure trove of biodiversity. Northeasternly currents generally sweep through the park but abundant counter currents and gyros related to lunar cycles are believed to be a trap for free swimming larvae. This is particularly true on the south side of the crescent-shaped Bunaken Island, lying in the heart of the park. A snorkler or diver in the vicinity of Lekuan or Fukui may spot over 33 species of butterfly fish and numerous types of groupers, damsels, wrasses and gobies. The gobies, smallish fish with bulging eyes and modified fins that allow them to attach to hard surfaces, are the most diverse but least known group of fish in the park. 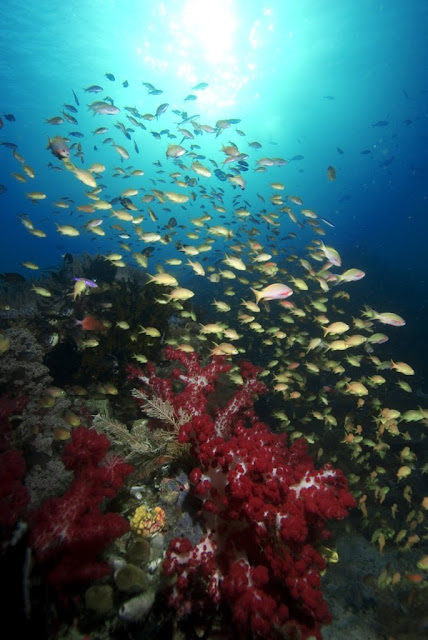 Biologists believe that the abundance of hard corals is crucial in maintaining the high levels of diversity in the park. Hard corals are the architects of the reefs, without them, numerous marine organisms would be homeless and hungry. Many species of fish are closely associated with particular types of corals (folious, branching, massives, etc.) for shelter and egg-laying. Others, like the enormous Bumphead Parrotfish, Balbometopon muricatum, are "coralivores" and depend on hard corals for their sustenance. Bony mouth parts fused into an impressive "beak" allow these gregarious fish to crunch corals like roasted peanuts.
Some 20,000 people live on the natural resources of Bunaken National Marine Park. Although there are inevitable conflicts between resource protection and use by people, the Indonesian government is taking a fairly unusual and pragmatic approach to park management. The idea is to promote wise resource use while preventing overexploitation. Local communities, government officials, dive resort operators, local nature groups, tourists and scientists have played an active role in developing exclusive zones for diving, wood collection, fishing and other forms of utilization. Bunaken Marine Park has become an important example of how Sulawesi, and the rest of Indonesia, can work to protect its natural resources.

Bunaken Island offers a plethora of wall experiences for visiting divers. Everyone has their favorite site and mine is Lekuan 2. Judging from the number of divers who frequent the site, many agree with me. The reasons are obvious immediately upon entry. You can't help but notice the high concentration of schooling fish from the drummers and fusliliers that greet you as you begin your descent, the blizzards of brightly-colored anthias you pass along the edge of the reeftop, continuing to fall through the clouds of pyramid butterflyfish and bannerfish underneath. The variety of reef fish is astounding: you could pick out over 20 species of butterflyfish alone if you so desired.
The start of the traditional dive offers small treasures as candy crabs frequent the beautiful soft corals in the area, often adorning themselves with a sprig of live soft coral they've affixed atop their head. The faerie crab, a fingernail-sized squat lobster that's pink and hairy can be found by a discerning eye peering among the outer folds of barrel sponges. But don't become engrossed with the macro life so much that you miss any of the larger residents: sharks that pass you by below your fins, napoleons wrasse or bumphead parrotfish above you, or turtles out in the blue off the wall.
Toward the end of the site, the Lekuan point, the current predictably picks up just as you notice the schools of redtooth triggerfish around you. Sharks enjoy the current as well, often coming up to only five meters in depth to cut over the point to Lekuan 1. Resident napoleons, giant trevally, jacks, batfish and solitary giant barracuda are predictably seen along this stretch, but smaller denizens such as leaf scorpionfish are common as well, keeping your attention divided between the lush wall and the blue ocean.
With the wall going from only 2-5 meters along the top to 50-70 meters along the bottom, where a narrow shelf exists before the wall continues to plunge into the abyss, you can alter your depth to find an entire new set of attractions dive after dive. Boredom is definitely not an option.
Bruce Moore
Source:
"What's Happening?" - Manado Safari Tours Newsletter