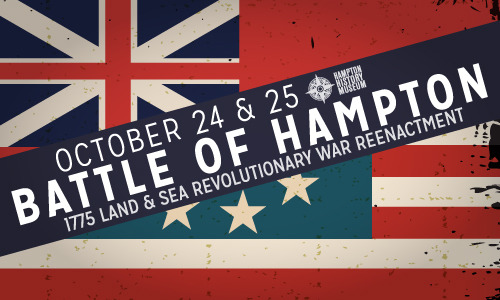 The Hampton History Museum will present the first-ever reenactment of the Battle of Hampton on Saturday, October 24 from 10 a.m.-4 p.m. and Sunday, October 25 from 10 a.m.-3 p.m. in and around downtown Hampton’s waterfront and parks.

The two-day event will bring to life the land and sea battle that started the Revolutionary War in Virginia.

“This truly will be a unique reenactment experience," said Luci Cochran, executive director of the Hampton History Museum. "It won’t be a fight between two armies in a remote field somewhere. This is a land and sea battle, with colonists fighting from the shore, and the British firing cannons onto the shore from ships in the harbor, and close combat in the city’s streets.”

Nearly 100 re-enactors will portray troops involved in the battle. Patriots will clash with a small flotilla of period boats determined to land British Redcoat determined to burn Hampton to the ground.

“The Battle of Hampton, which occurred on October 26-27, 1775, marked the beginning of revolutionary warfare in Virginia. Six months had passed since the battles of Lexington and Concord, but blood was not shed in Virginia until fighting started between Virginia patriots and forces aligned with Britain," says Mike Cecere of the 7th Virginia Regiment, the hosting reenactment group.

Both days begin at 10:00 a.m. with activities at both the British and patriot’s camps in Mill Point Park. Visitors will get to hear both sides of the story, experience daily life of the soldiers, and be invited to participate in activities including muster and drill.

Review: ‘The Battle At Garden’s Gate’…
Reviews 62 - Battle Ground by Jim But…
What is Cybersecurity and Why it Matt…
Kingdom Hearts Series Coming to PC on…
HOW TO STOP OVERTHINKING


This post first appeared on The Coastal Virginia-Hampton Roads Experience, please read the originial post: here
People also like
Review: ‘The Battle At Garden’s Gate’ Greta Van Fleet
Reviews 62 - Battle Ground by Jim Butcher - Dresden Files #17
What is Cybersecurity and Why it Matters
Kingdom Hearts Series Coming to PC on Epic Games Store, Will Sell At Full Price
HOW TO STOP OVERTHINKING
The Stoic Physician