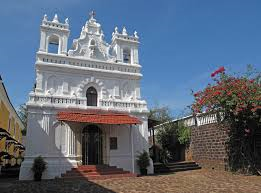 Teracol was a key Portuguese fort for the defense of Goa, on the north side of the estuary of the Teracol River, the most northern boundary of Goa. Hyped as one of the state's most atmospheric historic monuments, it turns out to be little more than a down at heel country house recently converted into a low-key luxury hotel. Decorative turrets and dry moat with commanding views of the estuary and ocean mark the fort. 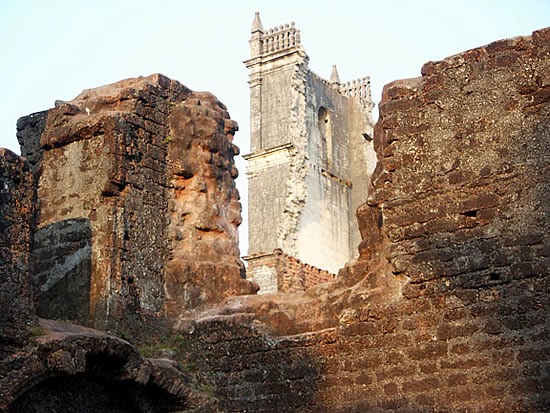 The Church of St Augustine was constructed by the joint efforts of 12 Augustian Friars after they arrived in Goa on 3rd September 1572 AD. They built the church on the Holy Hill at Old Goa. The construction of the church was completed by 1602 AD. A ban was imposed by the Portuguese government   against the Augustines. The church and the convent thereafter were deserted.
The ruins of 46-metre high Bell Tower without the bell can be seen from some distance and attract attention of visitors. Five storied arched belfry tower built of laterite formed part of facade of the church facing east. This tower is one of the four towers of St. Augustine Church. The Church had eight richly adorned chapels and four altars and a convent with numerous cells.  The ruins of chapels, altars and extensive convent with numerous cells can be seen even today around the tower. The bell was first   placed in the Fort Aguada Light House, where it remained from 1841 to 1871 AD. Finally it was put in the church of Our Lady of Immaculate Conception at Panaji in 1871 AD and it is still in working condition. 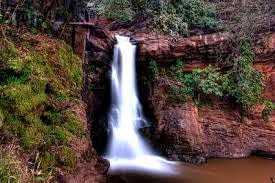 The Arvalem or Harvalem waterfalls, which cascades down from the mountains, from a height of 50 metres, is one of the most awe-amazing spots. It is situated at about 2 km from the small town of Sanquelim and 8 km from Bicholim, in North Goa.

The Arvalem Waterfall is a very scenic and beautiful picnic spot. This charming waterfall is a mind-blowing experience, with Rudreshwar temple in its vicinity. The temple holds importance for the Hindus who believe in releasing the soul on the 12th day after death.

While leaving the temple of Rudreshwar, one can descend the staircase to look at a majestic waterfall shedding its exuberant silvery showers. The beautiful Arvalem fall, with a head of about 24 feet high, forms a sizeable lake at the bottom, which offers a sizeable temptation to seasoned swimmers.

The best time to visit this site is just after the copious monsoon when it presents a rapturous, ravishing and riotous aspect. The water flow here during the monsoon is quite less. It has a lot of greenery all round with fruit laden trees with various fruits such as bananas, bread fruits and coconut palms to name a few.

The ancient caves in the vicinity adds a touch of antiquity to this picturesque place, which finds a major attraction for the film makers as a favourite shooting spot. The Rock cut caves are just situated nearby. The Government has also developed a park from which the view of the waterfall can be peacefully relished.

Discover the Magic of Venice in Novem…
Homemade Root Beer Float Popsicles
Why I Chose to Be Vaccinated Against …
Puzzle 1000 pièces - Tower Bridge, Lo…
“The Friend Who May Not Seem a Friend…


This post first appeared on TRAVEL CRAZY, please read the originial post: here
People also like
Discover the Magic of Venice in November
Homemade Root Beer Float Popsicles
Why I Chose to Be Vaccinated Against COVID-19
Puzzle 1000 pièces - Tower Bridge, Londres
“The Friend Who May Not Seem a Friend” – The Cat and the Fire, Post 2 of 3
Apple Discontinuing iMac Pro, Making Way For 2021 Redesign?
How To Run a Beauty Salon And Not Lose Your Own Beauty
ALBUM: Sun-EL Musician – To The World And Beyond
Gulf Islands – On Foot – Part 2