Tags: cave kanger valley national
May 29th 2013
View original
Dandak Cave
(A blog by Jitendra Nakka)
Introduction
Bastar is the king of adventures, king of thrill in Chhattisgarh. Bastar is the home of some of the most exotic destinations of Central India and can provide some of the most virgin endeavours on most spellbinding terrains of Central India, one such place is Dandak Cave which comes in the kotumsar sub-range of forest at Kanger Valley National Park. 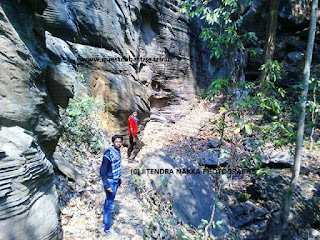 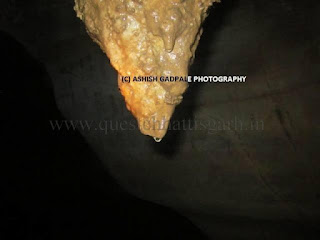 Figure showing textbook example of Cave Pop-corn
Where and How to reach?

Dandak Cave comes in the Kanger Valley National Park area, whose entrance(Kanger Valley barrier) is  nearly 26 kms from Divisional Head Quarter Jagdalpur on Jagdalpur-Hyderabad Highway (NH-221). Its nealy 326 kms from C.G State capital Raipur, nearly 326 kms from Vishakapatnam. The nearest railway station is Jagdalpur. The nearest airport is Raipur. Jagdalpur is one of the premium destinations for tourists as it offers exciting tour packages for tourists all round Central India. There are numerous luxurious hotels and motels in Jagdalpur which provide such packages. 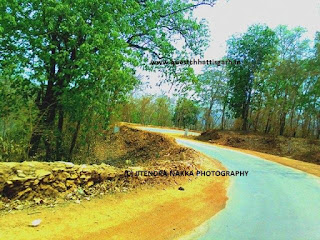 Way to Kanger Valley
Being in Dandak Cave:
Dandak is one of the most well-maintained cave of Kanger Valley National Park, as the curious tourist will surely get the textbook examples of every cavern structures. Here just after the cave we can see the helictites, followed by the classic examples of soda straws on the opposite wall of helictite.
Going few feets down, the narrow entrance opens into a large chamber showing exotic examples of flowstones in a couple of dripstones. This chamber is as big as it can hold more than 500 tourists at a single
span of time. On one of the adjacent wall nearby, we can see a very very narrow entrance for the second chamber series of cave. 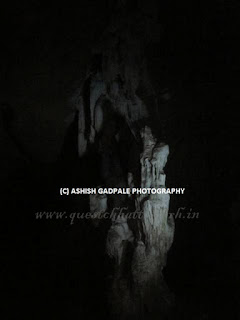 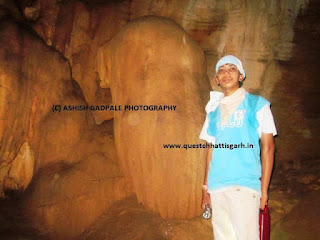 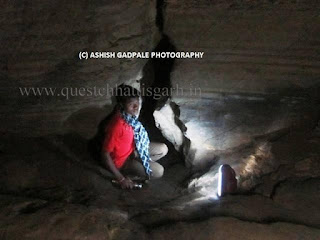 The second chamber series of this cave has ultimate narrow entrance but opens into a big room performing a beautiful play of stalactites, stalagmites and few rare textbook examples of cave popcorns  and soda straws with a central large stalagmite and stalactite. Here this stalagmite seems like to have grown from a 70 feet deep sinkhole which is just next to this central stalagmite. Going further forward,we can see many small chambers, some are inter-connected while some possess dead ends, but on the whole all the chambers were having dead end after few feet.
Addition to its Importance:

This cave is one of the favourite spot for researchers as this cave provides a perfect climate for researchers to read the palaeo and present climate on the basis of living fauna and fossils. Dr. Jayant Biswas, Founder and President of "National Cave Research and Protection Organization, India" has published a lot of research papers some of which has been published in some of the most reputed publishing houses of world like Speleologija(1) e.t.c. He has worked a lot for cave-biology. On the basis of fauna found here, he has named cave fauna as cavernicoles (cave organisms) and divided them into three types :


(A) Troglobites: Species which live wholly and permanently in the dark zone of caves. Mostly are albinic because camouflage colouring is of no use.

(B) Troglophiles: Species which live permanently in the dark zone, some of which can live in a suitable habitat away from the cave.

(C) Trogloxene: Species which visit or take shelter but do not complete their whole life cycle in caves. They go to the outer world periodically for some requirements, usually food. Further it can be divided as accidental trogloxene and habitual trogloxene. The affix terminology is sufficient to recongnize them.(2) 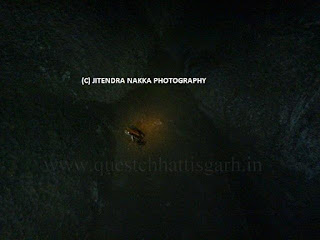 Pic showing a frog dwelling inside Dandak cave
The cave has got its name after the division’s ancient name “Dandkaaranya”. Dandak was a demon who got cursed by a teacher (sage) of demons “Shankaracharya” and got his kingdom turned into dense forest within a fraction of time along with himself.
This cave is known for its most spectacular show of speleothems formations with some outstanding example of fauna which likes to live inside cave only. This phenomenon has given this cave special attention and preference among the researchers to deeply analyze the palaeo and current climate of the cave.

Conclusion:
This cave proves to be one of the most promising cave for cave researchers and speleologists. And for young guns, this cave is an ideal example for reading textbook examples of cavern structures.