On the middle of the Tayabas Bay and Sibuyan Sea lies the heart-shaped and beautiful Island of Marinduque. Its waters are located along the center of the center of world’s marine biodiversity. Not only a sanctuary for marine, flora, and other fauna species, Marinduque is also home to one of the oldest religious festivals in the whole Philippines. 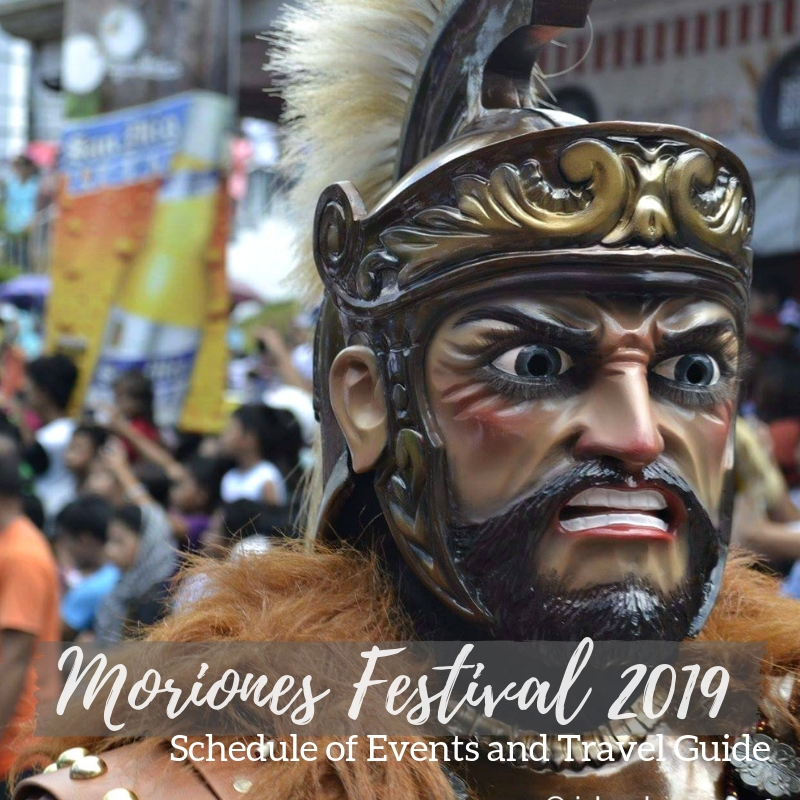 For more than 130 years now, the province celebrates the famous Moriones Festival annually during the Lenten season. The festival features men and women dressed in costumes, masks, and helmets replicating the garb of the ancient Roman Soldiers during the biblical times.
The festival depicts the story of Saint Longinus who was a Roman Centurion and blind on one eye. It was believed that Saint Longinus was the one who pierced the side of Jesus during his crucifixion, and that the blood that spurted and touched his eyes restored his sight. This made him convert to Christianity but eventually led to his decapitation by his former fellow centurions. 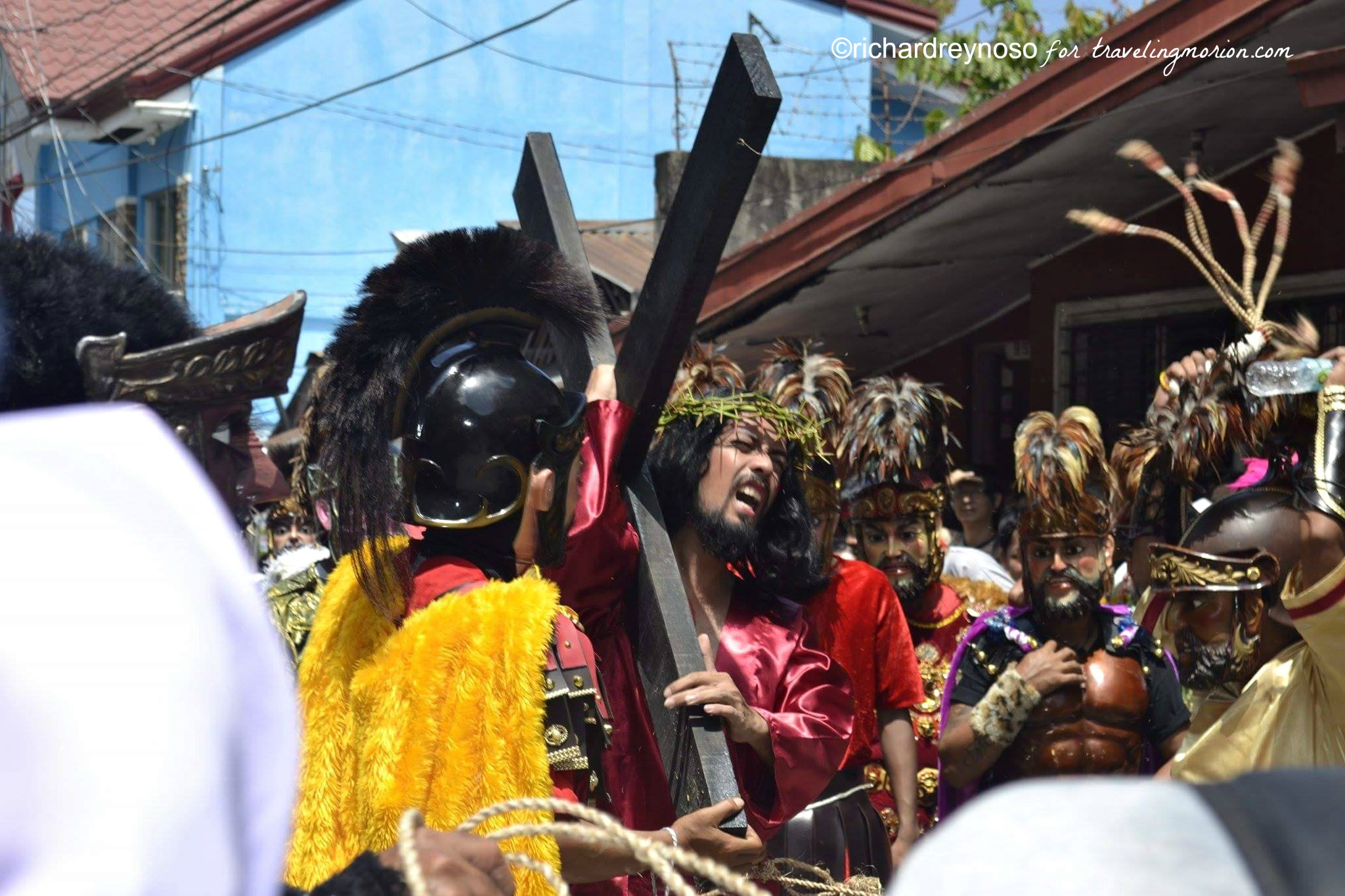 Calendar of Activities
Activities are normally held during the Holy Week with the week-long festivities culminating with the Salubong on Easter Sunday. This 2019, it is expected to run from April 14 to 21 with Mass and other Religious activities filling the schedule.
The Via Crucis or the Way of the Cross on the Streets happens on Good Friday. This is followed by the Senakulo which depicts the beheading of Saint Longinus on Black Saturday. And lastly, the Salubong on Easter Sunday.
Travel Notes 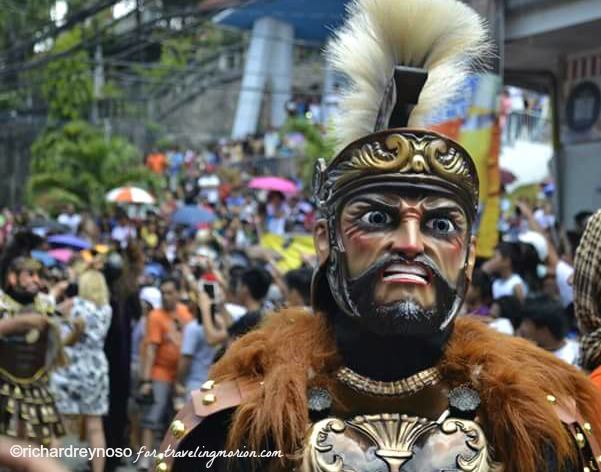 Where to stay
There are a number of Hotels in the province but if you want to be near the center of the celebration during the Festival it is advisable to stay in Boac or Sta. Cruz and other neighboring towns. There are also a lot of island resorts and hotels in the province if you’re looking for the ultimate Holy Week vacation
What to Wear
The festival is held during the Holy Week and the Philippines being a tropical country, it is expected that the weather during those times will be scorching hot. It is advisable to wear loose or comfortable light colored clothes and bring water with you to avoid dehydration.
Other things to do in and Interesting Spots in Marinduque
Pasalubong
Aside form souvenir centurion masks, arrowroot cookies and pansit miki (from Sta Cruz); and hand loom-woven buntal products like place mats, table runners, bags, wallets, and curtains (from Bonliw, Torrijos) are the best pasalubongs from the province.
Must Try
Manakla is a local variety of crayfish abundant in Barangay Malinao, Bonliw, and Suha in Torrijos. Usually steamed, fried or cooked in soda/coconut milk, your visit to the "Heart of the Philippines" wouldn't be complete without tasting Manakla
Bibingkang Pinahiran is oven-cooked sticky rice spread on top with thick sweet sauce made from caramelized brown sugar. You can buy/taste the original recipe in Barangay Bonliw (Torrijos). This kakanin is also available in the public markets of Torrijos and Santa Cruz.
How to Get There
Marinduque can be reached via land + sea travel. There are no airline companies offering a trip to the province as of this writing.
From Metro Manila
Option 1: From Metro Manila, ride a bus bound to Grand Central Terminal of Lucena City (Quezon) where passenger jeepneys and tricycles bound to Talao-Talao Port are available.
Option 2: To avoid the hassle of transferring from one transport to another, better to find buses with direct route to Talao-talao (Dalahican) Port. Travel time from Metro Manila to Talao-talao Port is approximately 3-4 hours depending on traffic in Laguna and Quezon.
Option 3: You can also ride a direct bus trip bound to Marinduque. Jac Liner has regular direct RORO Bus trip to Marinduque departing at 4:00PM (3:00Pm boarding time) in Cubao terminal.
Check their latest schedules and updates here: https://www.jacliner.com/routes.html.
From Oriental Mindoro
A large outrigger boat leaves daily at 8:00AM in Pinamalayan, Oriental Mindoro going to Gasan, Marinduque. Fare is Php250 and travel time is 3-4 hours depending on the weather.
From Visayas and Mindanao
Take an airplane ride going to Manila or Clark. Then follow instructions above.
*** Schedule of Events and Activities posted above are unofficial and was based from the previous year's events and activities. This will be updated once the official Schedule of Activities and Events was released by the organizers.
*** Photographs contributed by Richard R. Reynoso
_______________________________________________________________________________________________
Follow TRAVELING MORION's Journeys and  Travels
Twitter| @travelingmorion
Facebook Page| Traveling Morion
Instagram | @travelingmorion
morionworld.blogspot.com